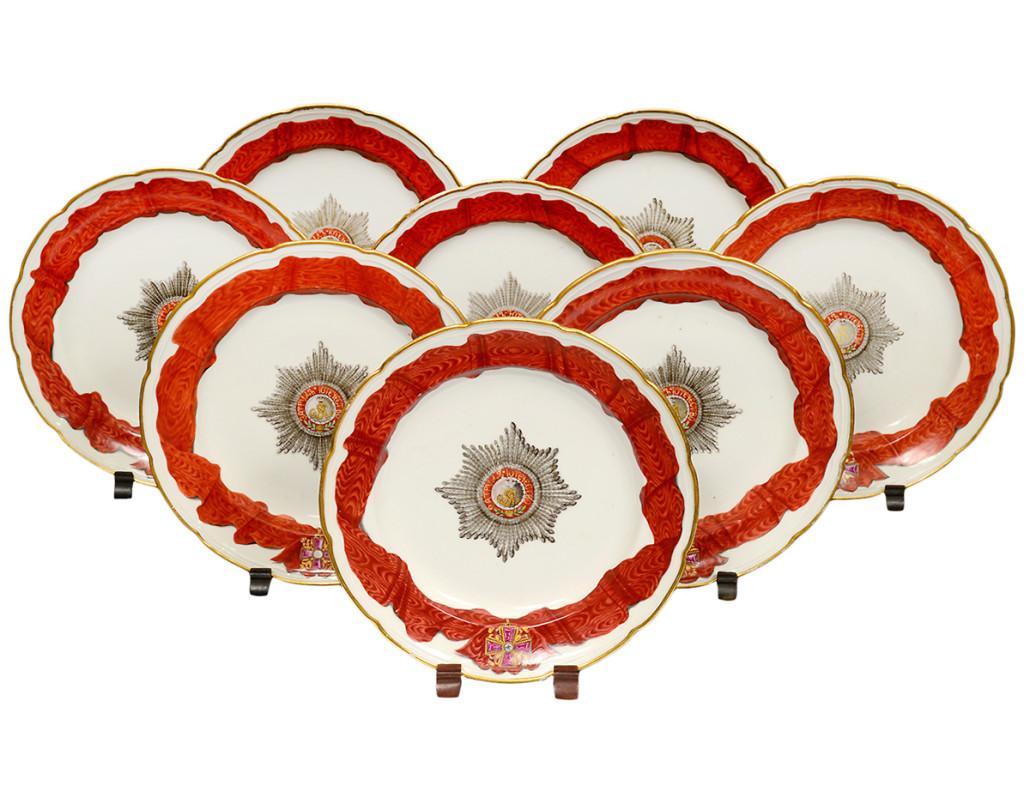 WEST PALM BEACH, Fla. – On Monday, October 19, Auction Gallery of the Palm Beaches (AGOPB) will present rare and fascinating items from a Palm Beach private collection in their Fall Art and Antiques Auction. Absentee and Internet live bidding will be available through LiveAuctioneers.

The featured collection includes 18th-century Russian Imperial porcelain, Chinese antiques, early Russian and Greek icons, and some of the most interesting objects the gallery has ever seen.

The Russian Imperial porcelain was made by the Gardner Factory between 1778 and 1780 for the Order of St. Alexander Nevsky. The service will be offered in three consecutive lots, Lot 106 with eight plates (shown above), Lot 107 with eight bowls, and Lot 108 with a pair of reticulated fruit bowls. Additionally, there is Lot 105, a group of three Gardner cups and covers, one set being from the Order of St. Alexander Nevsky service. Gardner porcelain is highly desirable and always of particular interest to Russian collectors.

“The porcelain is of exquisite quality,” said AGOPB partner Leslie Baker. “Catherine the Great was so impressed by the Gardner factory, she commissioned three large services in 1777. The factory’s owner, an Englishman named Francis Gardner, had expert knowledge of the different techniques for decorating porcelain. In addition to underglazed and overglazed designs, the factory also added transfer prints, colored lusters, and relief compositions to their wares.”

There are several early Greek icons in the featured collection, as well. Lot 156 is a 17th/18th-century triptych painted with the Virgin and Child and flanked by St. George and St. Demetrius; while Lot 157 (shown below), is a 17th-century icon depicting a trinity of angels seated around a table with holy figures making offerings. The latter work is large, measuring 42¼ by 32½ inches. 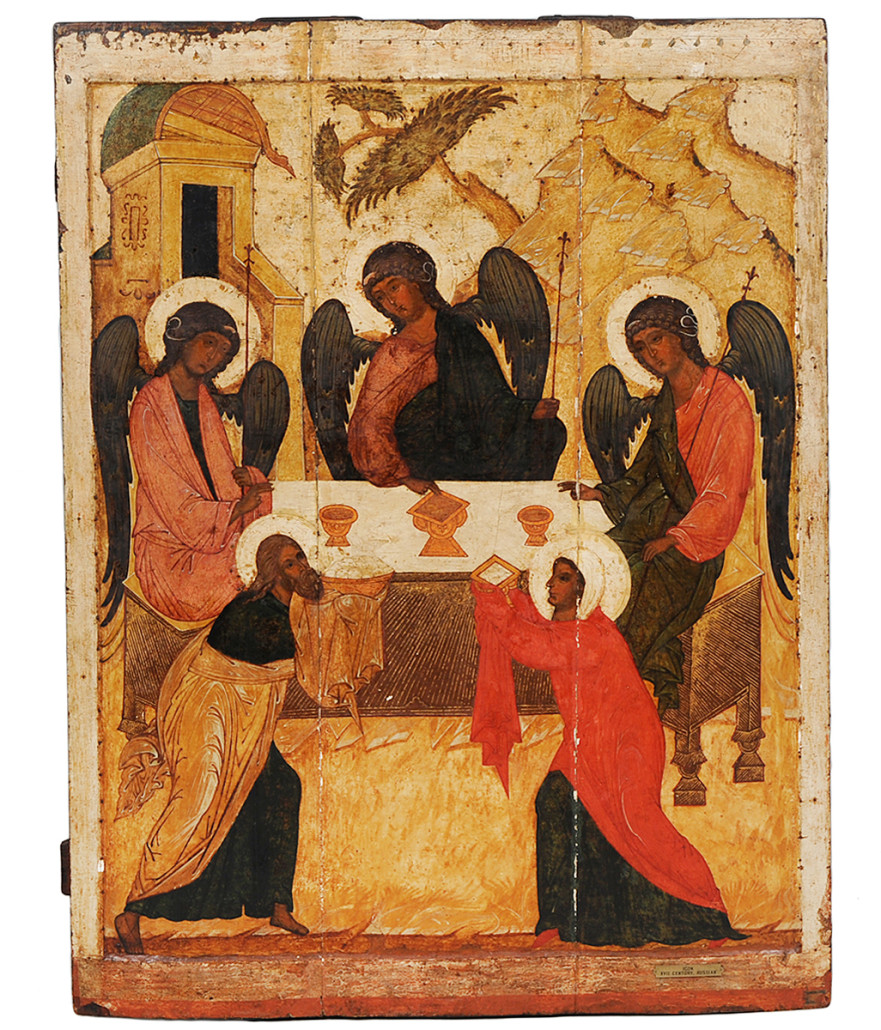 Lot 204 is an 11th- to 12th-century Byzantine religious chalice made of enamel, silver, sardonyx and semiprecious stones. There are inscriptions around the foot of the chalice and four round enameled panels with depictions of saints. Some of the stones are missing and the cup shows some wear from age, but overall it is a wonderful example of Byzantine religious art. For comparable examples of Byzantine chalices, one needs to look no further than the Treasury of San Marco in Venice, where some of the most valuable examples of Byzantine art are held. “With the recent visit by the Pope and the heightened collectors’ market for these types of pieces, the chalice’s up-to-date market value will be established at auction,” Baker said. 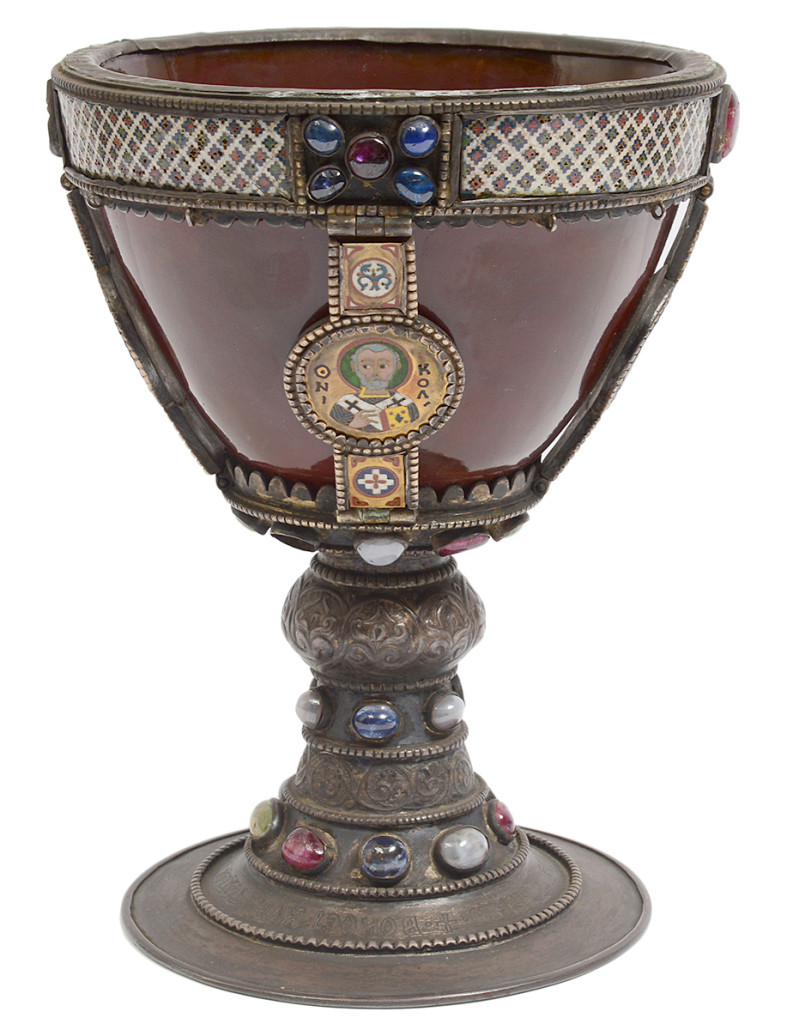 Another beautiful item is Lot 206, shown below, a contemporary 18K yellow gold and lapis lazuli automated musical mantel clock with precious stones. It is a scaled-down version of the famous Delacorte clock on the triple archway near the children’s zoo in New York’s Central Park. The Delacorte clock is one of the park’s most amusing attractions, with its revolving animals, musical nursery rhymes and monkeys striking the bell. All of the gold on the clock entered in AGOPB’s auction is stamped “750 Italy,” and the clock comes with its original leather tooled case. It is estimated at $10,000 -$20,000. 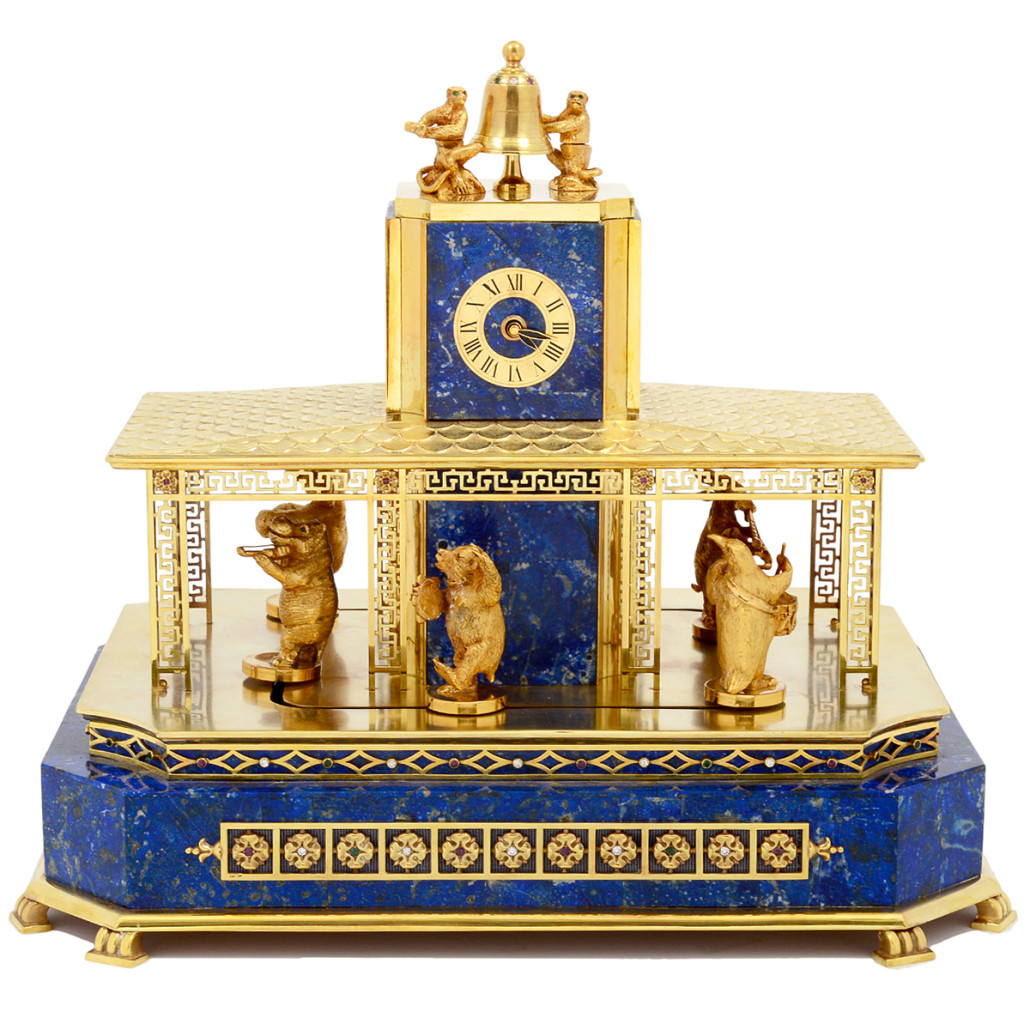 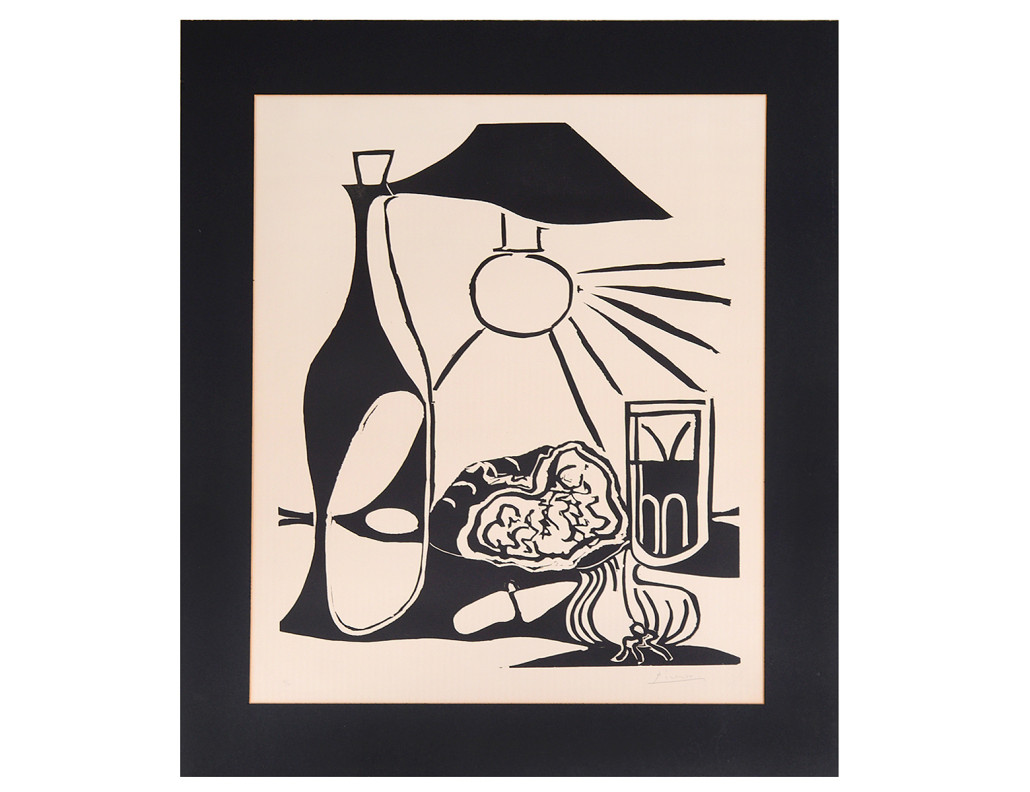 For the Audubon collectors, Lot 142, shown below, is the complete edition of The Birds of America from the Amsterdam edition published in 1985. The 435 original double-elephant folio plates were produced as a collaboration between the National Audubon Society and Abbeville Press to commemorate Audubon’s 200th birthday. The set is in four portfolios and comes with leather-bound and tooled explanatory volumes describing the plates. The lot is estimated at $10,000-$15,000. 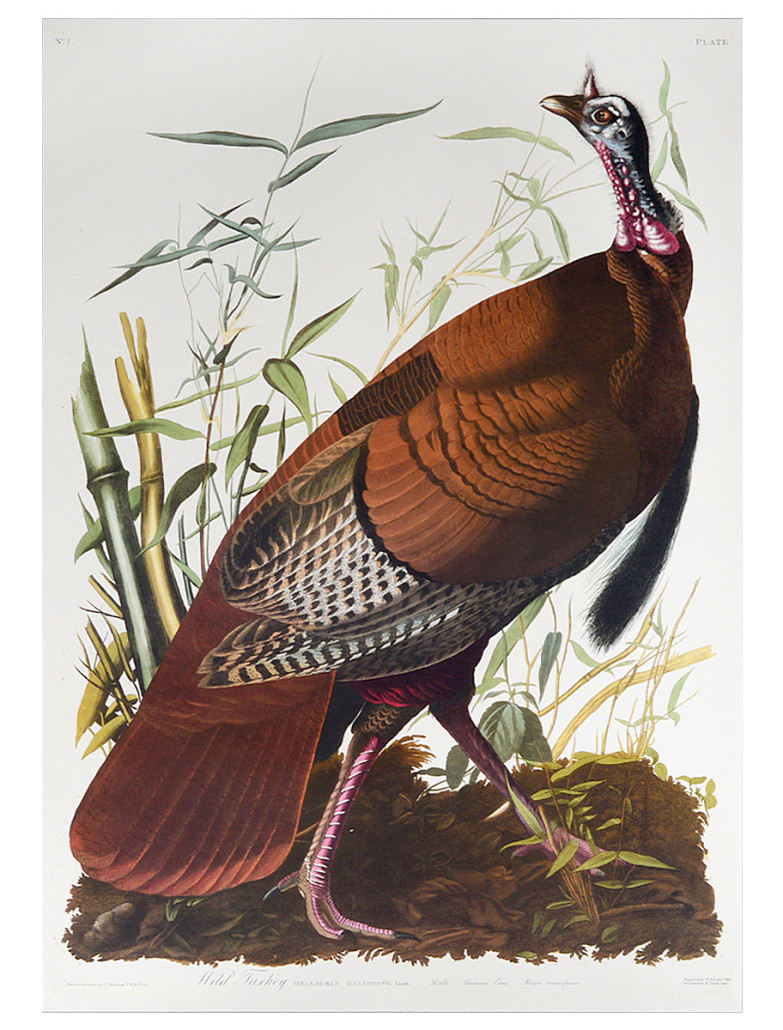 “Auction Gallery of the Palm Beaches Inc. is celebrating its thirteenth season, and this auction of elegant antiques is a fitting and certainly exciting way to commemorate the milestone,” said Baker.

The Monday, Oct. 19, 2015 auction will be held at the gallery premises at 1609 S. Dixie Highway in West Palm Beach, Florida, starting at 6 p.m. Eastern Time. View the online catalog and sign up to bid absentee or live via the Internet at www.LiveAuctioneers.com. For condition reports or any other information, contact the gallery at 561-805-7115.