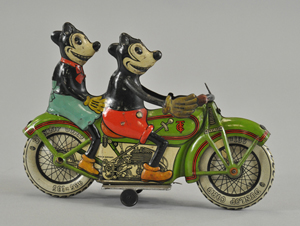 VINELAND, N.J. – The dreams of thousands of toy collectors worldwide have come true since last March when Bertoia’s launched a semiannual series of auctions to disperse the renowned Donald Kaufman Collection. Last September when the hammer fell on the closing lot for part II of the series, the incomparable collection of American, European and Japanese toys had already taken in $7.2 million, with much more to come. But many wondered if the massive Kaufman toy box had finally been depleted of its premier examples. Rich Bertoia, who cataloged much of the Kaufman collection, chuckled at the thought of the ultimate wellspring of antique toys running dry.

“If you liked parts I and II, you’ll love part III,” he said. “It’s absolutely the same high level of quality plus there’s the added attraction of part I of Don’s wonderful comic character toys. The only difference collectors will note this time around is that, sadly, Don will not be with us.” Donald Kaufman passed away on Oct. 12, 2009, knowing his toys were in the best of hands at Bertoia’s, and delighted that so many had already gone to fellow collectors in dozens of countries.

The third installment of the ongoing series, which will take place on Friday and Saturday, April 16 and 17, 2010, at Bertoia Auctions’ gallery in Vineland, N.J., will feature Internet live bidding through LiveAuctioneers.com. Bidders can expect to see a diverse mix of classic cast-iron, pressed-steel, comic character and European toys in superior condition. “There was only one way that Don liked his toys – factory fresh, or very close to it,” said Rich.

Friday’s session will open with approximately 100 European automobiles, trucks, busses and other unusual pieces. Again, the esteemed Marklin brand will take the spotlight. In addition to limousines and a 16-inch-long white-bodied luxury tourer outfitted with umbrella stand and other fine accoutrements, bidders will have the opportunity to acquire a smaller-scale Marklin fire pumper (estimate $30,000-$35,000). Marklin marketed this particular fire pumper in one of two ways – as an individual toy and as part of a 4-piece set also containing a garage, ladder truck and hose reel truck.

A host of Europe’s most highly revered toy manufacturers will be represented, including Gunthermann, Bing and Carette. “Many of the golden-era limos, cars and tourers are boxed. The selection will astound collectors – something like this won’t happen again in our lifetime,” Rich said. “There are some large-scale cars, like the superb green 14-inch Carette limo ($12,000-$14,000), and some very early French cars, including one that is steam powered. One of my favorites is the beautiful, boxed French racer in a light blue color that has its two original bisque-head figures.”

On the Friday, Bertoia’s will roll out the first offering of Don’s comic character toys, most of which are boxed. The array includes Marx walking figures, all of the figural musician and jigger toys, a scarce Goofy the Gardener made at the Marx plant in Dudley, England; and a Howdy Doody store display with tin background, piano and characters, which Bertoia’s experts have never seen before.

Other obscure comic character gems include a Hi-Way Henry, made by Fisher and distributed by Borgfeldt, that includes its original box. “No one we know of has seen this box before,” Rich noted. A similarly styled lithographed-tin car that is as rare as a dodo bird and possibly a prototype is the “Weekend Automobile.” Yet another rarity is the oversize Toonerville Trolley with Fontaine Fox 1922 copyright, but made in Japan.

Pressed-steel toys include rare Kingsbury designs – a “woody” station wagon, boxed outboard motor boat, and tri-motor airplane with hangar – and a few examples of Buddy ‘L’ factory archive pieces formerly in the collection of the company’s past president Richard Keats. “Don liked all of the pressed steel manufacturers and appreciated each one’s artistic interpretation,” said Rich Bertoia. “Again, the condition is fantastic, especially on some of the trucks.” Also on Friday, Bertoia’s will sell 20 of Don Kaufman’s pedal cars, including three with a comic-character theme.

Saturday’s session will feature 200 lots of European automotive toys, cast-iron and pressed-steel cars, and 30 pedal cars, including a closed-coupe Packard that would have been a luxury model in its day.

Additionally, more than 200 cast-iron toys will be offered, spanning from racers to oil tankers and wreckers. Brands include Arcade, Kenton, Hubley, Champion, Kilgore and more. Among the Arcade highlights are a U.S. Company moving van, a near-mint Hathaway’s Bakery delivery van and a very rare Brink’s express truck that is estimated at $12,000-$25,000.

The last of Don Kaufman’s biscuit tins will be auctioned during the Saturday session. A varied assortment, it includes a boxed Crawford’s racecar, a boxed Spieswagen with locomotive, several busses and delivery trucks, and a coveted Gray Dunn delivery motorcycle with sidecar.

Bertoia’s no-reserve auction of the Donald Kaufman Collection will take place April 16-17, 2010, with a special tribute and reception celebrating the life and collecting odyssey of the late Donald Kaufman to follow the opening day’s session. For additional information on any lot in the sale, call 856-692-1881 or e-mail toys@bertoiaauctions.com. View the fully illustrated catalog online and sign up to bid absentee or live via the Internet at www.LiveAuctioneers.com. 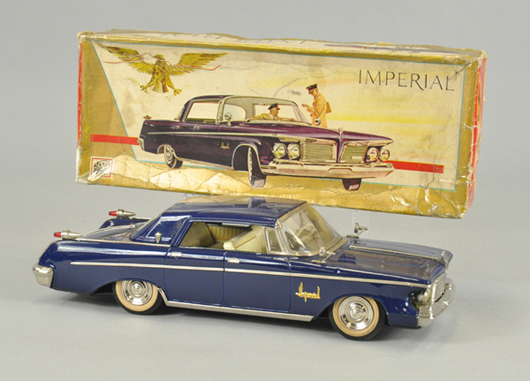 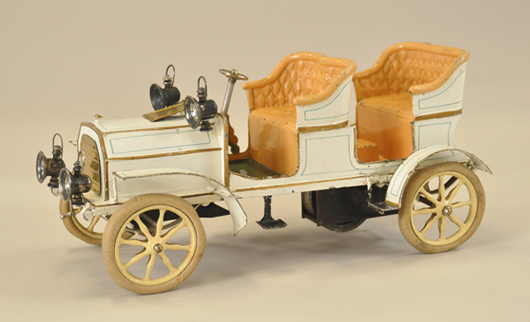 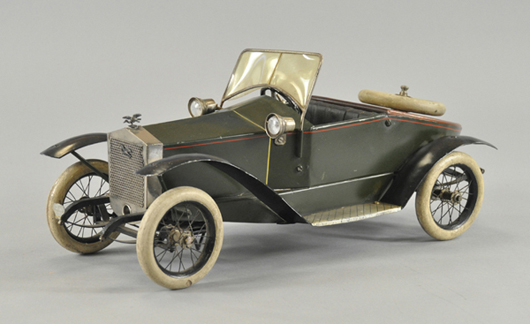 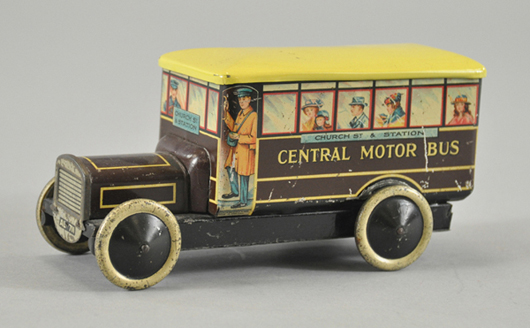 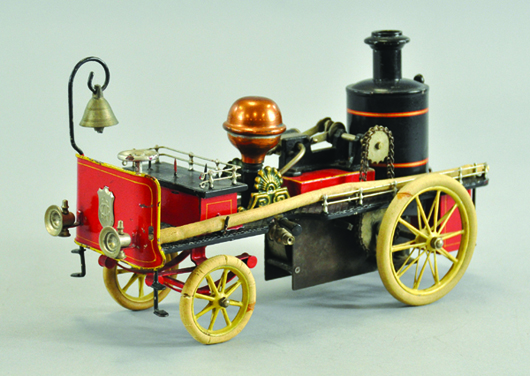 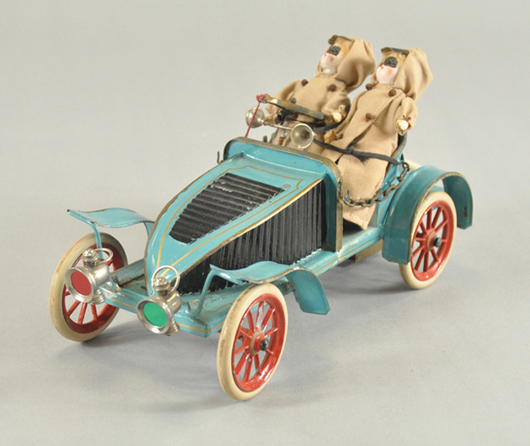 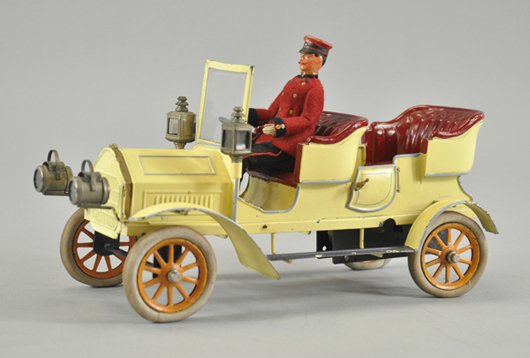 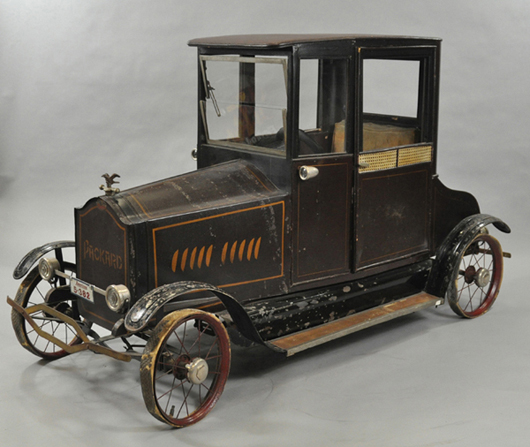 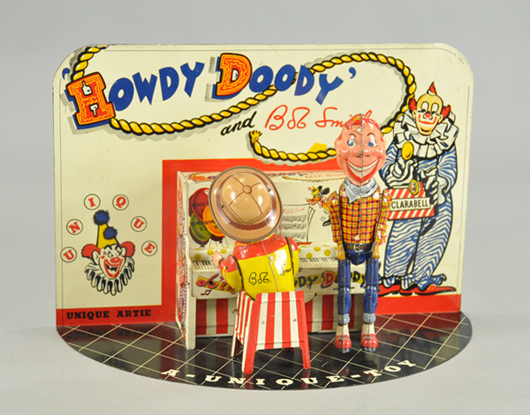