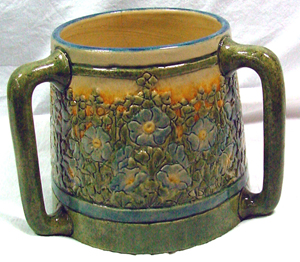 NEW MARKET, Tenn. – “This is certainly not your usual mix of antiques and art,” said auctioneer John W. Coker, describing the 493-lot selection of Asian, European and American pieces in his March 10 Global Arts Auction. “The way it has all come together, there’s quite an international flavor to the event.” Internet live bidding will be provided by LiveAuctioneers.com.

The Asian section of the sale features four very early Mandarin Chinese bronzes from the estate of Chesterfield Raines, a Cincinnati collector whose job was to appraise properties prior to the construction of the I-75 freeway in Ohio. “That’s how he got into the houses and was able to acquire so many fine antiques,” said Coker. The bronzes are pre-1850 and depict animals in confrontational or attack situations. Additionally, there is a large lion bronze that was surmounted on a marble base to create a lamp.

According to Coker, Raines favored “showy, unusual items.” Among his choices were a beveled mirror adorned by a Black Forest carving of a dog – later adapted for use as a hat rack; a 20-inch etched-glass Lalique-style vase repurposed as a lamp, and a sizable KPM porcelain plaque of a Dutch Masters scene of a woman dining next to a window. A painting from the Raines collection is dated 1907 and depicts a valley as seen from a higher elevation.

“This painting by John Franklin Earhart (1853-1938) is scenic and historically significant. It is almost certainly a landscape view of somewhere in Ohio or northern Kentucky. It’s not a place you can pinpoint exactly because the painting was done before the area had paved roads, telephone poles or other signs of modern technology,” said Coker.

Also from the Raines collection, a papier-mache or lacquerware covered pillbox of Continental or English origin features the image of a leaping dog on its lid. An old note tucked inside says it is “European from the 1670s.”

An exotic entry, a marble and oak 3-piece bedroom suite seems to borrow influence from both the Aesthetic and Arts & Crafts movements. The bed, dresser and washstand are trimmed in copper on their sides. “I’ve never seen another one like it,” Coker observed.

A tremendous amount of pre-auction interest has been generated by an exceptional painting, probably mid 19th century, that depicts a blond, blue-eyed Western child dressed in a traditional furisode kimono and white stockings suitable to wear with formal zori sandals. In her right hand, the subject holds an Asian doll, also dressed in traditional kimono attire; and in her other hand she holds a hand-painted paddle. The artwork is not signed, but it is a very high-quality painting, Coker said.

The auction contains 17 Picasso sketches consigned by a British physician who purchased them individually over the years from auctions, other collectors and even patients. Some of the sketches were done with felt pen on French postcards and feature the types of images for which Picasso is so well known – abstract people, horned rams and goats, nudes, etc. Among them is a large sketch in graphite and colored pencil that Picasso drew on the inside back cover of a catalog for an exhibition titled “Picasso in Provence.” It is signed by Picasso and dated 27-7-62.

A Hugh Anton Fisher (American, 1854-1916) watercolor measuring 20 by 30 inches depicts a European scene of a man beside his horse-drawn cart, gathering wood. Signed and framed, this outstanding painting was formerly displayed in Weissmuller’s jewelry store in Cincinnati [owned by a relative of Johnny “Tarzan” Weissmuller]. “This is a good, early Fisher – the perspective goes on forever,” Coker commented.

A very special highlight of the sale is a collection of seven Dard Hunter (American, 1883-1966) books on papermaking. Each book will be auctioned as a separate lot. Some are accompanied by a photo-watermarked letter from Dard Hunter, with content specific to the particular book to be auctioned. Hunter’s designs for books, leather, glass and metal helped unify the Roycroft product line and distinguish it from those of other American Arts & Crafts enterprises.

The Hunter books, as well as many Asian antiques in the sale (Imari, early cloisonné, Canton, etc.), early lighting and beautiful silver pieces are from the estate of Marian McManus of Westport, Connecticut. McManus was a well-known radio and TV vocalist before and after World War II. She toured with boxer Jack Dempsey to raise money for the war effort, and in her travels in the Far East, she picked up many very fine antiques. She also bought from dealers and estate sales in New England. Her husband was in the papermaking business and built an outstanding library of books, including the Dard Hunter titles and first editions of 19th and early 20th-century books about early shipwrecks, Staten Island and other New York-related themes. All of these antiques and books are included in the March 10 sale. 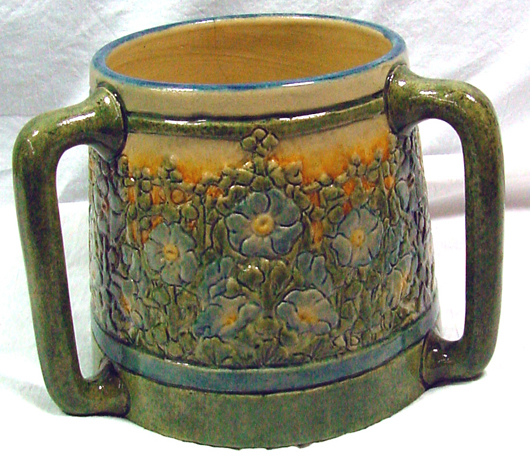