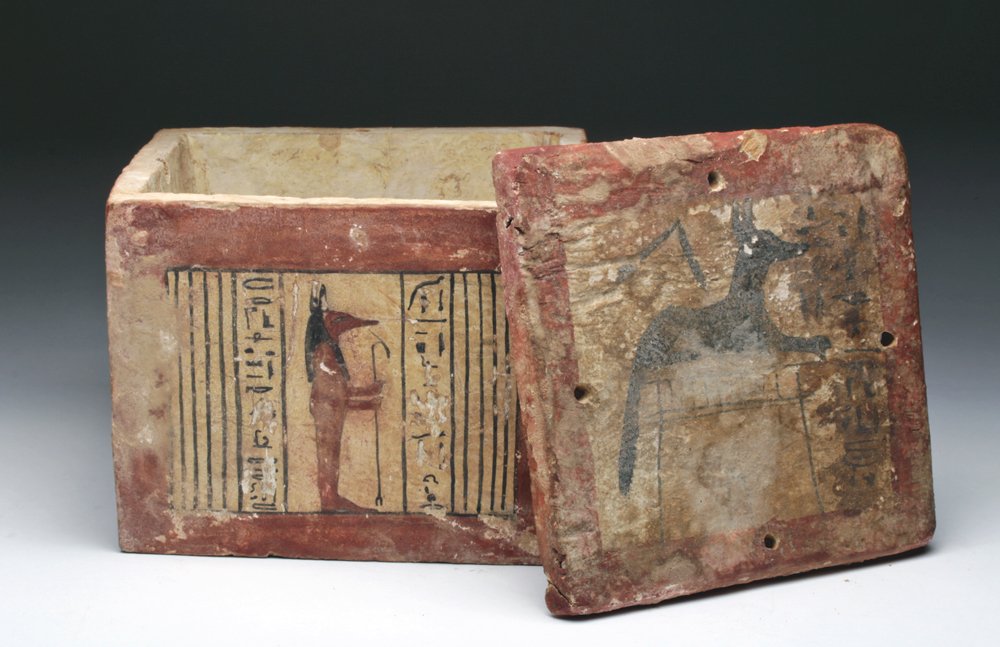 All items in the auction will convey with a certificate of authenticity and are unconditionally guaranteed by Artemis Gallery to be legal to buy/resell under the US statute covering cultural patrimony.

“Fascinating” is the only way to describe a polychrome gesso box with four hieroglyphic panels carrying dedications to Osiris, Anubis (twice) and Khepri. Dating to Egypt’s 26th Dynasty (circa 662-525 BCE), the decorative box was made for “Lady Setja-imen-kewaii.” Each panel is painted with the image of an animal (jackal, beetle, etc.) or a human face. With provenance from the Adeon Gallery, Chicago, and subsequent private ownership, the box is estimated at $40,000-$60,000.

A prized Southeast Asian highlight is the 22+ karat gold Burmese Buddha that dates to the 12th century. Seated in the Bhumisparsha mudra pose and delineated in fine detail, the 2¼-inch repousse figurine was previously part of a private collection in Palm Beach, Florida. It is expected to make $20,000-$30,000 at auction. 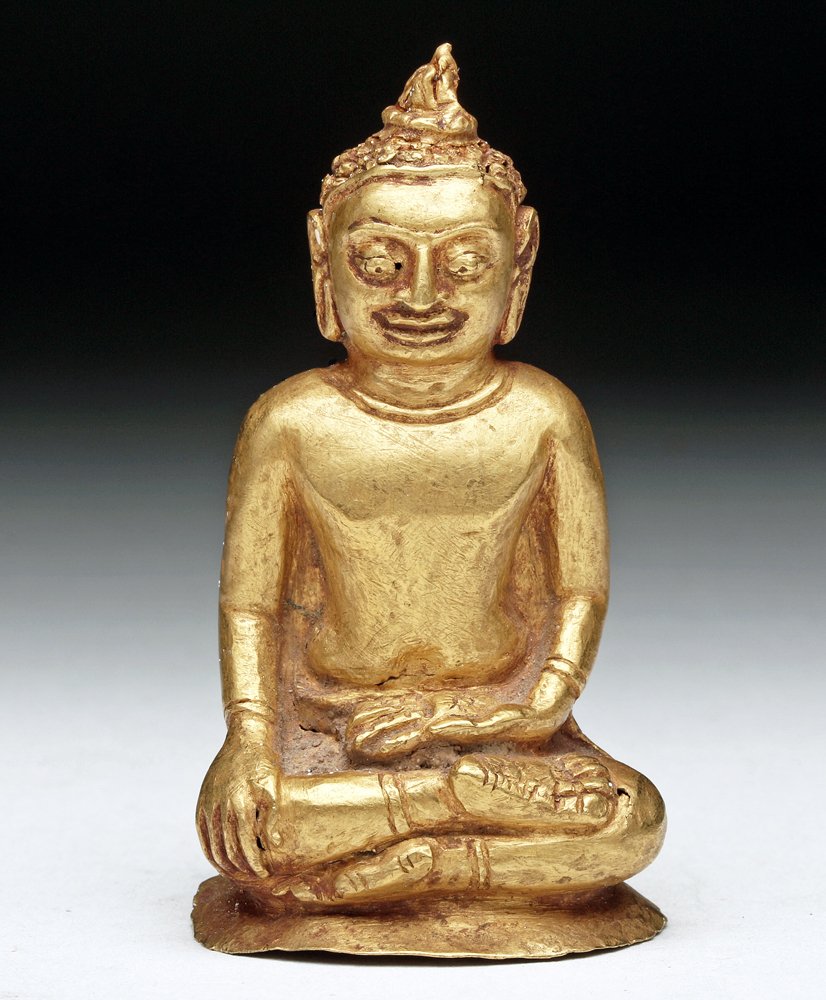 From northwestern Greece, circa late 6th to 5th century BCE, an Illyrian hammered bronze helmet of the type worn by the hoplite phalanx is intact and in superb condition, with desirable, natural verdigris finish overall. Formerly in a connoisseur’s collection in Ketchum, Idaho, the helmet is offered with expectations of reaching $20,000-$30,000. 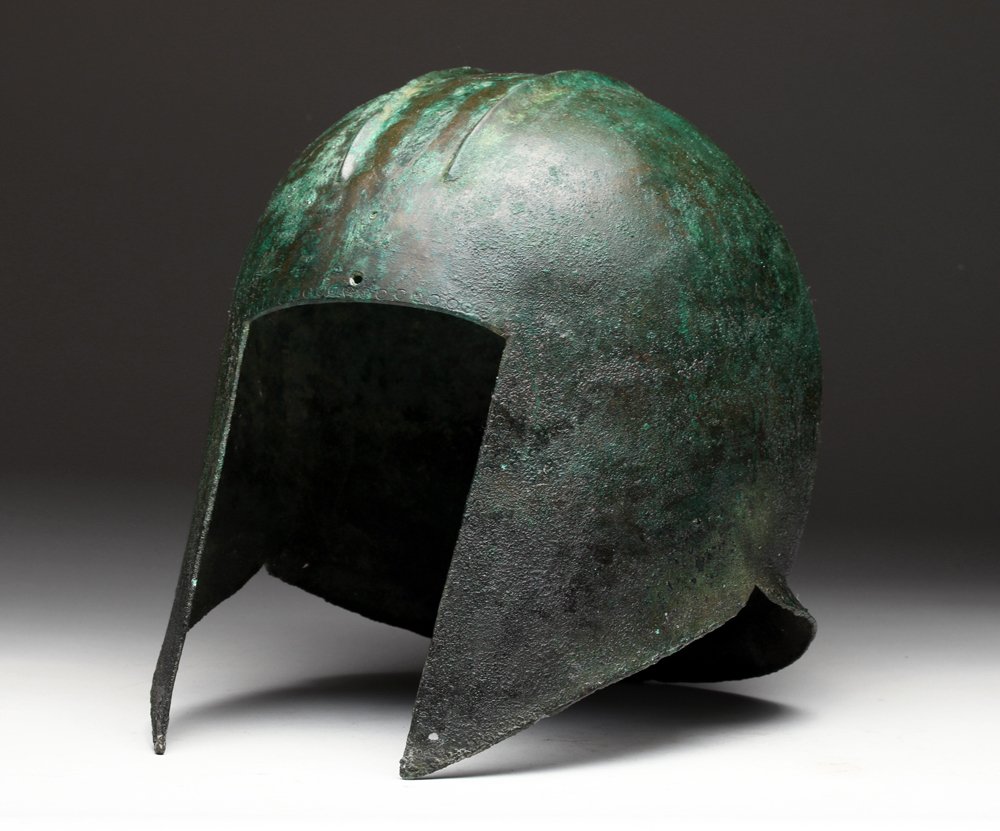 Striking and richly decorative, a Greek Paestan (Magna Graecia, southern Italy) red-figure bell krater features a seated nude female or hermaphrodite on one side and a half-nude female on the other. This vessel, which was used for mixing wine and water, has a distinguished provenance that includes the J. Kluge and P. Kluge collections, both of Charlottesville, Virginia. The 7½-inch krater, circa 340 to 330 BCE, is cataloged with a $6,000-$8,000 estimate. 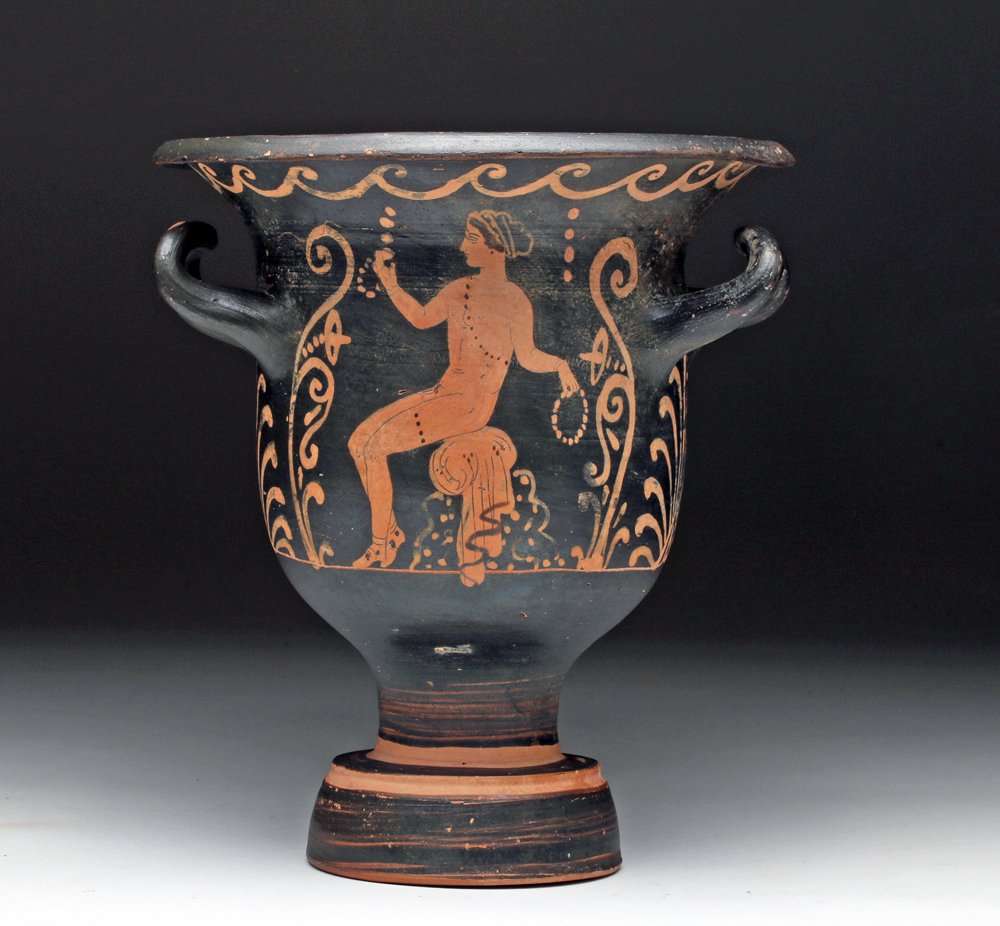 Made in the Roman Empire, 1st to 3rd century CE, a large and finely sculpted marble head of a man displays realistic facial details and a pensive expression. Reflective of an artistic style that was favored in the Augustan and Julio-Claudian periods, the sculpture measures 18¼ inches in height (inclusive of plinth) and is estimated at $20,000-$30,000. 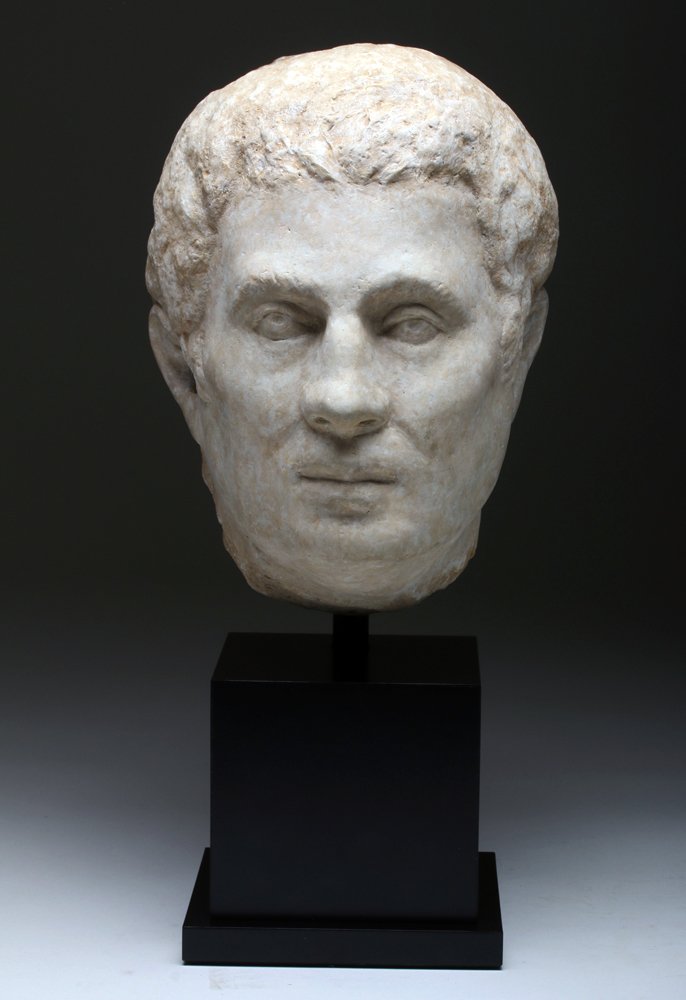 An absolutely genuine and original Bactrian composite stone idol from central Asia, circa late 3rd to early 2nd millennium BCE, is modeled in the form of a seated person in a patterned robe, with stone arms extended on a platform. Most excavated examples of this type of figure have been discovered at sites in Margiana, in southern Turkmenistan – possibly the site of their production. Ex Jabari collection, Boulder, Colorado, it is estimated at $8,000-$12,000. 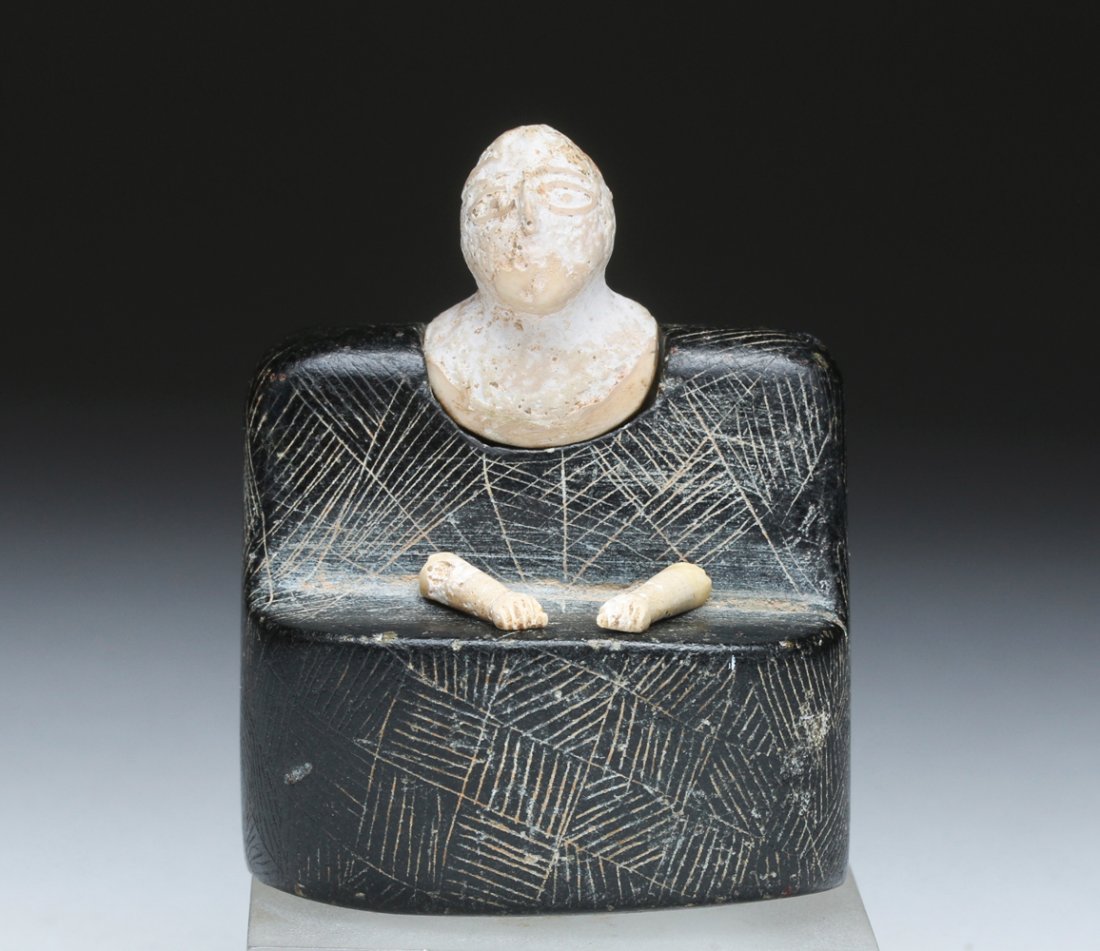 As exquisite as anything one might hope to find in a premier Fifth Avenue jewelry store, a circa 9th to 12th century CE Viking 18K gold ring has a beautifully decorated oval face adorned with a central cabochon garnet and an emerald cabochon at either side. Estimated at $20,000-$25,000. 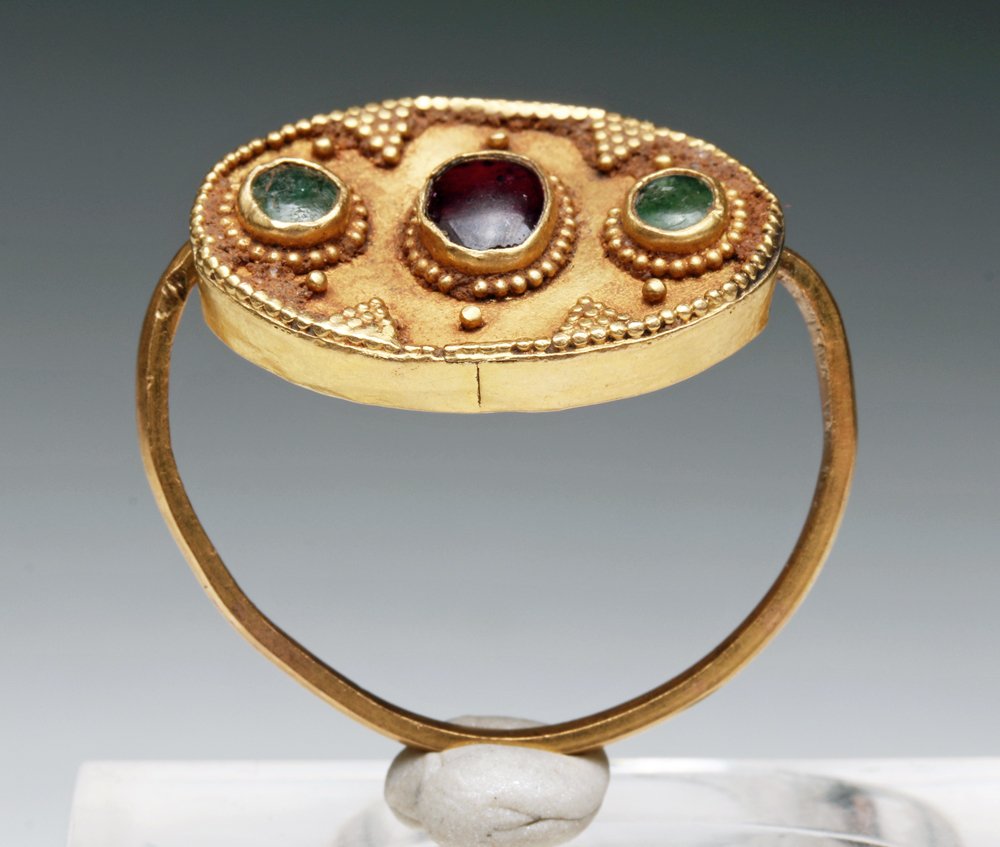 This very special ring was discovered in Great Britain, where so many important Viking relics have surfaced – like another Artemis Gallery auction highlight: a 6th to 8th century CE Saxon helmet with wide iron bands riveted to its crown. The conical shape of such a helmet protected the warrior’s head by deflecting direct blows, and it is known that more substantially constructed helmets of this type – e.g., of iron or steel – were typically worn by kings and nobles. Formerly in a British private collection, the helmet offered by Artemis is estimated at $20,000-$25,000.

In the Pre-Columbian category, a spectacular Pre-classic Veracruz figure of Venus, Remojada culture, circa 1250 BCE to 200CE, stands 26 inches tall and was formerly in the collection of Hollywood producer Tim Misenhimer. The figure’s long trail of provenance goes back to the 1930s and the Lewis Riley collection. Few examples of this type are known to exist, and it is expected to make $40,000-$50,000 at auction. 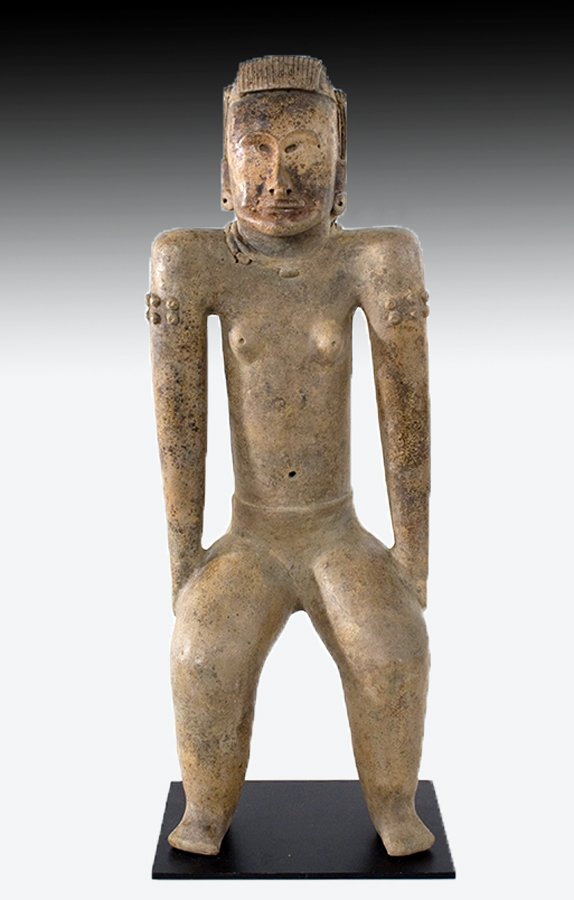 Another unusual Pre-Columbian entry is the Colima (western Mexico) redware vessel replicating a seated shaman, 300 BCE to 300 CE and estimated at $4,000-$6,000.

From the Rio Magdalena region of Colombia, a circa 800 to 1500 CE decorative pottery urn is a visual feast from top to bottom. Its bulbous base is decorated with four applied frogs, while the seated male figure that serves as the lid’s finial is adorned with shell beads, a molded self-necklace and original copper nose ring. The vessel stands 34 inches tall and is, without question, a museum-worthy artwork. 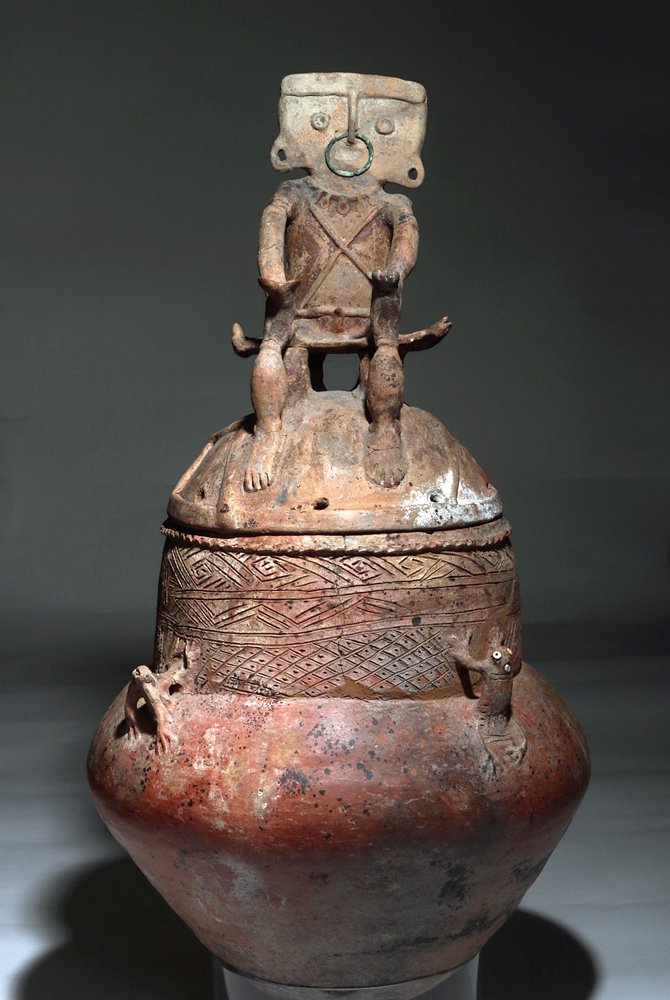 The urn’s line of provenance includes a private collection in Laguna Niguel, California; Sotheby’s New York (Nov. 16, 2002 auction), and the collection of the late Stanley Marcus, founder of Neiman-Marcus and a discriminating collector of art in its many forms. The auction estimate is $15,000-$20,000.

The June 11 sale will begin at 11 a.m. Eastern Time. For additional information about any item in the auction, call Teresa Dodge at 720-890-7700 or email teresa@artemisgallery.com.