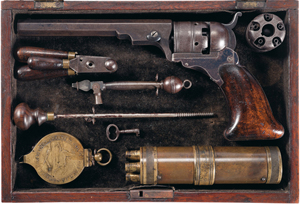 ROCK ISLAND, Ill. – In nearly two decades of firearms auctions, Rock Island Auction Co. has set many world records and brought to auction some of the finest collections in the world, but none can surpass their spring sale. RIAC is presenting their April 20-22 event as not only their finest firearms auction ever, but as the first great firearms auction of the decade. From genre to genre this auction is filled with desirable pieces for every level of collector.

Over 700 Colts will cross the auction block this spring with some of the most significant Colts ever assembled into one auction. A cased presentation Colt Model No. 3 Paterson with full complement of accessories takes the top estimate of $275,000-$450,000. The Colt Paterson was the first model produced by Samuel Colt, and because presentation Paterson pistols are of the rarest commodity known to firearms collectors this may be a once in a lifetime chance to own one.

RIAC is proud to present another first for Colt, serial no. 1 exhibition engraved and cased Colt Navy cartridge revolver. This revolver is the first true cartridge gun produced by Colt and is inscribed and presented to Colt employee Lewis Sheldon when he left Colt. It has remained in possession of the Sheldon family for 141 years until it was placed on consignment with the RIAC this spring. Call RIAC and ask for the specialists estimate on this truly historic piece.

Nearly 100 Colt percussions will cross the auction block with many cased, engraved and high conditioned examples. The finest production Colt Cavalry Model single action featured on the Discovery Channel pilot Ready, Aim, Sold leads the 100-plus spectacular Colt single actions in the auction with an estimate of $125,00-$175,000. The Colt single action is one of the most widely recognized firearms ever, and this April the highest condition example known to exist will be up for sale.

Colts are far from the only noteworthy pieces in this auction. The auction features rare milestones in the evolution of Winchester. The first true Winchester, a Briggs Patent Henry Rifle is estimated to bring $180,000-$275,000. This rifle represents the first attempt of Oliver Winchester to improve upon the Henry rifle from the dissolved New Haven Arms Co., but was quickly outdated by the Kings patent improvement making the Briggs patent rifles obsolete. Less than 10 of these rare rifles are known to exist.

Many have come to know RIAC as the authority on military arms and this sale is no exception. RIAC is offering the finest collection of Lugers in their history featuring many presentation Lugers including a cased 1902 carbine presented by Georg Luger ($90,000-$140,000), an ultra rare “GL” prototype baby Luger ($65,000-$95,000), one of two known Hitler “Night Guard” pistols with flashlight attachment ($75,000-$150,000), and many other rare, high conditioned, presentation and historic Lugers.

Some of the biggest names in history are also represented in this auction. A cased three-barrel percussion rifle/shotgun attributed to Abraham Lincoln is expected to bring $50,00-$100,000. Lincoln encouraged weapons development during the Civil War and even test fired arms himself on an open area south of the White House.

A Gastinne Renette breech-loading carbine attributed to Napoleon III has a unique history and is estimated at $22,500-$37,500. There are many other firearms inscribed, presented and attributed to historical figures in this auction including Ulysses S. Grant, Thomas Jefferson Brady, President of Peru Jose Balta, King George III and Henry Clinton.

In addition to some of the most significant firearms ever assembled in one auction, RIAC will feature over 150 lots of 19th century antiques and Americana. The Americana is highlighted by a magnificent L.C. Tiffany Laburnam lamp, which is expected to bring $85,000-$175,000. A lifetime collection of barber bottles from every late 19th century glassmaker, Illinois River decoys, territorial stoneware, signed oil paintings and much more will be featured during the three-day sale.

View the full catalog online at www.rockislandauction.com or call 800-238-8022 to order your two-volume full-color catalog. See a sampling of the lots at the NRA National Convention in St. Louis, Mo., or preview the entire auction April 19 at the RIAC facilities. 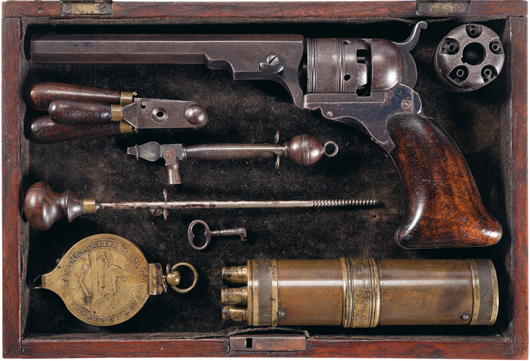 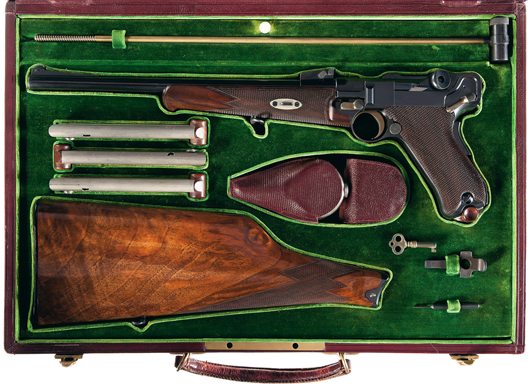 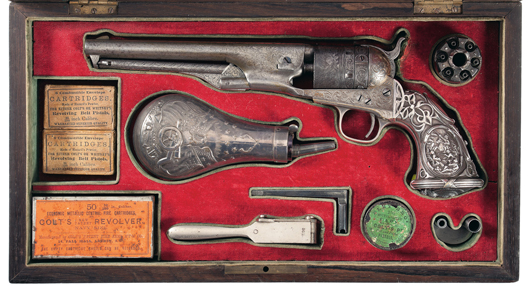 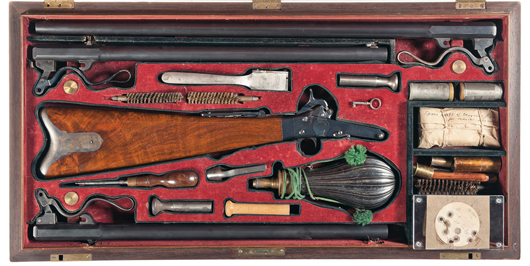