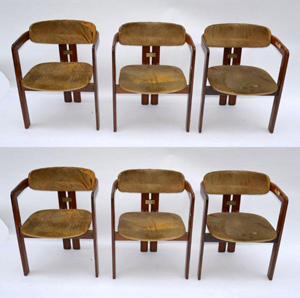 A set of six Tobia and Scarpa chairs. Their co-joined back legs give the effect of a triangulated base. Image courtesy of Roland Auction.

NEW YORK – When Roland Auction received 20th-century furniture by Tobia and Afra Scarpa, whose work can be seen at MoMA, abstract steel sculptures by Magpantay and fine 19th-century figurative bronzes by Jean-Paul Aube and August Peiffer for its Nov. 12 auction, the words “high style” rippled through the gallery.

LiveAuctioneers.com will provide Internet live bidding for the auction, which will begin at 11 a.m. Eastern.

According to Robert Roland, co-founder, naming the auction “20th Century Modern Antiques” more accurately reflects the vast range of properties. And with highlights spilling out the front door and into the lobby of the Roland Auction gallery at 80 E. 11th St., previewers will get an eyeful immediately.

For starters, there is a large steel sculpture by Magpantay in the form of a worktable on which surreal anthropomorphic male and female forms with industrial style elements are being crafted. The nearly 50-inch table and its abstracted forms stand 60 inches high. The catalog estimate tops off around $7,000, and interest has been strong.

Nearby, a contemporary steel sculpture of a chair issuing forth yet more anthropomorphic skeletal forms with industrial style elements, also by Magpantay, is startlingly familiar. The chair is expected to command around $7,000 as well.

These are offset by two remarkable 19th-century figurative French bronzes. One, of a muse with palette titled Harmonie, was created by Jean-Paul Aube. It carries an estimate of $1,400 to $1,800. The second allegorical bronze, by Auguste Peiffer, of two wood nymphs fleeing, is estimated at $1,800 to $2,500.

The joy of the sale, however, is its diversity, and nothing expresses this better than a 4-foot-tall tall wire sculpture by Curtis Jere of three birds in flight, their naturalistic wings created from lengths of steel. They soar above a pyramid form base. The bird sculpture is expected to command around $1,800.

Two oil on canvas portraits by Nathan Wasserberger, born 1928, provide the figurative counterpoint. One, a three-quarter portrait of a seated female on blue ground, is expected to fetch about $800. The second, a nude, also on a blue ground should reach $1,500.

Meanwhile, an 80-inch-tall gray and white abstract by Francis Sherron, titled Skybreaker, 1973, creates the perfect ambiance for the snakeskin covered coffee table and the tessellated stone coffee table that are just warm-up acts for several Karl Springer items. The Springer lots include a parchment covered table, console and desk. Catalog estimates on the Karl Springer items range from $3,000 to $4,000.

Six dining chairs by Tobia and Afra Scarpa give the impression of having a triangulated base when, in actuality, they are four legs with two co-joined.

A square modern mirror with crème surround by Milo Baughman for Thayer Coogan, carries the designer’s mark on the back. If purchased with a lot of six upholstered side chairs with scroll-top backs, by the same designer, also for Thayer Coogan, the buyer could call it a lucky day.

Other modern furniture includes a Dunbar olivewood dining table, a rosewood chest by Gerhard Berg and a low table inspired by Gabriella Crespi. A delightful Italian top brass daisy-top pedestal table on faux marble base embodies the spirit of the ’60s and ’70s.

Finally, a high-style designed circular mirror, with a wooden circle offset just inches from the perimeter, justifies the accolades given Italian designers.

With properties still arriving, collectors and designers are advised to frequent the Roland Auction catalog at LiveAuctioneers.com. Pictures and descriptions are being uploaded daily.

Roland Auction’s 20th Century Modern Antiques sale will preview Thursday, Nov. 10, and Friday, Nov. 11, from 10 a.m. to 7 p.m. Interested parties who cannot view the properties in person are advised to call the gallery for details and condition reports. Bill and Robert Roland can be contacted at 212-260-2000. The Nov. 12 sale will begin at 11 a.m. Eastern in the gallery and on LiveAuctioneers.com. 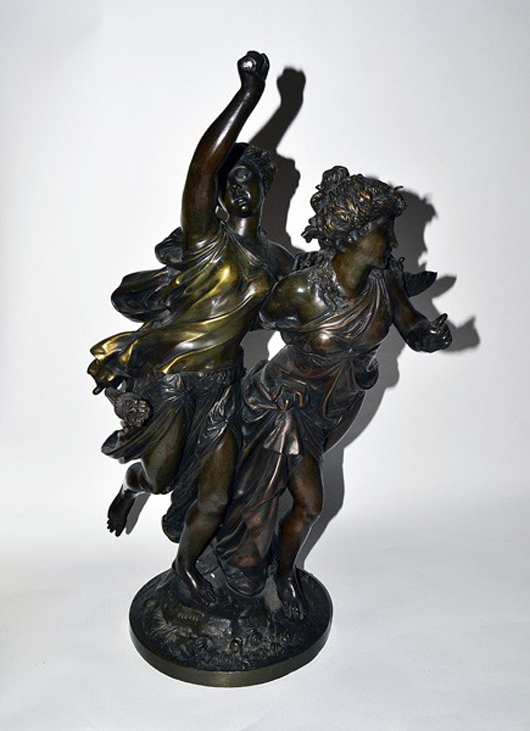 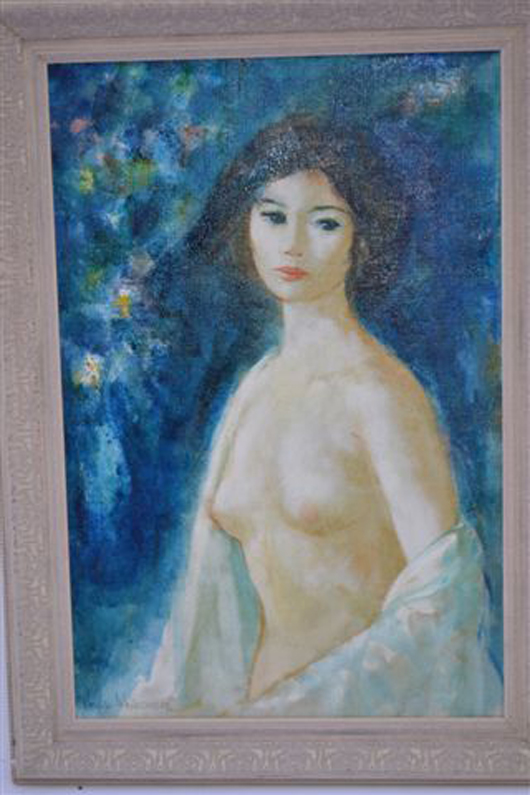 Oil on canvas by Nathan Wasserberger of seminude female on a blue ground. Image courtesy of Roland Auction. 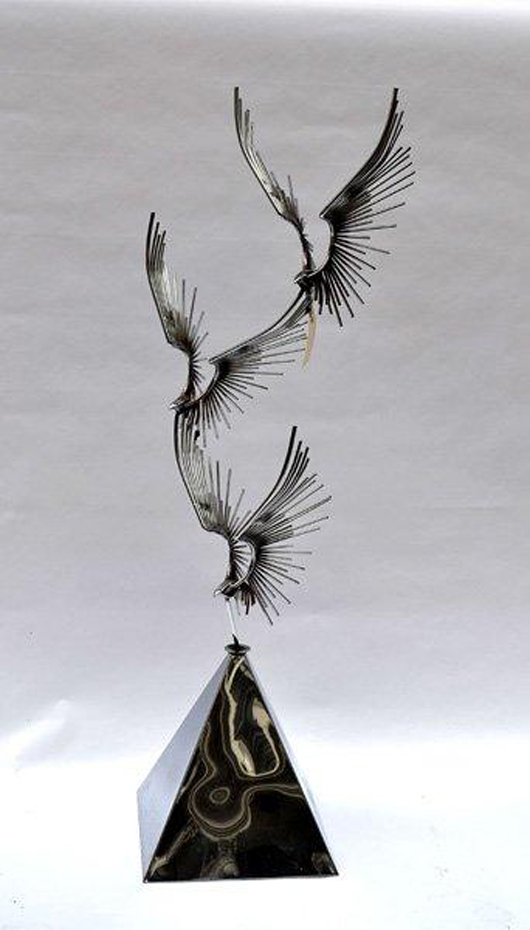 A sculpture of three birds in flight of wire. Image courtesy of Roland Auction.