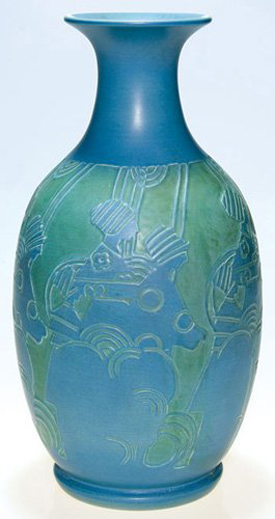 Rare and important, this 14 3/8-inch Overbeck vase is carved with the profiles of three women walking amid stylized flowers. The work of sisters Elizabeth and Mary Frances Overbeck, the vase is estimated at $12,000-$17,000. Image courtesy of the Auctions at Rookwood.

CINCINNATI – The Auctions at Rookwood will present art pottery and art glass treasures with Keramics 2010 on Saturday, June 5, and Rookwood XX on Sunday, June 6. LiveAuctioneers will provide Internet live bidding for both auctions, which begin at 10 a.m. Eastern both days.

“It’s very good sale and we’ve tried to be conservative with the pricing. We hope customers appreciate that and come spend some money,” said Riley Hummler, director of auctions at Rookwood Pottery.

As in past Cincinnati auctions, the first day will be devoted to art pottery other than Rookwood. In recent years art glass has been added to the mix.

An outstanding Overbeck pottery vase carved with the profiles of three women walking amid stylized flowers will come up early in Saturday’s auction. Done by Elizabeth and Mary Francis Overbeck, the 14 3/8-inch vase bears the incised Overbeck logo along with the artists’ incised initials. In excellent original condition, except for light crazing, the vase has a $12,000-$15,000 estimate.

A rare Weller vase, based on a painting by Childe Hassam, pictures a nude female bather on a rocky seaside cliff done in Hudson Perfecto or Silvertone colors. The 11-inch vase bears an impressed Weller mark in block letters. It carries a $6,000-$8,000 estimate.

“The figure and background are three dimensional and may be cast but we have never seen another example. We do not know if Weller made more of these but this is the sole example that we have encountered,” states the auction catalog.

An impressive Daum Nancy cameo glass lamp, the shade and base exhibiting frilly cockscomb flower heads, the blooms supported by woody stems lined with foliage, will also be sold Saturday. The shade measures 12 3/4 inches in diameter and displays the Daum Nancy signature with the Cross of Lorraine. The wrought iron arms are each tipped with a single ginkgo leaf. The lamp is 20 inches high and has a $15,000-$20,000 estimate.

A fine paperweight vase created by Mark Peiser in 1979 is an example of the contemporary glass at the auction. Fashioned from Wisteria blue glass, the vase features a tropical theme showing two palm trees on the front and a solitary palm tree on the obverse. The trees tower over a speckled sandy shore graced by tiny white and yellow flowers peeking through tall grasses. Within the bottom of the vase, a pool of cobalt blue imitates a pool of water. The early signed Peiser vase carries a $10,000-$15,000 estimate.

Headlining Rookwood XX is a rare Iris glaze vase with Art Nouveau tulip decoration done by Kataro Shirayamadani in 1900. Its yellow flowers, done in heavy slip, are nicely contrasted against the milky white ground. Marks include the Rookwood logo and flames indicating 1900 along with special shape number S 1656. There are also remnants of the red acquisition numbers used by the Cincinnati Art Museum for pieces on loan from Rookwood. “Rookwood thought enough of this vase to lend it to the CAM and it is also possible that it may have made its way to Paris for the 1900 Expo,” notes the auction catalog. In excellent original condition with a bit of crazing, the 13 1/8-inch vase is expected to sell for $9,000-$12,000.

The sale will take place at Rookwood Pottery, 1920 Race Street, in the historic Over-the-Rhine neighborhood near downtown Cincinnati.

Hummler said he expects to encounter some logistical and emotional hurdles in staging the auctions at a whole new venue, but with the customers’ patience believes the sale will go smoothly.

More than 500 lots are included in the Keramics 2010 auction Saturday. The Rookwood XX sale on Sunday has approximately 400 lots.

Kataro Shirayamadani decorated this rare Iris glaze vase with Art Nouveau tulips early in his career at Rookwood. The 13 1/8-inch vase is dated 1900 and is estimated at $9,000-$12,000. Image courtesy of the Auctions at Rookwood. 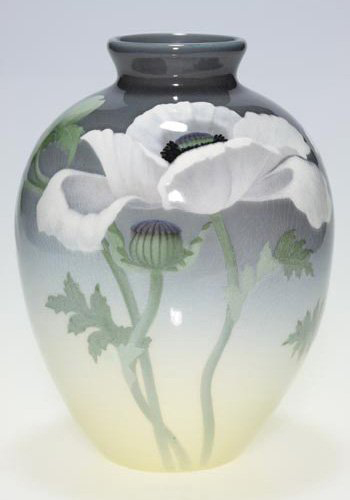 Rookwood’s Carl Schmidt decorated this 8 1/2-inch vase with large, flamboyant white poppies. The Iris Glaze vase is dated 1904 and has a $3,000-$4.000 estimate. Image courtesy of the Auctions at Rookwood. 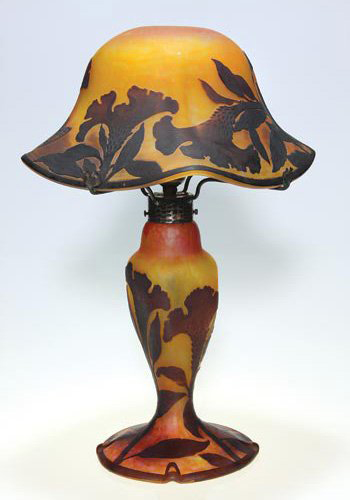 Standing 20 inches high, this impressive cameo glass lamp is signed Daum Nancy with the Cross or Lorraine. It has a $15,000-$20,000 estimate. Image courtesy of the Auctions at Rookwood. 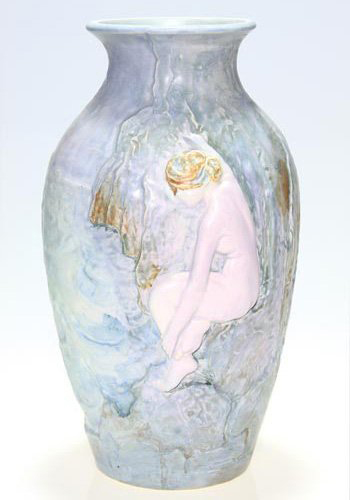 The scene on this rare Weller 11-inch vase is based on a painting by American Impressionist artist Childe Hassam that pictures a nude female bather on a seaside cliff. Marked ‘Weller’ in block letters, the vase, has a $6,000-$8,000 estimate. Image courtesy of the Auctions at Rookwood. 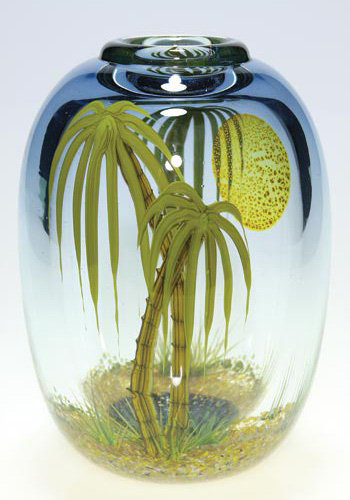 Mark Peiser created the decoration for this 1979 paperweight vase using Wisteria blue glass. The 9 1/2-high signed vase has a $10,000-$15,000 estimate. Image courtesy of the Auctions at Rookwood.