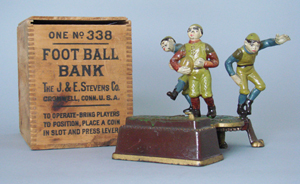 TIMONIUM, Md. – Few categories of antique toys have been as consistently “bankable” over the past few decades as banks themselves, especially cast-iron mechanicals. And nothing brings out the collectors faster than news of a great collection coming onto the market, says mechanical bank specialist and RSL Auction co-owner Ray Haradin, who speaks from long experience. Together with his business partners Steven and Leon Weiss – the “S” and “L” of “RSL” – Haradin has handled some headline-grabbing collections in the past. On May 22, they’ll do it once again as they auction the Richard C. Stevens collection of mechanical banks in a 360-lot auction at Richard Opfer’s gallery in Timonium, Maryland. Internet live bidding will be available through LiveAuctioneers.com.

Richard Stevens began collecting banks in 1984, but his most active period of buying was in the early 1990s. “Mr. Stevens has always sought out the very finest examples, and his collection contains probably 30 banks that qualify as ‘world class,’” said Haradin. “These banks have exquisite pedigrees and rival or surpass the conditions seen in many major collections. The quality is simply spectacular – it tops anything we’ve ever had in our past sales.”

Rich with provenance, the Stevens collection carries on the tradition of many legendary collections of the past. An Atlas Bank formerly in the collections of Leon Cameto and Larry Feld is estimated at $25,000-$35,000 and is “as close to mint as you can get,” said Haradin. A Boy Scout Camp bank, made by J. & E. Stevens and in near-mint condition, was once part of the fabled Perelman Museum collection and is expected to earn $20,000-$30,000.

The collection also includes a mint/boxed ex-Stephen Steckbeck collection Calamity bank ($60,000-$90,000) and what may be the finest known example of a circa-1895 “Butting Ram Man Thumbs Nose” bank ($12,000-$18,000). Haradin described the rare Butting Ram as “an anomaly in the mechanical bank world. It was made in a machine shop in Wisconsin and was the only bank they produced.”

An exquisite example of a Chief Big Moon bank with red base rather than the usual brown was successively in the ownership of Bill Bertoia, Donal Markey and Stanley Kesselman. It is estimated at $20,000-$30,000. An African-American and baseball-themed Darktown Battery bank traces back through the collections of Kesselman, Larry Feld, and before that, Markey; while a Two Frogs bank in mint/boxed condition includes provenance from the collections of Feld, Kesselman and Bertoia.

In near-mint condition, a Lion Hunter is expected to make $25,000-$35,000; and a Magician bank in outstanding condition with particularly good flocking to the sides of the podium stairs could conjure a winning bid of $8,000-$12,000.

A red-dress version of the Mammy with Child mechanical bank carries an estimate of $18,000-$24,000; while a white Owl Turns Head bank is expected to make $12,000-$16,000). Another animal form that is as rare as hen’s teeth is the circa-1930 Kilgore Turtle bank, ex Stan Sax and Gertrude Hegarty collections, estimate $50,000-$70,000. Additional items of note include original bronze patterns for early mechanical banks, including Darktown Battery and North Pole; and one pattern for a still bank.

A second featured grouping within the mechanical bank section consists of 20 examples from the collection of New York investment broker Stanley Kesselman. “Not only has Mr. Kesselman always been known for seeking out the finest examples of mechanical banks, he would also pay whatever it took to get the best – and it shows,” said Haradin. “When you see the banks in this sale from the Kesselman collection, it’s very clear that he got what he paid for.”

The list of mechanicals with prestigious lineage continues with a superb example of a J. & E. Stevens Breadwinners bank that, prior to its purchase by the consignor, belonged to Al Caron, Bob Brady, and then Larry Feld. Exhibiting bright, beautiful paint, the Breadwinners bank could bring home both the bread and the bacon, if it achieves its presale estimate of $90,000-$120,000.

While the majority of the sale consists of mechanical banks, it also contains some gorgeous cast-iron and spelter still banks. Cast-iron still bank highlights include: King Midas, Hippo, a rare painted version of Barrel with Arms ($6,000-$9,000) and a neighborhood of approximately 30 building banks, including a City bank. A fast-rising specialty, painted spelter banks are expected to put in a praiseworthy performance, just as they did in RSL’s Oct. 17, 2009 sale. Top lots include a Paul Kruger Transvaal bank ($5,500-$7,500) and a Puss in Boots with Staff ($6,500-$8,500).

Approximately 15 American clockwork toys, mainly from one collection, have been consigned to the sale. Top Ives lots include an Aunt Chloe (Washerwoman) estimated at $12,000-$18,000; circa-1885 Boxers (Sparring Pugilists) estimated at $9,000-$12,000; probably the finest known example of Old Nurse, which is mint and boxed; and two examples of Preachers at Pulpit. Other American clockwork toys include a circa-1876 Secor Banjo Player ($18,000-$25,000) and a fabulous oversize tin omnibus, probably made by Hall & Stafford. Emblazoned with the word “Hotels” on its front and “Depots” on its back and sides, the 22-inch vehicle is described by Haradin as “the largest clockwork omnibus I’ve ever seen.” It is entered in the auction with a $45,000-$65,000 estimate.

The sale also includes seven charming bell toys and a lineup of excellent European tin automobiles and novelty toys. A beautifully restored boat, the Jolanda, is expected to drop anchor at $14,000-$20,000.

“If there’s one thing that I can’t stress enough, it’s the condition of the banks in the Stevens collection,” Haradin said. “In our past sales, we would have maybe 3 or 4 banks that you could confidently describe as being at the pinnacle of the collecting ladder. This collection contains more than two dozen that would fit that description. This is a rare opportunity to acquire some very, very high-quality banks.” 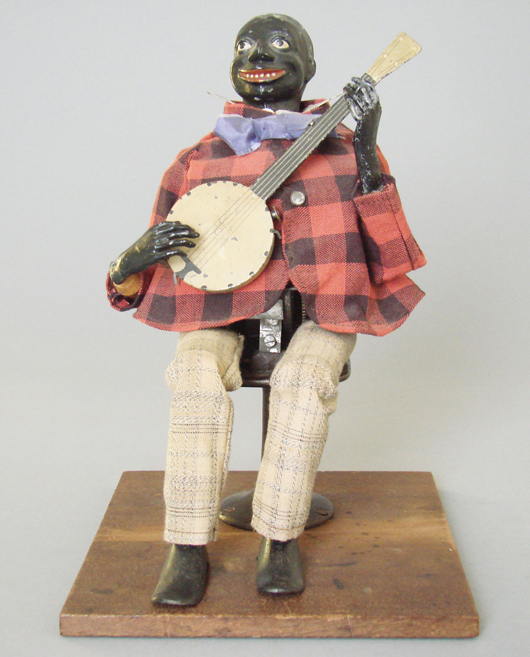 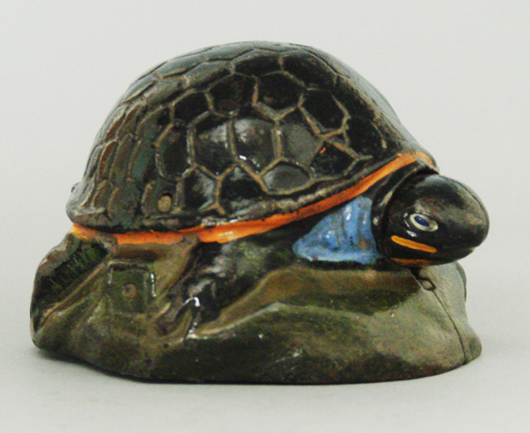 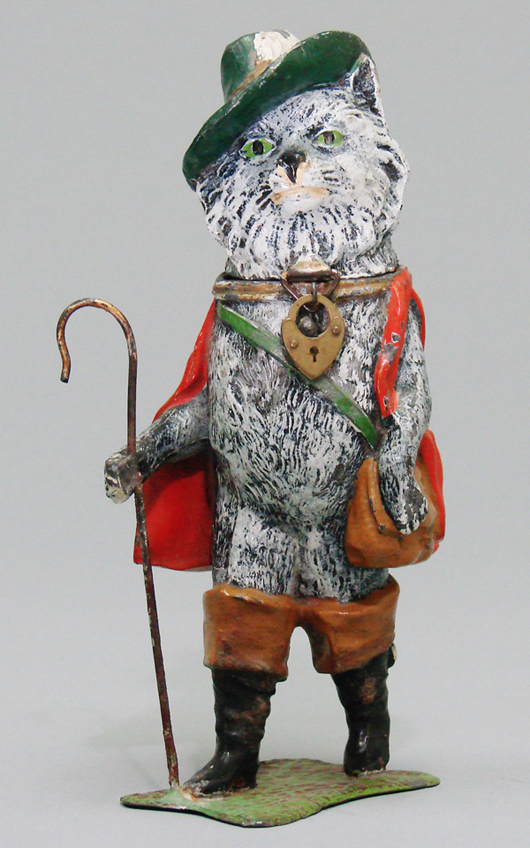 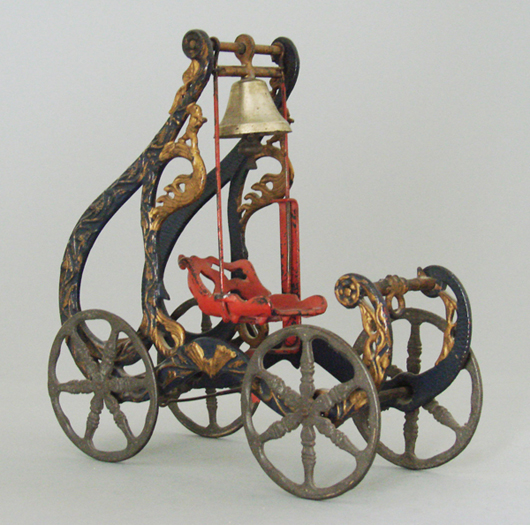 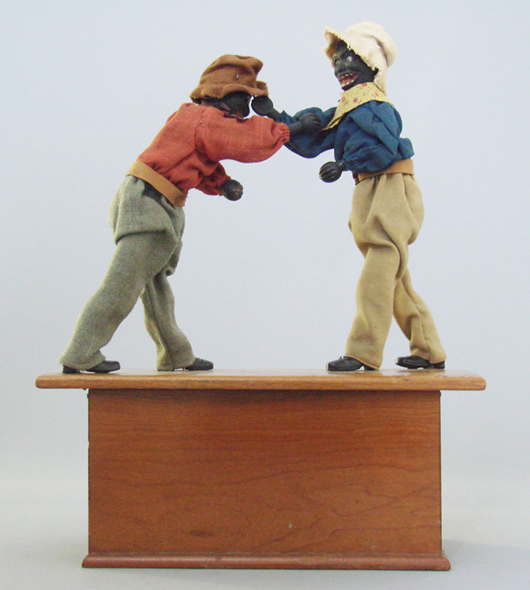 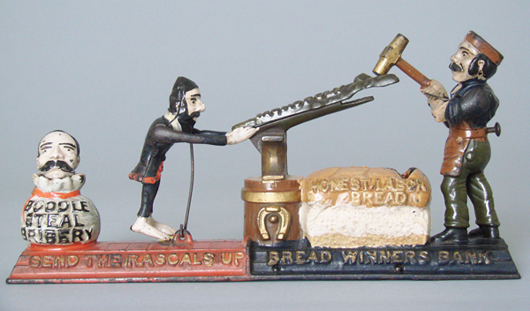 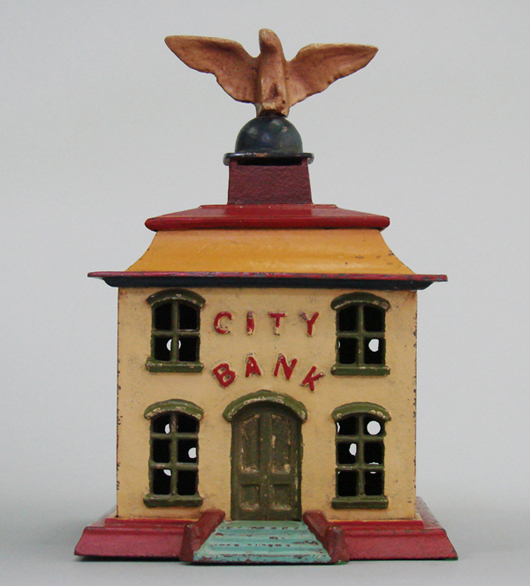 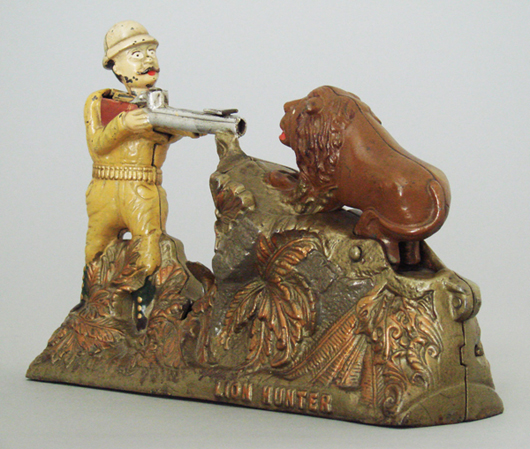