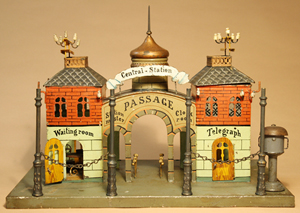 WHITE HORSE, N.J. – Ray Haradin, Steven Weiss and Leon Weiss – the R, S and L of RSL Auction Company – will officially open the doors to their new headquarters on December 7th with a fantastic 700-lot auction of banks, toys and black Americana. Conveniently located on US Hwy 22 East, halfway between Allentown, Pa., and Newark, N.J., the partners’ spacious, new 6,000-sq-ft venue is only 20 miles from Newark Liberty International Airport, an easy exit off I-78.

Previously, RSL held its sales at the suburban Baltimore gallery of auctioneer Richard Opfer, who also presided over their events. “Only the location will change,” said Ray Haradin. “Rick will still be calling our auctions, and our friends in the toy hobby can count on the same hospitality and camaraderie they’ve always enjoyed at our sales.” Also as in the past, Internet live bidding will be available through LiveAuctioneers.

The auction will begin with Part II of a New York collector’s architectural still bank collection that was introduced to bidders last December. There are many exquisite painted examples among the 100 lots of architectural “stills,” including the best red version of an Ives, Blakeslee Palace Bank Haradin says he has ever seen. On the back of the bank is the name and address of the original owner: “Horace Marion Fulton, 1211 Vermont Avenue.” Estimate: $18,000-$22,000.

A near-mint, green variation of a J. & E. Stevens Multiplying Bank must have mystified youngsters of a century ago. When a penny is inserted, two mirrors on the bank’s side panels cause the coin to “multiply” and appear as three pennies – possibly a parable to teach children that a penny saved is a penny earned, and then some. The ingenious bank is expected to make $10,000-$15,000.

Additionally, there are fine painted examples of a State Bank, City Bank, Boston State House, Crown Bank and 1882 Church. One of the rarest pieces in the sale is a circa-1915 Kenton Hardware Woolworth Building on base, with provenance from the Donal Markey collection. “The base is what makes this particular bank so rare,” Haradin noted. It will be offered with a $6,500-$8,500 estimate.

Next to cross the auction block will be a selection of ever-popular spelter banks, including a very rare, circa-1930s German-made Mickey Mouse with Ball on base. It is estimated at $3,000-$4,500. The spelters are followed by another 100 lots of still banks, led by a circa-1907 Lincoln Bust Safe, from the J.M. Harper series of safe banks. One of only two known, it is entered with a $5,000-$7,000 estimate.

Always a highlight of RSL’s auctions, the early American tin section features bell toys and Ives clockwork productions. An Ives Uncle Tom the Fiddler toy, which also appeals to collectors of black Americana, features a cloth-dressed character who plays his fiddle when wound up. It is a rare variation with an orange and yellow painted base with aqua striping. Estimate: $5,500-$7,500. Another wonderful Ives toy is a near-mint, Civil-War-themed Daughter of the Regiment, made in 1874. The historical toy depicts a pretty young woman in Southern attire. Retaining its rare original box, this very desirable survivor is estimated at $7,500-$10,500.

Cast-iron horse-drawn and automotive toys are the perfect lead-in for an assortment of mechanical banks in consistently superior condition. Haradin says the circa-1905 football-themed Calamity Bank to be auctioned is “in pristine-plus condition and one of the ten best examples known.” Estimate: $28,000-$35,000.

Another prized mechanical entry is an 1886 Breadwinners Bank designed by Charles Bailey and manufactured by J. & E. Stevens. Considered one of the greatest banks ever produced, it served as a three-dimensional commentary on the harmful nature of monopolies and the rise of unionism that subsequently led to the passage of the Sherman Anti-Trust Act. Near perfect and in very good working order, the bank could reach $35,000-$45,000 at auction. Yet another stellar lot is a near-pristine, circa-1930 Hubley Ferris Wheel Bank on base, estimated at $8,000-$12,000.

Every imaginable type of “jigger” toy is found in the Liffman collection, as well as some of the scarcest early games. A circa-1895 black dandy ball-toss game is made of papier-mache, cardboard and wood, and is estimated at $3,500-$5,500.

An outstanding selection of European toys is highlighted by a 15-inch-tall Doll et Cie steam-accessory lighthouse. All hand-painted, it comes with two small steam-powered boats that circumnavigate the structure when the toy is activated. The colors of paint chosen for this beautiful French production include teal, coral, mustard yellow and a burnished red on the simulated-brick basin. Estimate: $6,000-$9,000.

The ultimate prewar Japanese tinplate auto, a circa-1930 KY Franklin 2-door car with working headlights, yellow-pinstriped turquoise body and deep blue chassis, will likely command a winning bid of $9,000-$12,000. It will be followed by an additional assortment of still banks, which will close out the session. 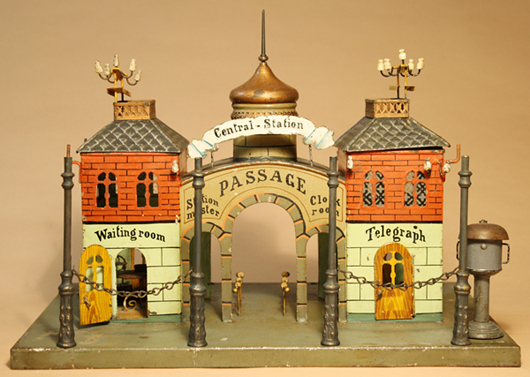 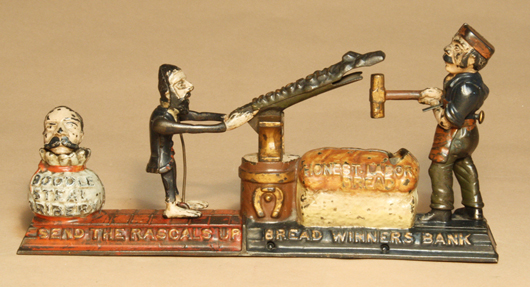 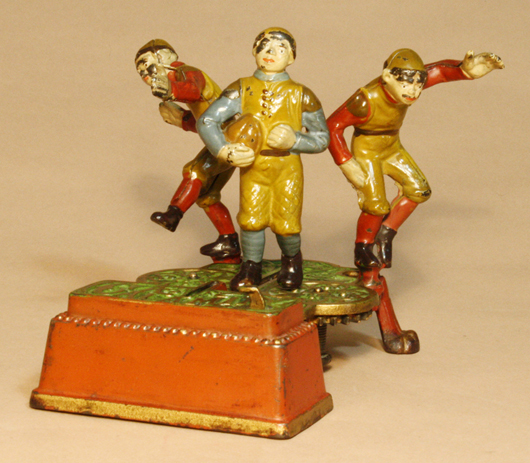 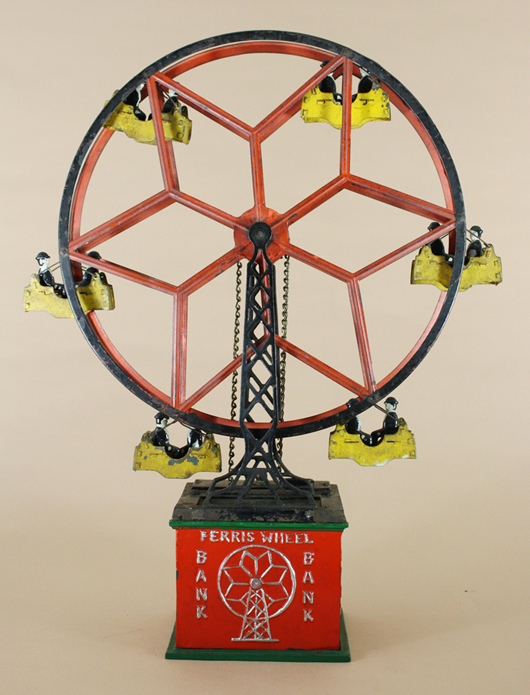 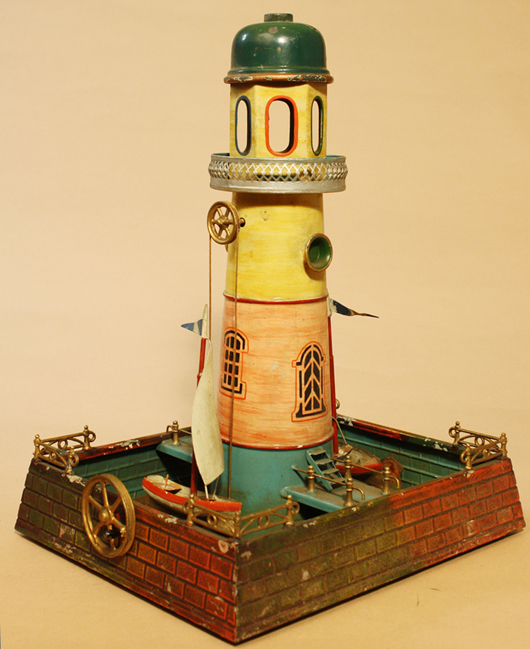 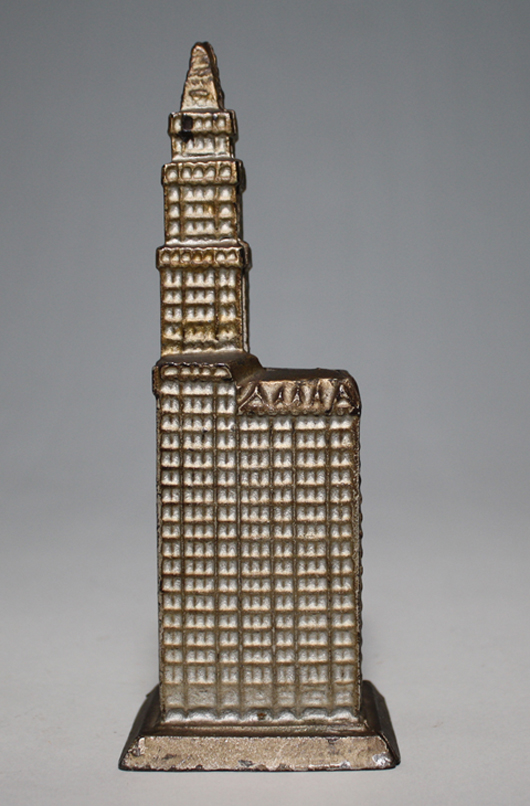 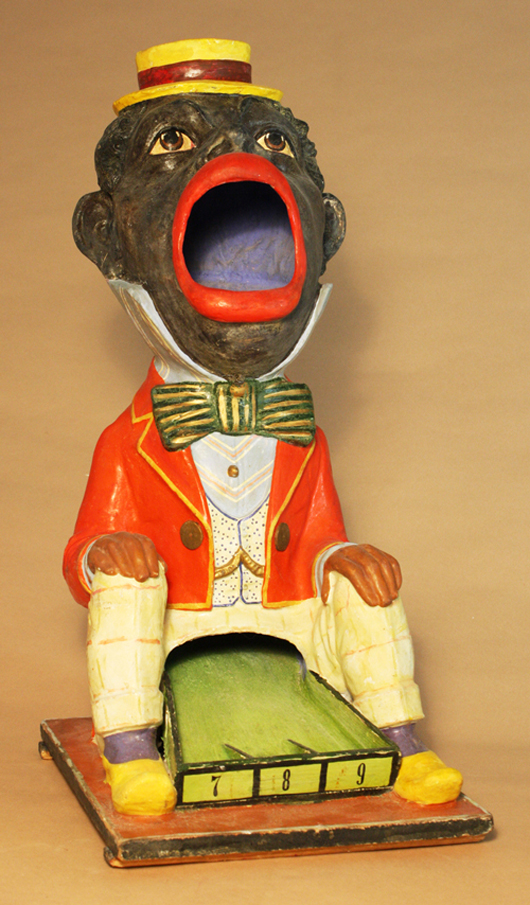 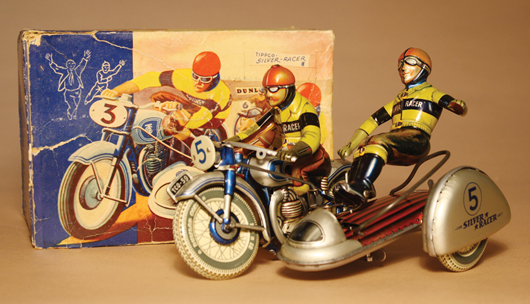 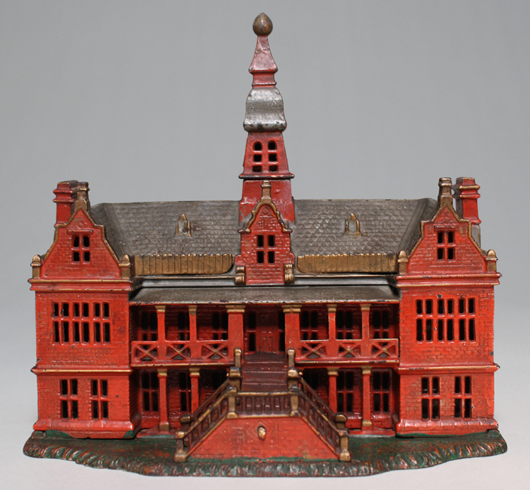