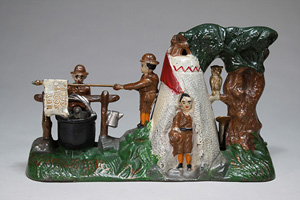 TIMONIUM, Md. – Collectors will be gathering in suburban Baltimore on June 1st to inspect the real estate in an upscale “neighborhood” of early mechanical and still banks with an architectural theme. High-end cast-iron banks replicating various types of buildings – some generic and some immediately identifiable as famous structures – are the featured highlight of RSL Auction’s 500-lot sale to be held at Richard Opfer’s gallery in Timonium. The event will begin at 11 a.m. Eastern time, with Internet live bidding through LiveAuctioneers.com.

Numerous rare examples will make an appearance in the auction, including at least 12 banks that were formerly in the collection of the late Donal Markey, an influential dealer and collector of antique toys, banks and folk art who passed away in March 2010. Several J&E Stevens painted Cupola banks are among those in the Markey group. All are in beautiful condition and some are finished in unusual colors. Their estimates range from $1,400 to $1,800.

“As any experienced bank collector will tell you, Don Markey was a stickler for condition and had a fantastic eye for original paint,” said Ray Haradin, partner in RSL Auction Co.

Another bank with provenance from the Markey collection is a George Brown early American tin production replicating the Bunker Hill Monument. Manufactured around 1876, it boasts pristine-plus original paint and says “Bunker Hill” under the base. It is expected to reach $3,000 to $4,000. Also boasting a Markey-collection pedigree is a near-mint Home bank by Judd Company. It is an extremely rare multicolor version painted in yellow and red. Bidding could reach $2,500-$3,500 on auction day.

Approximately 130 architectural still banks were consigned to the sale from a single-owner collection. A highly appealing group, it includes all three versions (small, medium and large) of a House with Bay Windows, a form that is one of the most sought after of all Stevens still banks.

“Most collectors don’t even have one of these particular banks, including myself,” said Haradin. “To have the opportunity to bid on one of each size in the same auction is unheard of.” The largest of the three is expected to fetch $3,000-$4,000.

Another gem is the circa-1892 cast-iron Masonic Temple bank made in Chicago. Haradin noted that it is only the second bank of its type that he has ever seen for sale, either privately or at a public venue. He has no doubt it will realize $3,000-$4,500 at auction.

An automotive shape that could bring top money is an Arcade flat-top Limo bank in a green with white motif. It is a fine example of what actual Pittsburgh taxicabs looked like in the 1920s and is emblazoned with a Grant Street address and 4-digit telephone number. This particular bank has been chosen to open RSL’s June 1st sale and could knock down $5,000-$7,000.

Still banks will be followed by a beautiful lineup of mechanical banks with excellent provenance. A classic Boy Scout Camp mechanical, ex Larry Feld collection, is one of the finest known examples of its type. It has a presale estimate of $20,000-$30,000. Also, one of only three known Dog on Turntable mechanical banks in red, white and blue paint, ex Markey collection, is in pristine condition and estimated at $4,000-$6,000.

From the prestigious Bob Brady collection comes a circa-1882 brass pattern for a Stevens Two Frogs bank. “All patterns are very rare, but this is one I’ve never seen before, and to my knowledge, it’s the only one known that is complete,” said Haradin. Estimate: $8,000-$12,000.

Two examples of Stevens’ desirable architectural bank known as “Panorama” will be offered. One variation is white with blue and red trim, while the other, green with red trim, has provenance from the revered Rich Garthhoeffner collection. Bright and in near-mint condition, the latter bank is entered in the sale with a $20,000-$30,000 estimate.

In addition to banks, there will be an excellent selection of antique toys from which to choose. Cast-iron horse-drawn and automotive toys; and early American tin clockwork productions are in the mix. Additionally, 60 European toys will be up for bid, from manufacturers such as Lehmann, Martin, Ingap, Distler and Eberl. A sporty French JEP Torpedo Rocket open car with original box is estimated at $3,000-$4,000.

“The toys in this sale came from a number of small collections, but when brought together as one grouping, they are very impressive. I think toy buyers will be pleasantly surprised,” Haradin said.

All forms of bidding will be available for RSL’s Saturday, June 1, 2013 auction, including live via the Internet through www.LiveAuctioneers.com. The sale will begin at 11 a.m. Eastern time. A complimentary lunch will be provided to all attendees. 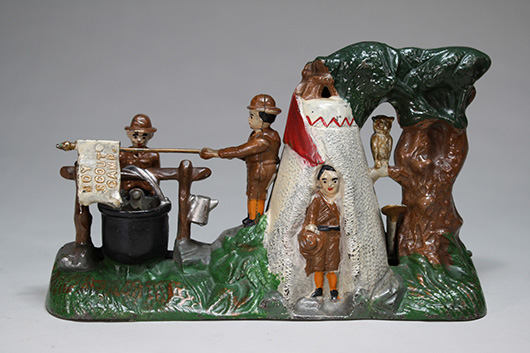 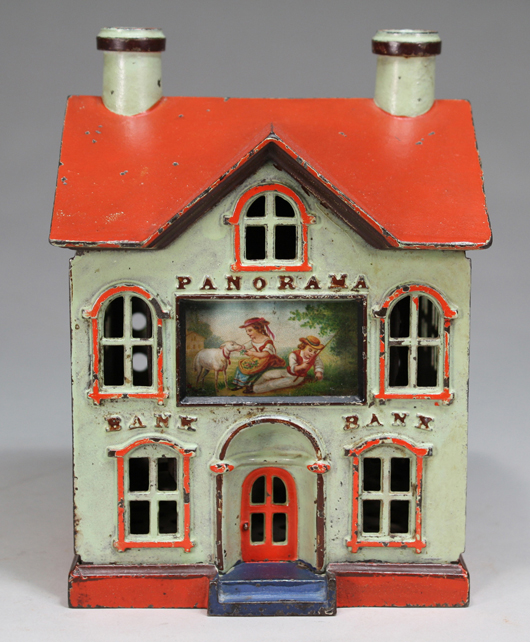 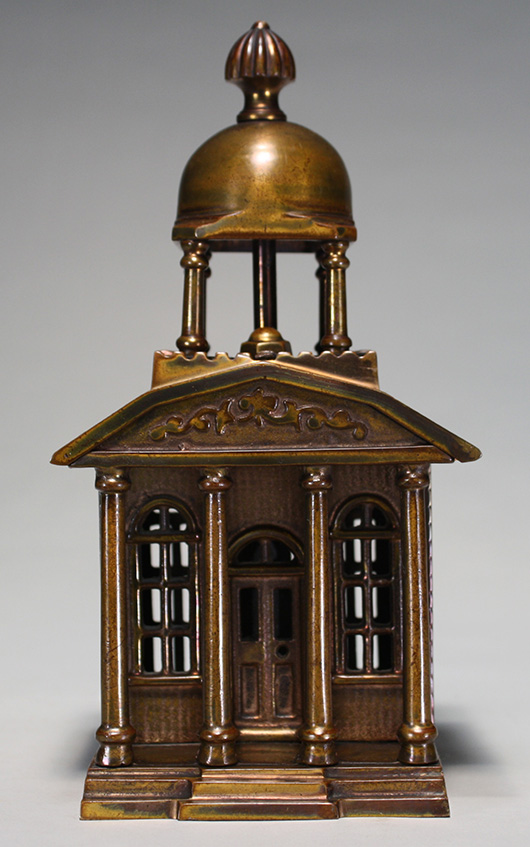 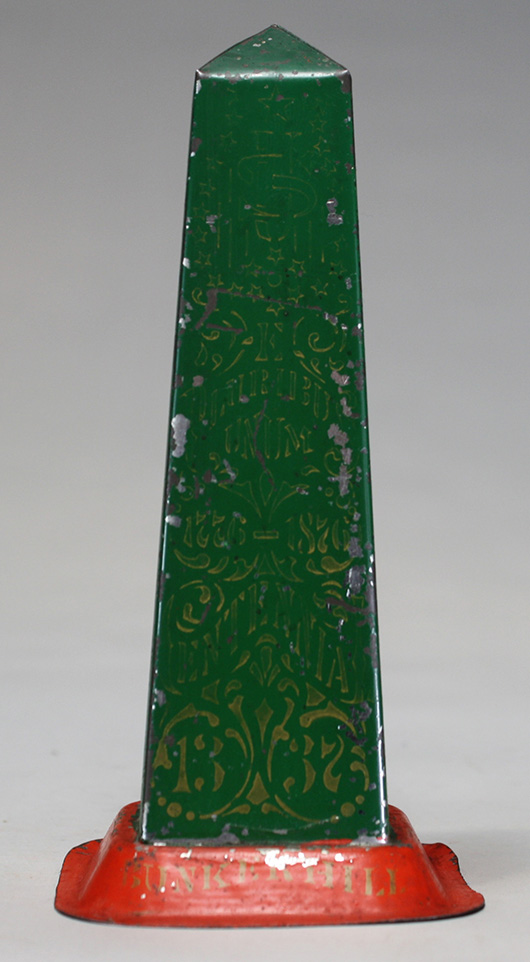 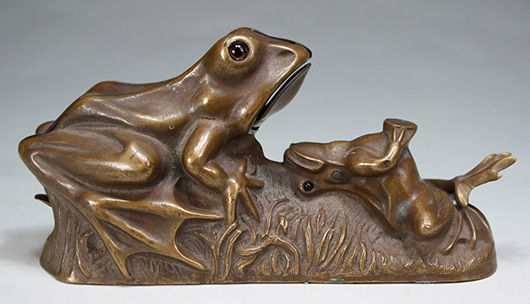 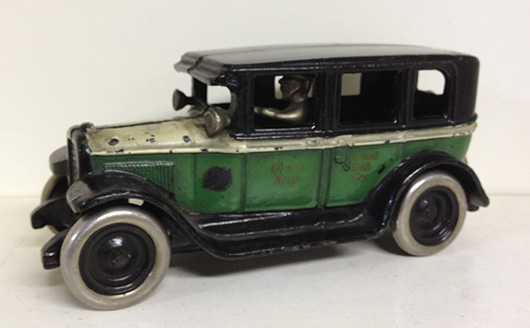 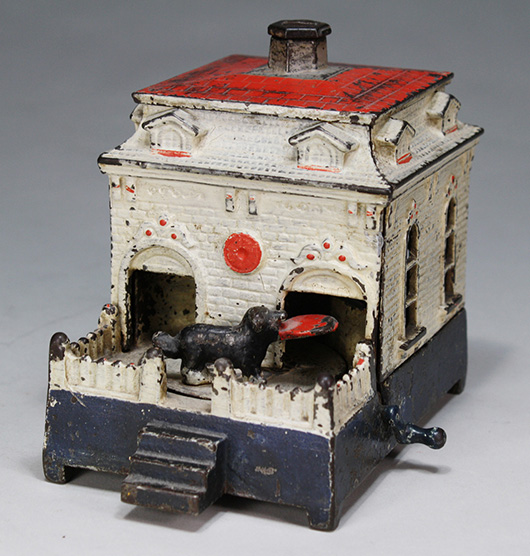 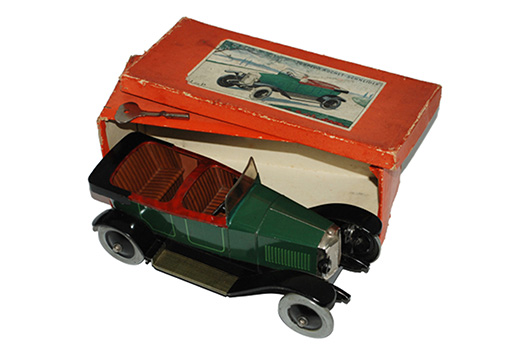 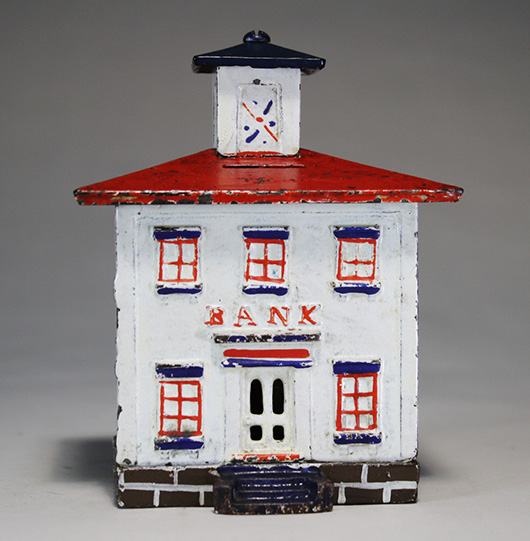 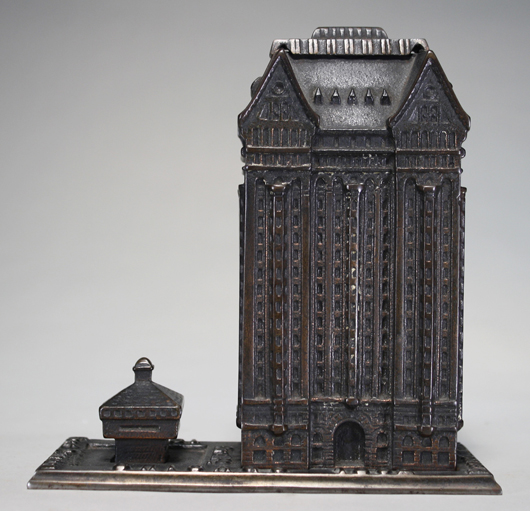