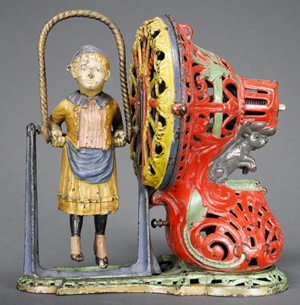 “To still bank collectors, there is no more important book than the one that Andy and Susan Moore wrote. Its publication is what brought still banks to national prominence and got the hobby rolling in a big way,” said RSL partner Ray Haradin. “Collectors are going to be very excited about the prospect of bidding on book examples from this famous, long-held grouping of banks. There are three or four world-class examples of banks that haven’t been on the market in ages.”

Like so many early bank collectors, Andy Moore (1937-1986) made his living in the financial world. For 11 years, he served as president of Beverly Bank in Chicago. He and his wife, Susan, built their bank collection together over a 17-year period and displayed it with pride in their comfortable suburban home.

“In 1993, much of the Moore collection was sold, but the family retained the cream,” Haradin said. “That’s what we’ll be selling.”

The Moore portion of the sale numbers 130 banks – 50 mechanicals and 80 stills, most of which are actual examples shown in “The Penny Bank Book.” That includes the finest-known circa-1890 Transvaal Money Box, which was chosen for the book’s cover.

One of the top lots, a prized Circuit Rider bank, depicts a man – perhaps a traveling minister, as the name would suggest – on a horse. It is technically a semi-mechanical bank, Haradin explained, because it has a retainer that holds a coin in place until the horse is rocked forward and the deposit is made. Its presale estimate is $15,000-$25,000.

Within the Moore collection are examples of nine of 13 figural “safe” banks manufactured around 1895 by the Chicago company Harper. They include Little Red Riding Hood, Santa Claus, a carpenter, and the first version with Old Mother Hubbard on its façade that Haradin has ever seen.

The finest of three known examples of a Board of Trade still bank will be offered. Its stock market theme depicts a bull and bear fighting over a sack of money.

Of the mechanicals coming directly from the Moore collection, one of the best is a Bill E. Grin, made by J. & E. Stevens around 1910. There are also some rare examples of spelter banks, which continue to attract new enthusiasts at each successive RSL sale. A highlight among the spelters is an appealing bear with mallet and tin drum.

The June 7th sale will mark the second occasion on which RSL has represented Ohio collector Bill Robison at auction. “We had the privilege of selling Mr. Robison’s still bank collection six years ago. Now he has chosen to sell his collection of mechanicals, which includes some very rare and beautiful banks, as well as some color variations we’ve never seen before,” said RSL partner Leon Weiss. One of those rare variations is a Hen and Chick bank that features a brown hen on a red base.

Because Robison tended to buy in small regional auctions as opposed to larger, better-publicized sales, many of his banks will be “new” to the marketplace and to collectors, even those who are advanced. They’ve sat quietly on Robison’s display shelves for decades, some since the 1970s. “It’s a fresh collection, full of surprises,” Weiss noted. One of those fresh surprises is an exquisite 5-hole variation of the Hold the Fort bank.

A pedigreed entry from the Robison collection is the Uncle Sam bank that was first runner-up in a competition hosted by the Mechanical Bank Collectors of America in the late 1980s. By means of comparison, the winning bank that year belonged to Steven and Marilyn Steckbeck, leading lights of the hobby long known for their superior collection.

Much more awaits bidders at the June 7th auction, including the last of the Rich Garthoeffner mechanical bank collection. “As everyone in business knows, Rich Garthoeffner is a revered Americana, folk art and toy dealer from Pennsylvania, and he has never compromised on quality,” said Steven Weiss, the third partner in RSL Auctions. “The banks in his private collection are exceptional by anyone’s standards. An example would be the Stevens Girl Skipping Rope bank that Mr. Garthoeffner purchased in the early 1980s at Parke-Bernet in Manhattan. At the time, the price he paid for the bank set an auction record.”

Other gems in the Garthoeffner group include a Stevens bank known as Professor Pug Frog’s Great Bicycle Feat, with strong colors and a beautiful patina; and two near-mint buildings – a Magic Bank and a Novelty Bank.

Filling out the high-rent neighborhood is a very fine consignment from an architectural bank collector in New York City. “We’ve been selling selections from this consignor over the past two years. This time he has given us 30 outstanding architectural banks, including a superb Boston State House and a very rare painted Chicago Bank that has a flag embossed ‘Chicago’ overhead,” Steven said.

RSL’s Saturday, June 7, 2014 auction will take place at the company’s new gallery located off I-78 at 295 US Hwy 22 East, Whitehouse Station, NJ 08889. Look for the “One Salem Square” sign. Internet live bidding will be available through LiveAuctioneers.com. 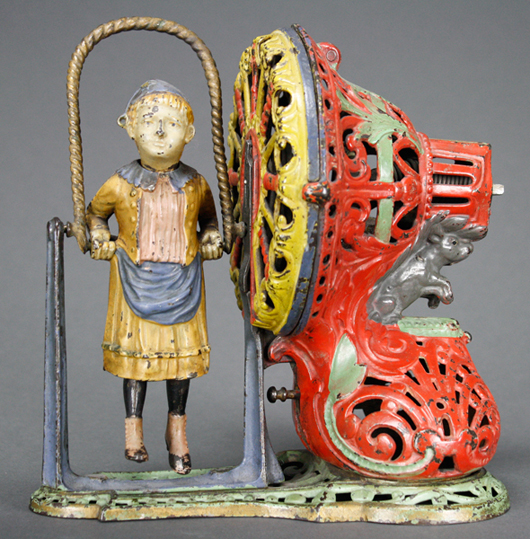 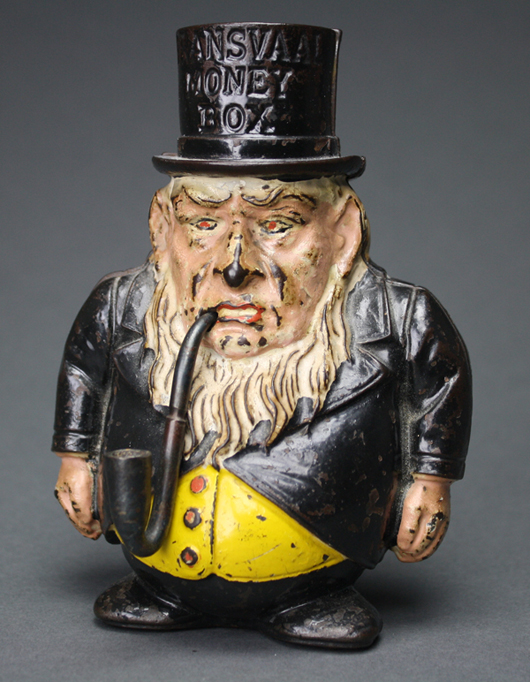 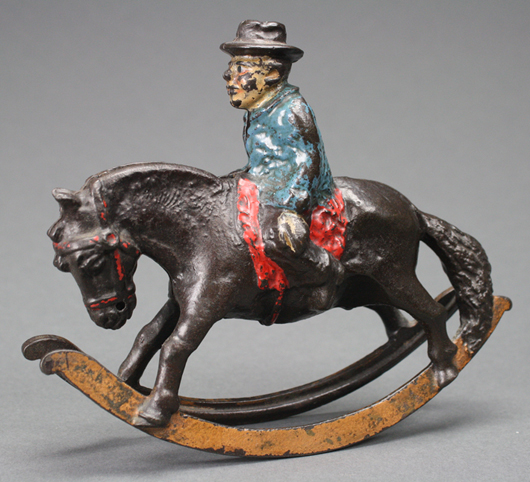 An extremely rare and desirable semi-mechanical Circuit Rider is one of the most highly prized banks in the Moore Collection. RSL Auction Co. image

Rarest of the rare, the Moore selection of Harper safes is second to none. RSL Auction Co. image 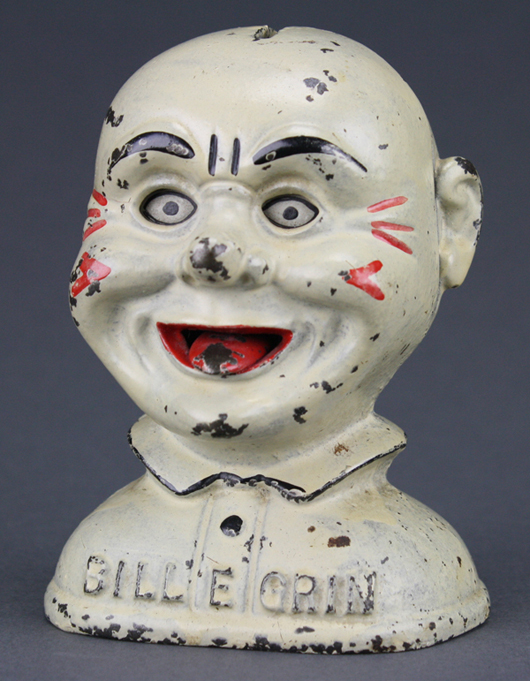 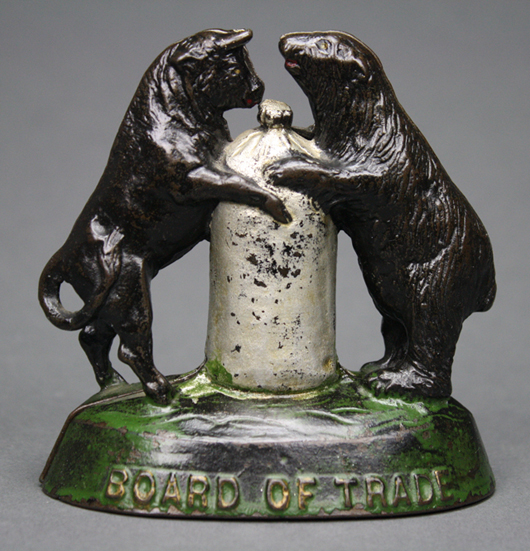 An investment icon, this Board of Trade bank is the best of the three known examples. RSL Auction Co. image 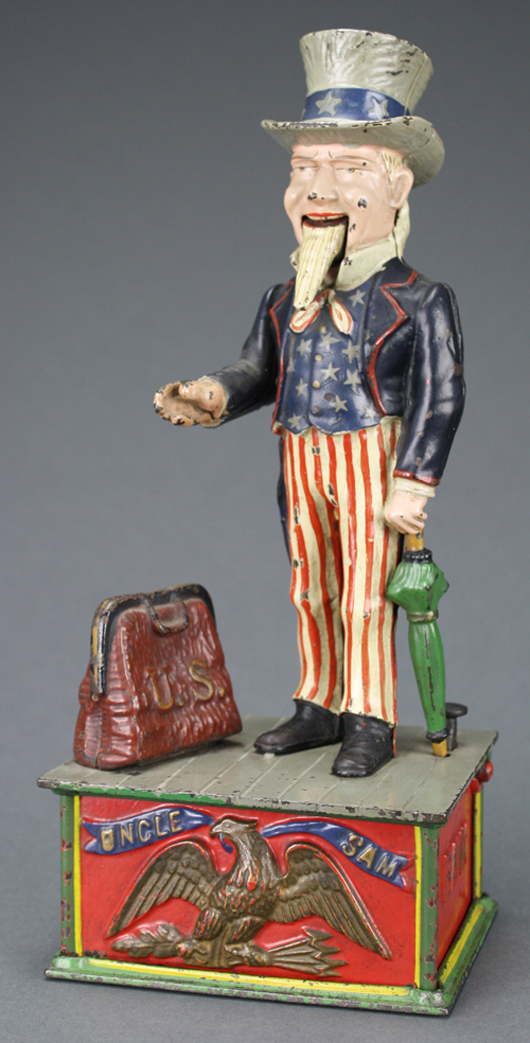 One of the finest Uncle Sam banks in the land. RSL Auction Co. image 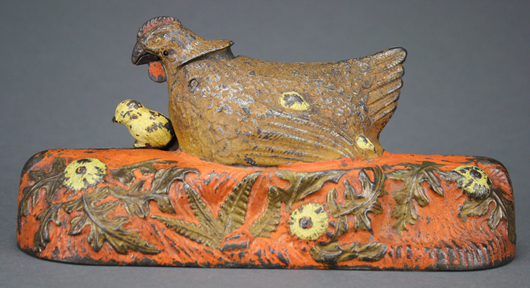 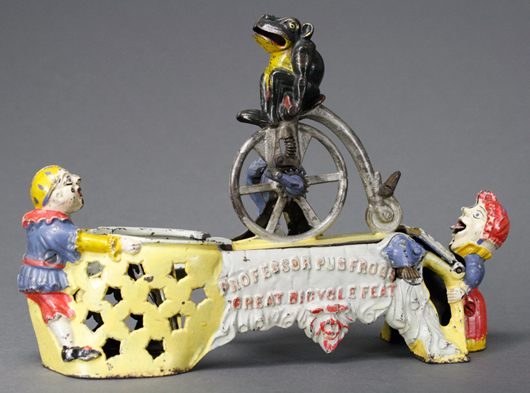 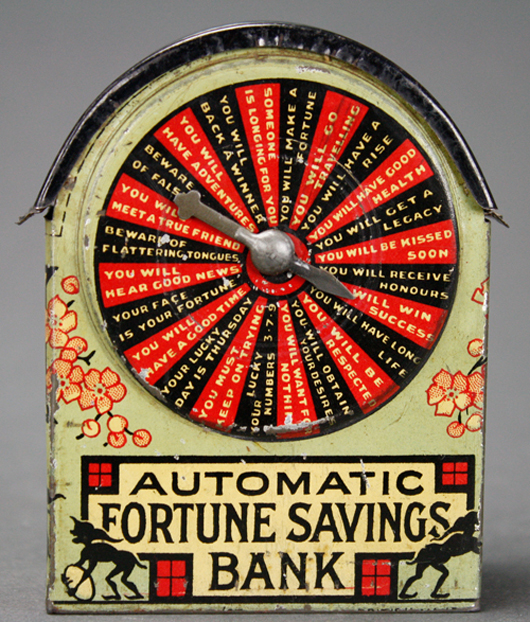 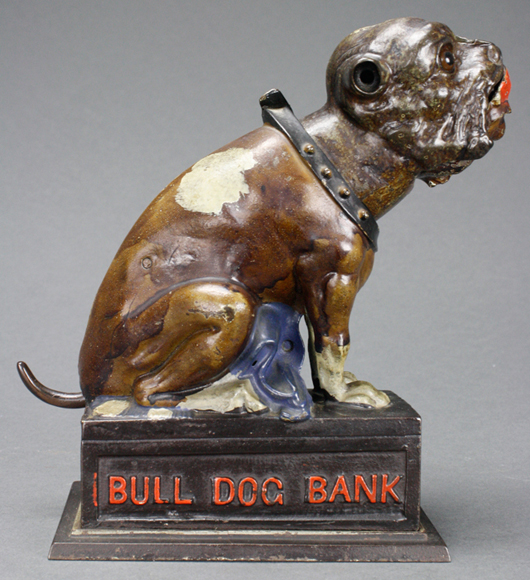 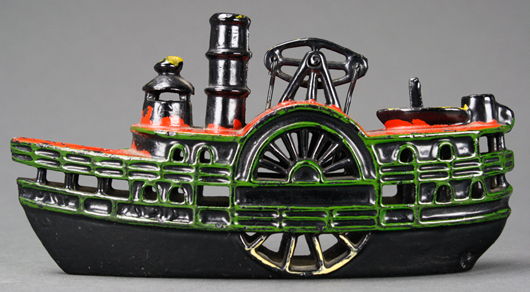 ‘7 Block’ of Mich. prison to reopen this summer as museum