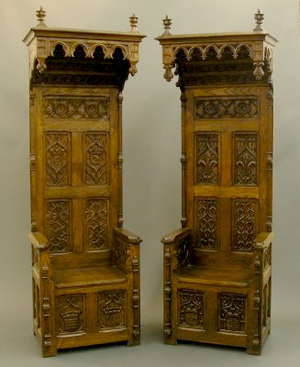 ANN ARBOR, Mich. – For many years Schmidt’s Antiques was a regular exhibitor at the Ann Arbor Antiques Market. After a four-year hiatus Schmidt’s is back at the monthly market at the Washtenaw County Farm Council Grounds, but as an auction rather than a dealer.

The role is nothing new for Chuck Schmidt, whose company has been in the auction business since 1911. “My great-grandfather was as auctioneer in New York before moving to Michigan,” said Schmidt, who also conducts auctions regularly at their facility at 5138 W. Michigan Ave. in nearby Ypsilanti.

“Our Schmidt’s Market Sundays are special because they have a focus like a one-owner collection,” said Schmidt, who’s next auction held in conjunction with the Ann Arbor Antiques Market will be June 21. LiveAuctioneers.com will provide Internet live bidding.

The auction that day will include numerous pieces of fine English and French Gothic Revival Furniture from the late 19th and early 20th centuries. One might assume such furniture would be right out of the shipping container, but Schmidt said this is not the case.

“A man from Flint, Mich., liked this style of furniture and the accessories. All of it came out of his house,” said Schmidt. “He was very selective and only collected the best pieces.”

One of those fine examples is a late 19th-century Gothic breakfront bookcase by Mercier Freres, Paris. Standing 9 feet 1 1/2 inches high, the walnut bookcase has a long central beveled glass door and two side doors separated by full-length carved columns. It has a $4,000-8,000 estimate.

What’s more fitting for a man’s own castle is a pair of English Gothic Revival oak throne chairs made in the early 1900s. With extensive hand-carved decoration and hooded tops, the chairs are 90 inches high. In original finish, the pair is expected to bring $4,000-$6,000.

As Gothic was the accepted style for churches, it is fitting to have a pulpit in the sale. At 70 inches tall, the pulpit comes with a separate two-step speaker’s platform. The lot has a $2,000-$4,000 estimate.

The auction will start at 10 a.m. with two dozen pieces of Irish Belleek. Among the best examples is a 7-inch-high jardinière with finely detailed applied floral decoration. With a second black printed mark (1891-1926), the jardinière has a $400-$600 estimate.

Winding down the sale will be a collection of about two dozen tin lithograph toys, including a Li’l Abner Dogpatch Band and an Amos ‘n’ Andy Taxi.

A big boy’s toy is a 2004 Harley-Davidson Dyna Glide Low Rider motorcycle, having been ridden only 24 miles by the collector of the Gothic Revival furniture, said Schmidt. In showroom condition, the motorcycle has an $8,000-$12,000 estimate.

Persons attending the auction will be required to pay the $6 regular admission to the Ann Arbor Antiques Market. Successful bidders at the auction will have the admission fee refunded, said Schmidt. For detail, phone 734-434-2660.

The fairground is on the Ann Arbor-Saline Road between Ann Arbor and Saline, Mich. 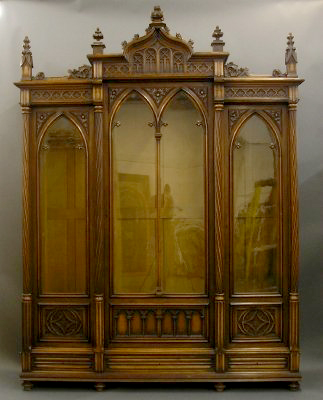 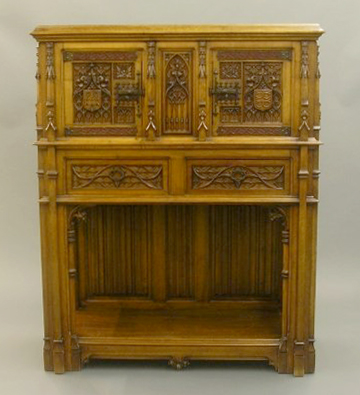 Extensive hand-carved decoration and original wrought iron hardware set off this French Gothic Revival cabinet. Dating to the turn of the 20th century, the cabinet has a $4,000-$6,000 estimate. Image courtesy Schmidt’s Antiques. 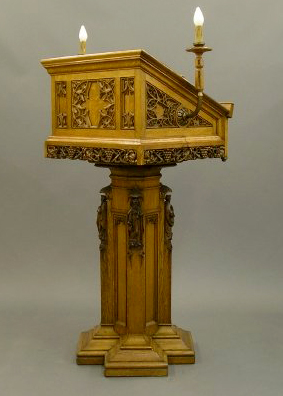 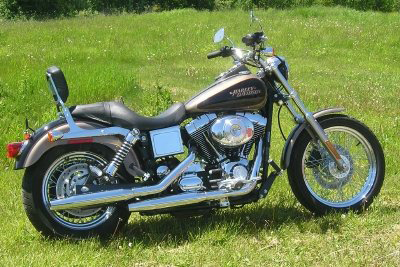