From a London collection is this 19th-century Great Lakes beaded bandolier bag, which has a $2,500-$5,000 estimate. Image courtesy Seahawk Auctions.

“Unlike a chief, who would have commissioned someone to carve a rattle, the shaman would have carved this rattle himself. That’s how he gets the power to heal. He actually used this rattle in ceremonies,” said Bill Neville of Seahawk Auctions.

The rattle, which is 12 3/4 inches long, depicts a reclining shaman holding the large horns of a goat or sea monster. Carved around 1880, the rare rattle is from the June Bedford Collection and has been exhibited in London, said Neville. It is estimated at $27,600-$55.300 U.S.

Another rarity in the auction is an early Wasco burl bowl carved with two skeleton figures. The Wasco are a Chinookan tribe that formerly lived on the south side of Columbia River, in what is now Wasco County, Ore. The 13 1/2-inch high bowl was used as a mortar and will be sold with a basalt pestle.

“I don’t know if it had ceremonial use or it was an everyday piece, but I have never seen the skeleton design before,” said Neville. The bowl has an estimate of $5,500-$11,000.

An exceptionally large Western Apache gathering basket from the turn of the 20th century is expected to fetch $6,900-13,8000. The design features 32 stacked figures, 20 crosses and four deer in a complex checkered diamond cross pattern. It is in very good condition and is 10 3/4 inches high and 20 inches in diameter.

Numerous beaded items will be offered including a 19th-century Great Lakes beaded bandolier bag from the Michael Johnson Collection in London. In fine condition, the bag is 40 inches high and 13 1/2 inches wide. It carries a $2,500-$5,000 estimate.

A Northwest Coast carved beaver-form frontlet inlaid with abalone is in fine condition. This ceremonial piece was worn against the forehead, but did not cover the face. It measures 8 1/2 inches wide by 8 1/4 inches high. Its estimate is $2,900-$6,000.

View the fully illustrated catalog and register to bid absentee or live via the Internet by logging on to www.LiveAuctioneers.com. 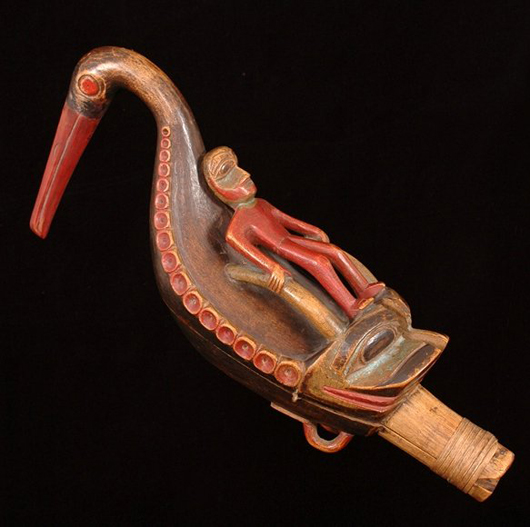 A Tlingit shaman carved this oystercatcher rattle for ceremonial use in healing the sick. Image courtesy Seahawk Auctions. 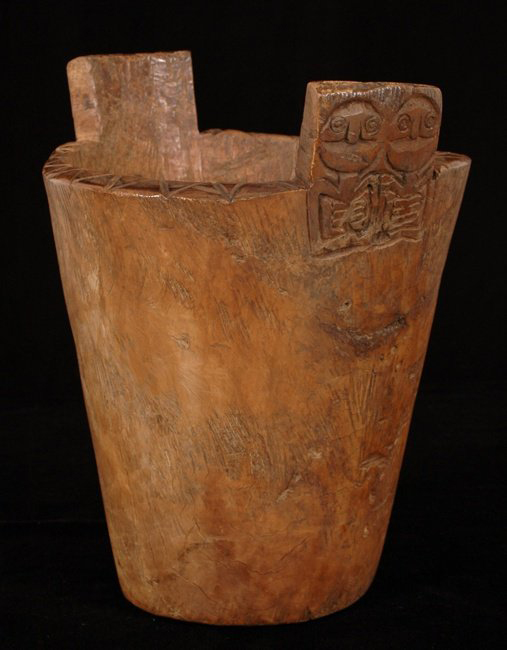 The twin skeleton design at the top of this Wasco burl bowl is unusual. The 13 1/2-inch high bowl was used as a mortar. Image courtesy Seahawk Auctions. 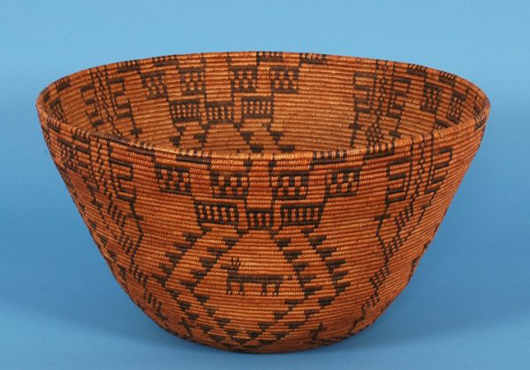 At 20 inches in diameter this Western Apache gathering basket was an armful. It is estimated at $6,900-$13,800. Image courtesy Seahawk Auctions. 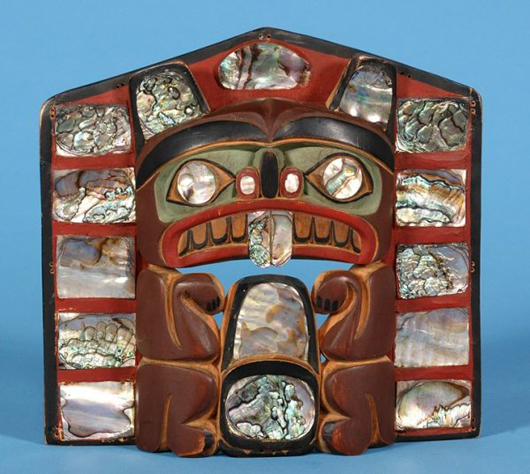 Inlaid abolone adorns this beaver frontlet, which a chief would wear on his forehead. Image courtesy Seahawk Auctions.