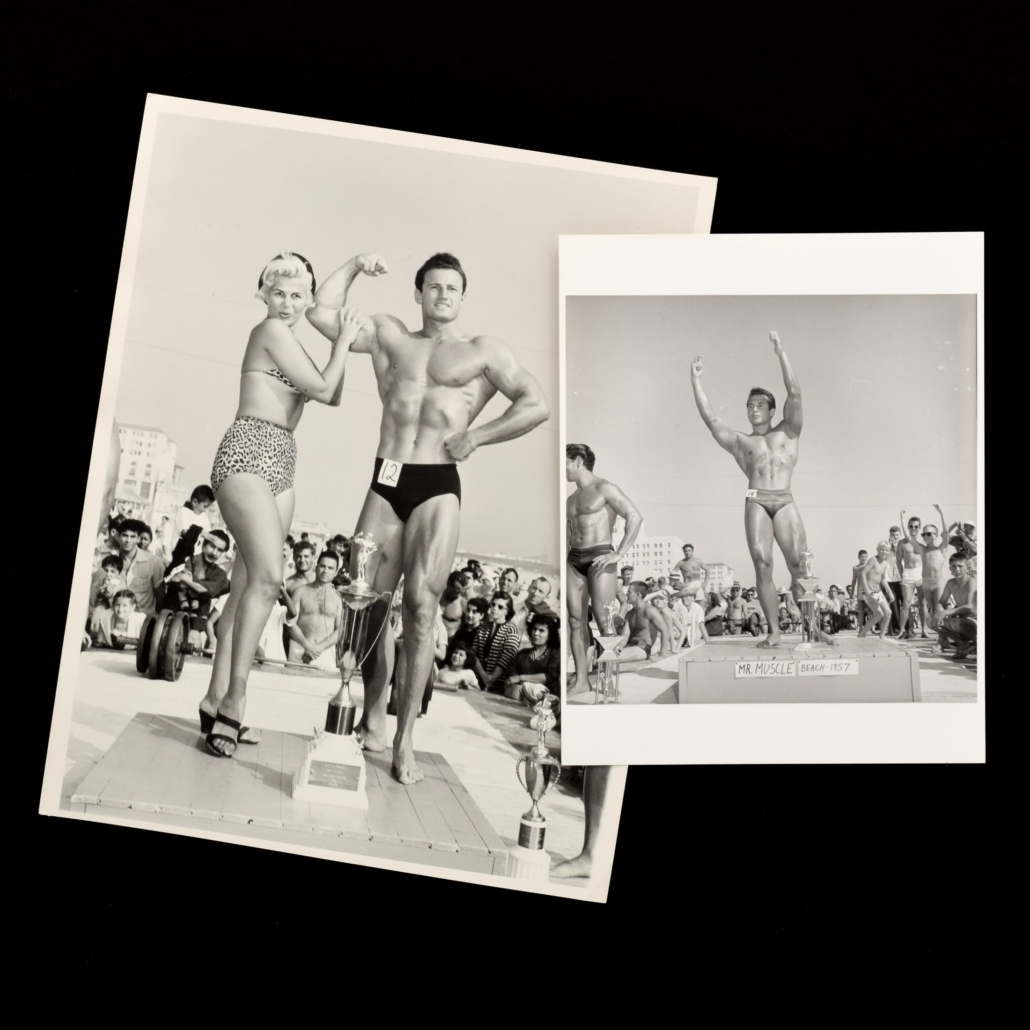 WEST PALM BEACH, Fla. – On September 26, Urban Culture Auctions (UCA), a division of Palm Beach Modern Auctions, will sell a significant archive of 1950s/’60s “beefcake” photos taken by Bruce Bellas, known professionally as Bruce of Los Angeles. More than 200 lots of vintage prints, negatives, slides, real-photo greeting cards, and posing props will be auctioned, with absentee and Internet live bidding through LiveAuctioneers. Most of the photos, which played an important supporting role in the foundation of America’s gay movement, were taken in Bellas’ studio, while a smaller number reflect Southern California’s influential fitness movement, which celebrated the male physique.

Bellas’ artistic studio photos of male nude models and bodybuilders were in the vanguard of gay culture, triggering censorship challenges

“Around the same time Playboy magazine was launching its controversial first issue with a nude Marilyn Monroe centerfold, Bruce Bellas was creating his own provocative art – photographs of the male anatomy,” said UCA auctioneer and co-owner Rico Baca. “In addition to being an accomplished studio photographer, Bellas was a well-known presence at bodybuilding and weightlifting competitions. He was one of the earliest photographers of gymnastics and acrobatics at LA’s Muscle Beach.” 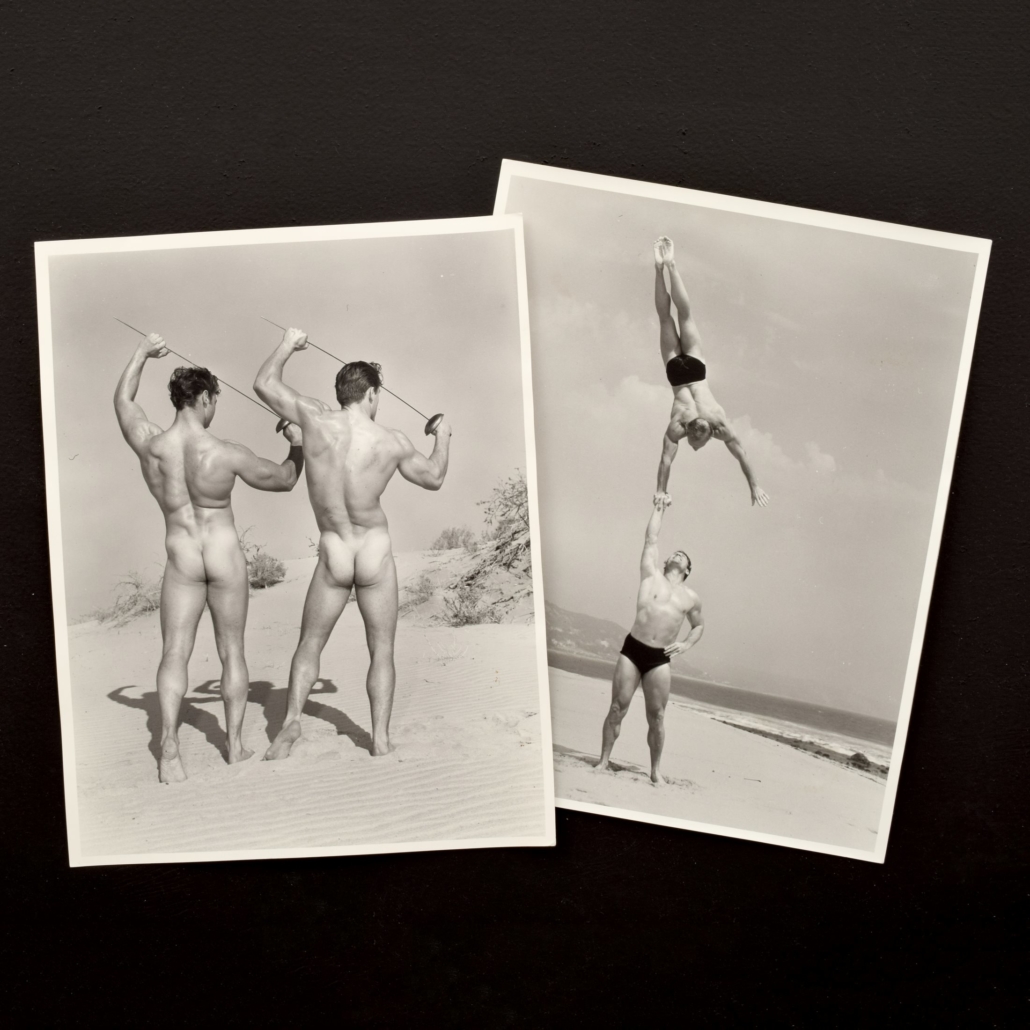 Located at the south side of Santa Monica Pier, Muscle Beach gained a national reputation with strength lifters, who were attracted to the area’s burgeoning physical fitness culture. “Vic Tanny, who pioneered the ‘gym chain’ concept, opened his first gym only two blocks from Muscle Beach. That solidified the area’s reputation as the Mecca of American bodybuilding. Bruce Bellas was right there with his camera to document its evolution as an adjunct to his studio photography, which focused on the male physique,” Baca said.

Born in the horse-and-buggy days in a small Nebraska town, Bellas grew up to become a chemistry teacher but always enjoyed taking pictures on farms and at athletic events, with an emphasis on the men in those settings. After numerous road trips to California and its famous Muscle Beach, Bellas realized his true calling was photography, and he took the necessary steps to make his hobby his new profession. He had a natural flair for composition and lighting, and at Muscle Beach there was easy access to superstar bodybuilders – most of whom were not gay, but who were proud of their bodies and willing to pose for him at his studio. Bellas’ work appeared in Joe Weider’s “muscle” magazines and later in his own magazine The Male Figure, which he launched in 1956. 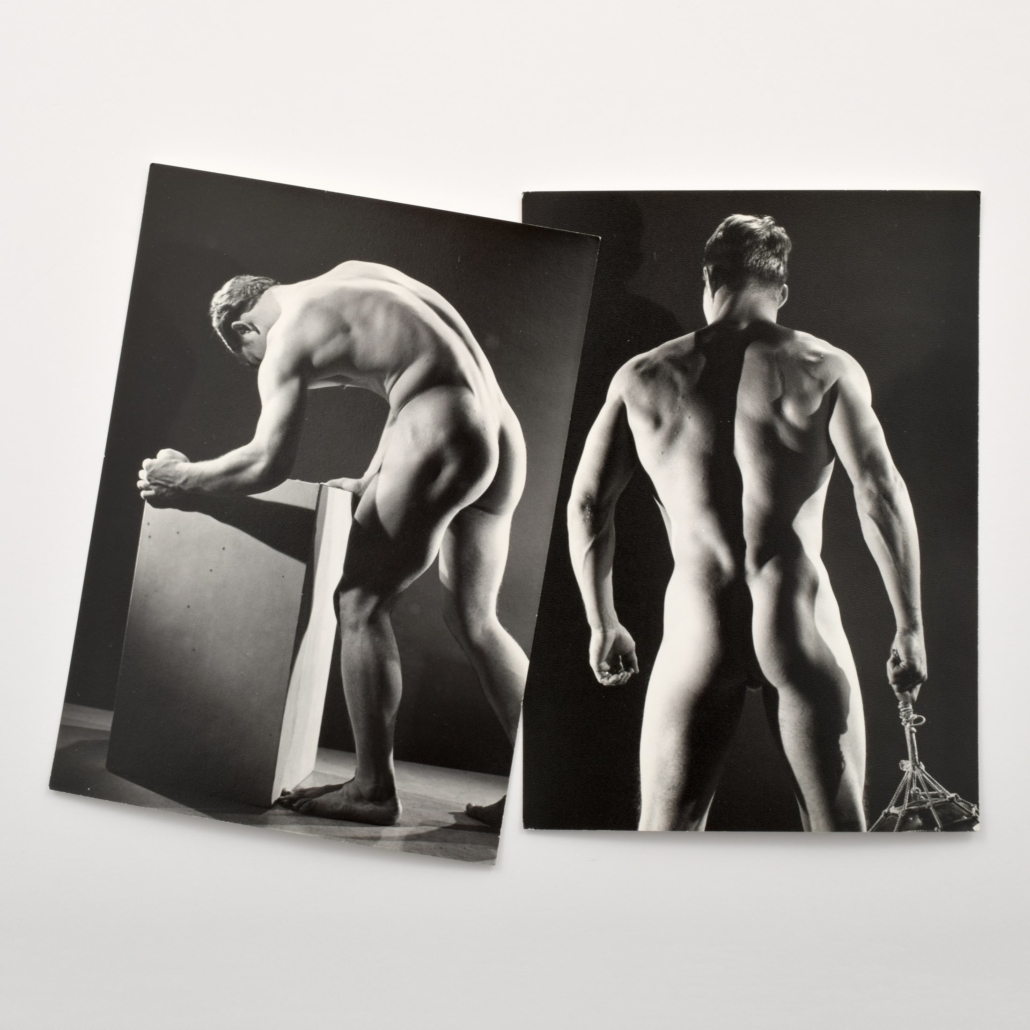 “Such magazines faced strong opposition and censorship, even though there was a demand for them. To closeted men everywhere, they sent a message that ‘you’re not alone.’ They were an introduction to a gay community that was just starting to come out of the shadows,” said Baca. “It took courage to be a part of the movement. Some publishers, like Bob Mizer (1922-1992), the founder of ‘Physique Pictorial’ magazine, even did jail time.”

Bellas’ influence on contemporary physique photography is acknowledged in the work of Herb Ritts (1952-2002), Bruce Weber (b. 1946-), and Robert Mapplethorpe (1946-1989). The Bellas archive featured in UCA’s September 26 auction is the property of art director Dimitri Levas, who was Mapplethorpe’s close friend and set stylist, and who currently serves on the board of The Robert Mapplethorpe Foundation. He was also a set designer for Bruce Weber. 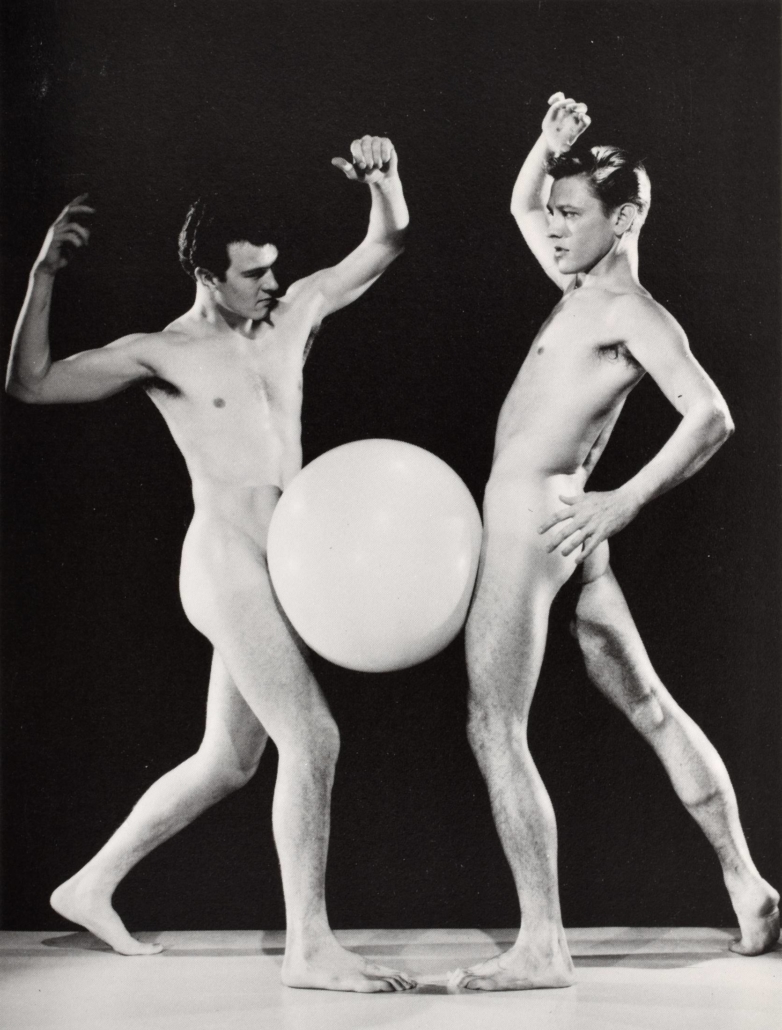 “Most of the photographs in the auction are black and white, which was the standard in those days,” said Baca. “They’re beautiful, artistic images of men, including actor Joe Dallesandro, who starred in Andy Warhol movies and is considered the most famous male sex symbol of both gay subculture and American underground films of the 20th century.” Sixteen lots of Dallesandro photographs are entered in the auction, several accompanied by enlargeable negatives [43 auction lots include negatives]. Each of the Dallesandro lots is estimated at $1,000-$2,000. 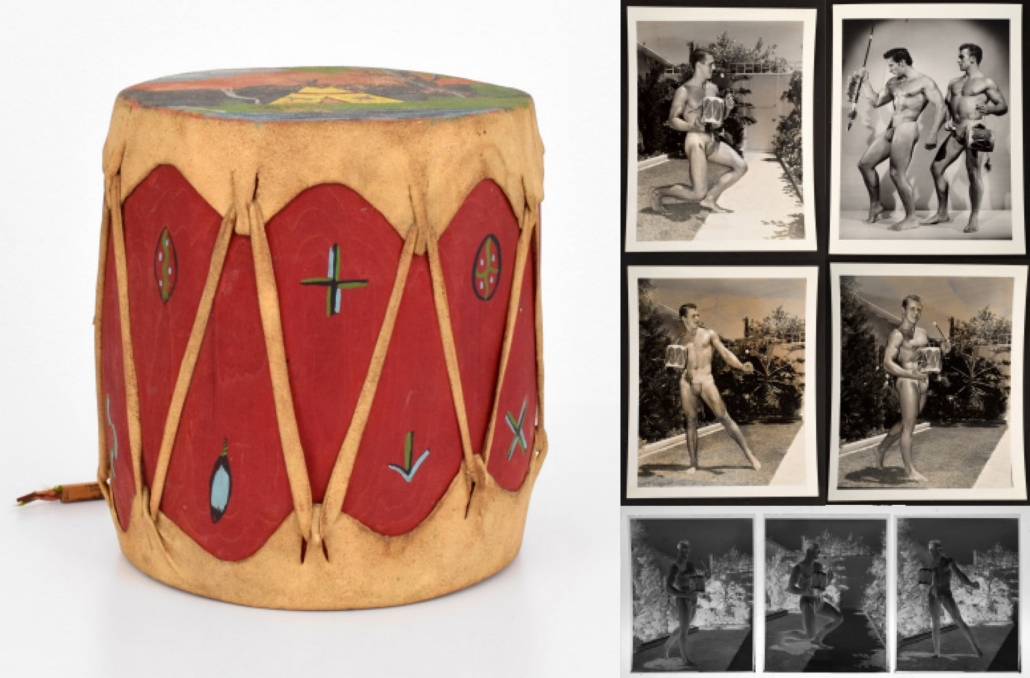 Photo lots that include a posing seat or other studio props are also expected to be among the top sellers. Lot #4 consists of four nude photos and the actual demilune seat used in those photos. Lot #3 contains four male nude photos and the Native American-style tom-tom drum that Bellas used in those shots and others, and the sale’s opening lot includes a Roman-style column and three photos of nude models posing with the prop. Each of the three lots is estimated at $1,000-$2,000. 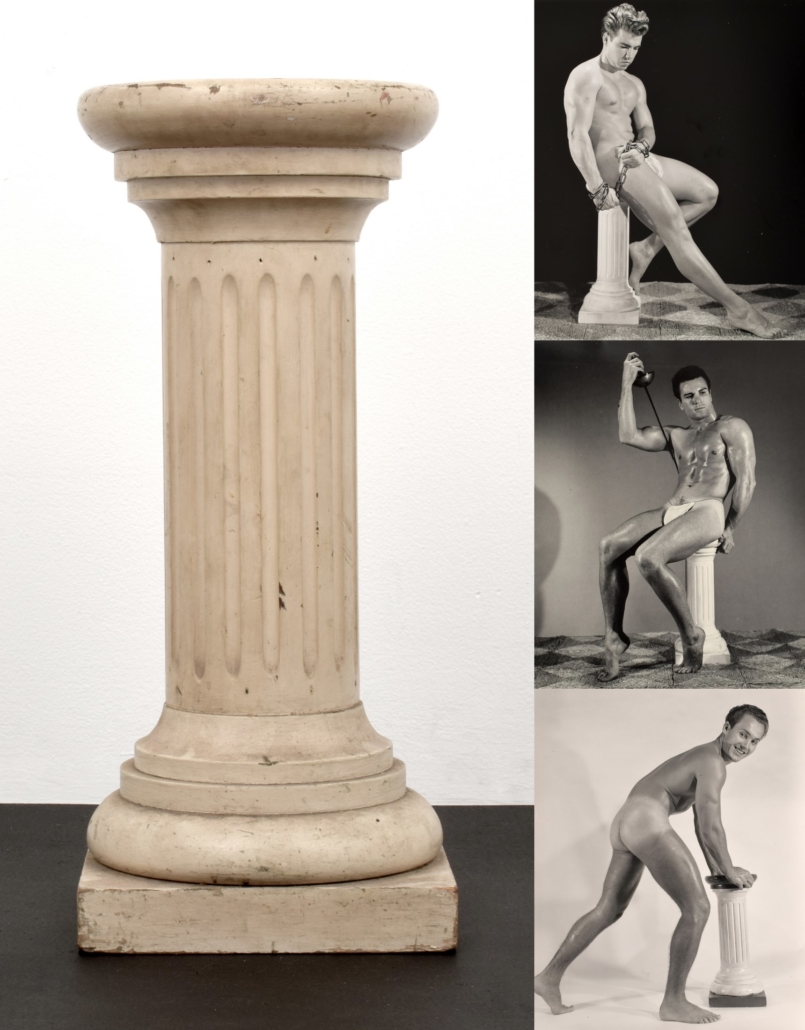 Urban Culture Auctions’ Thursday, Sept. 26, 2019 sale of The Bruce of Los Angeles Archive: Male Physique will begin at 12:00 noon US Eastern Time. Bid absentee or live via the Internet through LiveAuctioneers. For questions about any item in the auction, call 561-586-5500 or email uca@modernauctions.com.