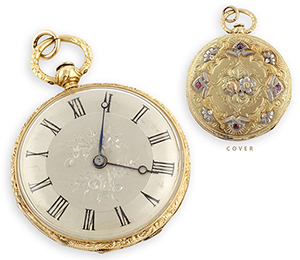 PHILA., Pa. – Since 1937, The Silver Shop in Princeton, New Jersey, has catered to a selective clientele that included not only blue-blooded Princetonians but also celebrities, politicians and design luminaries from around the world. America’s oldest retail silver specialist in continuous operation, The Silver Shop was the sort of quietly elite establishment where, in its earlier days, one might bump into Sir Laurence Olivier, Albert Einstein or members of the Guggenheim family browsing the upscale wares. Later, it became a favored gift emporium for numerous New Jersey governors, and tastemakers like Frank Gehry, Martha Stewart and Michael Graves. The Silver Shop also welcomed among its high-profile guests Bruce Springsteen, who would purchase gifts for his mother; and Brooke Shields, who actually lived above the shop while a student at Princeton.

After 77 years and four devoted owners, The Silver Shop has now closed its hallowed doors in tree-lined Palmer Square, and its entire contents, including its custom-made mirrored showcases, are being sent to auction. Material Culture of Philadelphia has been chosen to handle the dispersal of goods and fixtures, which it will do over two weekends: Sept. 27-28 and October 11-12. Each of the auctions will be held at Material Culture’s spacious Philadelphia gallery, following a two-day preview period. There will also be a special preview and reception at Princeton’s Academy of the Sacred Heart, Sept. 22.

During the Art Deco era, when The Silver Shop was founded, nearly every upscale city in America had one store that was regarded as the most exclusive place to go for fine silver, exquisite jewelry and objets de vertu, explained Material Culture’s founder and owner George Jevremovic. “But over time, with the retail flight to suburban shopping malls, those sorts of establishments closed, one by one. The Silver Shop would have closed in 2000, had it not been for its fourth owner, Salvatore Pitts, who stepped in at the last minute to rescue it,” Jevremovic said. “Now the shop will become part of Princeton’s remarkable history, because Mr. Pitts has decided to retire and spend his time traveling.”

As one might imagine, a luxe array of antique silver will serve as the centerpiece of both the October and November auctions. Among the highlights are a sterling silver magnum chiller created by the Howard Silver Company of New York specifically to ring in the 20th century, as well as dozens of superb Tiffany designs, including a boxed sterling silver cocktail shaker with eight goblets. Other prized silver pieces include 10 Japanese tumblers of .950 silver, a set of eight J.E. Caldwell Art Deco cordials, a 19th-century sterling silver wedding basket, his and her toast racks made by the Birmingham Silver Company, egg servers, large tazzae compotes on gilded four-column pedestals, and designs by Sheibler and Cartier. Devotional objects of antique silver include Russian-style repousse silver icons rendered by Henryk Winograd, and a dated 1896 Russian silver cross by Anatoly Andropovic.

The inventory also features hand-wrought modernist and 20th-century silver, many by the foremost artists and designers for the last century. A “Circa 70” silver and ebony 4-piece tea and coffee service with a tray, by American artist Donald Colflesh (b. 1932-), dates to around 1958. Master metalsmith John Axel Prip (American, 1922-2009) is represented by an onion-form 3-piece tea set crafted for Reed and Barton. Georg Jensen designs include a pyramid-shape Art Deco teapot with the old “GJ” mark, by Danish draftsman Harald Nielsen (1892-1977); pieces from the collection of Jensen master silversmith Hans Christensen (1924-1983), and an ebony coffee and tea service by Italian silversmith Alphonse LaPaglia (1907-1953). Other notable lots include a 3-piece tea set by American designer Lurelle Guild (1898-1985), a full Buccellati flatware service in the Borgia pattern, and a pair of stunning Cartier hand-wrought vases with gold-washed interior. Other silver makers whose works will be auctioned include Allan Adler (1916-2002), Alfredo Sciarrotta (1907-1985), Karl Leinonen and Chicago silversmiths J. Myer Lebolt, Julius O. Randahl and the Kalo Shop.

Additional highlights include a life-size silver skull, a solid Italian silver wild boar mounted on a marble plinth, a Franz Hagenauer (Austrian, 1906-1986) bronze, paint and wood sculpture of a weightlifter, an Italian Fascist-period silver bowl, and an exceptional pair of 3-arm candelabra made of silver and ebony by Gorham.

Salvatore Pitts bought The Silver Shop after its previous owner, Arthur Colletti, passed away. Colletti also owned the renowned Pompey Collection of French porcelain and the Sable Collection of American porcelain. The majority of Colletti’s porcelain holdings were sold at Christie’s in May 2002 for world-record prices, but the portion he had retained for himself conveyed with the sale of the shop to Pitts and will be included in Material Culture’s auction inventory.

The selection of antique porcelain is led by a tall 19th-century Belleek tankard, a set of 12 painted Belleek cider mugs, a large group of Princeton transferware plates, and an original set of 19th-century Lenox Exhibition Plates from the original Lenox showroom. Other phases of Lenox porcelain are reflected by works from Willets, Willets Belleek, and Ceramic Art Company of Trenton, with many rare and one-off pieces by artists such as Nosek and Morley.

A trove of jewelry includes hundreds of pieces of hand-made antique, vintage and modern jewelry spectacular works by Alphonse Mucha, Gustav Munz, and Georg Jensen. Many of the Jensen designs are adorned with hard stones and were created in the Danish master’s lifetime.

The contents and showcases from The Silver Shop of Princeton, N.J. will be auctioned over the weekends of Sept. 27-28 and Oct. 11-12, 2014 at the Material Culture gallery, 4700 Wissahickon Ave., Philadelphia, PA 19144. Each auction session will commence at 11 a.m. Eastern Time. Preview on the Thursday and Friday immediately prior to auction weekend, from 11 a.m. to 5 p.m. All forms of bidding will be available, including absentee or live via the Internet through www.LiveAuctioneers.com.

A special auction preview and reception will be held in Princeton at the Academy of the Sacred Heart on Monday, Sept. 22, from 5-8 p.m., with refreshments served. All auction items will be on view and available for inspection before moving to Material Culture’s gallery.

For additional information on any item in the auction, to arrange for a phone line or to leave an absentee bid, call 215-438-4700 or email auctions@materialculture.com. Visit Material Culture’s website at www.materialculture.com. 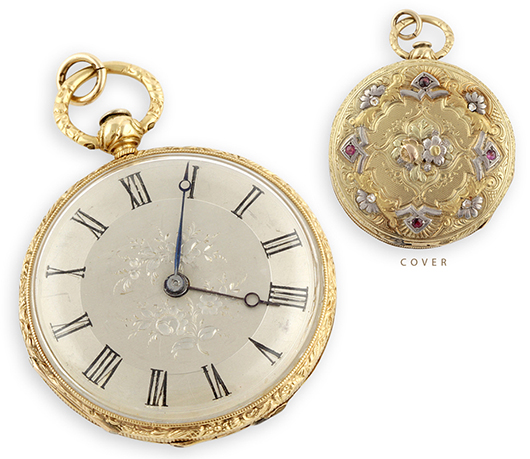 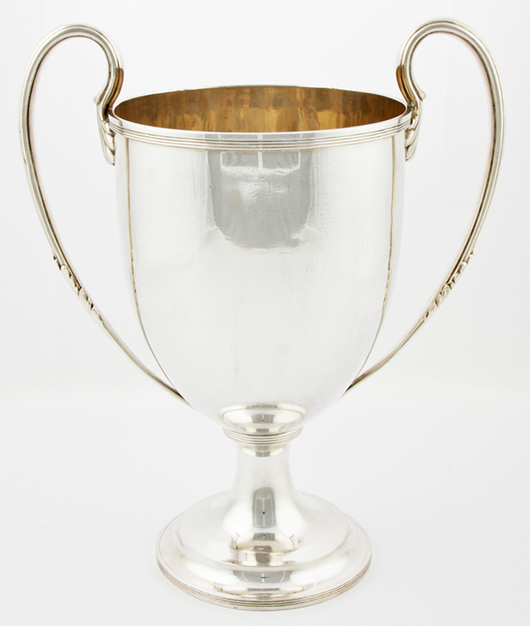 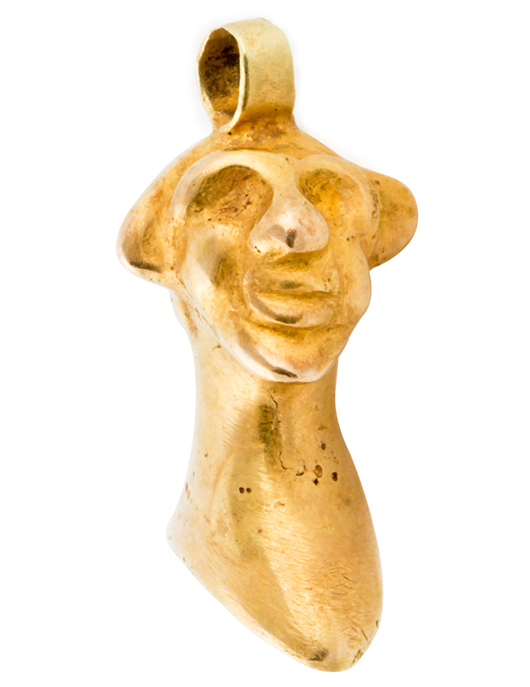 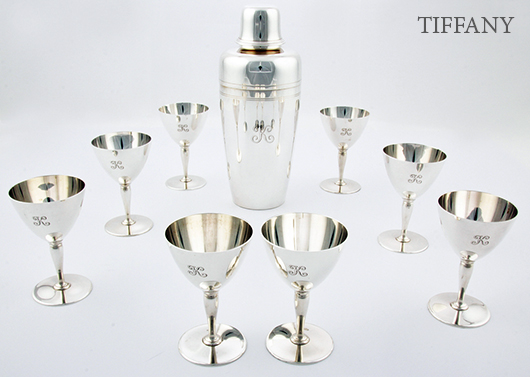 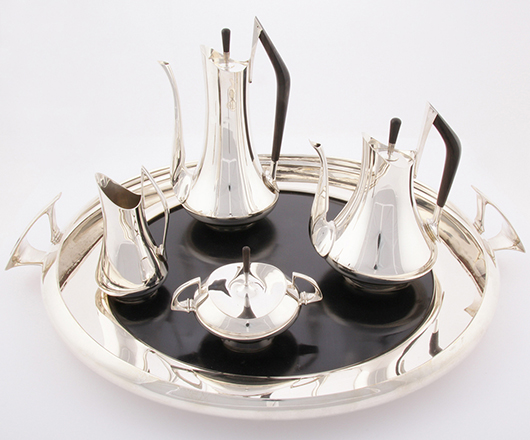 A ‘Circa 70’ silver and ebony four-piece tea and coffee service with tray, by American artist Donald Colflesh (b. 1932-), dates to circa 1958. Material Culture image 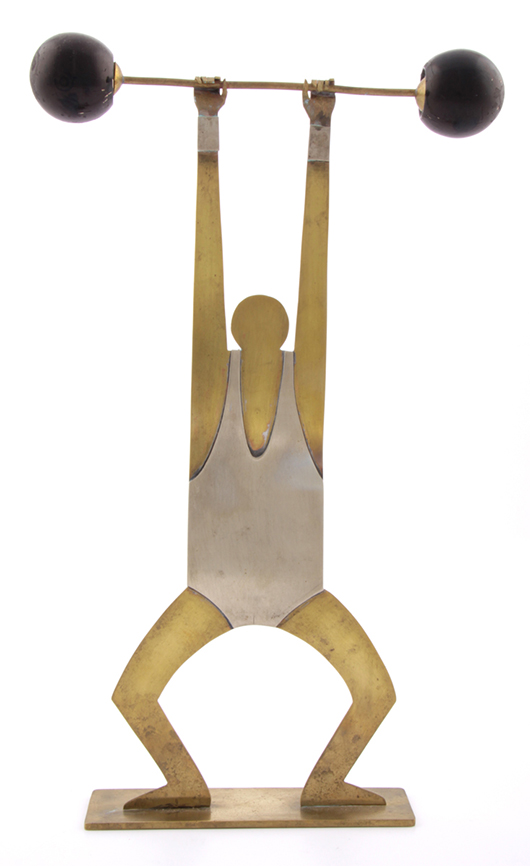 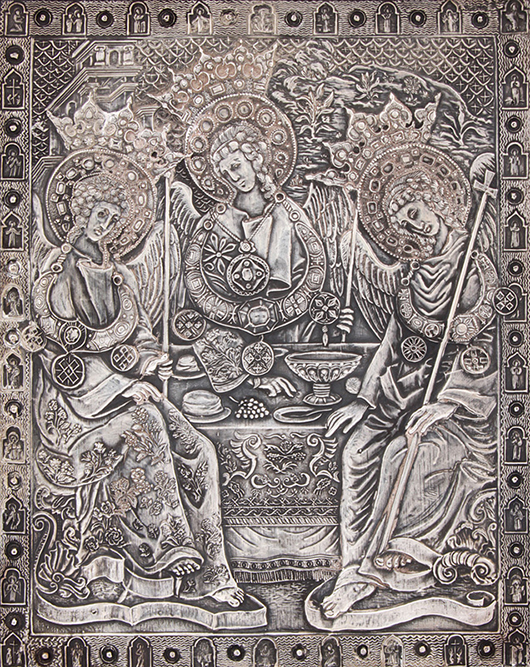 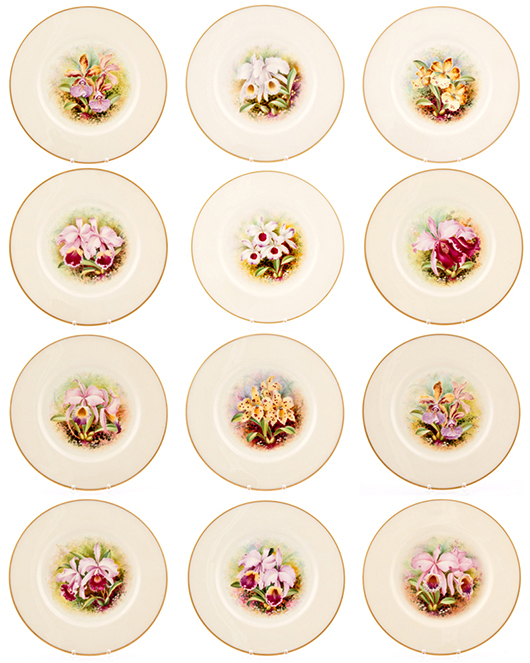 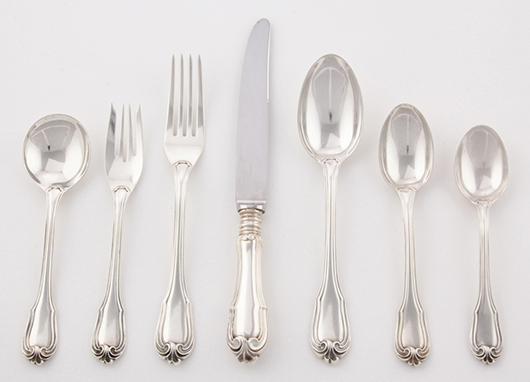 Archival postcards of The Shops on Palmer Square in Princeton, N.J., including The Silver Shop (second from right, with green shutters), which was the first establishment on the square, opening in 1937. Image provided by Material Culture