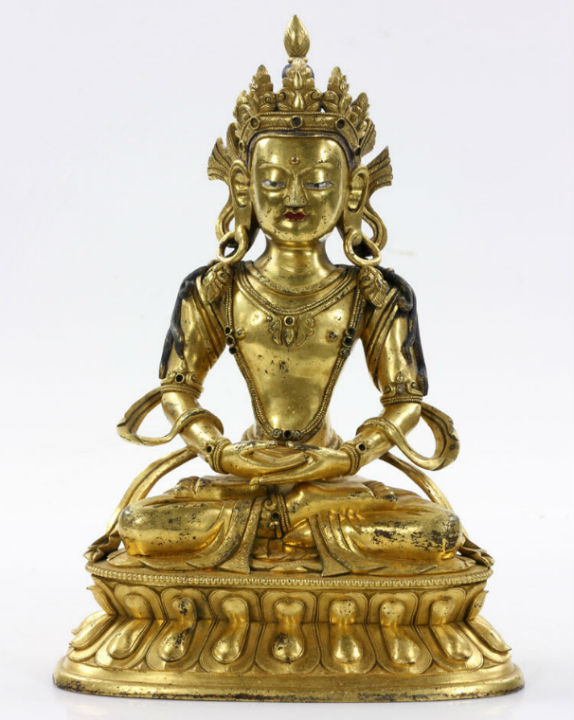 BEVERLY, Mass. – Kaminski Auctions will hold its summer Asian Antiques and Estate Auction on Sunday, June 11. The two-session sale commences with Asian art and antiques in session one starting at 10 a.m. Eastern time followed by the estate portion of the sale in session two. Absentee and Internet live bidding is available through LiveAuctioneers.

Kaminski Auctions’ Asian specialist has brought a selection of new-to-the-market pieces including an exciting selection of Sino-Tibetan bronzes from private collections all over New England. Four items in particular are highlighted in the sale. The first is a rare 15th- and 16th-century Tara figure of the Mid-Ming dynasty, seated in the Lalitasana position on a double lotus base (above). The right hand is in the Varada mudra and the left hand is raised in Vitarka mudra, with both hands holding the stem of a lotus blossom at the shoulders. From a Connecticut collection, this exquisite piece measures 6 1/4 inches in height and is estimated at $6,000-$8,000.

Two additional Sino-Tibetan bronzes from a New York private collection include Lama figures wearing exquisitely incised robes, sitting with legs crossed on lotus stands atop three-tiered pedestals with Sanskrit script writings. Both measure 7 1/2 inches in height and are valued at $6,000-$8,000 and $4,000-$6,000.

The fourth gilt bronze measures 10 1/2 inches high and is a Sino-Tibetan Buddha sitting with legs crossed on a lotus stand. From a Mountainside, New Jersey, collection, it is estimated to bring $6,000-$8,000.

From the same collection comes one of the top lots of the sale, a rare Qing Dynasty Chinese cloissoné censer set, consisting of the censer with stand, a box with stand and a vase with stand, all with Qing Dynasty marks on the bases. This rare set is estimated to bring $8,000-$12,000.

An additional bronze piece of interest is a Japanese Meiji period bronze covered urn valued at $5,000-$8,000.

A Chinese Song/Yuan dynasty celadon charger on its original wood stand and a Chinese jun glazed water pot, with original hardwood stand round out the porcelain highlights of this sale.

In the estate portion of the auction is a Pablo Picasso ceramic pitcher titled Chouette Femme (Woman Owl). Glazed, painted, signed and embossed “Madoura,” it is from a Picasso edition circa 1951. It was originally purchased from Gordon’s Print Price Annual in Naples, Florida, in 1993. It is referenced in the Catalogue of the Edited Ceramic Works 1947-1971 by Alain Ramie, no. 119, and is valued at $10,000-$15,000. 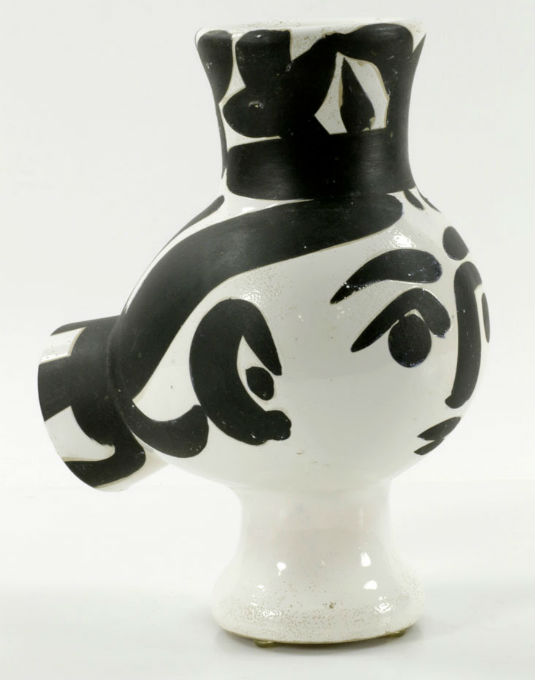 There is also a Henry Spencer Moore (English, 1898-1986) lithograph of sisters with child signed lower left, edition 43 of 50 originally purchased at Eckert Fine Art, Naples, Florida, in 2001. It comes with the original receipt of purchase.

View the fully illustraed calendar and bid on LiveAuctioneers.