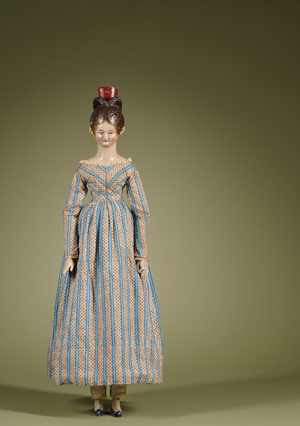 Important portrait-type carved-wood doll, Germany, circa 1820, 39 inches. Richard Wright is believed to have acquired the doll via private treaty sale through Sotheby’s London in the 1980s. Undocumented anecdotal history purports that the doll was commissioned by a member of the Dutch Royal Family. Estimate $40,000-$60,000. Image courtesy Skinner Inc.

MARLBOROUGH, Mass. (ACNI) – Those who knew the late Richard Wright remember him as a free-spirited visionary who helped shape the international doll-collecting community as we know it today. His charismatic personality and unerring eye for quality made him a popular fixture at doll shows, conventions and other gatherings. But as famous as he was – including to mainstream America from his appraisal appearances on PBS Television’s Antiques Roadshow – Wright was still a collector at heart. And while relatively few had the privilege of visiting the lifelong collection of antique dolls displayed at his charming stone-and-beam country home in Chester Springs, Pa., there will soon be an opportunity for everyone to see and bid on the dolls that captured the eye, heart and soul of Richard Wright.

On Oct. 10, 2009, Skinner Inc. will auction Wright’s entire personal collection of dolls, teddy bears and miniatures, with Internet live bidding through LiveAuctioneers.com. A dream team has been working diligently over the summer to produce the event that will add the final chapter to Richard Wright’s legacy [Wright died on March 1, 2009]. The sale’s three main architects are Skinner Vice President Stuart Whitehurst and consulting specialists Becky and Andy Ourant. Both Stuart and Andy were Richard’s fellow Antiques Roadshow appraisers; the Ourants were Richard’s closest friends, and the natural choice to supervise the sale of his collections.

Andy Ourant described Wright’s doll, toy and teddy collection as “very personal – a reflection of his own life and the profession he chose. Richard’s parents were antique dealers. He started collecting dolls as a boy, and his collection includes dolls he inherited from his mother’s collection as well as those he purchased for himself.’

“Richard liked esoteric things, but he was also a sentimental guy. If he bought a collection from someone he had known for a long time, he would keep something unusual from the collection as a remembrance,” Andy said. “He liked for everything to be original, in great condition and with great clothes. He sold probably more than anyone else in the doll world and was in a unique position to cream off what he thought were the very best pieces.”

Yet in spite of the emphasis Richard placed on quality, Andy says it wasn’t all about the high end. “Richard owned great examples from all different levels of buying. He was not a snob about collecting. He was a man for all dolls, whether they were worth hundreds or thousands, but no matter what level of doll, he would buy the very best example.”

Becky Ourant said that, in her opinion, a top highlight of the collection is the assortment of rare 18th-century wooden dolls, led by a large English Queen Anne doll in all-original clothing that took pride of place in an arch-top showcase in Richard’s home. The doll has a round, turned-wood head and body that were created as one piece, with gesso applied over the wood. It features a carved-in triangular nose, applied glass eyes with an “intense gaze,” and rosy cheeks on pale skin. “It is quite an important doll because it represents the foundation of modern doll production,” Becky said. “It would have been an extravagant gift for a child to receive in the 18th century, and it was definitely a special doll to Richard. He even featured it in the logo on his shopping bags.”

Displayed below the Queen Anne doll in Richard’s home was another 18th-century wooden that was written about extensively by doll historian John Noble. The child who originally owned the doll apparently died at a young age, based on the family history that is written on the doll’s dress in ink. Becky surmises that the rare “memorial doll” might have been of Continental manufacture.

Two German dolls were singled out for special attention within the 18th-century woodens. “We cannot confirm it, but reportedly one of them was made for the Dutch Royal Family,” said Andy. “It’s 34 inches tall with a jointed body and features fantastic carving, with a removable carved-wood hair comb. It’s painted very differently than ‘play dolls’ of that period – it’s more of a portrait doll.” The second highlight in this category is a large, carved-wood German doll with pierced ears and a period wardrobe. “This is an unusual doll,” Andy said. “Even the bodice is carved into the wood, and it has distinctive human features. From this improved carving, you can see the development that was taking place at that time in doll making. That’s something that visitors who knew dolls would notice immediately in viewing Richard’s collection. Its contents document how doll production evolved over the centuries.” A large number of desirable Grodner Tals, including dollhouse-size dolls, rounds out the wooden section and takes the group into the 19th century.

The period from the 1820s through 1850s is well documented in Richard’s collection by German papier-mâché dolls. “Again, you can see the changes in hairdos and the production methods that were in use at the time,” Andy said. “They have interesting hairdos – coronet braids, Apollo knots, large buns and fancy Queen Victoria styles. Some have painted eyes, while others, which are quite rare, are glass-eyed.” Among the highlights in the group are many gentlemen dolls with molded hats of various styles. “They’re the types of dolls that you just never see in all-original condition,” Andy observed.

The charm factor goes off the charts with Richard’s American Kris Kringle child doll, which has a German papier-mâché head on a homemade cloth body. The doll’s colorful costume is covered with more than 50 sewn-on miniature Christmas toys and novelties similar to what one would find in Victorian Christmas crackers – whistles, a carved bird, trains, boats, a clock, an American Flag and many other small-scale playthings. It comes with extraordinary provenance – a handwritten letter to the doll’s original owner from her aunt, sending Christmas cheer and love, and signed with the date 1852. “Richard obtained this doll from a New England collection,” said Andy. “He sold it, and many years later, he re-bought it. During the time it was out of his hands, it even passed through the famous Tom Anderson collection.”

Another significant class of dolls in the Wright collection is the German chinas made during the period of 1840-1870. Among the manufacturers represented are Meissen, Schlaggenwald, Kestner and Kister. Others were made by KPM. “Of the KPMs, there are both gentlemen and ladies,” said Andy. “Some have a double KPM mark, which means KPM did the whole production. Others have a single KPM mark. This means that after the firing, KPM would send the doll to an outside decorator, who would add their own mark. All of them are highly sought-after dolls.”

With a few notable exceptions, including a Bru fashion doll and a portrait Jumeau, most of Richard’s finest 20th-century bisque dolls were characters – a few ladies but mostly children. “This was a market that he fostered throughout his life,” said Becky. “He had a Kammer & Reinhart 107 [a k a “Carl”] and wonderful examples of a 109, 114, 112 and 101. He also had superior Heubachs, Kestners – including a 208 – Simon & Halbig 151s, and a flirty-eyed 1388 whose image he used on his Antiques Roadshow business card.”

As the demand for early American cloth dolls continues to escalate, conversely fewer truly fine examples are appearing at auction. For this reason, Becky believes there will be tremendous interest in the three Izannah Walkers in Richard’s collection. “These are great representations of American folk art and 19th-century painting,” she said. “In his collection, Richard had the iconic Izannah Walker doll with sausage curls by the ears, a second doll with a curl painted across the nape of the neck, and a third one with smaller, more distinctive eyes and more-realistic features.” There are two groups of Martha Chase cloth dolls: a magnificent 4-piece Alice in Wonderland set featuring Alice, the Frog Footman, the Duchess and the Mad Hatter, which will be sold as one group; and a 1920s set of characters from Dickens’ The Pickwick Papers, which will be offered individually.

For those who would revel in decorating a house from scratch, Andy recommends Richard’s 18th-century Georgian baby house. A beautiful three-story, 9-room residence, it features three opening doors and original appointments, including fireplaces. “What’s especially nice about this house is its proportions. Sometimes baby houses are giant. This one is a nice size. It accommodates dolls that are of inch-to-foot scale.” The auction inventory also includes an outstanding group of dollhouse gentlemen dolls and an ample array of miniatures by manufacturers such as Walterhausen and Schneegas. The Wright collection also includes many bisque figurines.

A small but select group of teddies is highlighted by a golden Steiff Petsy with tipped mohair fur and blue glass eyes. “Richard was one of the founding fathers of the bear market in the 1980s,” said Becky. “He even made the Associated Press news wire when he paid a world-record price for a Steiff bear in England. In the course of his career he had every bear you could imagine. He loved them and sold them, but he wasn’t an avid collector. The auction contains about 6 or 7 bears. Collectors would be proud to own any one of them.”

Several European pull toys are entered in the sale, as is a highly unusual miniature American tin runner sled of approximately 8 to 9 inches in length. Its hand-painted motif includes an American Flag and the Capitol Rotunda, emblazoned with the slogan “Our Country.”

In order to showcase the Wright dolls and toys in a manner that befits such an important collection, Skinner Inc. will be hosting a 7 p.m. gallery walk and wine and cheese party immediately following the preview on Friday, Oct. 9, 2009. Three specialists – Becky and Andy Ourant, and Nancy Smith – will lead the gallery walk.

“This will be a very informal evening and will be open to anyone who wishes to attend. We want the doll community to feel welcome and to enjoy our wonderful new gallery,” said Skinner Vice President Stuart Whitehurst, who is not only coordinating the sale of Richard Wright’s collections but also will be sharing the auctioneering duties with Andy Ourant.

“Skinner’s auctions have a structured format, but the gallery walk will allow everyone to become more intimate with Richard’s collection,” Whitehurst said. “Becky and Andy have such a broad knowledge and know so much about Richard’s collection that we felt their knowledge should be shared in some sort of open forum. We decided we should host an event that had the same interactive atmosphere as, perhaps, a town hall meeting. During the gallery walk, everyone will be able to walk around with Andy, Becky and Nancy, view the collection up close, and take part in an open dialogue about the dolls. We think it’s going to be a lot of fun.”

In summarizing the importance of the Richard Wright collections [Skinner will also auction Wright’s world-class collection of decorative art and furniture on Oct. 24, 2009 in Boston, with Internet live bidding through LiveAuctioneers.com], Whitehurst stated: “Of course we were absolutely thrilled to learn that Richard’s dolls and other collections would be coming to Skinner. The phrase ‘once in a lifetime opportunity’ gets overused, but when you have a collection like this one, which took a whole lifetime to produce, its sale can only be described as ‘once in a lifetime.'”

For questions regarding any item in the sale, tel. 508-970-3130 or e-mail wrightcollection@skinnerinc.com. View the fully illustrated catalog and sign up to bid absentee or live via the Internet at www.LiveAuctioneers.com. 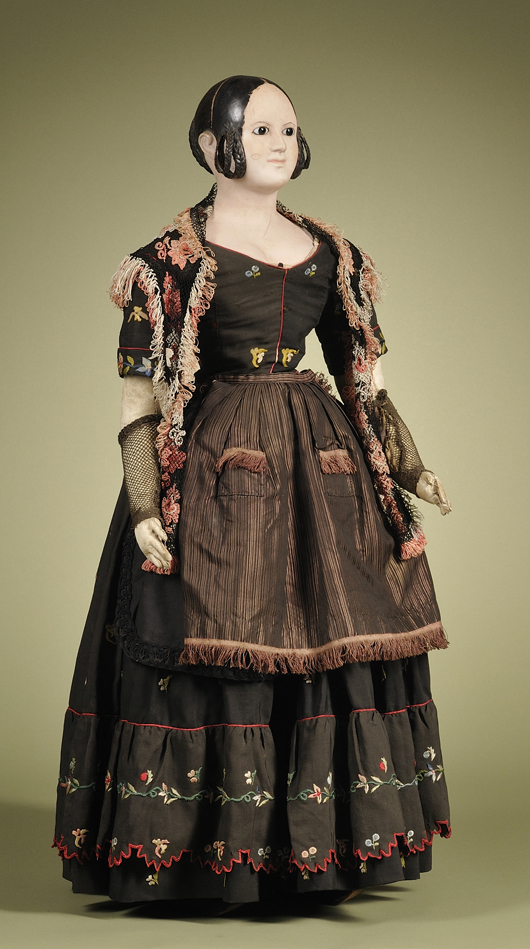 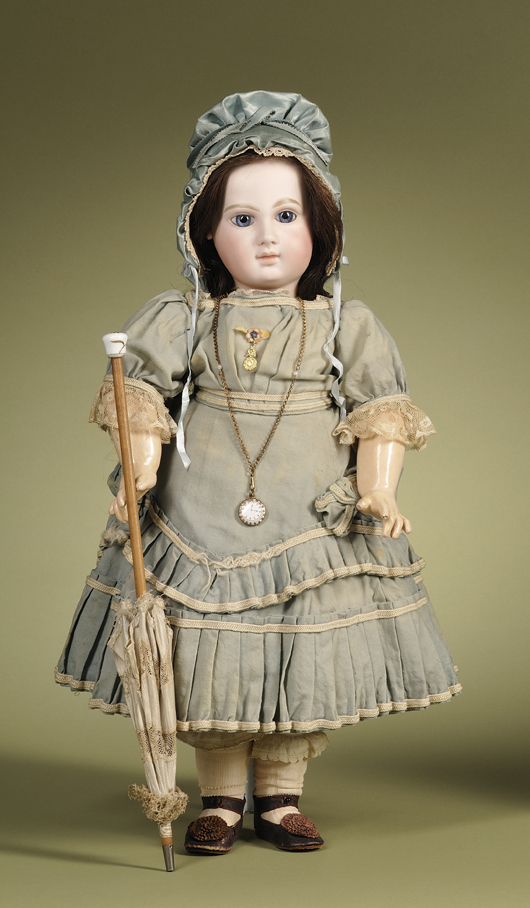 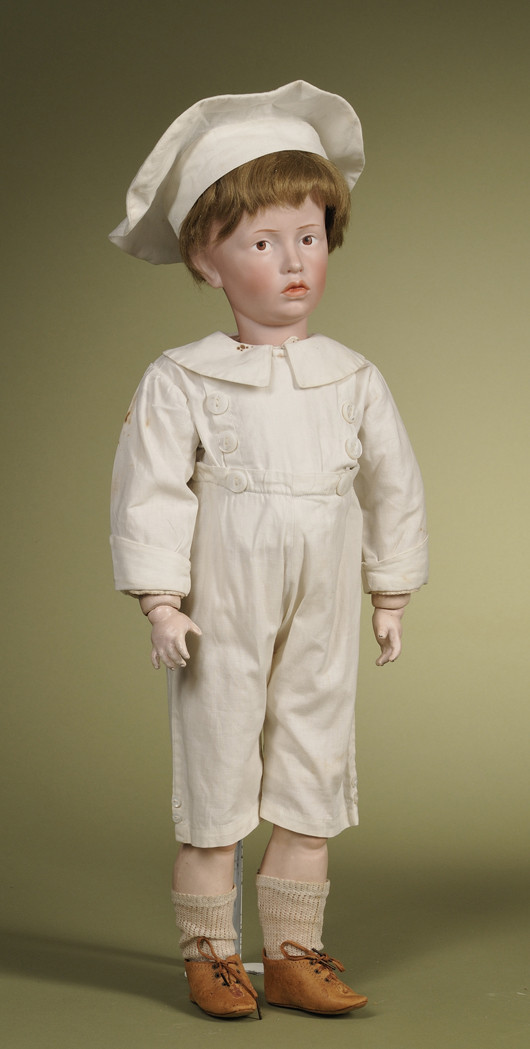 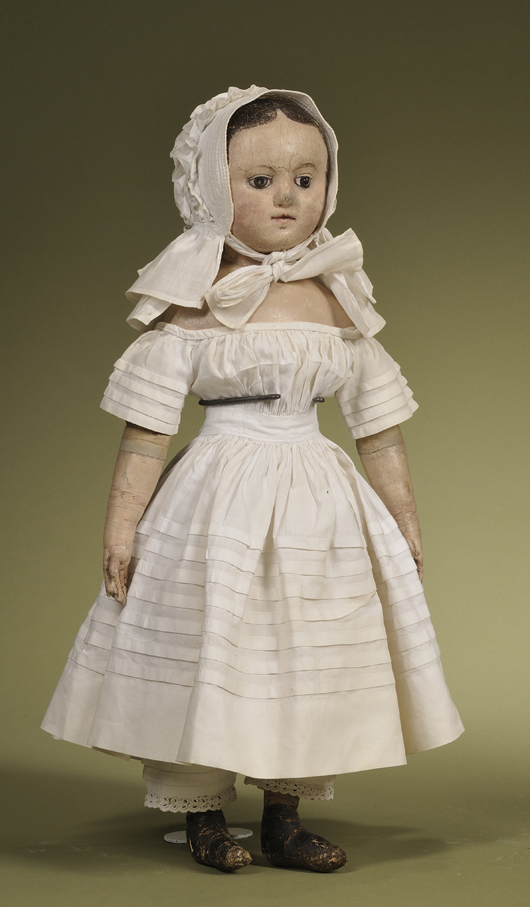 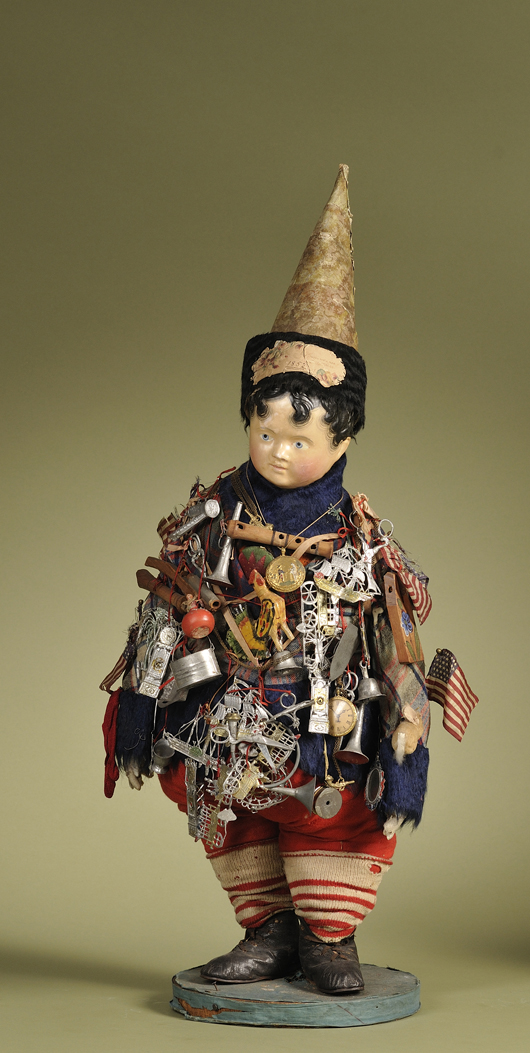 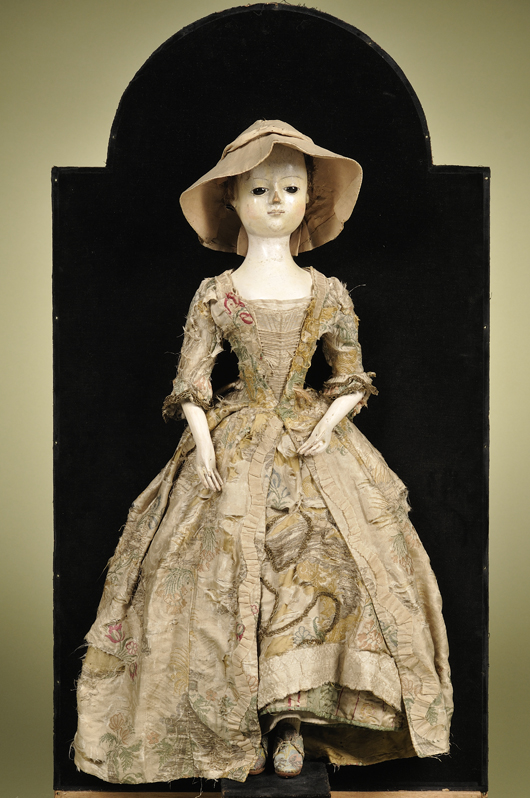