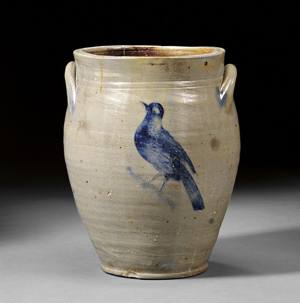 BOSTON –Skinner Inc. will host an auction of American furniture and decorative arts at their Marlborough gallery on Sunday, Aug. 14. This sale of over 900 lots is highlighted by items from the collection of Barbara and Robert Levine. The Levines’ affection for Vermont’s rich history of folk art, needlework, clocks and furniture is reflected in the material in this collection. Of particular interest is a rare and important early 19th-century Federal tiger and bird’s-eye maple veneered bureau, lot 26, made in Rutland, Vt., and estimated between $50,000 and $70,000. A cherry bombe chest of drawers attributed to George Stedman and a rare cherry shop wall regulator by Levi Pitkin of Montpelier, Vt., also highlight the collection.

Exceptional examples of folk painting include an unsigned American School work, lot 75, Portrait of Lavinia Fanning Age Seven Years. This portrait of the daughter of Nathaniel Fanning, a midshipman on John Paul Jones’s ship Bon Homme Richard, was painted in 1803 and is estimated between $8,000 and $12,000. It comes to Skinner through family descent and reportedly hung in the family home for over 200 years. A pair of portraits by John Brewster, lot 69, depicts Capt. John Low and his wife, Sara (Herrick) Low, and is estimated between $30,000 and $50,000. Another appealing portrait is Jonathan Orne Johnson “J.O.J.” Frost’s folk painting The “A(Zor). ORNE HOME,” Marblehead, Massachuesetts. Frost was an untrained artist who took up sculpting and painting later in life. The painting depicts several African-American servants with yard tools and a white gentleman holding a basket by a house. Interestingly, this house was used in the 1830s in the Underground Railroad as a secret meeting place for the New England Anti-Slavery Society. Estimates for lot 169 range from $15,000-$25,000.

Weather vanes, whirligigs and folk art sculpture going on the block include a whirligig tavern sign from Connecticut, circa 1870s, lot 82, estimated at $8,000-$12,000. The carved painted wood figure of a woman with paddle hands reportedly stood at the Halfway House, a tavern and inn established in 1876 halfway between the towns of Darien and Stamford, Conn. A diverse variety of weather vanes including codfish, horses, roosters, cows, a peacock, and a leaping stag will be offered. A copper Dexter running horse weathervane, lot 87, from the late 19th century had been mounted on a barn in Worcester County, Mass., since its original purchase and is expected to bring between $3,000 and $5,000. Finally, a J. Howard rooster weather vane, lot 692, made of gilt zinc and copper, and made in West Bridgewater, Mass., circa 1854-67, has been estimated to sell between $10,000 and $15,000.

Marine paintings include Solon Francis Monticello Badger’s Portrait of the Schooner Young Brothers. The Young Brothers was built in Belfast, Maine, in 1890. Her captain and share owner was George Snow of South Falmouth, Mass. The painting, lot 622, is expected to sell for $10,000-$15,000. Rounding out the marine offerings is an unsigned work, lot 601, Portrait of the Bark Silver Cloud. Capt. Thos. W. Lewis, Master, with an estimated value of $6,000-$8,000. A portrait of the captain himself attributed to William Matthew Prior will also be offered as lot 600. According to information collected at the Mystic Marine Museum and Bath Maritime Museum by a descendant of the consignor, the bark Silver Cloud was built in 1853 by Gen. Joseph Barry at George Town, in Bath, Maine. A painting by Ralph Eugene Cahoon Jr. of Cotuit, Mass., lot 634, entitled Nantucket Fish Co. will also be sold at an estimated auction value of $20,000-$30,000.

Textiles and needlework include several lots of samplers stitched by New England girls in the 19th century. Lot 215 by “Hannah W. Perkins Age 11,” from Jaffrey, N.H., is an example of the needlepoint featured in “Pictorial Samplers of Southern New Hampshire” in Girlhood Embroidery: American Samplers, Pictorial Needlework 1650-1850, by Betty Ring, Alfred A. Knopf Inc. Ring writes, “Between 1817-1821, girls of Fitzwilliam and Rindge placed paper-faced ladies in elegant pastures surrounded by luxuriant floral borders … Their samplers have an interesting variety of materials and their paper-faced people and consistently worked flowers unquestionably relate them to a later example naming Jaffrey.” Hannah Perkin’s sampler is expected to bring between $8,000 and $12,000.

The sale will also feature an important collection of American Rockingham-glazed stoneware, including an early example by William Capron. The stoneware jar decorated with a cobalt flower and bird design is dated to Albany, N.Y., circa 1800-05. William Capron is thought to have been the first producer of stoneware in Albany. He opened a pottery shop there on Washington Street in 1800. The jar, lot 188, has an estimated value of $2,000-$3,000.

Miniature objects, toys and household items from the collection of Joanne Forney will also be auctioned. Mostly 19th century, this collection is highlighted by a Nantucket oval box, painted blue and decorated with a whale carved from ebony. Lot 353 has an estimated value of $1,000-$1,500.

A selection of American clocks to be featured include patent timepieces attributed to Aaron Willard Jr., John Sawin and other makers, one of which has a full-striking movement. Lot 431, a mahogany striking patent timepiece from Boston, circa 1830, with mustard yellow and red eglomise tablets, is expected to sell for $1,500-$2,500. Tall clocks are highlighted by a Federal inlaid mahogany tall-case clock, lot 516, by Joshua Wilder, Hingham, Massachusetts, circa 1807-10, has a rocking ship dial. Auction estimates range from $6,000 to $8,000. Another Federal mahogany inlaid tall-case clock by James Cary, Jr. of Brunswick, Maine, circa 1810-15, comes from the collection of Israel Sack of New York. This clock, lot 517, is illustrated and described in American Antiques from Israel Sack Collection by Highland House Publishers and has an estimated value of $6,000-$8,000.

Skinner Inc. will present an Americana lecture by Philip Zea, president of Historic Deerfield, on Saturday, Aug. 13, with a reception at 2:30 p.m. and lecture at 3 p.m. in their Marlborough gallery at 274 Cedar Street. RSVP to 508-970-3000 or at events@skinnerinc.com. 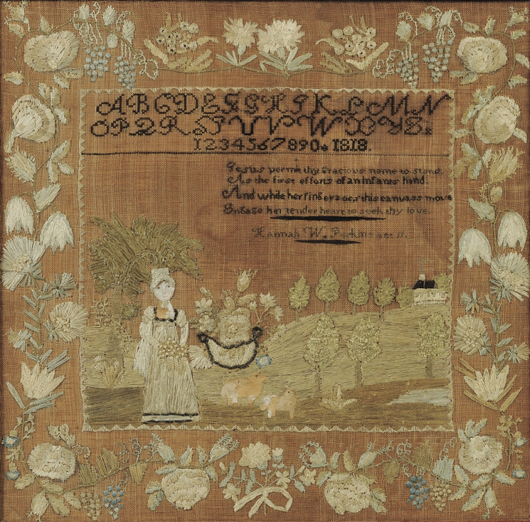 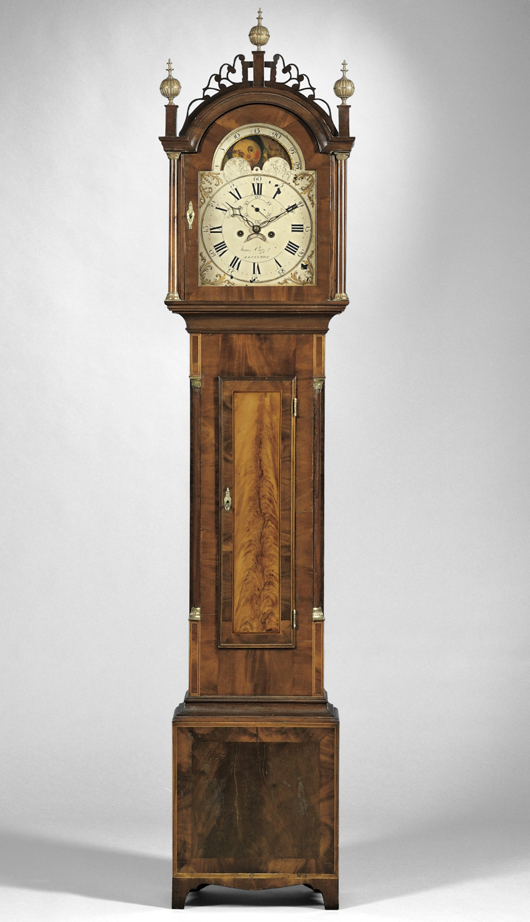 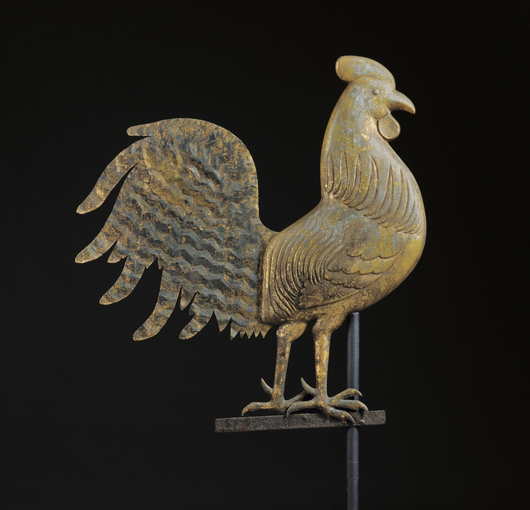