BOSTON –Skinner’s semi-annual auction of American Furniture and Decorative Arts on March 7 will feature perhaps the most extensive collection of mocha utilitarian pottery ever offered at the auction house in a single sale.

The sale kicks off at 11 a.m. Eastern in the Boston gallery located at 63 Park Plaza and is comprised of 667 lots of material. LiveAuctioneers will provide Internet live bidding.

Also offered in the upcoming Americana auction are several lots of interesting tall clocks, highlighted by a Simon Willard in a classic Roxbury case. This particular clock is especially unusual due to its small size. It is estimated at $30,000-$50,000. The sale also boasts a nice group of Connecticut production clocks from the early 19th century, coming to Skinner from a discerning collector.

A hallmark of Skinner’s Americana auctions has always been prolific folk portraiture, and distinguished in this sale is Portrait of a Girl and Her Dog in a Grape Arbor by Susan Catherine Moore Waters. The painting has remained in a New Hampshire collection since it was purchased at Skinner 30 years ago. It is estimated at $8,000-$12,000. Another portrait of interest is a John Samuel Blunt work, Portrait of a Lady Wearing a Green Dress with Jewelry. While the face is very carefully rendered, the remainder of the picture was done far more quickly, but effectively. The painting, which is estimate at $15,000-$25,000 was bought by the consignor’s grandmother in 1930 and has remained in the family since.

The sale also features some particularly fine landscapes, including Overlooking the Harbor, Cohasset, Massachusetts by Frank Henry Shapleigh, most regarded for his New Hampshire scenes. The piece is estimated at $4,000-$6,000. Marine art is highlighted by William Bradford’s Portrait of the Whaleship Young Hector off Clark’s Point, New Bedford. Created early in Bradford’s career, the painting is very luminous in nature and reminiscent of Fitz Henry Lane style, from whom he was influenced. It is estimated at $60,000-$80,000. Other marine offerings include James Edward Buttersworth’s Yacht Race estimated at $15,000-$20,000 as well as a scrimshaw and whale tooth carvings.

Finally, the sale is highlighted by a pair of fire buckets from Salem, Mass. While many fire buckets have survived, few pairs have remained intact. Painting on one bucket in particular is in very good condition. The pair is estimated at $4,000-$6,000. 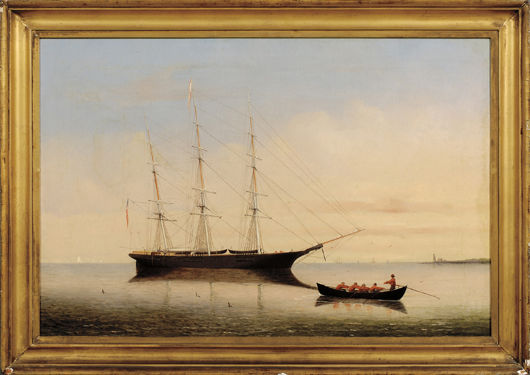 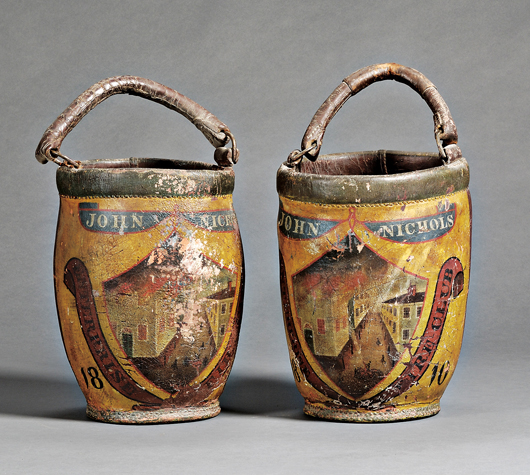 It is unusual to find a matched pair of polychrome painted leather fire buckets. This set from Salem, Mass., has a $4,000-$6,000 estimate. Image courtesy Skinner Inc.