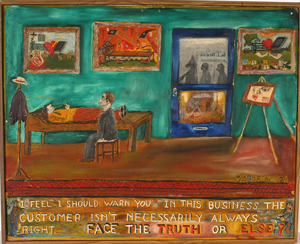 Heavy oil built up on canvas by Dr. Samuel A. Greenberg, M.D., titled ‘Face the Truth or Else.’ Image courtesy of Slotin Auction.

BUFORD, Ga. – A weekend sale featuring over 1,000 lots of folk art in a wide array of genres will be held April 30-May 1 by Slotin Auction at the Historic Buford Hall, located just north of Atlanta.

Internet bidding will be facilitated by LiveAuctioneers.

Featured will be many pieces from the lifetime collection of Salvatore Scalora, director of the Atrium Gallery and the William Benton Museum at the University of Connecticut.

“We’re calling this our Spring Masterpiece Sale, with the theme being Changing Faces of American Folk Art,” said Steve Slotin of Slotin Auction. “Folk art, while deeply rooted in history and the American experience, is evolving, like any other art form, and this sale will reflect emerging trends. We’re really mixing things up. This will be one great sale.”

Salvatore Scalora was born in Italy into a large family of peasant farmers who emigrated to the United States. Salvatore was the only one of eight children to attend high school, then he went on to earn a master of fine arts degree from the Art Institute of Chicago. While there, he and a friend, Clay Morrison, developed a deep love and appreciation for the world of folk art. Clay died a few years ago and, at his request, his collection was sold through Slotin Auction as a benefit for the School of Art in Chicago.

As is the case with many early self-taught art enthusiasts, Scalora not only collected folk art, he made frequent trips to his folk artist heroes, at first with Clay Morrison and later his wife. Trekking into often rural and forbidding terrain, he broke bread and befriended giants in the field such as Edgar Tolson, S.L. Jones, Lanier Meaders, William Dawson, Minnie Black, Noah Kinney, Carl McKenzie, Denzil Goodpaster and others. The earliest of collectors often covet these quirky meetings with the artists as much as the art treasures they bring home.

“I was consumed with these amazing artists as I ventured out to experience their folk art environments,” Scalora said. “As we visited our old folk artist friends, and sought out new ones, it became evident that there was so much wisdom in the folk artists’ lives and in their art. They led mostly ordinary, productive lives, but were drawn into this new creative life later on.”

Some expected top lots of the auction follow, with accompanying high and low estimates.

S.L. Jones, another folk art superstar, will be represented in the sale, with works such as Dark Head Bust With Blue Eyes, a stained and painted wood carving, signed by the artist (est. $5,000-$8,000). Also, paintings by a new discovery – author and psychiatrist D. Samuel A. Greenberg – will include a 1960 oil on canvas titled Average Normal Born (est. $1,500-$2,000). Greenberg authored two autobiographical novels in the early 1960s and developed his own discipline of therapy he coined theopsychosophy. He created a series of original paintings to illustrate and explain his theory and used them as teaching tools in practice and when he lectured. This is the first time his original works will be offered to the buying public.

A pair of 19th-century American School portraits are certain to generate bidder interest. An unsigned 40 inch by 50 inch rendering of Margaret and John Loper of Philadelphia, still in the original frame, should realize $5,000-$10,000, while an oval oil on canvas portrait of a woman from the mid-1800s, 24 inches by 30 inches, also unsigned, should make $3,000-$5,000.

Beautifully carved eagles are a unique slice of Americana, and this sale boasts several. These include an anonymous carved and varnished wood figure, highly stylized with incredible details, from the mid-1800s, 45 inches tall (est. $3,000-$5,000); and a late 1800s American eagle with outstretched wings, carved wood with gesso, 37 inches tall, unsigned (est. $1,500-$2,000).

Haitian art from the 1950s, rare and in high demand, will be sprinkled throughout the sale. Pieces will include Adam Leontus’ circa 1950s signed oil on board titled Mother Bird (est. $2,000-$4,000). Examples of tramp art from the Clifford Wallach collection, many of which are illustrated in his book, Another Notch, will feature an anonymously made large mirror frame with hearts, made from chip carved wood, 51 inches tall, 34 1/2 inches wide (est. $2,500-$3,500).

Slotin Auction’s next big event after this one will be Folk Fest, an 18th annual summer extravaganza, featuring 100 galleries and dealers from across the nation, slated for Aug. 19-21. This event will at the North Atlanta Trade Center in Norcross, north of Atlanta off I-85. 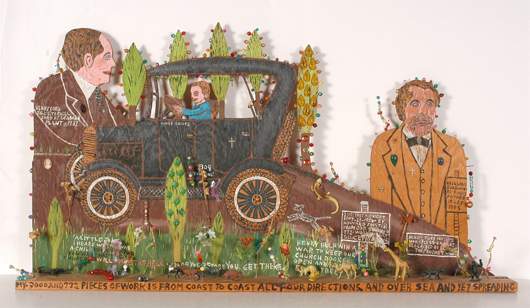 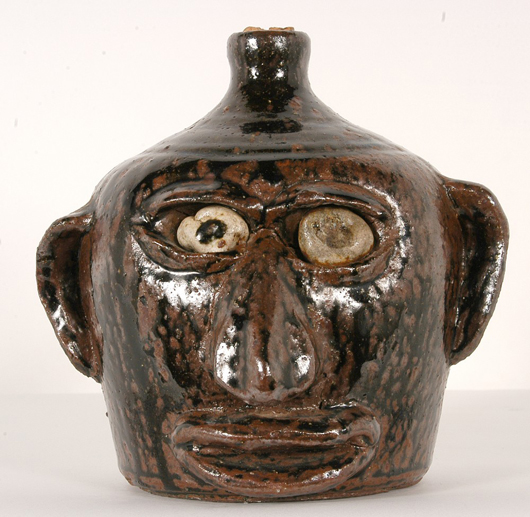 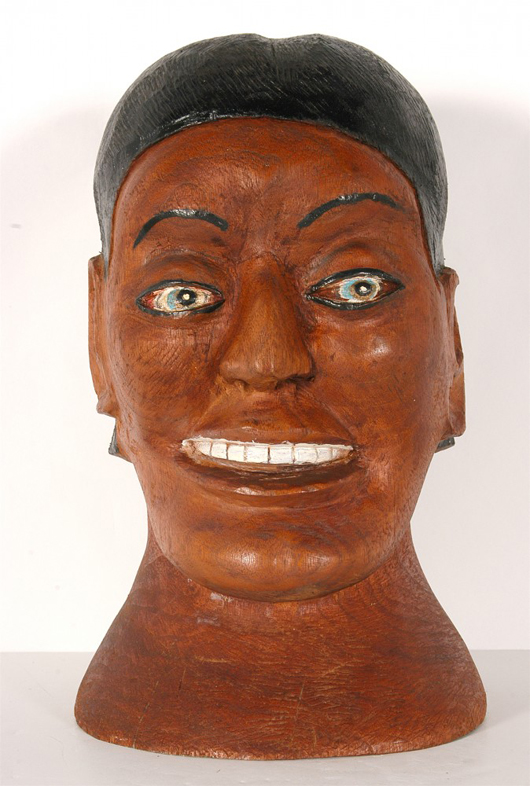 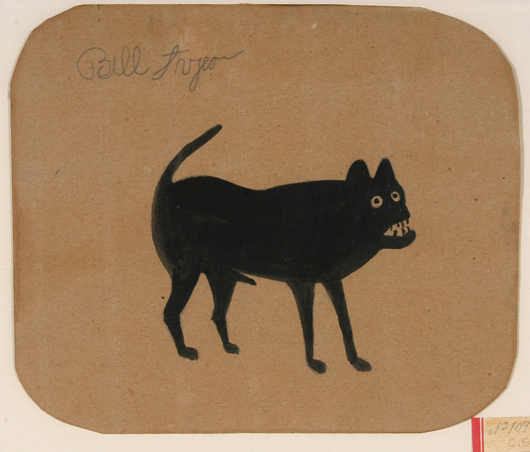 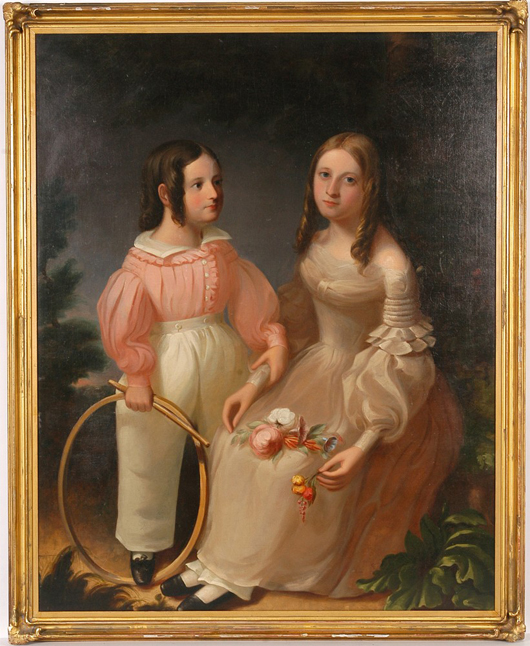 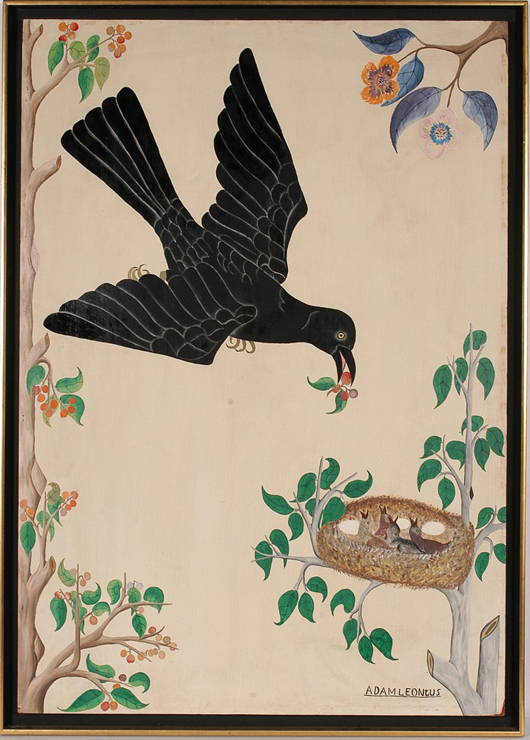