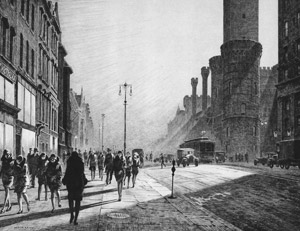 SHERMAN OAKS, Calif. – Clark’s Fine Art & Auctioneers’ next art auction, on Feb. 8, 2009, features an outstanding etching by Australian-born American printmaker Martin Lewis (1881-1962). Titled Quarter of Nine, Saturday’s Children, it is a strong impression, signed in pencil and on the plate, and measures 9¾ inches by 12½ inches.

Martin Lewis (1881-1962) left home at the age of 15, subsequently studying art under Julian Ashton at the art society’s school in Sydney. In 1900 he left Australia for the United States, settling in New York. There he found work in commercial illustration; his first job was painting stage decorations for William McKinley’s Presidential campaign of 1900.

Lewis’ earliest known etching is dated 1915, however the level of skill exhibited in the work suggests he had been working in the medium for some time previously.

In 1920 he decided to travel to Japan, where for eight months he learned oil and watercolor painting. In 1925, he returned to etching and produced most of his best-known works in the 10-year period to follow. Particularly noteworthy were his series on Japan and New York.

Martin Lewis’ first solo exhibition in 1929 was successful enough for him to give up commercial work and concentrate entirely on printmaking. With the onset of the Depression, however, he was forced to leave the city for four years between 1932 and 1936. When he was finally able to return to New York in 1936, the market had changed, and interest in his work had cooled. Martin Lewis died largely forgotten until many years later when his artworks were rediscovered by a new generation.

In addition to the Martin Lewis etching, Clark’s will auction paintings by Marcel Clement and Barbizon school artists, an original Gigante watercolor, and prints by Sam Francis, Ellsworth Kelly, Willem De Kooning and others. The sale inventory also includes a large collection of vintage and contemporary photography, Modern ceramics and other desirable art objects. Many items have no reserves.

For additional information, call 818-783-3052 or email gallery@pacbell.net. Live Internet bidding will be available through LiveAuctioneers.com. Click here to view the electronic catalog.