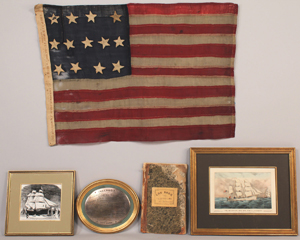 Included in the LaGrone flag collection is the boat flag and archive from ‘The Red, White and Blue,’ which made headlines in 1866 when it became the smallest ship to ever cross the Atlantic. Est. $10,000-$15,000. Image courtesy Case Antiques Auction.

KNOXVILLE, Tenn.— Forget red, orange and brown. The colors of fall are red, white and blue at the Oct.1 Case Antiques Auction, as an important patriotic Americana and flag collection headlines the sale. The 700-lot auction also includes American and European fine art and decorative arts, Asian antiques, and Southern regional material. It will take place at the company’s gallery in Knoxville, Tennessee, with Internet live bidding through LiveAuctioneers.com.

The Americana collection, which comprises a significant portion of the sale, comes from the estate of A. Welling LaGrone Jr. of Nashville. LaGrone was a businessman, arts patron and veteran who expressed his love of state and country through historic memorabilia, documents, decorative arts, military items, folk art and fine art, and in particular, flags. His vexillogical collection includes an early design Confederate national flag, an ensign captured from a Confederate blockade runner in 1862, a fragment from the Smithsonian-owned flag known as “Old Glory,” a 16-star American ship’s flag, numerous 19th and early 20th century sewn and parade flags, and, perhaps most intriguingly, the flag from “The Red White and Blue,” a lifeboat which made headlines in 1866 when it became the smallest ship ever to cross the Atlantic Ocean. That flag, repurposed from a Union picket boat, the S.S. Flambeau, is also accompanied by the captain’s log and archive surrounding its journey – a journey that ended at the 1867 Paris Exhibition. A Currier and Ives print of the boat, its crew and flag is also included in the lot.

“It’s rare to see such an intact cache of material associated with a single voyage survive like this,” said company president John Case. “And it touches several areas of collecting: Civil War, flags, and maritime history.”

Other items in the LaGrone collection include an early 19th-century folk art painted regimental drum, an Andrew Jackson campaign lantern and signed War of 1812 document, a rare Secession era palmetto badge, an 1862 Confederate seal medallion struck in copper, an Andrew Johnson impeachment ticket, a rare Davy Crockett lithographed image and signature, numerous Civil War and other historical prints, and a grouping of George Washington memorabilia including a 19th-century portrait of the first president after Gilbert Stuart.

LaGrone’s collection of American Classical period furniture includes an outstanding carved sleigh bed prominently pictured in a 1999 Art and Antiques article profiling his home, as well as a fine Baltimore secretary-bookcase, a Boston dressing bureau, and a marble-topped “mixing table” used for preparing drinks, attributed to Anthony Quervelle of Philadelphia. There is also a Federal Pembroke table bearing the label of New York maker Charles Christian. There also numerous carved eagles in all sizes. Many of the items in the auction were pictured in a January 1999 feature article on LaGrone’s home and collection, published in Art & Antiques magazine.

Two limestone sculptures by Nashville-born William Edmondson (1874-1951) lead the fine art offerings: a “varmint” animal figure, and a birdbath. Both were acquired by the consignor’s parents directly from the artist. Edmondson, the Davidson County born son of freed slaves, was a self taught sculptor and the first African American artist to receive a solo exhibition at New York’s Museum of Modern Art. He is considered among the most important self-taught artists of the 20th century. From the same consignor is a portrait of a woman by Spanish born artist Angel Botello, also acquired directly from the artist.

Other art in the sale includes a tonalist landscape by J. Francis Murphy, a Smoky Mountain landscape by Rudoph Ingerle, a floral still life by Jane Peterson, and an oil painting of Elvis Presley by Tennessee native Red Grooms. The Elvis piece is one of four Grooms works in the sale, along with a portrait of LaGrone by Grooms. There are also 3 outstanding colored woodcuts by Bror Julius Nordfeldt, a Lyonel Feininger woodcut, an aquatint/etching, “The Razor’s Edge” by Robert Motherwell, a Charles Fazzino collage, and a sculpture of a man in free fall by North Carolina artist Bob Trotman, recently displayed at a North Carolina Museum of Art exhibit of his work. The auction also features a number of pieces of folk art, from a 19th century watercolor depiction of General Andrew Jackson, weathervanes, and carvings, to works by 20th century artists such as B.F Perkins, Homer Green, James Harold Jennings and R.A. Miller.

In May, Case sold a “Meet the Beatles” album for $63,250 (including premium). It was signed by all four band members and given by them to Jules Gordon, the Plaza Hotel doctor who treated George Harrison for a sore throat the day before the Fab Four’s history making appearance on the Ed Sullivan Show. The October auction will feature the second (and final) album given by the band to Dr. Jules Gordon. Like the previous album, it is signed by Harrison, John Lennon, Paul McCartney, and Ringo Starr, but also inscribed “Thanks for the Jabs!”

Silver and jewelry items account for a significant portion of the auction. A Chinese export silver presentation tray with inscription and history related to the Liddell Brothers company of Shanghai, and a single owner collection of Russian enameled silver are among the more exotic lots. But there are also many American sterling flatware sets including Tiffany, Whiting, and Gorham, hollowware, and Southern coin silver including some rare Tennessee and South Carolina makers.

Other Southern regional treasures include a Carolina Piedmont walnut secretary-bookcase, a Tennessee cherry sugar chest in original surface, a rare pair of Campeche chairs, a Kentucky painted wooden hangman’s stand, a scarce Tennessee needlework sampler, Southern quilts, and a large collection of ephemera, souvenirs, and medals related to the Tennessee Centennial Exhibition of 1897. As usual, there is a good quantity of Southern pottery, including a pitcher by Isaac Thomas of Kentucky, a Piedmont N.C. redware jug, a rare Tennessee cream pot and four jars from the recently discovered 19th century Mort pottery of East Tennessee.

A campaign chest with most of its original contents, belonging to Major Christopher Van Deventer (1788-1838) and descended in his family, is one of the most interesting military-related items in the sale. Also expected to attract attention is a Civil War era albumen print of fighting on Morris Island in South Carolina, Civil War maps and currency, tintypes of soldiers, and weapons. There are also groupings of miniature firing cannons and powder flasks from the LaGrone collection. 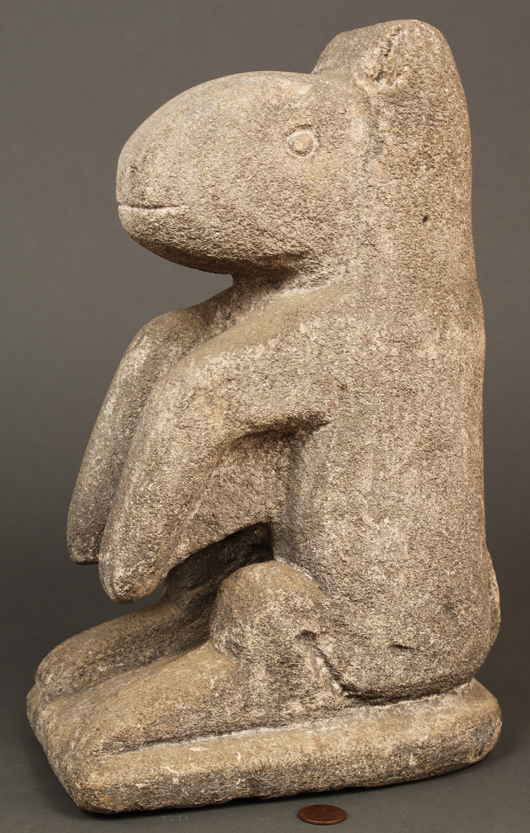 ‘Varmint,’ a carved limestone sculpture by the important African American artist William Edmondson, acquired directly from the artist, is estimated at $20,000-$30,000. An Edmondson birdbath is also being offered. Image courtesy Case Antiques Auction. 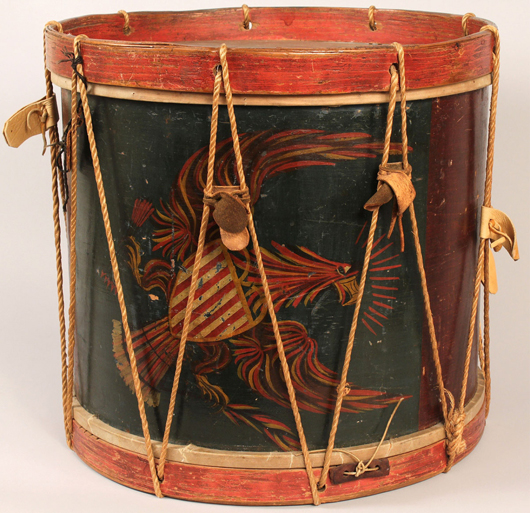 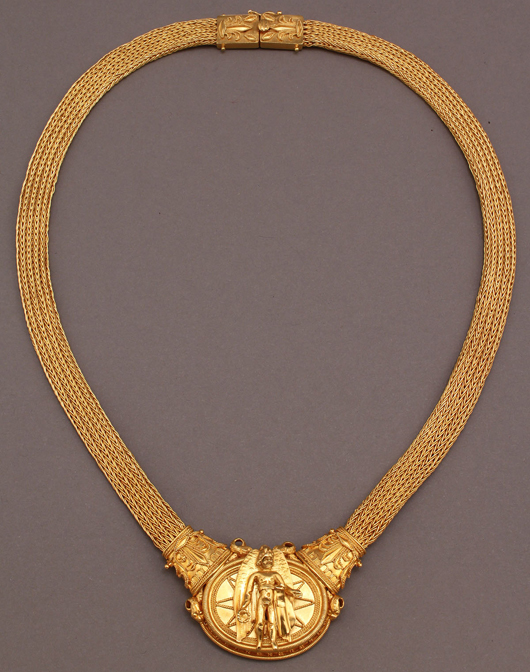 There are many silver and gold lots in the sale, including this 18K and 22KGreek Classical-style gold medallion necklace, est. $4,000-$6,000. Image courtesy Case Antiques Auction. 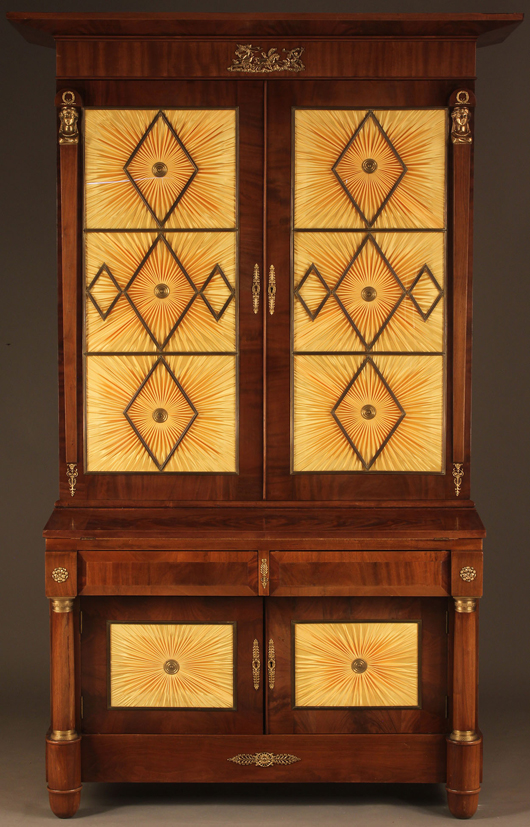 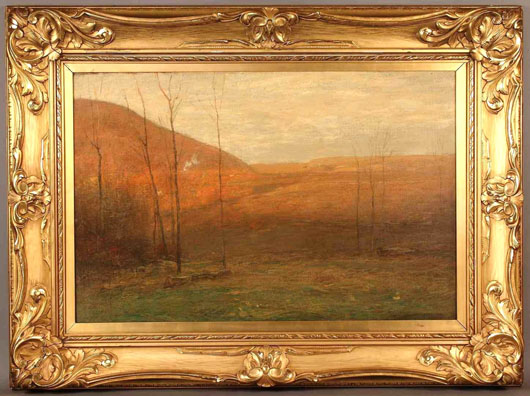