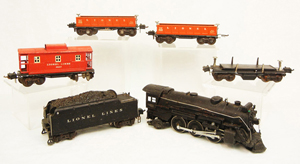 SOUTHAMPTON, Pa. – Dolls, toys and trains representing a timeline of more than 130 years will cross the auction block on Friday, June 20th at Stephenson’s in suburban Philadelphia. The 400-lot offering spans a legacy of toy making that begins with a cast-iron African-American-themed “Jolly” bank made in 1883 and runs all the way through the boomer era, represented by lithographed-tin toys of the 1950s-’60s, Lionel trains, and dolls. Internet live bidding will be available through LiveAuctioneers.


“The auction includes a mixed selection with approximately half of the lots being dolls and the other fifty percent divided almost evenly between trains and toys of various types,” said Cindy Stephenson, owner of Stephenson’s Auctioneers & Appraisers.

Impressed with a patent date of March 2, 1883, the Shepard Hardware “Jolly” bank is estimated at $400-$800. It is the only mechanical bank in the sale, but is accompanied by several still banks and circa-1960 Book of Knowledge banks that faithfully replicate antique productions.

A wide variety of toys will be offered, including 1960s GI Joes – most of them boxed and many with vehicles; pressed-steel trucks by Tonka and Nylint; and Matchbox by Lesney die-cast toy cars. Tin toys are led by colorful carnival rides: a roller coaster and Ferris wheel by Chein, and a Wolverine carousel with horses, riders and airplanes. A varied array of miniature lead figures – some manufactured by the prestigious Britains company of England – features both military and civilian examples. The figures will be sold in group lots.

A box containing 12 sets of magic lantern slides – each set comprised of 12 slides – is stamped “Germany” and almost certainly dates back to the 1930s. “We believe each of the sets is the same, so the box was probably shipped to a retailer or distributor,” said Stephenson. One of the 12 sets was carefully unwrapped and revealed within its selection a slide depicting an early, long-snouted Mickey Mouse in an encounter with a bully.

Many of the trains in the sale are by Lionel, with both pre- and postwar types included. Among the top Lionel railway entries is a No. 5340 Hudson locomotive with 700T tender, est. $300-$500. A prewar No. 225E locomotive with 2235W tender, plus cars and caboose; and a No. 2360 postwar Pennsylvania electric locomotive are individually estimated at $200-$400. Always popular with collectors, train station and track accessories will be up for bid, as well.

There will be dolls to suit every taste and pocketbook. The list includes miniature German all-bisque dolls, a 14-inch Ideal composition Shirley Temple with original clothing, and a 21-inch composition Wendy-face doll designed in the 1940s by Madame Alexander. Several bisque-head dolls are entered in the sale – among them, one by Kestner and another by Simon & Halbig Heinrich Handwerck.

For the many collectors of early 1950s Vogue Ginny dolls, Stephenson’s will offer several desirable examples dressed in their original outfits, including some in novelty attire, such as a skating outfit.

A few older Barbies and dolls depicting Ken, Midge and other Barbie friends will cross the auction block, as well, together with original tagged clothing and a few Barbie trunks. Additionally, the doll portion of the sale will include accessories and RenWal doll house furniture.

A nice addition to the auction session is an assortment of vintage Christmas decorations. Many are mid-century productions made of shiny glass.

View the fully illustrated online catalog and sign up to bid absentee or live via the Internet at www.liveauctioneers.com. 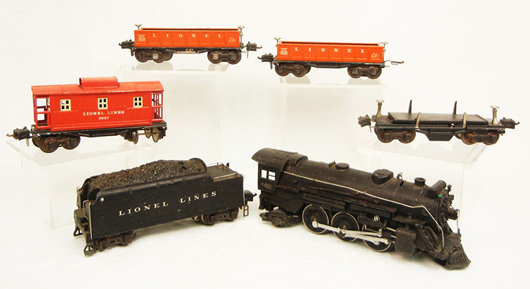 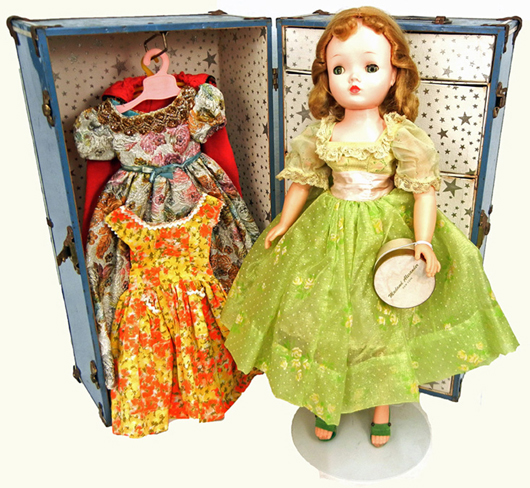 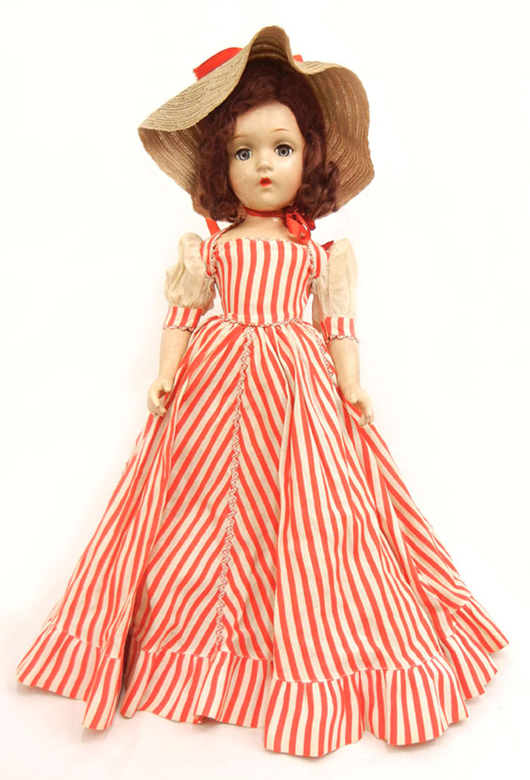 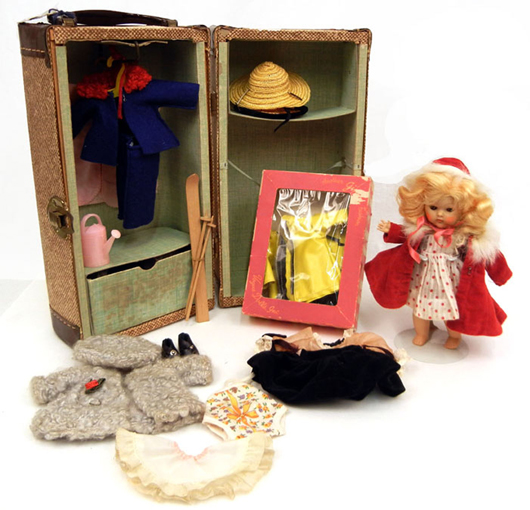 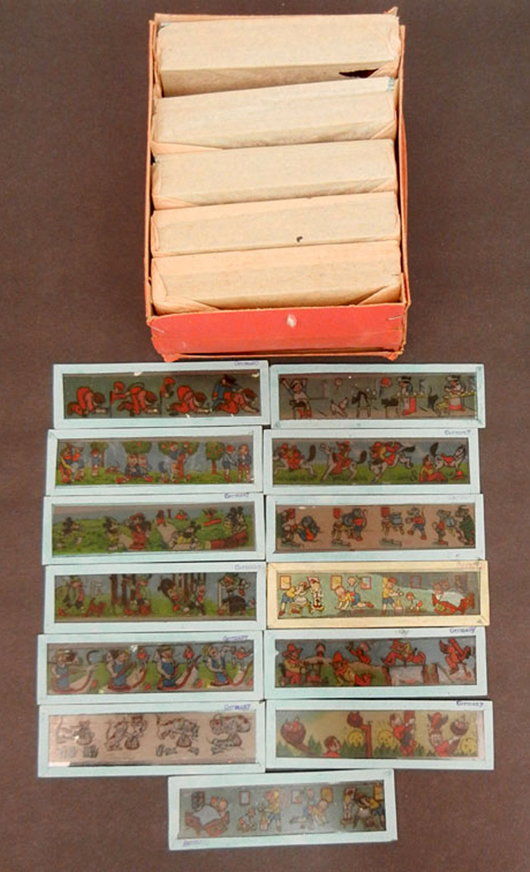 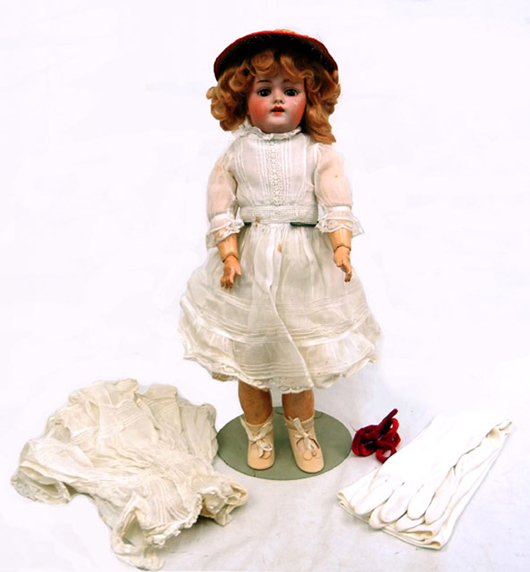 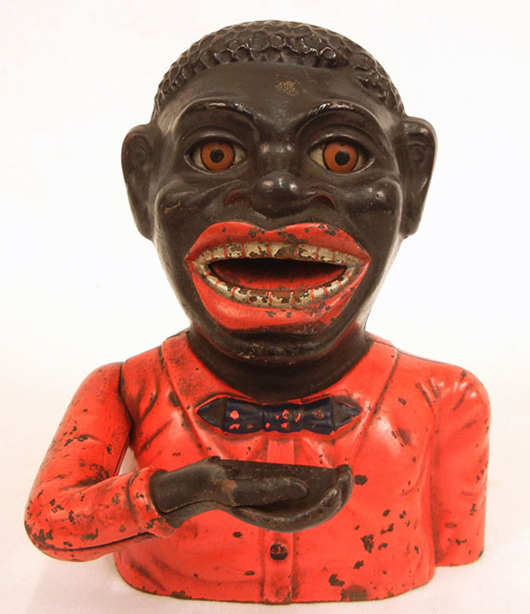 Dolls, toys and trains from estates and collections ready for play at Stephenson’s May 27 auction