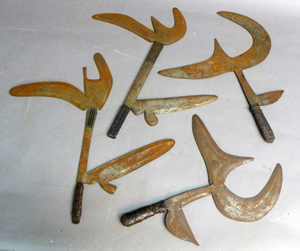 CLOSTER, N.J. – “It will creep you out,” warned Sterling Associates’ owner, Stephen D’Atri, describing the vast contents of the estate to be auctioned on Wednesday, October 22, with Internet live bidding through LiveAuctioneers. “By day, Mark Falk was a high-level government employee who went to church regularly and played music as a hobby. All of his friends say he was a wonderful, interesting guy. But what made him different was that he also had a fascination with death.”

Falk’s harmless but unusual obsession led to his amassing an extraordinary collection of sheet music, books, photographs, artwork and other objects – even human bones – that had a connection to death.

“Because of his interest in music, Mr. Falk collected hundreds of thousands of pieces of sheet music and music journals, some of them hand-published, from the 18th century to contemporary times. The music covers all sorts of themes, but we named our auction ‘Danse Macabre’ because, in one particular section of his sheet music collection, he had many renditions of the song titled ‘Danse Macabre,’ by various composers and arrangers,” D’Atri said.

D’Atri and his team spent well over two months sorting through and lotting the sheet music, which D’Atri said would appeal to individual collectors as well as online and brick-and-mortar sheet music dealers. A specialty section of the sale is geared especially toward retailers and buyers of 18th, 19th and 20th-century music.

“All of it is original material,” said D’Atri. “You can tell that, over the years, Mr. Falk bought sheet music from sources in many different countries. Many items were priced in lira, franks, Deutschmarks, or later on, in euros.”

The “macabre” section of the sale contains 50 to 60 lots of books and other literary works, many published prior to 1920. Examples include: “The Ultimate Jack the Ripper Companion,” “The Quacks of Old London,” and “Devils, Drugs and Doctors.” Some are more scientific in their approach, such as “Post Mortem – Essays, Historical and Medical,” “Mistakes and Accidents of Surgery,” and the 1866 publication “What to Observe at the Bedside and After Death in Medical Cases.” Additional subjects covered include mass murderers, poisoners, the devil, pirates, and American Indian “horrors and massacres.” Books will be offered in lots by category.

A number of large edged weapons will be auctioned, including crude African tribal daggers and Nepalese “kukris.” Among the voodoo and vampire-related items are two vampire-killing sets – one of which is housed in a large coffin – and a 24- by 12-inch voodoo priestess box that contains effigy dolls, brushes, mystical herbs and other paraphernalia. “So far, the vampire and voodoo items have been the most visited lots in our online catalog,” said D’Atri.

The macabre selection also includes taxidermied insects (tarantulas, spiders, beetles, etc.), 1850s-1870s post-mortem daguerreotypes, and several human bones. “In the bone grouping there’s a foot, hand, pelvis and a partial skull. We already have multiple absentee bids on all of them,” D’Atri said.

“Aside from the morbid aspects of Mark Falk’s estate, it contains many of the types of things you’d expect to find in a nice home,” D’Atri observed. “There are clocks, sculptures, paintings and other decorative objects.”

The auction also includes two baby grand pianos – a 2005 Vogel V 180 Royal (by Schimmel), of lacquered mahogany; and a Chickering. Both will be auctioned at the beginning of the sale, together with 150 lots of sheet music. The music section will be followed by books, then all other categories.

There are many ways to participate in Sterling Associates’ October 22, 2014 Danse Macabre Auction, but the company conducts its auctions a bit differently than most.

“All bidding is conducted remotely, but we’re very much a permanent brick-and-mortar company where anyone can come in to inspect the goods,” said D’Atri. “It will be run exactly like a live auction, but without a live audience.”

The Wednesday, Oct. 22, 2014 auction will commence at 3 p.m. Eastern Time, two hours earlier than usual. The live gallery preview is from 10-3 on Oct. 20, 21 and 22; or by appointment. The gallery is located at 70 Herbert Ave., Closter, NJ 07624. Absentee and Internet live bidding will be available through LiveAuctioneers.com.

Click to view a narrated video tour of highlights from the auction. Caution — it’s not for the faint of heart!

For additional information on any item in the auction or to reserve a phone line, call 201-768-1140 or e-mail sterlingauction@optimum.net. Online: www.antiquenj.com. View the fully illustrated catalog online at www.LiveAuctioneers.com 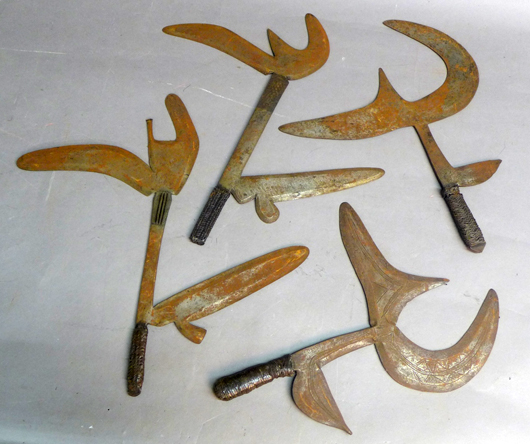 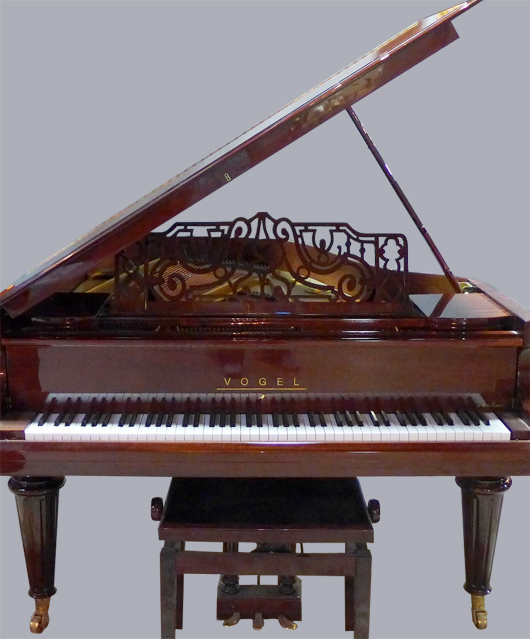 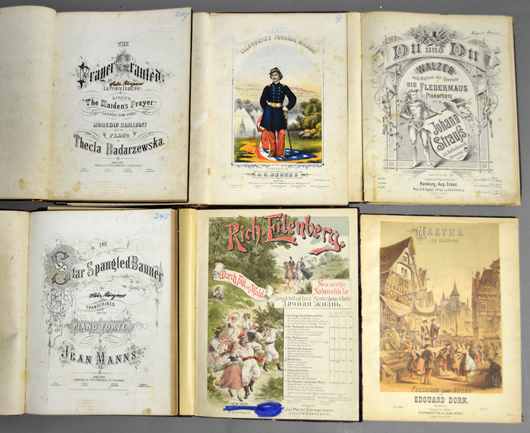 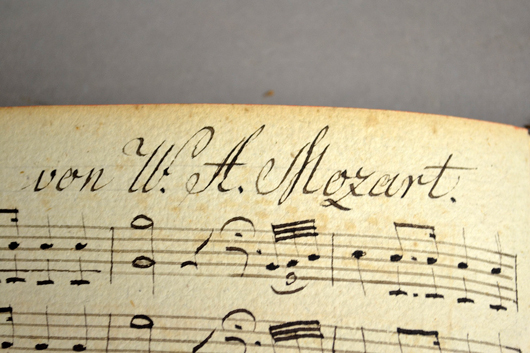 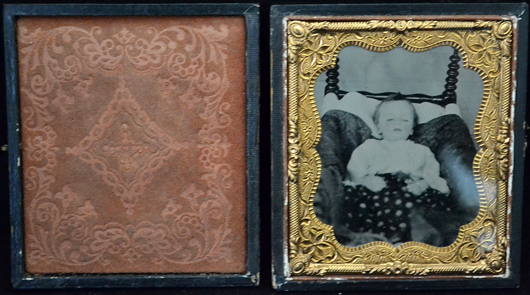 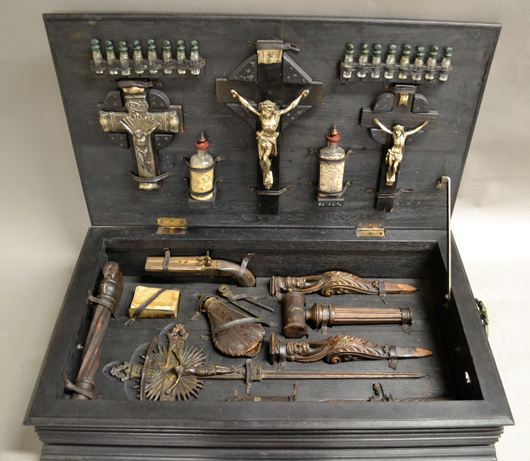 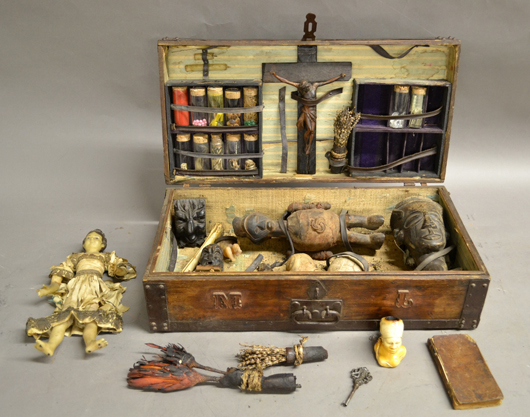 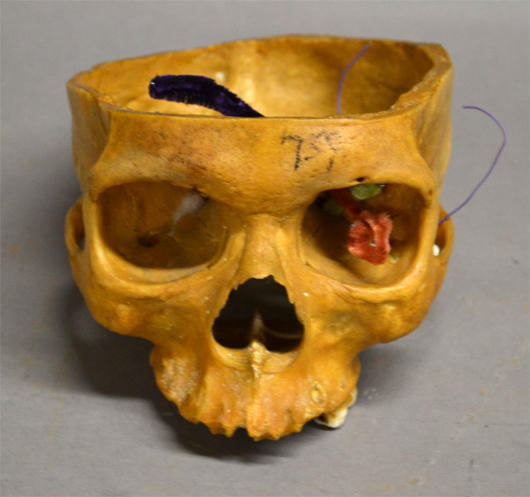 From a grouping of human bones, a portion of a skull. Sterling Associates image