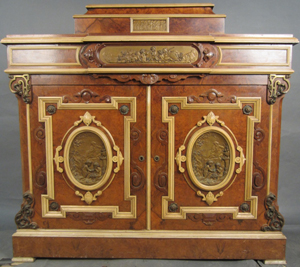 CLOSTER, N.J. – Since the beginning of commercial American railroading, trains have had a significant presence in New Jersey. Since the 1830s, hundreds of now-defunct companies operated on rail lines within the Garden State, although their landmark terminals are now long gone or, in some fortunate cases, protected as historic places.

However, few in New Jersey knew of the existence of one bustling railway hub located in the city of Maywood in the 1930s and ’40s. It operated behind closed doors in the home of the late Ray Hoelz, whose “railway yard” was built to accommodate a superb collection of oversize scale-model trains.

On Wednesday, April 24, Ray Hoelz’s remarkable assemblage of antique and pre-World War II trains, which he began collecting in 1936, will make its public debut as the headliner in Sterling Associates’ Spring Auction. LiveAuctioneers will provide the Internet live bidding.

“This is an exceptional estate collection, unlike anything we’ve seen before,” said Sterling Associates’ owner, Steven D’Atri. “Although Ray Hoelz was an accountant and auditor by profession, he came from a family with close ties to the railroad. His father worked for the Erie Railroad, so that early exposure to trains undoubtedly inspired his interest in collecting toy versions of them. His emphasis seems to have been on acquiring very large, extremely well-detailed trains, which is what collectors love.” All pieces from the collection will be auctioned individually.

The collection consists of more than 60 “third rail” train engines and cars that were either commissioned, purchased, or hand-built by Ray Hoelz. All are extremely realistic, with even greater detail than one would see on expensive antique trains, D’Atri said.

“These are big trains. The Pullman cars are almost two feet long, and some have wooden floors. Even the seats and people in the cars are minutely detailed. The freight cars have the same sort of writing and brand logos you’d see on real trains,” D’Atri continued.

Most of the manufactured or custom-made trains were produced in the 1930s by such firms as Icken, Lobaugh, Westbrook and Miniature Locomotive Company. The majority are of metal, while a few were crafted of wood. The engines, chemical cars and many of the components were expertly machined from brass and steel.

Fine, decorative and Asian art, as well as estate jewelry and other antiques comprise the greater portion of the 500-lot auction. The 50-lot jewelry section is led by a sparkling 2-3/4 carat GIA-certified diamond and platinum engagement ring with matching wedding band. It is followed by various other jewelry designs and forms, mostly gold.

A wonderful array of bronzes includes 19th-century through contemporary works. Highlighting the group are a silvered Russian bronze after Lanceray titled “Don Cossacks Crossing the Balkans,” and a large hunting dog bronze by Auguste-Nicolas Cain (French, 1821-1894). The names of the dogs – Caron and Pompier – are branded in the ground. Also on offer is a well-executed life-size bronze torso by Greg Wyatt.

Among the paintings chosen for the sale are a George Morland (British, 1762-1804) oil-on-canvas winter landscape with horses, and an Italian masterpiece depicting the interior of a church with people. Both artworks are of “exceptional quality,” D’Atri said.

Sterling Associates is known for its ability to source fresh-to-market Asian art and antiques. The April 24 auction includes a varied selection of fresh works from an Asian collector in New Jersey who trusted his well-cultivated eye and always bought wisely. The consignment includes porcelains, including a pair of circa-1750 Chinese Qianlong famille rose vases, and a Chinese painting of a foggy mountain scape with calligraphy and seals on woven paper laid to silk.

An eclectic grouping of 19th- and 20th-century lighting and accessories will cross the auction block, as will a nicely blended offering of furniture from multiple sources. A top furniture piece is an American Renaissance Revival walnut cabinet attributed to Herter.

Diversity is evident in the assortment of items Stephen D’Atri has selected for his Spring Auction. At the fine-art end of the collecting spectrum there is an 1870s connoisseur’s book, French, with exquisitely engraved images and titled “Le Tresor Artistique de la Musee National de Louvre et Galerie d’Apollon,” Volume I. “A few years ago, Sotheby’s sold a similar book for $7,000-$8,000,” said D’Atri. “What makes this book especially unusual is its size – it’s two feet by 18 inches and probably 4 inches thick.”

On the vintage collectibles side, there are two Wurlitzer 1050 “bubbler” jukeboxes, and for the scientifically inclined, there’s an 1850s daguerreotype lens made by C.C. Harrison. It has a large brass cylinder encasing the lens and is marked with a serial number and the manufacturer’s name. “Photographic antiques are hot at the moment, and we already have multiple absentee bids on it. I think this lens is going to fly,” D’Atri said.

Sterling Associates’ Spring Auction will be held on Wednesday, April 24, 2013, starting at 5 p.m. Eastern Time. It is structured as a hybrid auction in which previewing is available at the physical gallery, but all bidding is exclusively absentee, by phone or live via the Internet through LiveAuctioneers. The sale will be run exactly like a live auction, but without a live audience.

View the fully illustrated catalog and sign up to bid absentee or live during the auction at www.LiveAuctioneers.com. 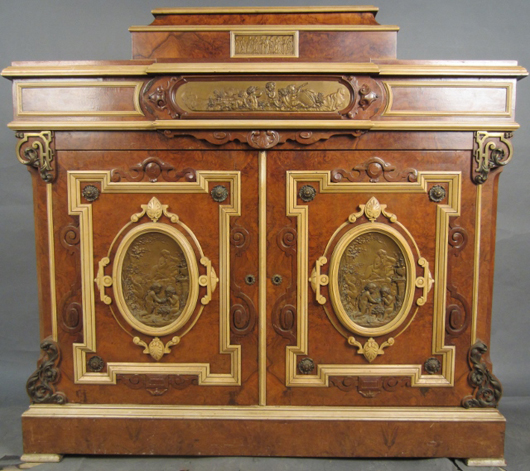 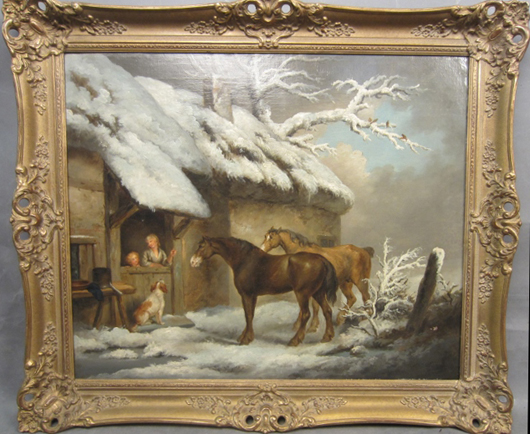 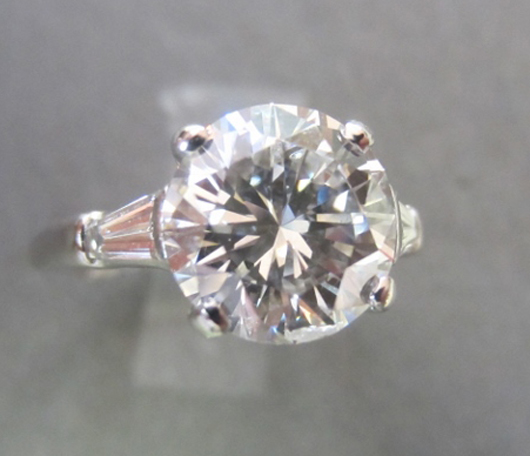 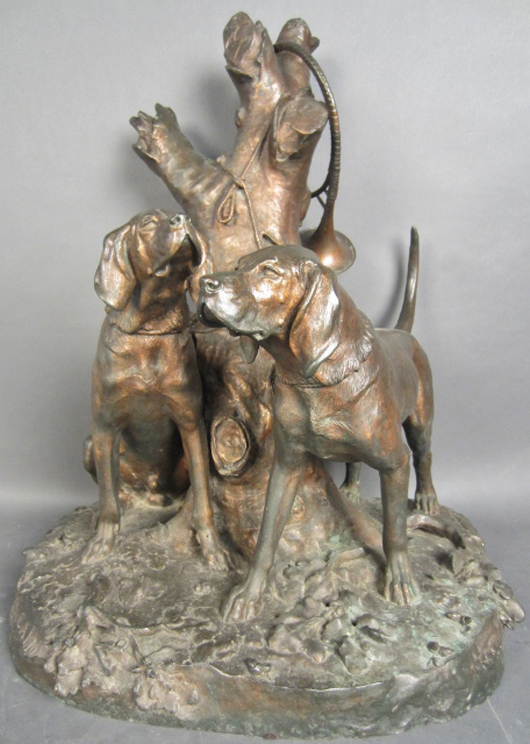 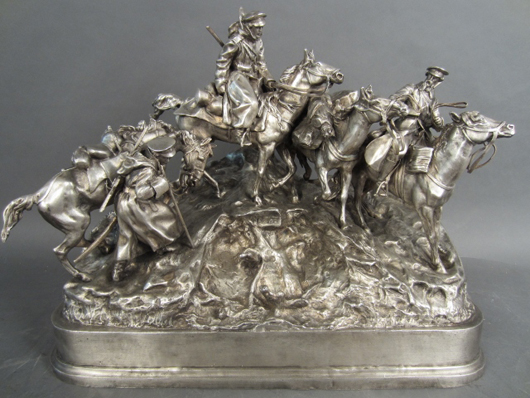 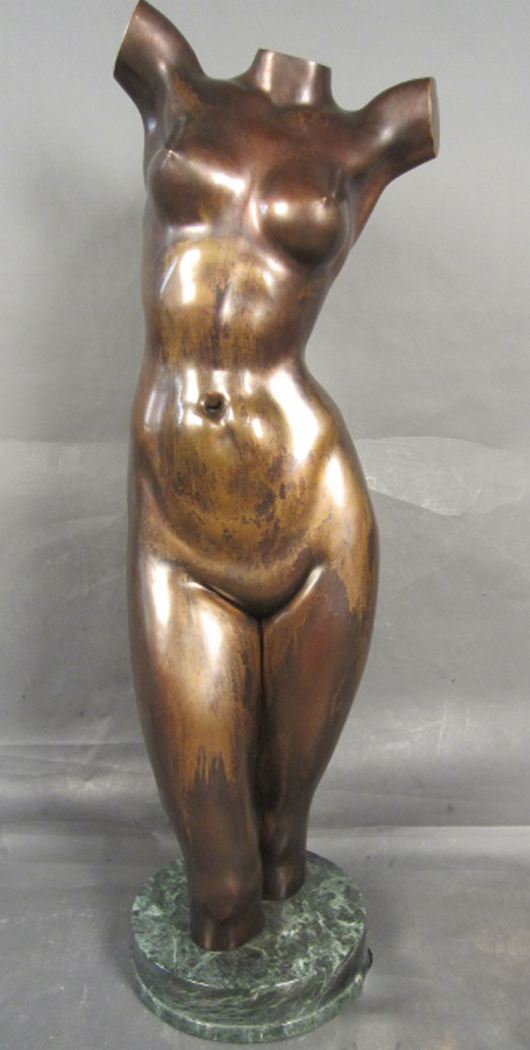 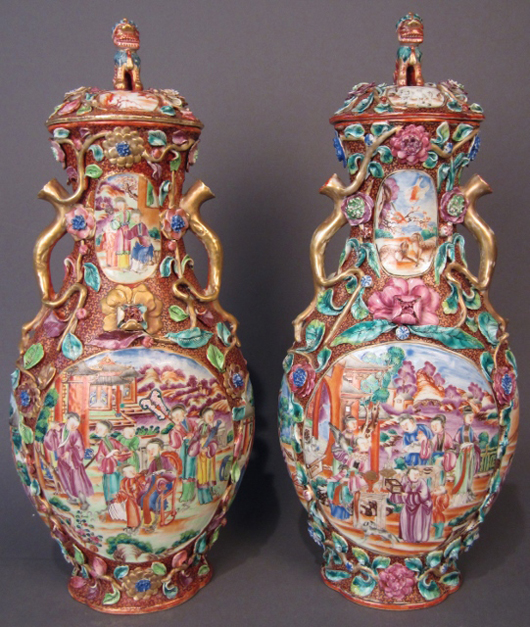 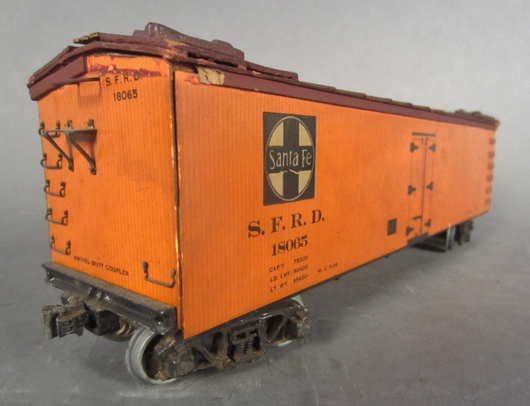