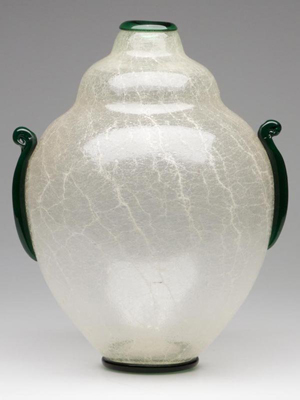 This Primavera-style art glass vase is attributed to Barovier e Toso and designed by Ercole Barovier. With faint cracks around one handle, this circa 1929 piece is estimated at $800-$1,200. It stands 12 1/2 inches high. Image courtesy of Jeffrey S. Evans & Associates.

MOUNT CRAWFORD, Va. – Jeffrey S. Evans & Associates will conduct their first Variety Auction on April 23, but if preliminary interest is any indication it won’t be the last. LiveAuctioneers will provide Internet live bidding for the auction, which begins at 11 a.m. Eastern.

“The Louis Vuitton suitcase has gotten a lot of attention and the real photo postcards are of great interest to many collectors,” said Jeffrey Evans.

The auction begins with nearly four-dozen lots of postcards, nearly all of them in multiples.

“There’s also a lot of interest in an Italian glass vase even though it has some damage,” he said.

The 12 1/2-inch Primavera-style art glass vase is attributed to Barovier e Toso and designed by Ercole Barovier. The body is colorless, textured with veining and open bubbles, and has emerald green applied rim, handles and foot. Faint cracks are noted where one handle has been applied. It carries an $800-$1,200 estimate.

Evans said that Mid-Century Modern pieces in the sale have generated interest, including two pieces of Blenko Glass. “And silver always has a strong following and we have a nice selection in this sale,” he said.

The auction consists of fresh offerings from the Juanita G. Hawley estate of Broadway, Va., the Hilda Fried estate of New York City, the Fern I. Hill estate of Beaver, Pa., and others. 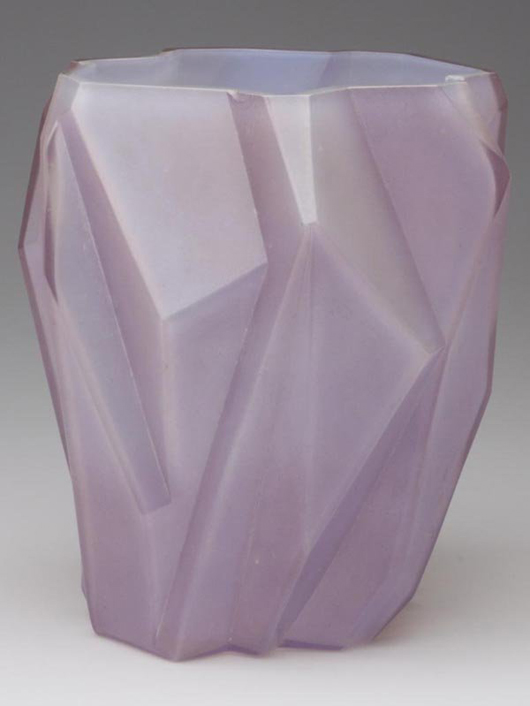 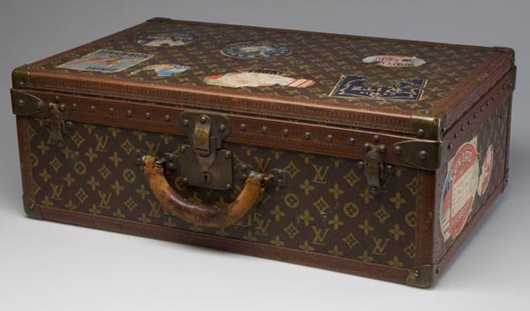 Wiley Buchanan (1914-1986), a U.S. Ambassador to Luxembourg in the mid-1950s, likely used this Louis Vuitton suitcase. The small suitcase bears the Cunard Line State Room label of a passenger aboard the Queen Mary. Festooned with travel stickers, the bag has an $800-$1,200. Image courtesy of Jeffrey S. Evans & Associates. 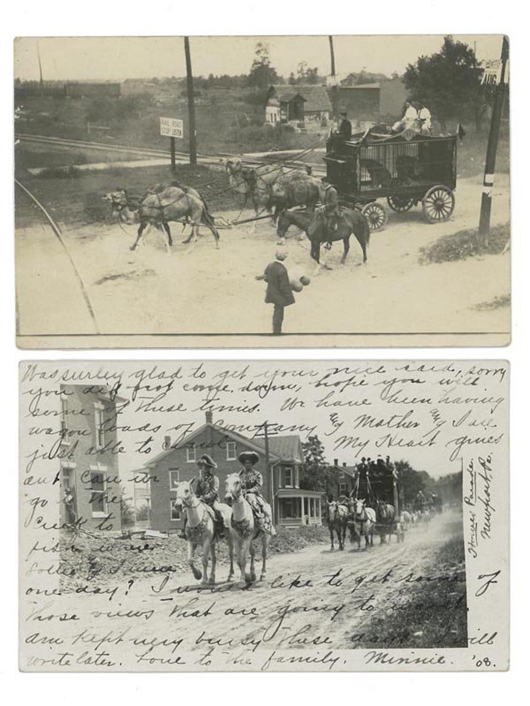 Real photo postcards have generated much interest in the Jeffrey S. Evans and Associates auction. This lot of two cards shows a circus parade rolling through a town in advance of their performance. The two-card lot is estimated at $50-$100. Image courtesy of Jeffrey S. Evans & Associates.

Blenko Glass has gotten a boost from the popularity of Mid-Century Modern designs. This 20 3/4-inch-tall piece is a Wayne Husten design no.552 Portrait Vase. It has a $100-$200 estimate. Image courtesy of Jeffrey S. Evans & Associates.

African art, fresh collections of toys, advertising at Morphy’s, May 13-1...

To settle lawsuit, Fresno museum to return Ansel Adams photos to his son
Scroll to top