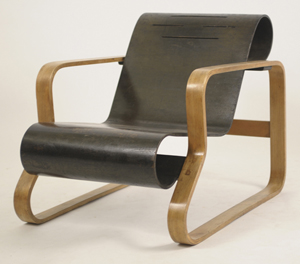 Iconic bentwood armchair designed by Alvar Aalto (Finnish, 1898-1976), manufactured in 1932. To be offered at auction Jan. 29 by Sworders in England with Internet live bidding through LiveAuctioneers.com. Estimate: £5,000 to £7,000. Sworders image.

ESSEX, England – A classic chair by one of the leading modernist designers of the 20th century will soon be offered for sale at auction. Sworders Fine Art Auctioneers based in Stansted Mountfitchet, England, are selling a chair by the Finnish designer Alvar Aalto (Finnish, 1898-1976) at their Decorative Art and Design Sale on Tuesday, Jan. 29, 2013. LiveAuctioneers.com will provide the Internet live bidding.

The bentwood-frame chair called “Paimio” is named after the town in southwestern Finland for which Aalto designed a tuberculosis sanatorium and all its furnishings. The angle of the back of this armchair, which was used in the patients’ lounge, was intended to help sitters breathe more easily.

The chair is thought to be one of the first examples of this design and dates back to 1932. Although this is now a familiar style of chair, this particular example is likely to attract the attention of collectors and museums as being a prime example of design from the vanguard era of 20th-century modernism.

Sworders’ director, John Black, said: “What’s exceptional about this piece is that even today it looks incredibly modern, but is in fact 80 years old. Back in 1932, this would have been an absolute statement piece of furniture, and that’s what makes it so attractive even today.’

The consignor of the Alvar Aalto chair purchased the iconic furnishing through eBay. He suspected it to be one of Aalto’s classic pieces, and his find was confirmed by experts at Sworders. It’s now being auctioned with a presale estimate of £5,000 to £7,000.

The sale also includes designs by Dame Lucie Rie, arguably the greatest British female potter of the 20th century. Rie was one of the leading post-World War II potters who looked to Japan for inspiration and revolutionized British studio pottery. Her iconic studio has been recreated as an exhibit in the Ceramics Gallery of the Victoria & Albert Museum. Three Rie-designed bowls and a vase are being sold with guide prices between £200 and £1,000.

The Decorative Art and Design Sale will be held at Sworders on Tuesday, Jan. 29, 2013. View the fully illustrated catalog and sign up to bid absentee or live via the Internet at www.LiveAuctioneers.com. 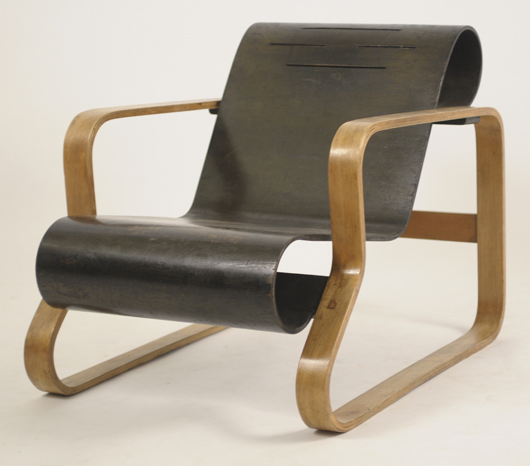 Iconic bentwood armchair designed by Alvar Aalto (Finnish, 1898-1976), manufactured in 1932. To be offered at auction Jan. 29 by Sworders in England with Internet live bidding through LiveAuctioneers.com. Estimate: £5,000 to £7,000. Sworders image. 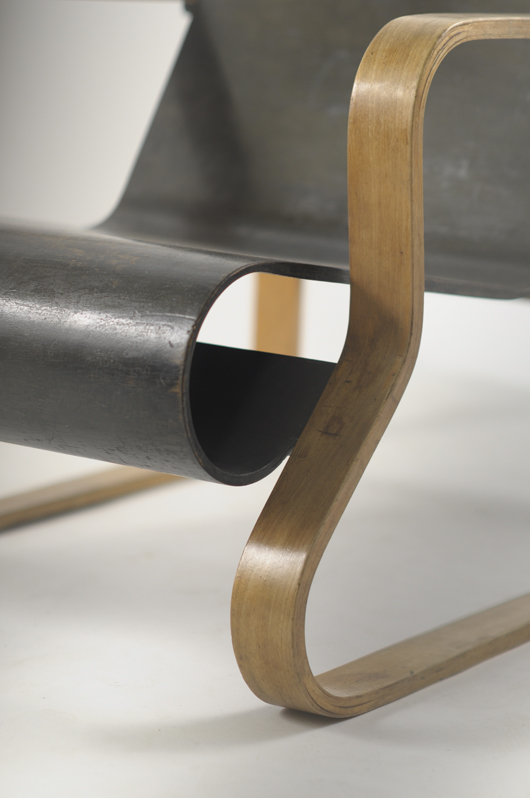