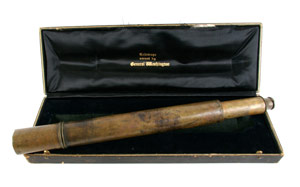 CHICAGO – A telescope believed to have belonged to George Washington, and last offered as such in 1920, will be sold at a Fine Furniture & Decorative Arts Auction scheduled for Oct. 5-6 by Leslie Hindman Auctioneers. It is expected to fetch $10,000 or more. The spyglass has been consigned by the renowned Illinois Institute of Technology.

George Washington owned many telescopes during his lifetime, having eleven in his collection at the time of his death in December 1799. Several of these are now housed in the Smithsonian, Mount Vernon and other esteemed institutions.

The telescope to be sold is engraved with the markings “Dolland London” and “G. Washington Mount Vernon.” It was sold at auction by the American Art Association in New York, on Feb. 20, 1920. The auction featured a number of items once owned by Washington – including cut-glass decanters, clothing and buttons – from the collection of William Lanier Washington, a descendant of the first president.

Mr. Washington signed an affidavit after the sale, declaring the telescope (and other items in the sale) were indeed once owned by his famous relative. The telescope was acquired by George D. Smith, a book dealer in New York City who often made purchases on behalf of prestigious clients across the country. The auction was covered in detail in the next day’s The New York Times.

The telescope is accompanied by a silk-lined Moroccan leather case, inscribed, “Telescope owned by George Washington” (also part of the 1920 sale).

For more information about the Oct. 5-6 sale, or to learn more about Leslie Hindman Auctioneers, log on to www.LeslieHindman.com. Or, you may call them at 312-280-1212.