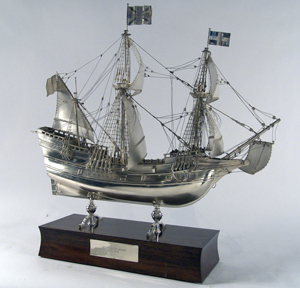 BOSTON – An exciting, 400-lot Marine Auction will be conducted Sunday, Nov. 7, by Boston Harbor Auctions at the Lannan Ship Model Gallery of Boston. The auction, which will begin at 11:30 a.m. Eastern, will also feature some nonmarine themed pieces of furniture and gentlemen’s antiques. LiveAuctioneers will provide Internet live bidding.

The exciting auction will be featuring many exclusive items relating to the prestigious New York Yacht Club, pioneers of the history of the America’s Cup competitive involvement in yachting. Model boats will include those made famous from the New York Yacht Club founded America’s Cup, such as Enterprise and Rainbow. Financier J.P. Morgan, one of the New York Yacht Club’s famous members, will be profiled in this auction as items from his yachts Corsair including an asparagus plate and a demitasse cup and saucer are to be sold. Additionally, artwork that has commemorated Morgan’s contribution to the history of yachting such as an engraving of the Corsair by known Boston marine artist Burnell Poole (1884- 1933), a charcoal gauche rendering of Morgan standing on the deck of a yacht, and fine steam yacht models of the Corsair built from the blueprint plans of the actual vessels on which he traveled for business and pleasure will surely be high points of the sale.

Another celebrated figure of yachting in America is Arthur Curtiss James, railroad industrialist, accomplished equestrian and avid yachtsman, who in 1926 built the largest and finest, full-rigged yacht ever built, the Aloha. Boston Harbor Auctions will sell several pieces from the Aloha including the launch’s tiller, pieces of china, a silver pitcher and a desk set.

For ocean liner enthusiasts, Boston Harbor Auctions will be auctioning a fine, 6-foot model of the Titanic, a beautiful wood and wrought iron door from the RMS Aquitania (1919-1935), a complete silver coffee service set with tray from the United States Lines “SS United States” (1952 – 1969) and a set of wine and beer bottles pulled from the 1909 wreck of the White Star liner Republic after its collision with the SS Florida, an inbound passenger ship carrying Italian immigrants, off the coast of Nantucket.

Atlantic, the steam auxiliary schooner from 1904, having fantastic presence in this sale, held the record for the fastest trans-Atlantic crossing for over 100 years. Highlighted will be a series of 45 original black and white photographs taken on board Atlantic during the race in which she set the record including images of Capt. Charles Barr. To commemorate the fantastic story of Atlantic, original blueprints of the vessel and fine models of the beautiful schooner are to be showcased.

A unique and intriguing chart of South America from 1822 that was used for navigational purposes for a voyage in 1853 will cross the auction block. Various legs of the voyage are marked in pencil by the captain. There are 30 rare, framed charts in the auction.

Leather-top game tables, a Sheraton desk, leather benches and stools, carved eagles, vintage pond yachts with varnished hulls and polished brass fittings, antique builder’s half models, and as always a wide selection of lanterns and lighting, charts, paintings, compasses, telegraphs and binnacles will be available. Dozens of exquisite model boats will be offered including tugs, lightships, clippers, whalers and sloops.

The entire sale can be viewed online at bostonharborauctions.com 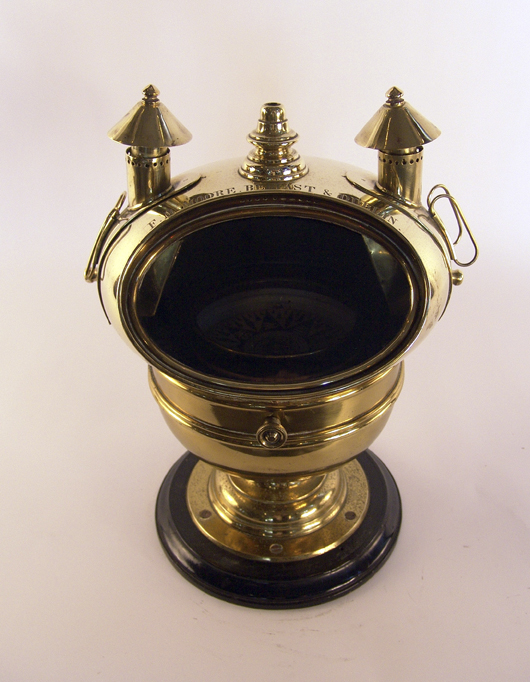 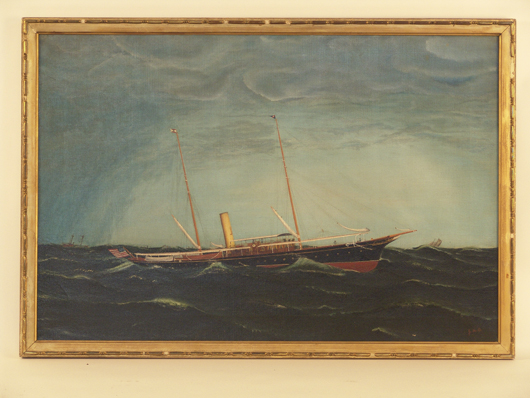 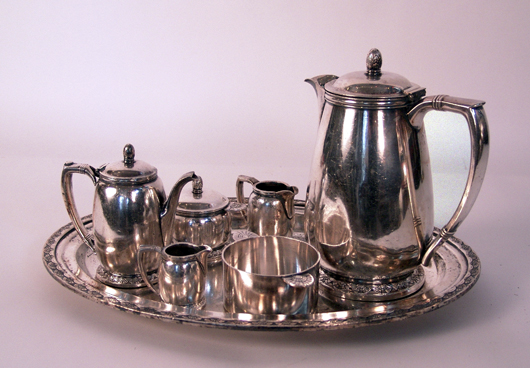 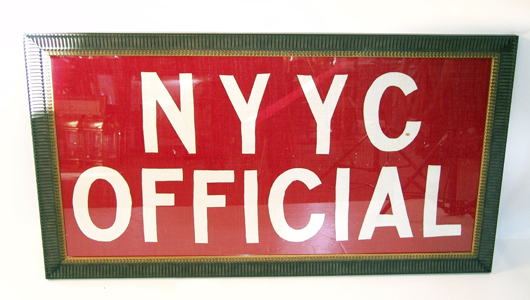