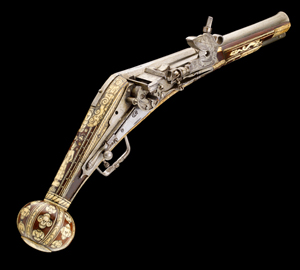 LONDON – Schloss Langenburg is the ancestral seat of the Princes Hohenlohe-Langenburg in southern Germany and is today the family home of Princess Saskia and Prince Philipp zu Hohenlohe-Langenburg. The historical arms and armor from the Schloss Langenburg armory will be offered for sale in Thomas Del Mar Ltd.’s auction of antique arms, armor and militaria, which will be held at 25 Blythe Road, London W14 on Wednesday, Dec. 3.

“The decision to sell a portion of the armory from Schloss Langenburg has been taken with sole intention of raising funds for the ongoing conservation of the historic architecture of this impressive castle and to expand the public display of the interior of Schloss Langenburg and the castle museum,” said Thomas Del Mar. “The majority of the pieces included in this auction have never been on public display and after consideration it has been decided to make these pieces available to those who would best appreciate them and be in a position to have them correctly restored.”

A notable historical characteristic of the Hohenlohe-Langenburg line is the families’ close links with Europe’s Protestant ruling dynasties, especially their close relationship with the British Royal Family. This began in 1828, with the marriage at Kensington Palace of Prince Ernst zu Hohenlohe-Langenburg to Princess Anna Feodora zu Leiningen, the half-sister of the future Queen Victoria.

An English cased percussion sporting gun made for Prince Alfred as a small boy in about 1850 – by Westley Richards of London and Birmingham, Gunmaker to H.R.H. Prince Albert, possibly the gift of his father – is included in this sale, having descended from Alfred to Princess Alexandra at Schloss Langenburg. H.R.H. The Prince Alfred was born on April 6, 1844, the second son and fourth child of H.M. Queen Victoria and H.R.H. The Prince Albert. Prince Alfred Ernst Albert was second in line to the throne, and as such from 1866 he was entitled The Duke of Edinburgh. The gun descended from him to his third daughter, H.R.H. The Princess Alexandra (1878-1942), the wife of Ernst II, Prince zu Hohenlohe-Langenburg. The gun has remained at Schloss Langenburg. The gun and its case each bear an escutcheon engraved with a coronet of the British Blood Royal. The proportions of the gun are in keeping with those of a young boy (84.5cm; 33 1⁄4 inches overall) and carry an estimate of £5,000-7,000.

The family link between the Windsors and the Hohenlohe-Langenburgs remains a strong one. H.M. The Queen visited Schloss Langenburg during her German state visit in 1965, together with H.R.H. The Duke of Edinburgh and his sister, H.R.H. Princess Margarita. The original Mercedes 600 in which they toured is today preserved in the car museum at the castle.

The collection is composed of 158 lots, of which 89 are antique firearms ranging in date from 1525-1860. The core of the firearms collection is formed of wheel-lock and flintlock firearms, including 19 pairs of holster pistols such as an exceptional pair of Bohemian silver-mounted examples by Paul Poser in Prague, circa 1725, which carries an estimate of £18,000-20,000.

A fine and rare Nuremberg wheel-lock sporting carbine stocked by the so-called “Master of the Castles,” dating from circa 1600, is estimated at £25,000-30,000. The barrel and the lock are etched with scrollwork, while the stock is veneered in ebony and profusely inlaid with finely engraved contrasting plaques of white horn and mother-of-pearl in the style characteristic of this unidentified but highly celebrated stock maker. A rare two-shot superimposed-load wheel-lock pistol that was also made in Nuremberg, circa 1585 carries an estimate of £12,000-14,000.

Many of these pistols and sporting guns are of luxurious quality in keeping with a princely Gewehrkammer (chamber) and others combine technological systems rarely seen on the international market. A French bronze mountain howitzer and its carriage captured in the war of 1870 would be a striking addition to any setting and is estimated at £6,000-8,000.

Also included are a broad historical range of swords, notably a group of 17th century dress-and hunting-swords with carved ivory hilts. A German town sword with a finely carved ivory memento mori hilt, dated 1656 is estimated at £6,000-8,000. The entire hilt is carved in relief as a series of serpents entwined with toads and human bones and the pommel formed as skulls. 1656 was the year in which the plague epidemic killed 145,000 in Rome and 300,000 in the Kingdom of Naples.

The balance of the Langenburg selection is made up of elements of armor, a further tangible link with the history of the castle.

A rare and exceptional South German heavy bronze wallgun (doppelhaken), dated 1525, with a barrel measuring 57 1/4 inches is expected to fetch £6,000-7,000. Hand-ignited guns of this large size were intended to be fired from a stand or tripod carriage and served by two men as a piece of light artillery.

The castle is situated on a spur overlooking the spectacular Jagst river-valley in the Hohenlohe region of Northern Baden-Württemberg. First recorded in 1226, the castle was given in 1235 to Count Gottfried von Hohenlohe-Hohenlohe by his cousin, Walther von Langenburg, each supporters of the Emperor Friedrich II. From this period onward the history of the castle is inexorably entwined with that of the Hohenlohe-Langenburg line. Each has undergone the inevitable and significant developmental changes which history brings, and in the case of the dynastic line of statesmen, military commanders and patrons of the arts this fascinating complexity is well worth a separate study.

The Hohenlohe family ruled as Imperial Counts (Reichsgrafen) from 1450 and its two early principal branches were created Princes of the Holy Roman Empire in 1744 and 1764 respectively. In 1551 Count Georg I divided the various Hohenlohe estates and castles between his sons, creating the branches Hohenlohe-Neuenstein and Hohenlohe-Waldenburg, the first of the numerous and complex cadet branches of the Hohenlohe family line. The Hohenlohe-Langenburg branch is descended from the Protestant Hohenlohe-Neuenstein line, the key to its historical development from the 16th century to the present day. In 1806 the Hohenlohe principalities lost their independence upon their mediatisation to the Kingdoms of Württemberg and Bavaria.

The fabric of the castle is a chequerboard of changing function and architectural style. The four large round towers at each corner of the original Staufer weir date from the early 13th century but the castle as a whole underwent two substantial refurbishments, the first in 1610 as a Residence in the High Renaissance fashion under the direction of Count Philipp Ernst (1584- 1628); the existing inner courtyard and some stucco ceilings originate from that time. The castle next underwent significant Baroque modifications under Count Ludwig (1696-1765), matched by his own elevation to Riechsfürst in 1764. The castle has remained in Hohenlohe ownership since the 13th century, uninterrupted except for a brief period of occupation in 1634 by opposing Imperial forces during the Thirty Years’ War. 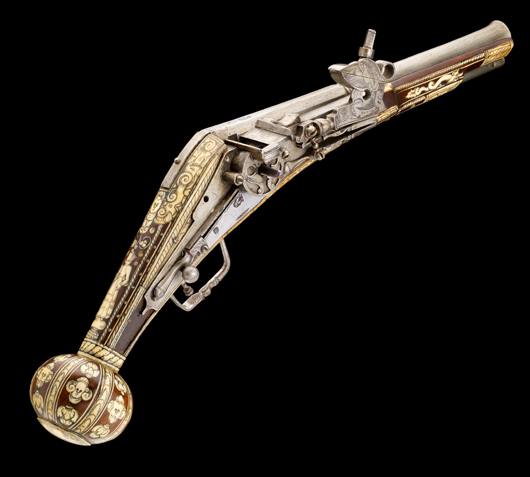 Rare south German heavy bronze wall gun (doppelhaken), dated 1525. Hand-ignited guns of this large size were intended to be fired from a stand or tripod carriage and served by two men as a piece of light artillery. Estimate: £6,000-7,000. Thomas Del Mar Ltd. image 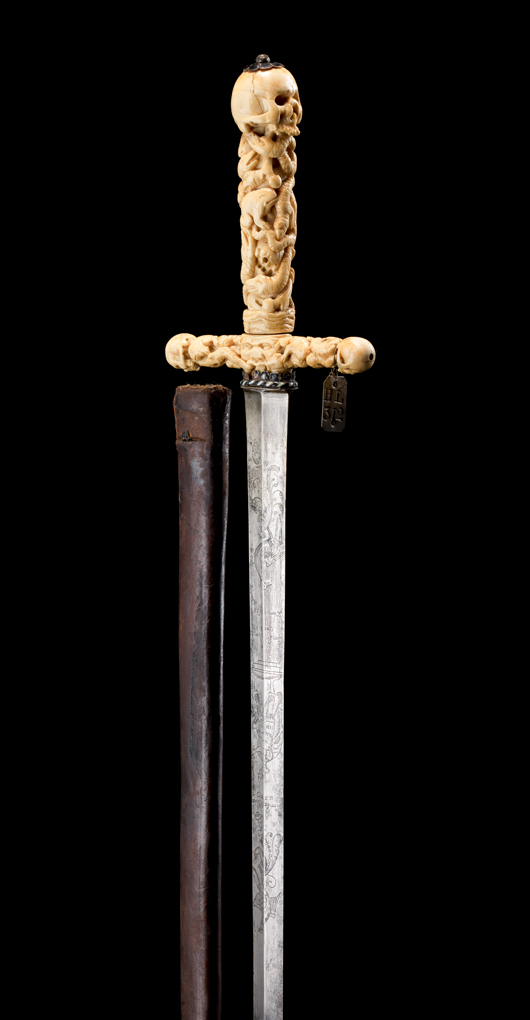 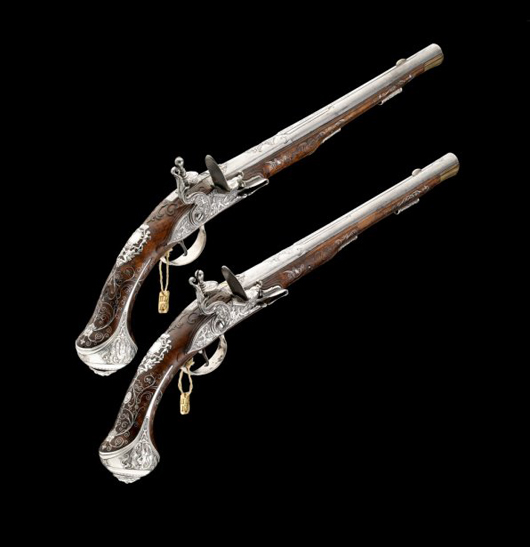 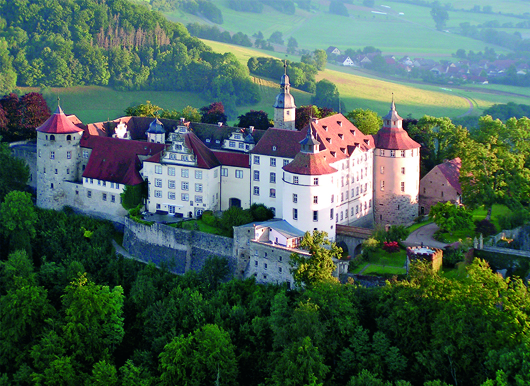 LiveAuctioneers announces $47.6M round of funding led by Bessemer

Departing Smithsonian head reflects on its progress
Scroll to top