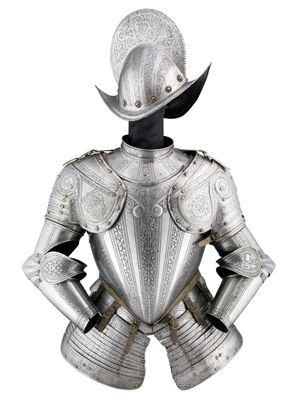 LONDON – Items from such iconic U.S. institutions as the Metropolitan Museum of Art and the Art Institute of Chicago are among the highlights of Thomas Del Mar Ltd.’s auction of Antique Arms, Armor and Militaria to be held Wednesday, June 25.

A composite North Italian etched corslet dating from the late 16th century, which was once owned by Prince Peter Soltykoff until 1860 and is now being sold by order of the trustees of the Metropolitan Museum of Art, is expected to fetch £12,000-18,000. The corslet is composed of a a breastplate and a back piece, and is finely decorated with bands and borders of relief-etching on a stippled and blackened ground involving at the top of the breastplate the figure of St. John the Baptist holding a banner with the abbreviated inscription AD for Agnus Dei.

More than 20 lots from the George F. Harding Collection are being sold by the Art Institute of Chicago to benefit the Harding Collection. Included is a mounted armor for the Jousts Real in the Spanish style of circa 1500-10, consisting mainly of 19th century pieces with some early 16th century elements of great weight, which is expected to fetch £15,000-20,000. The horse-bit is probably of 17th century date and is known to have belonged to His Imperial Highness Archduke Eugen Veste Hohenwerfen of Salzburg, until 1927. A fine pair of 16-Bore Liegois flintlock holster pistols by Jean Jaques Behr, circa 1720-30, which belonged to Ernst August I, Grand Duke of Saxe-Weimar (1688-1748), and subsequently Wilhelm Ernst, Grand Duke of Saxe-Weimar-Eisenach (1876-1923), carry an estimate of £8,000-10,000.

Also from the United States is a group of English and European  small-swords from the Lattimer Family Collections of New  Jersey. The Lattimer Family Collections have been described as a virtual military museum, his late 19th century Federal style home being filled with numerous historic pieces including edged weapons, Revolutionary and Civil War rifles, swords and huge turret mounted machine guns from World War I. Decorated small swords, notably those with historic provenance, were an area of particular interest to Lattimer, and a distinguished group from his collection is now on display in the Metropolitan Museum of Art, New York.

The auction will also include Part Two of the Morton and Angela Stern Collection. The Sterns, who lived in New York, shared a passion for antiques and in particular arms and armor. Together they traveled extensively, visiting museums, fairs, auctions and gun shows making many acquisitions together. The objects offered in Thomas Del Mar’s Auction reflect their combined broad tastes, including some fine examples of European edged weapons, armor and a number of distinguished examples of the gunsmith’s skill as both engineer and decorator. Mort had a particular interest in military firearms and Angela in Scottish firearms.

Among the notable pieces is a fine German sword-rapier with blackened iron hilt dating from the late 16th century which is estimated at £6,000-8,000, while a North Italian close helmet for heavy field use, probably Milanese, dating from circa 1580 carries a similar estimate, and a fine pair of 38-bore Scottish flintlock belt pistols by I. Christie of Perth, and dating from circa 1780, is expected to fetch £5,000-7,000.

Also with a distinguished provenance is a fine and rare cased pair of 28-bore French silver-mounted flintlock pistols of presentation quality by Boutet, Directeur Artiste, Manufacture a Versailles, circa 1802, which are expected to fetch £40,000-70,000. These are being offered by the descendant family of Don José de la Serna, Conde de Los Andres, Viceroy of Peru (1770-1832). They are signed within a lozenge shaped framework of gilt pellets, decorated in gold with bands filled with contrasting matted and plain triangular panels at the muzzle.

Elsewhere in the auction is a rare East Tibetan decorated leather lamellar armor dating from the 15th/17th century, which is in very fine condition. Formed of two pairs of plates covering the chest and the back of the torso, open at the front and fitted with two slender plates at each side, it is decorated in gold with large flower heads and foliage and is expected to fetch £5,000-7,000.

One of the larger and more unusual pieces in the sale is a rare example of the skull and antlers of an Irish elk (megalocerus giganteus), measuring just over three meters and dating from the Pleistocene period (2.6 million year to 117,000 years before the present). It carries an estimate of £20,000-30,000.

Among the firearms is a fine pair of 20-bore Liegois flintlock long holster pistols, dating from 1700, probably by Philippe Desellier – the octagonal breeches chiseled with a classical warrior above a crowned heart impaled by a sword carry an estimate of £10,000-15,000. The Desellier brothers, Philippe and Gilles, are recorded in Liege circa 1676-1740 and 1680-1710 respectively. A fine and rare 25-bore South German (Thuringia) wheel-lock pistol, Suhl, circa 1580-90 – chiseled over its surface with a vertical arrangement of allegorical figures within an architectural framework surrounded by scrolling foliage inhabited by exotic birds is estimated at £8,000-12,000. 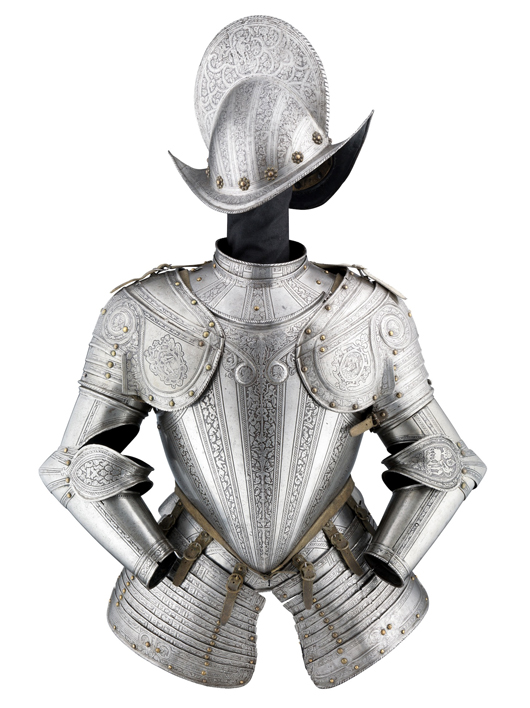 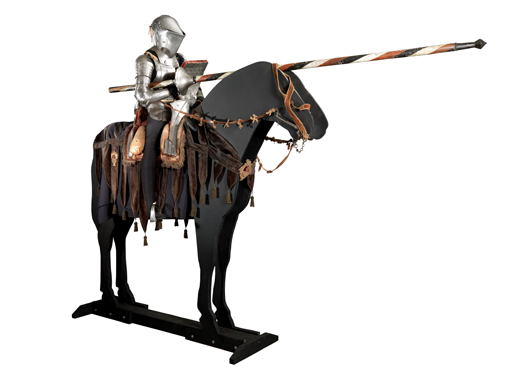 Mounted armor for the ‘Jousts Real’ in the Spanish style of circa1500-10. Mainly 19th century with some early 16th century elements. Property sold by the Art Institute of Chicago. Estimate: £15,000-20,000. Thomas Del Mar Ltd. image. 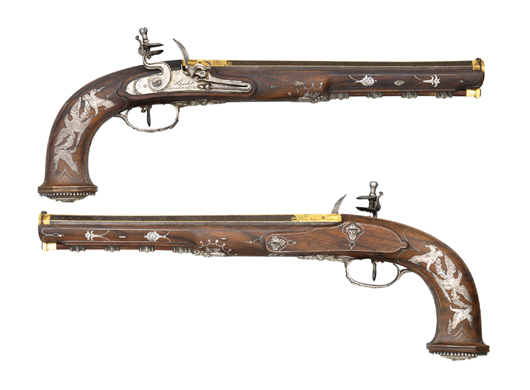 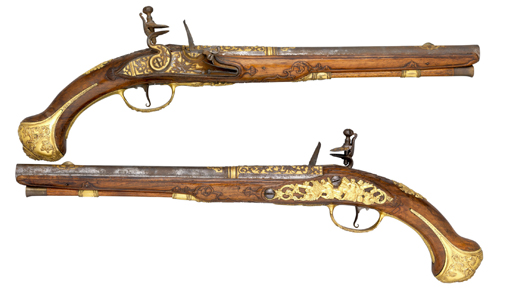 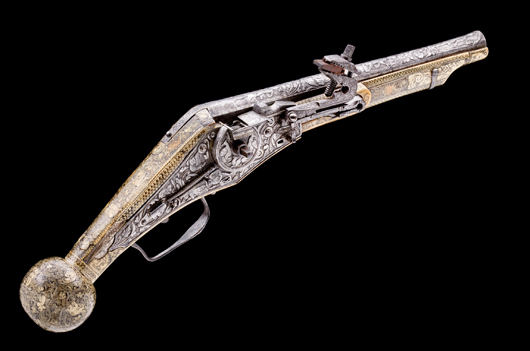