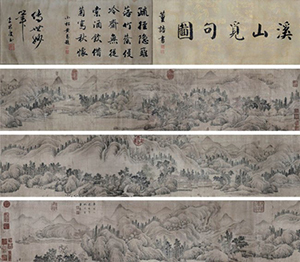 NEW YORK – Following the success of their inaugural auction in Singapore that saw more than 20 Buddhist items of worship go under the hammer along with Chinese paintings and works of art, Gianguan Auctions New York presents an equally impressive sale on Dec. 7. The upcoming auction resonates with historic Tibetan and Chinese items of devotion, scroll paintings by traditional and modern masters, Yuan, Qing and Ming porcelains and rare archaic vessels. The two-session auction begins at 10 a.m. at Gianguan Auctions, 295 Madison Ave. LiveAuctionereers.com will provide Internet live bidding.

Highlighting the sale are two magnificent gleaming Tibetan gilt bronze friezes created in the 13th-14th century to honor the god Avalokiteshvara. That they survived the destruction of tumultuous times is nothing short of amazing. Lot 260, featured on the catalog cover, depicts Avalokiteshvara in dhyanasana seated on a tiered base of mountains and waves. Lot 261 portrays Avalokiteshvara seated in dharmachakra mudra bearing a vase. Both are intricately and heavily cast. The figures and symbolic foliage in their environments are superbly molded. Coral and turquoise embellishments on each enrich their appeal. Each frieze measures about 22 inches high by 17 inches wide. They retain their original rings. Each has a presale estimate of $30,000-$50,000.

These are supported by a collection of carvings of Buddhist deities of which the top lot is a Northern Wei jade portrayal of Sakyamuni Maitreya. He is seen in abaya mudra, right hand in varda mudra, with robes falling loosely. At 17 inches tall, Lot 185 is valued at $30,000 – $50,000.

Further personal reflections of thought and faith include Lot 147, a rare Shoushan stone seal carved as an elephant standing foursquare. Atop are two Buddhist arhats holding a covered box. The seal is an excellent value at $4,000 – $8,000. Grouped at Lots 161 – 165, other Shoushan stone statuettes represent Jambhala, a Lohan taming a lion, the Guanyin, and a Taoist sage. They range in value from $4,000 – $6,000.

An ink-and-color on paper scroll painting by Gu Jianlong is yet another expression of Buddhism. Entitled Venerable Buddha, it captures the Buddha and a traveler, each with a halo, in a swirl of color. As the journeyer restrains a tiger, a cherubic figure looks on. The Qing Dynasty painting is Lot 17. It bears two artist seals and is valued at $15,000 – $20,000.

Completing the collection of devotional items is an unusual aloeswood sculpture of the Liuhai parade of toad bringing forth coin. Pungent and treasured, aloeswood is rarely found in pieces large enough to carve. Lot 160, 2 1/2 inches tall, is valued at $3,000 – $4,000.

Defying the vagaries of centuries, a small collection of archaic rarities makes an appearance at Lot 264 with a Western Zhou three-lobed bronze Ding (food vessel) on cabriole supports. Decorated with dragon and boss pattern, the body is completed by three dragon head handles with a headpiece and hook. The mottled patina with malachite encrustation is appropriate for its age. It stands 14 1/2 inches tall and carries a value of $200,000 – $300,000. The sale also includes several shang gongs (wine vessels), including Lot 259, a highly creative interpretation of a bovine figure with tongue sticking out the back. It is expected to bring $60,000 – $80,000.

Outstanding porcelains include a pair of Ming copper-red dragon bowls incised with dragons chasing pearl among clouds. Of the period, each bears the Chengua six-character mark within double squares. Lot 252 is valued at $30,000 – $50,000. A rare blue-green incised dragon plate is a masterwork of hued glazing during the Ming era. It is Lot 238, $60,000-$80,000.

The Yuan dynasty delivers a massive 20-inch-tall blue and white rouleau (rolled) vase that also defines the glazer’s art. Tones of underglaze blue give life to the figures in a landscape on the body. Phoenix handles complete the design. Lot 247 goes under the hammer at $30,000 – $50,000.

Exquisite stone carvings make up a large part of the auction. Highlights include a fine Hetian carving of Lingzhi with dragon and peacock that forms a complicated, nearly abstract presentation. The translucent stone of even white tone is perfect medium for the lingzhi, a fungus believed to promote longevity. More than a foot long, Lot 195 goes off at $40,000 – $50,000.

Session one, Paintings, is a festival of masterful works by noted artists of the Qing and Ming courts as well as such modern favorites as Li Keran, Qi Baishi, Fu Baoshi and Zhang Daqain.

An exuberant abstraction by Wu Guanzhong at Lot 16, Orioles Amidst Willow, dated 1997, is a tour de force of the ink splash technique, peppered with bold color set in the form of a traditional scroll. At $30,000 – $40,000 it could be the cornerstone of a vibrant collection.

A collection of figurative works by the self-taught Qi Baishi include the 1928 ink and color on paper Snow Travelers. A pictorial essay of two people trudging through the elements set against mountainous outcroppings, its value is $200,000 – $300,000. Lot 46, Brewing Tea, by the same artist, is a warmer depiction of a bearded elder fanning cooking flames with a palm leaf. Ink and color, again inscribed Qi Huang, it has two artist seals that add to its value of $60,000 – $80,000.

Works by the perennially popular Li Keran, whose early childhood experiences as a water buffalo shepherd informed his art, are peppered throughout the session. Lot 11, Autumn Leaves in Color, is classic in its portrayal of a laughing boy atop a running water buffalo. It is expected to fetch $40,000 – $50,000.

The sale also contains excellent holiday gift items, such as a large collection of amber and jade jewelry slated for the opening hour of session two, 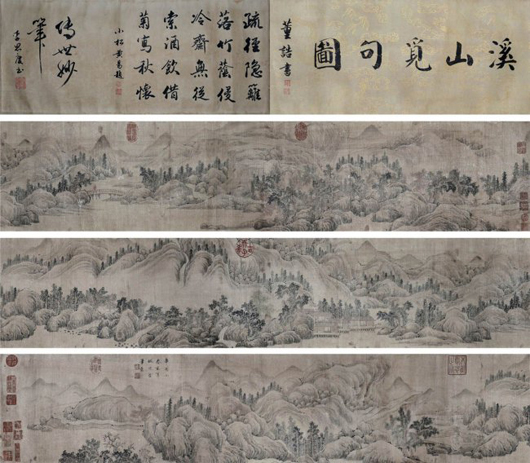 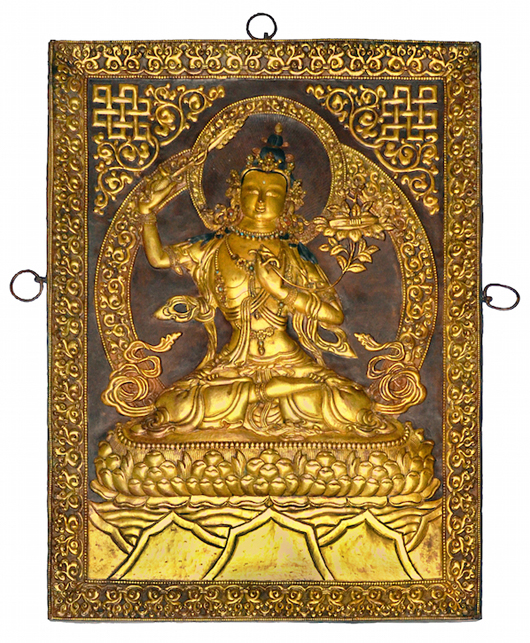 Designed in the 13th/14th century as a decoration for a large stupa, this Tibetan frieze of Avalokiteshvara in Dhyanasana is backed by a manorial and flanked by symbolic foliage, 22 7/8in. x 17in. Estimate: $30,000-$50,000. Gianguan Auctions image 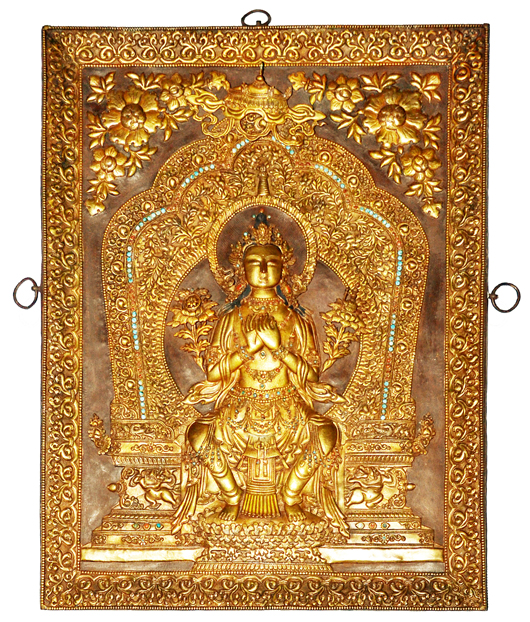 This Tibetan gilt bronze frieze with Avalokiteshvara in Dharmachakra Mudra is a 13th/14th century icon that has survived tumultuous times, 22in. x 17in. Estimate: $30,000-$50,000. Gianguan Auctions image 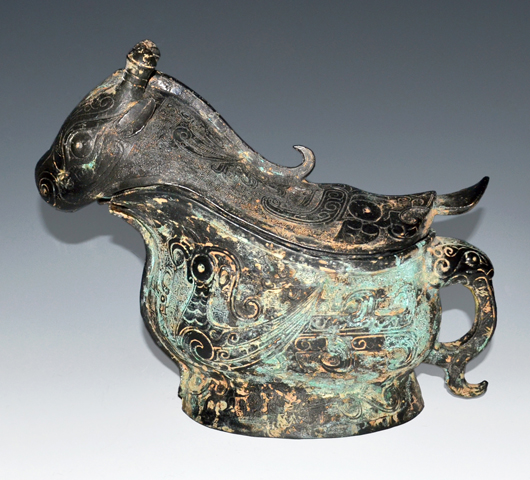 This archaic bovine form gong (wine vessel) with bulging eyes, horns and tongue emanating from the rear is of the Late Shang Dynasty and similar to one in the Shanghai Museum. Estimate: $60,000-$80,000. Gianguan Auctions image 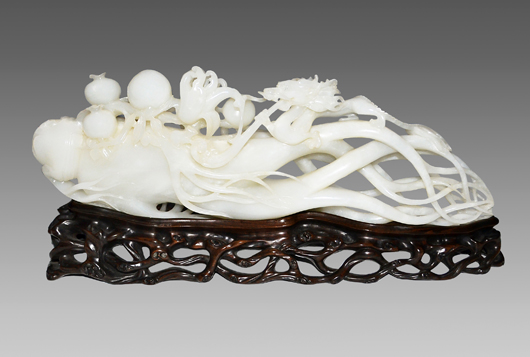 A Hetian jade carving of lingzhi with Dragon and Peach is composed of symbols of longevity. The translucent stone is of an even white tone, 15 1/2 inches long. Estimate: $40,000-$50,000. Gianguan Auctions image 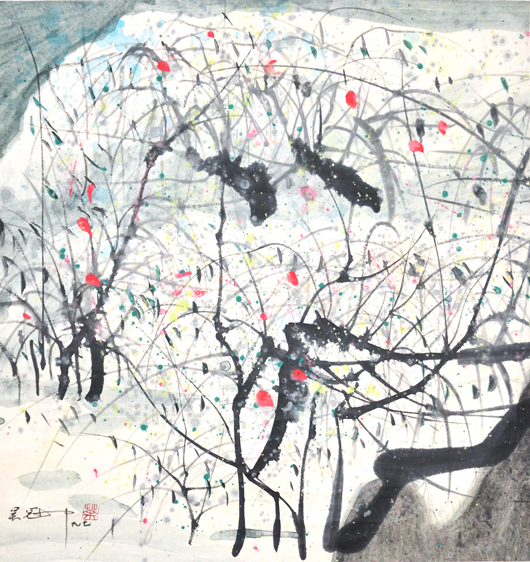