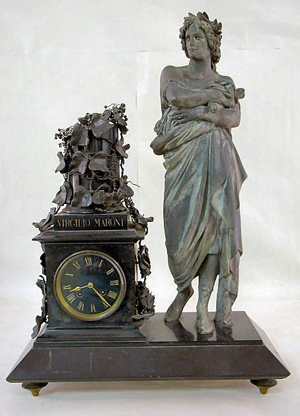 Standing 24 inches tall, this French statue clock is in running order and has a $1,000-$3,000 estimate. Image courtesy Tom Harris Auctions.

MARSHALLTOWN, Iowa – Tom Harris Auctions’ Antique and Collectible Clock Auction on Jan. 6 will feature the collection of Bill Keller, including many small, unusual clocks that he wrote about in articles for the National Association of Watch and Clock Collectors Inc. LiveAuctioneers will provide Internet live bidding.

The auction, which will begin at 10 a.m. Central, will consist of approximately 360 lots from Keller’s collection and the estates of Clyde Schultz of Iowa and Dana Zimmerli of Minnesota.

Several French figural clocks figure to be among the top lots. From the 1840s, a massive clock in bronze celebrating Industry depicts a lady holding a steamship while her other hand rests on a globe. There are floral garlands, acanthus leaves and a recumbent lion. It has a time and strike movement marked “Bamic Paris – Japy & Marseille & Regent.” While not running and in need of a pendulum, bell and back access door, this clock carries a $1, 000-$3,000 estimate.

A French statue clock featuring a classical woman wearing a drape stands 24 inches tall on a slate base. The clock has a signed Japy Freres movement no.10487 and is also marked “F. CCSSA-Paris.” The slate dial with incised Roman numerals is signed “Vergilio Maroni.” It has a $1,000-$3,000 estimate.

Another large French statue clock depicting two figures standing on a small boat in a storm is made of white metal and slate. Signed “Moreau, De & Cie Paris,” the clock has a 4-inch ivorine dial. Its estimate is $500-$2,000.

A fine walnut case, 25 1/4 inches high, highlights a Ithaca No. 10 Farmer’s Calendar Clock. Equipped with an eight-day time and strike movement, the clock is not presently in running condition. The estimate stands at $750-$2,500.

Manufactured by E.N. Welch, a J.C. Brown ripple front beehive clock features an eight-day time and gong strike. The veneered case stands 18 3/4 inches high. The clock, which is in running condition, has a $1,000-$2,500 estimate.

A calendar clock manufactured by the Southern Calendar Clock Co. of St. Louis features two 7 1/2-inch dials in a rosewood veneer case that stands 26 1/2 inches high. Its eight-day time with bell-striking movement is in running condition. It has a $500-$2,000 estimate.

Decorated with a painted portrait of George Washington and his Mount Vernon home is a Waltham Delaware banjo clock in a 42-inch-long mahogany case. It has a time only weight-driven movement and a $300-$1,000 estimate.

A French marble garniture topped by a bronze eagle with its wings spread is expected to bring as much as $1,500. Its time and bell striking movement is by Samuel Marti- Paris 1900. It stands 18 3/4 inches high by 19 inches wide.

The Keller collection features dozens of small electric clocks made from the 1930s through the 1960s. Many of these will be sold in multiple lots. 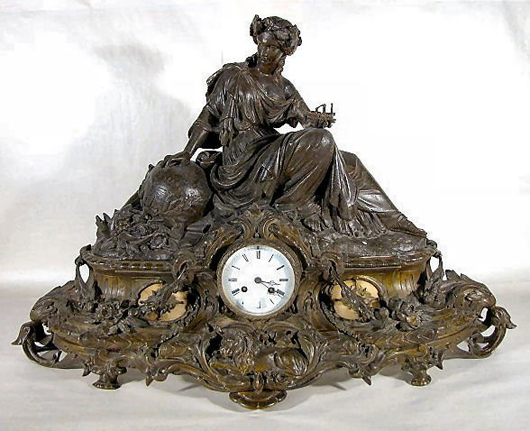 Industry is celebrated in this massive French figural clock that is 21 1/2 inches tall by 32 inches wide. Though not in running condition, this clock is expected to sell for $1,000-$3,000. Image courtesy Tom Harris Auctions. 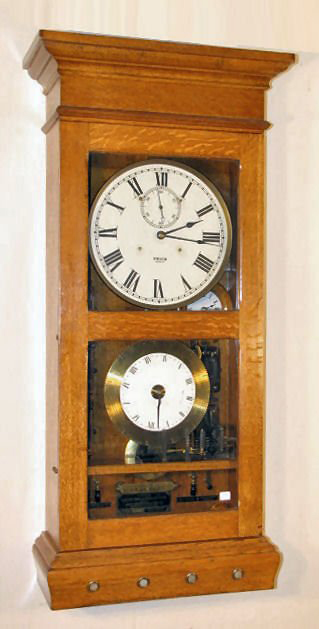 Landis Engineering Manufacturing Co. of Waynesboro, Pa., manufactured this Frick Electric Time and Program Clock in a 44-inch-tall golden oak case. It is expected to sell for as much as $2,000. Image courtesy Tom Harris Auctions. 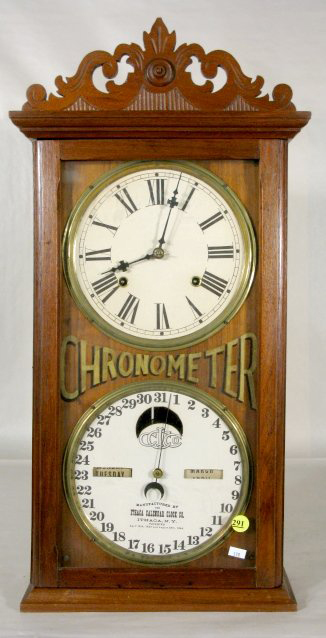 An unspecified repair will be needed to get this Ithaca No.10 Farmer’s Calendar Clock with eight-day time and strike movement running again. The 25 1/4-inch-high walnut case is in good condition. It has a $750-$2,500 estimate. Image courtesy Tom Harris Auctions. 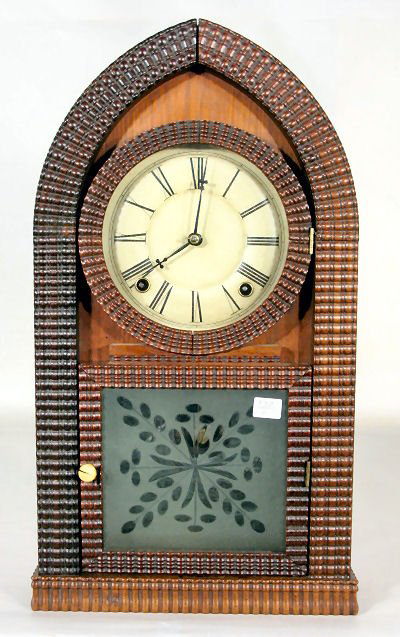 A label on the inside of this ripple-front beehive clock states: ‘Made by E.N. Welch at the Old Establishment and Late J.C. Brown.’ It stands 18 3/4 inches tall. It has a $1.,000-$2,500 estimate. Image courtesy Tom Harris Auctions.