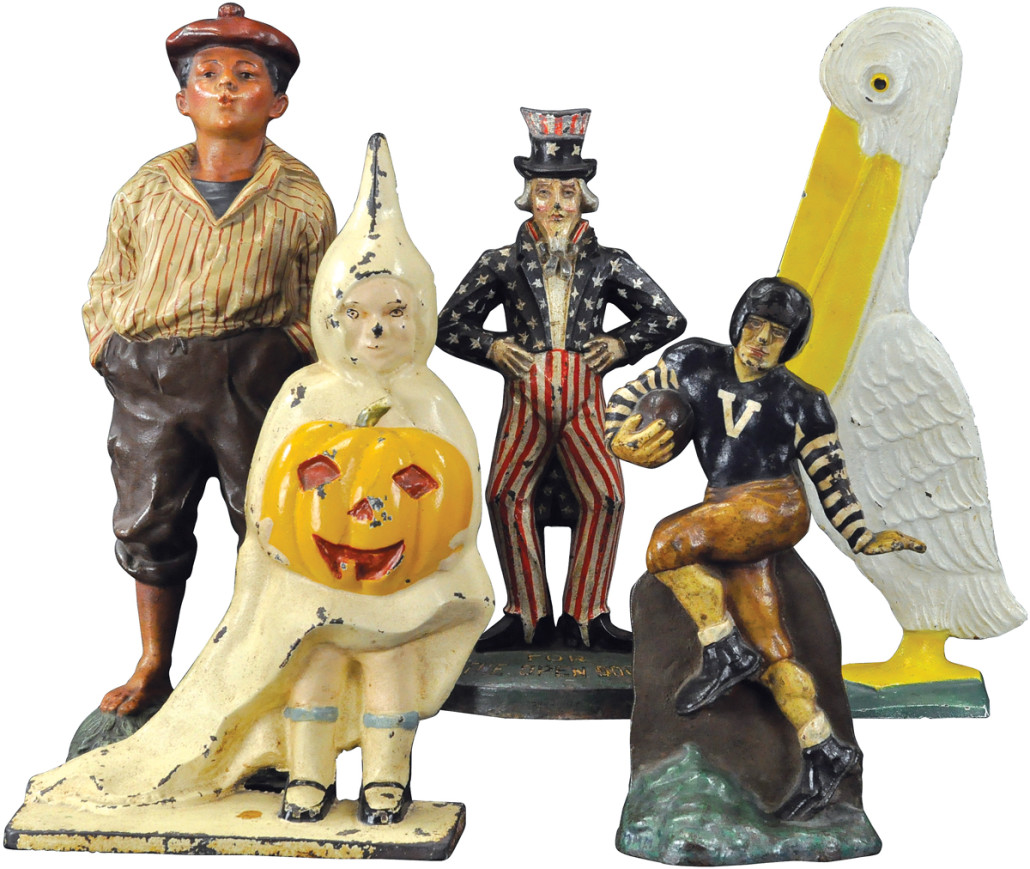 VINELAND, N.J. – In the world of antique toys, condition is king. With that in mind, Bertoia’s first auction of 2016 pays tribute to the most outstanding examples of toys from all subcategories, as well as pristine banks, trains and doorstops. The New Jersey company’s Saturday, March 12 Select Toys Auction will showcase exquisite pieces from many advanced collections, including that of respected Pennsylvania collector Bob Brady.

“Over the years, Bob Brady has set a very high bar in terms of condition,” said Bertoia Auctions associate Rich Bertoia. “For a toy or bank even to be considered for his collection, it had to be at least near-mint, and that’s especially challenging when you’re talking about cast iron.”

The sale will begin with a magnificent array of cast-iron vehicles from Brady’s collection. Toy enthusiasts will be able to feast on Dent factory samples and a parade of coveted Hubley Royal Circus Wagons, such as the Calliope, Trapeze, Farmer’s Van, a large-size Bandwagon, and many animal cages.

Within the high-flying squadron of cast-iron aeronautical toys exiting the Brady hangar are multiple Spirit of St. Louis “Lindys,” a Sirius, a near-mint Vindex Lockheed airplane, and both large and small variations of Junkers planes and DO-X prop-mounted motor seaplanes.

Next to cross the auction block will be cast-iron still banks. Among the entries with Brady provenance are two showstoppers: the only known three-wheel variant of an Elephant with Chariot, and a very rare King Midas (shown below). A fantastic lineup of spelter banks from a Midwestern collection features a virtual menagerie of animals – dogs, cats, birds, pigs and an extremely rare pheasant bust – as well as a clown, chariot, coach and footed stein. 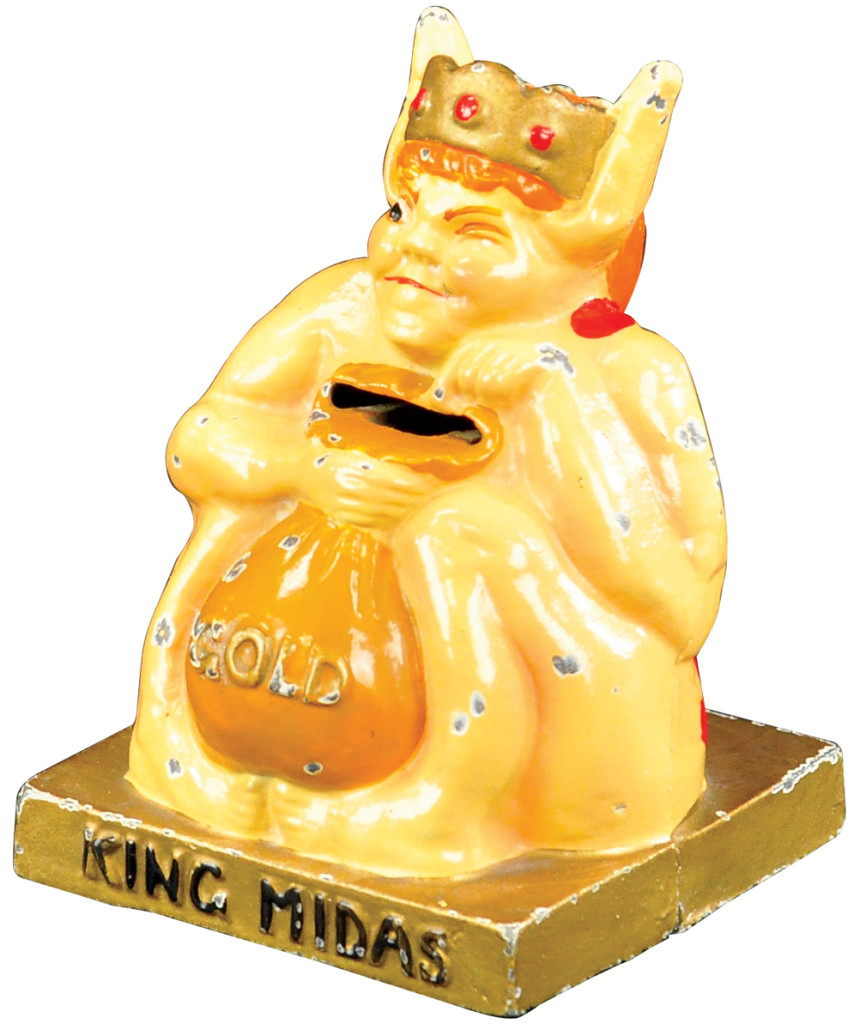 A fleet of 75+ pressed-steel trucks from the Jay Schoedinger collection runs the high-end gamut of brands from Buddy ‘L’ and Keystone to Sturditoy and Structo.

“Displayed on our shelf-lined wall, the Schoedinger collection is quite a spectacular sight to behold,” said Bertoia. “Jay has been a loyal Bertoia buyer for many years, and he always bought very astutely.”

A superb Buddy ‘L’ tugboat and many superior-quality pressed-steel fire, service and delivery trucks dominate the grouping. There are also several terrific trains from the Schoedinger collection that were purchased at the 2001 Richard Keats Buddy ‘L’ archive auction, including a rare display locomotive and tender in copper flashing. 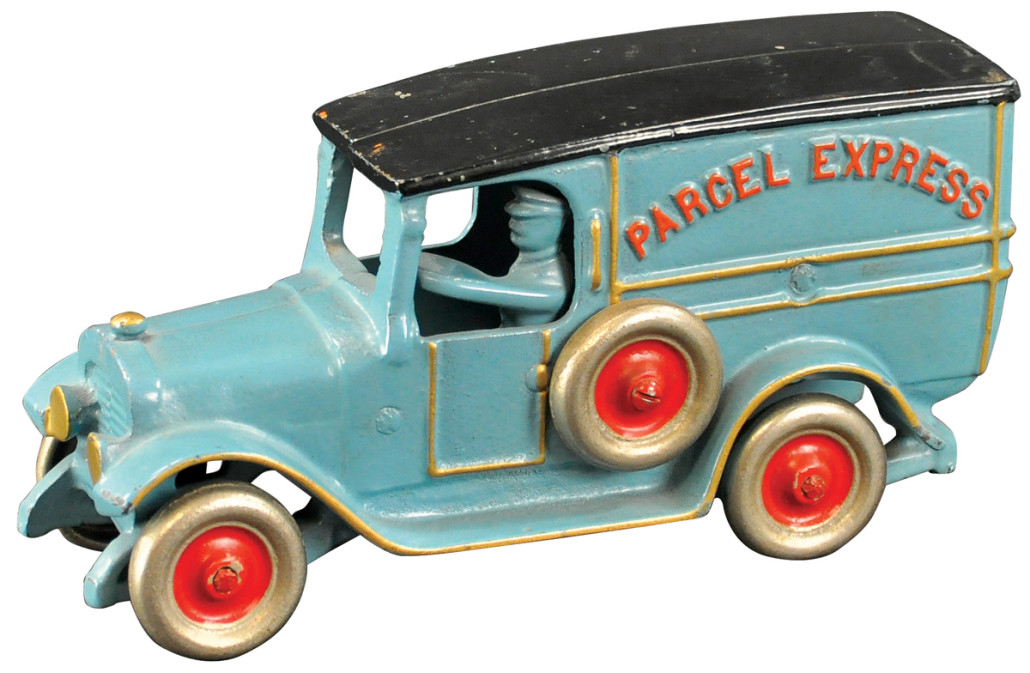 Next up will be an enviable array of American Flyer wide-gauge trains from the Jim Ferguson estate collection. “Jim was fanatical about condition,” Bertoia said. “One look and collectors will know immediately just how fanatical. The trains are colorful, bright and in gorgeous condition. Around 35 of them are boxed, and each of those boxes was hand-wrapped and stored away for safekeeping. The care he took with those trains and boxes was a gift to the future owners, because they really are exceptional.” In addition, there are several American Flyer O gauge trains, mostly boxed.

Cast-iron doorstop collectors will have the unique opportunity to bid on the most highly prized pieces from the personal collection of doorstop expert, reference book author and Bertoia Auctions’ owner Jeanne Bertoia. (See image at top)

“These are the last – and rarest – doorstops that remained in my private collection. Many are the actual ones that appeared in my doorstop book published in 1985,” Bertoia said. “They are truly the finest doorstops any collector could ever hope to find.”

Some of the doorstops were acquired 30-35 years ago, while others were the optimal examples that resulted from multiple upgrades. The collection is topped by a spectacular Halloween Girl and an equally stunning Uncle Sam. A full complement of Bradley & Hubbard rarities is led by a Whistling Jim, Turkey, Rabbit, Squirrel and Owl. The manufacturer Fish is represented by both sizes of the Footman, plus Charleston Dancers, Tiger, and Messenger Boy.

A Football Player with a “V” on the front of his blue and tan uniform is of unknown manufacture and highly desirable. Productions from the Spencer Cast Iron Foundry of Guilford, Connecticut add to the animal-doorstop parade with an elegant Swan, Rooster, Rabbit, and Bertoia’s favorite, a wonderful Pelican with molded “feathers.” A black “Caddy” doorstop is the only known example of its type; all others in existence have a white face. In addition, there are many pristine to mint-condition floral and storybook-theme doorstops; plus the signature piece: the Clown shown on the front cover of Bertoia’s book.

A seldom-seen piece is the cast-iron American toy known as Alphabet Man or Yankee Schoolmaster. “It was meant to be an educational toy. When the lever is activated, the man points to letters of the alphabet on his chest,” Rich Bertoia said. “Its molding effects are extraordinary and it has an appealing folky look. Only about five examples of this toy are known to have survived.” 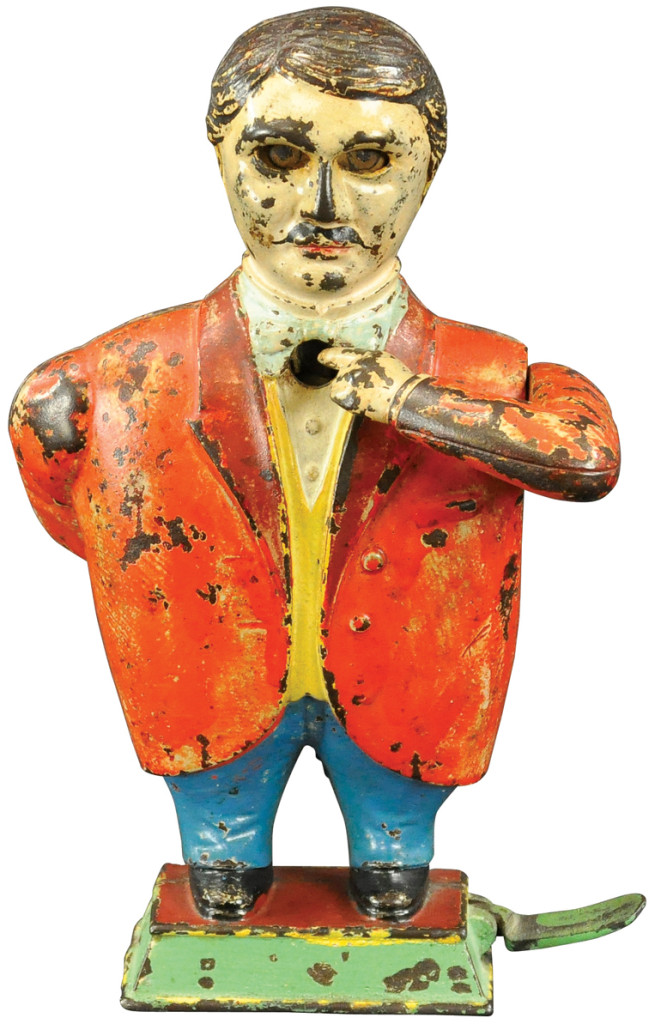 The final section of the sale is devoted to cast-iron mechanical banks from the Clive Devenish collection, including The Giant, a Motor bank, a particularly nice Boy Scout, and two variations of the Teddy Roosevelt bank, one with a brown trunk; the other with a gray trunk. In addition, there are mechanical banks from other advanced collections, among them a Panorama, Jonah and the Whale, Santa at Chimney, Professor Pug Frog, and a Mule Entering Barn with the roof painted an unusual variant color of orange. 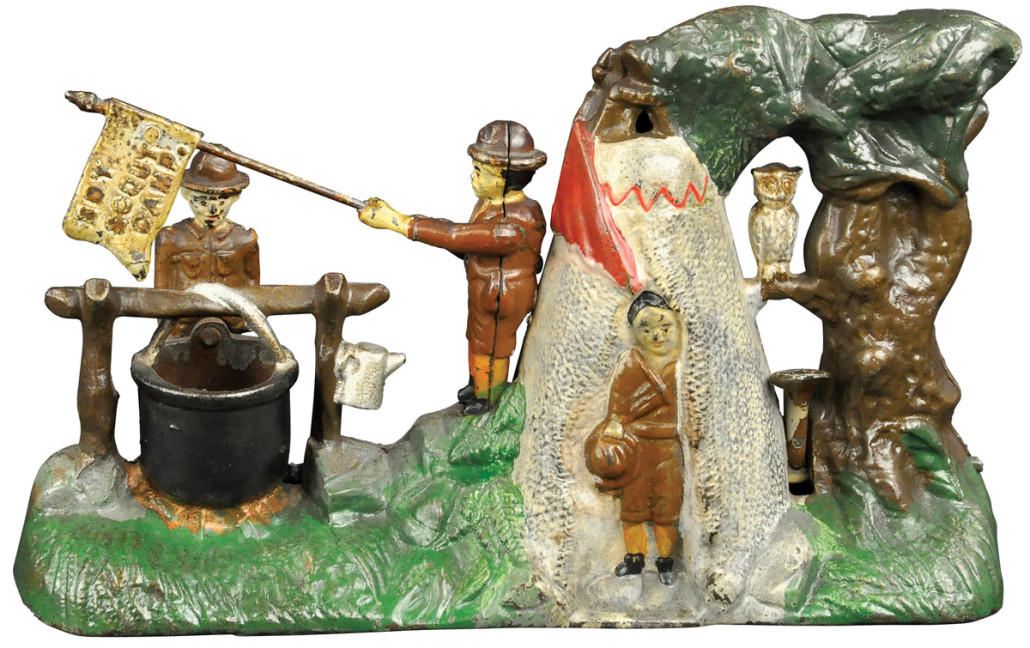 Bertoia’s Select Toys Auction will be held on Saturday, March 12, 2016 at Bertoia Auctions’ gallery, 2141 DeMarco Dr., Vineland, NJ 08360. Start time is 10 a.m. Eastern. For additional information on any item in the sale, contact Bertoia Auctions by calling 856-692-1881 or emailing toys@bertoiaauctions.com.

Geo. Washington second only to Impressionist painting at Keno auction