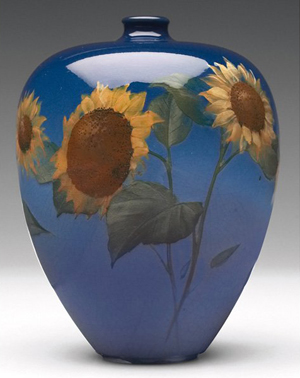 Rookwood’s impressed logo, date, shape number and artist Kataro Shirayamadani’s signature are on the bottom of this 5 1/2-inch vase. It has a $2,000-$3,000 estimate. Image courtesy of Treadway Gallery.

CINCINNATI – Climate change isn’t always about the weather. The climate of the antique market is constantly changing, and Don Treadway of Treadway Gallery is attempting to adjust the thermostat to keep his customers comfortable. Results will be gauged Saturday, June 5, when Treadway conducts his annual Decorative Arts auction at the historic Cincinnati Museum Center at Union Terminal.

This major sale, which begins at 10 a.m. Central, includes more than 500 lots, slimmed down a bit from previous Treadway auctions. LiveAuctioneers will provide Internet live bidding.

“It’s sort of a sale for the times,” said Treadway, describing the market for antiques as “dicey.”

“Great things are still in demand, the middle is difficult,” said Treadway. “Acknowledging this, we have been particularly stingy with reserves.”

Treadway said saw at his recent auction in Chicago a willingness among buyers to pay fair prices for good items. “So don’t give me something encumbered with a reserve,” he said.

Reflecting the summertime feel of the auction are two fine Rookwood vases that will sell in the first half hour. A graceful bulbous shape vase, 5 1/2 inches high by 4 inches wide, dated 1894 and decorated with sunflowers by Kataro Shirayamadani has a $2,000-$3,000 estimate. A 15-inch-tall Rookwood vase with a Vellum glaze and a finely painted landscape of birch trees by a lake shore, done by Lenore Asbury in 1918, is expected to sell for $3,500-$4,500. A Rookwood Vellum plaque picturing a Venetian boat scene by Ed Diers has a $15,000-$20,000 estimate.

Other Rookwood artists whose works will be available at the auction are E.T. Hurley, Sallie Coyne, J.D. Wareham, Carl Schmidt and Lorinda Epply.

In addition to the featured Rookwood pottery, Treadway will offer Rozane, Weller, Owens, Roseville, with the emphasis on Ohio pottery.

Buyers will find numerous examples of Arts and Crafts pottery such as Van Briggle, Teco, Wheatley, Fulper, Dedham, several pieces of Newcomb and metalwork by Dirk Van Erp. There is also a collection of WMF metalwork including several rare examples.

A selection of graphic works by Leon Dolice and Gustav Klimt are also listed along with a fine Pedro Lemos pastel. Other artists include John Weis, Victor Casenelli, William Meuttman and Werner Drewes There are several fine Asian vases.

As always, everything is guaranteed, noted Treadway. 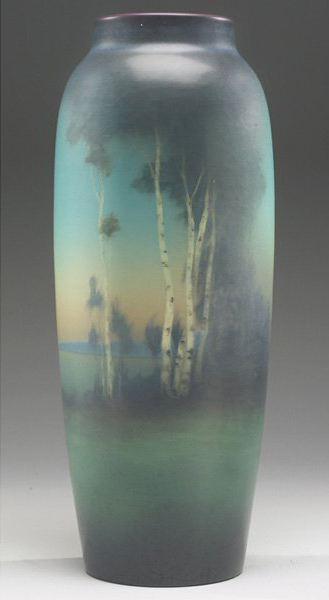 A finely painted landscape by Lenore Asbury is covered with a Vellum glaze. The 15-inch Rookwood vase, which is dated 1918, has a $3,500-$4,500 estimate. Image courtesy of Treadway Gallery. 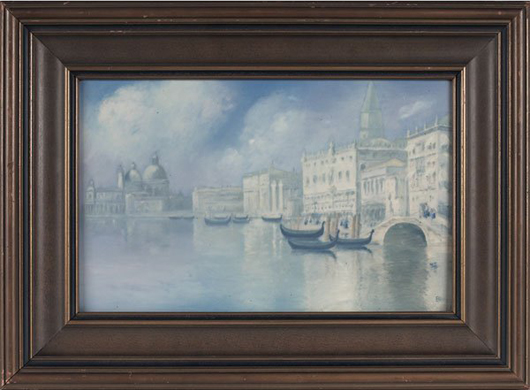 ‘On the Riva’ is the title of this Venetian scene painted on a Rookwood Vellum glaze plaque by Ed Diers. It is 20 1/2 inches by 15 inches, including frame. The estimate is $15,000-$20,000. Image courtesy of Treadway Gallery. 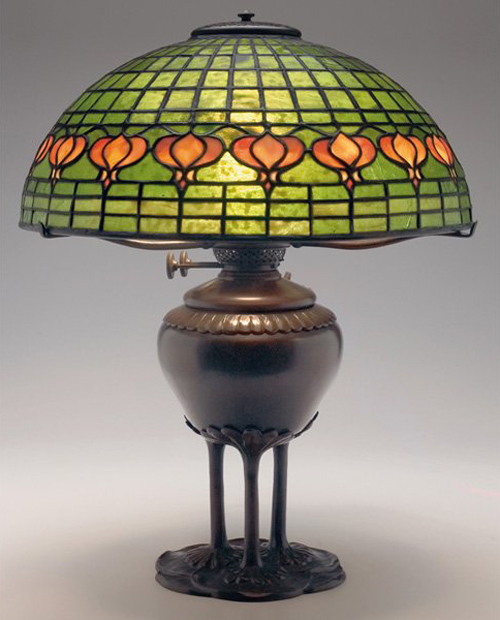 The bronze base of this Tiffany Studios lamp is an unusual form. Topped with a leaded glass shade in the Pomegranate pattern, the lamp is estimated at $15,000-$20,000. Image courtesy of Treadway Gallery. 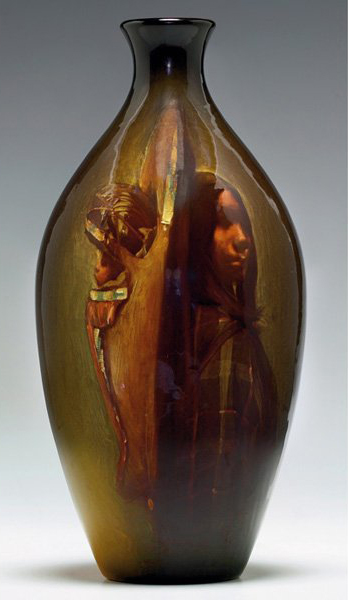 Rookwood artist Grace Young titled this portrait ‘Ute Squaw + Papoose,’ which she painted on an 11-inch vase dated 1898. This classic example of Rookwood Standard glaze has a $6,000-$8,000 estimate. Image courtesy of Treadway Gallery.