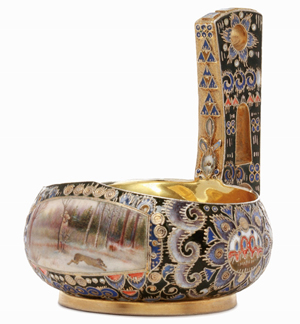 An exceptional Faberge pictorial kovsh by Feodor Ruckert will be offered at Jackson’s sale of World Treasures, June 11 and 12. Jackson’s image.

CEDAR FALLS, Iowa – Treasure hunters need look no further than to Jackson’s International, who is hosting their summer World Treasures auction on June 11 and 12. Aptly named, this auction features a cavalcade of items from many different cultures, with an emphasis on Imperial Russian works. These treasures are drawn from a variety of estates and private collections from throughout the United States and Europe, with over 1,000 lots being sold in the two-day time frame. LiveAuctioneers.com will provide Internet live bidding

This sale features an amazing sampling of Imperial Russian works with over 250 lots including Faberge, icons, silver and enamel items, as well as a fantastic and important collection of Russian lacquerware. Works by Faberge include an exceptional silver-gilt and shaded enamel pictorial kovsh by Feodor Ruckert, an impressive silver four-piece tea and coffee service, a silver-gilt and guilloche enamel frame by Farbege workmaster Michael Perchin, a large silver mounted and cut crystal bowl and many other items.

Over 85 Russian icons, circa 1500-1910, will be offered on this sale including many fine and hard to find subjects and examples. A fabulous enameled Feodor Ruckert icon of the Kazan Mother of God will be offered as well as a rare presentation icon depicting the Chronicler Saint Nestor of Kiev as presented by Metropolitan Ioannkiy of Kiev, dated 1896 and possibly gifted by the Imperial family.

There is also an important collection of Russian lacquerware to be offered. Consisting of over 100 examples, the collection features cigar humidors, cigarette boxes, photo albums, tea caddies, card cases, snuff boxes, trays, plates and exceptional Old Believer Easter eggs. With the exception of two of the lots, all of the Russian lacquer on this sale was acquired by the consignor from the noted exhibition, “Russian Lacquer Art From Two Centuries” at the Museum For Lacquer Art in Münster, Germany from May 11, 1995 through Jan. 4, 1996. All of the items were published and many were illustrated in the extensive 120-page color exhibition catalog. The art of exquisite painting on lacquerware is known to many countries—from early Chinese examples dating to the 16th century all the way through Continental examples from the 18th century. However, no miniature lacquer art has received the attention or rose to such heights as that of the works produced in Russia, with each item representing an intense period of labor. Finding a collection such of this, with early examples from all of the well-known villages (Fedoskino, Palekh, Kholui and Mstera) truly provides a unique opportunity to imbibe in the rich history surrounding these wonderful objets d’art.

Russian artwork will also be offered including original works by Ivan Bilibin, Aleskei Isupov, Boris Zvorykin, Alexi Remizov and others including an interesting collection of watercolors by Russian artist Vladimir Fedorovich Kadulin (Russian/American 1883 – after 1950), a talented and wildly successful satirical artist whose fame spanned just a little over 20 years and is known primarily today through the over 200 color postcard illustrations attributed to him (sometimes signed in transparent pseudonyms) covering a vast array of subjects. His work pushed the envelope in the realm of political satire, while still resonating with those who grew up in the Soviet system. His work reflected the real attitude of many Russians, which was violently suppressed by the Soviet government and subsequently caused him to flee to New York where he continued to paint, although he never achieved the success he had in his native homeland.

Russian treasures are only one small part of this fantastic sale. Also included are over 250 oil paintings, by listed American and European artists, including a wonderful collection of European genre paintings, circa 1875-1920, covering a vast majority of subjects, including a Cesar Pattein (1850-1931) oil on canvas of Apple Pickers.

American art is also well represented, including a fresh to the market painting by Frederick Carl Frieseke (1874-1939) of The Pink Parasol. This painting will be included in the forthcoming catalogue raisonne of Frieseke’s work being compiled by Nicholas Kilmer, the artist’s grandson and sponsored by Hollis Taggart Galleries, New York. The sale will also feature works by Fern Isabel Kuns Coppedge, Louis Aston Knight, Walter Palmer, Alfred Herber Hutty and many others. Another interesting offering from the realm of American art is a large cache of photographic negatives by famous American photographer, Arnold Genthe. The 473 negatives consist mostly of period dancers modeling in the nude in mixed indoor studio settings and include many named models and notable individuals.

With over 100 fine art bronzes, there is certainly a find for most any treasure hunter, including a beautiful large gilt bronze lamp by French artist Raoul F. Larche of Loïe Fuller, circa 1910. There is also a good deal of European works on this sale, including carved polychrome statuary and gilt bronze ecclesiastical items including a gorgeous oil on canvas by German artist Franz Ittenbach (German 1813-1879) depicting The Madonna and Child in Clouds Above a Small Village.

There are over 50 pieces of 17th-19th century period furnishings on this sale, including late Renaissance, William and Mary, Georgian and early American, the most noteworthy being an impressive French Louis XVI-style gilt bronze mineralogy cabinet, after the original by Swiss cabinet maker, George Haupt.

The sale has more than 40 pieces of art glass to choose from including works by Daum, Galle, Loetz, Lalique, St. Louis and Baccarat. There is also an impressive collection of Viennese enameled silver, bronze and jeweled objects of virtue, including a cornucopia horn (possibly the work of Hermann Bohm) and a scenic charger in the manner of Herman Ratzerdorfer, among others.

A fine collection of English, European and American porcelain will also be offered, including a dozen KPM plaques, with one example being a massive (21 3/4 inches by 14 3/4 inches) artist- signed plaque depicting Judith. Also, over 60 pieces of Meissen including figures and cabinet plates, impressive Sevres style urns, American Belleek and Staffordshire. Also, an exceptional group of American and European works in sterling silver will be offered. Decorative arts by E.F. Caldwell and Tiffany will be sold, including a fine L.C. Tiffany “Red Poppies” and dore bronze table lamp from the early 20th century.

Asian treasures will also be offered in this sale, including carved jades such as a carved white jade brush pot and cover, gilt bronzes, cloisonné pieces, porcelain and ivory. An original painting by Vietnamese artist, Le Pho (1907-2001) depicting The Two Florists and measuring 36 inches by 29 inches will be offered.

An impressive Mughal jewel encrusted gold mounted ivory dagger, from the 19th century, will also be offered. A small sampling of Sino-Tibetan figures will also be sold, including a large and fine gilt bronze figure of Avalokitesvara.

All items may also be viewed in their entirety on Jackson’s website. To order a full-color 300 page catalog or get assistance in placing a bid, call 800-665-6743 or visit Jackson’s website at www.jacksonsauction.com.

View the fully illustrated catalog and sign up to bid absentee or live via the Internet at LiveAuctioneers.com. 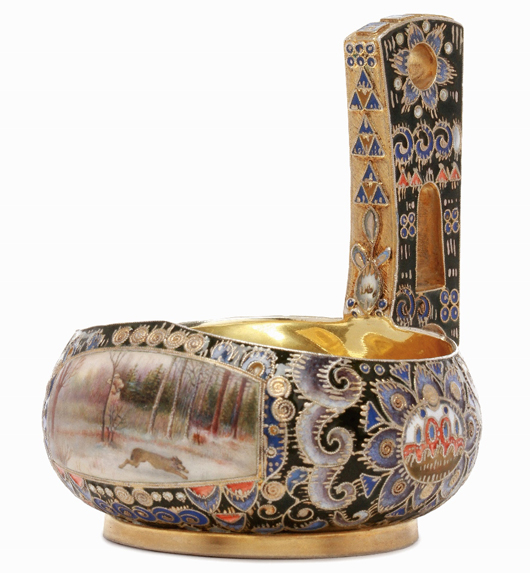 An exceptional Faberge pictorial kovsh by Feodor Ruckert will be offered at Jackson’s sale of World Treasures, June 11 and 12. Jackson’s image. 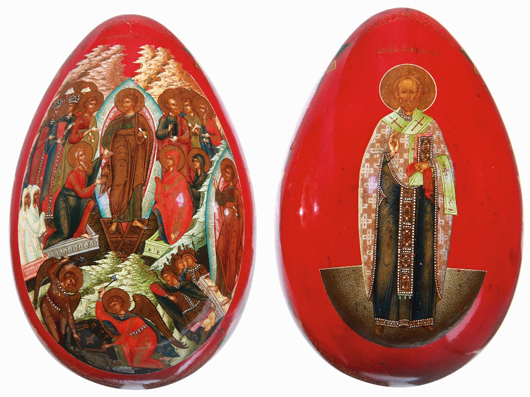 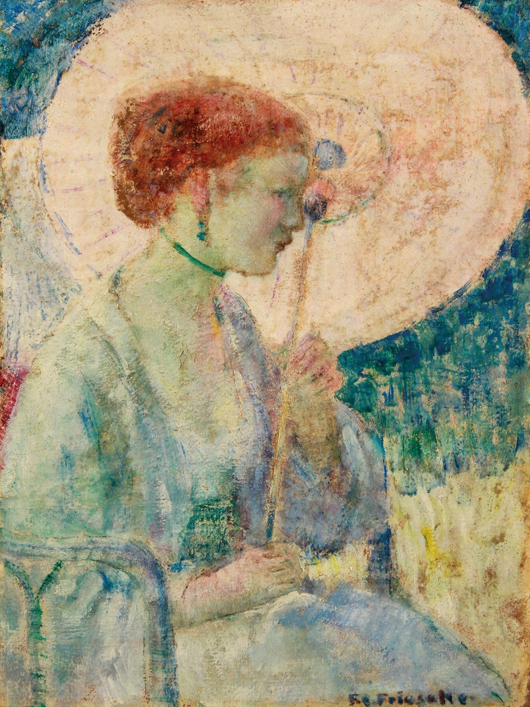 A fresh to the market painting by Frederick Carl Frieseke of ‘The Pink Parasol’ will be sold at Jackson’ sale of World Treasures. Jackson’s image. 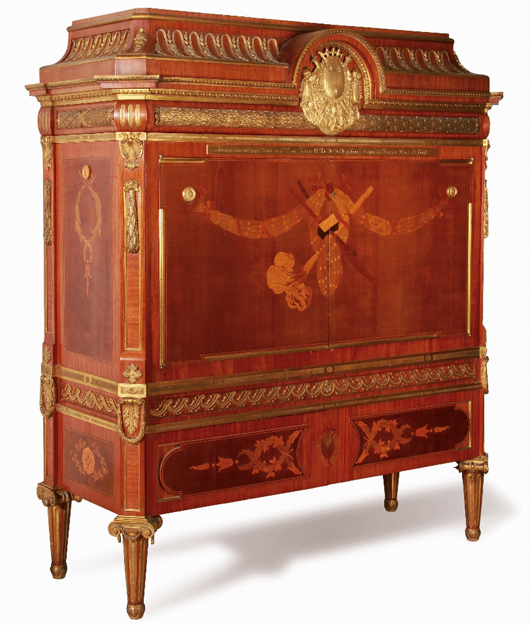 An impressive Louis XVI-style mineralogical cabinet after the original by George Haupt will be offered at Jackson’s sale of World Treasures. Jackson’s image. 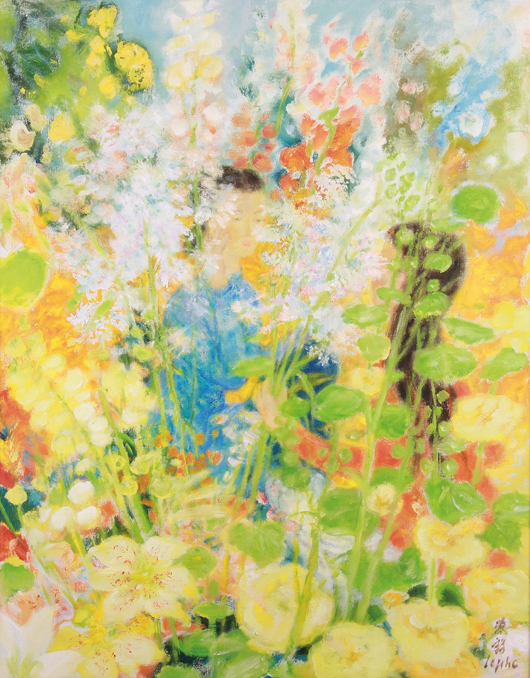 An oil on canvas painting by Vietnamese artist Le Pho of ‘The Two Florists’ will be offered at Jackson’s. Jackson’s image.