SPRINGFIELD, Mass. – Grey Flannel Auctions will tip off the live session of the third annual Basketball Hall of Fame Induction Auction at noon Sept. 6 with an all-star lineup of vintage uniforms and related collectibles befitting this premier event.

The Naismith Memorial Basketball Hall of Fame will conduct its induction ceremonies the previous evening. Among the Hall of Fame inductees for 2008 are former NBA greats Patrick Ewing, Adrian Dantley and Hakeem Olajuwon.

“This is really the only pure basketball auction in the trade. There is no questions the items in this auction are the best yet,” said Richard Russek, president of Grey Flannel Auctions.

With the Boston Celtics’ return to greatness as NBA champions in 2008, it’s timely that the Hall of Fame Induction Auction is laced with memorabilia from this storied franchise.

Lot 1 will be a Bob Cousy Boston Celtics game-used autographed uniform from the early 1960s. Cousy, the game’s preeminent playmaking guard was the NBA’s Most Valuable Player for 1957, the season he led the Celtics to their first world’s championship. The home white jersey has green lettering emblazoned “CELTICS” across the chest and Cousy’s number 14 on the front and back and comes with the matching shorts. As scarce as the Cousy uniform is, it may not be the top lot of the auction.

That distinction will probably go to a Bill Russell Boston Celtics game-used home jersey from the mid 1960s. Russell, a 6-10 center, was the dominant big man the Boston Celtics needed to power the team to 11 NBA championships in 13 seasons.

“It’s only the second game-used jersey that is actually autographed by Bill Russell,” said Michael Russek, director of operations at Grey Flannel Auctions. Preliminary bidding has already pushed the Russell jersey well beyond the $25,000 reserve, he said.

Unlike today when NBA players sometimes wear a new uniform every game, in the league’s early years in 1950s and ’60s players were issued no more than four uniforms per season – two for home games, two of a different color for the road.

“You have to remember the old days. The historic stuff is scarce,” said Richard Russek, who advises serious collectors to strive for the early uniforms.

“People collect the top 50 players’ game-used stuff and there are a few players who are next to impossible to get. One is Bill Sharman, and we have a fleece warm-up jacket that is just unbelievable.”

One of the greatest shooters of his era, Sharman starred with Cousy and Russell on Boston’s first four NBA championship teams. The white fleece warm-up has “CELTICS” across the front in green on yellow tackle twill with a matching shamrock logo applied both half sleeves. On the back is a green nameplate with “SHARMAN” in yellow tackle twill. This scarce circa 1960 warm-up has a reserve of $5,000.

Yet another great jersey is a circa 1972 Los Angeles Lakers No. 13 game-worn and autographed by Wilt Chamberlain. Seven-foot-tall “Wilt the Stilt” led the Lakers to NBA championships in 1967 and 1972 and was the league’s MVP four times. Chamberlain, who died in 1999, still holds the record for most points scored in an NBA game: 100.

“The Chamberlain jersey is a great piece. It’s a road jersey, and the purple is a little less scarce than the home, but it’s still a great piece,” said Michael Russek. It has a $10,000 reserve. 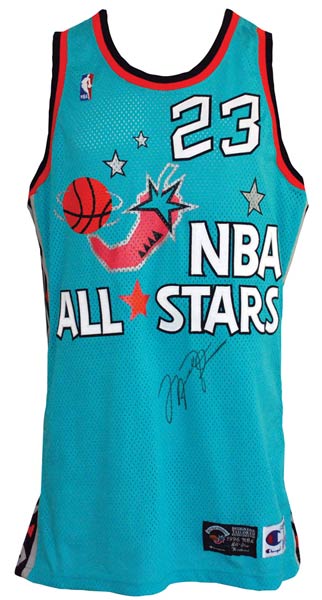 Though three decades later, a circa 1983 Michael Jordan North Carolina game-used road jersey is a slam dunk by any standard. Jordan make the game-winning jump shot for the Tar Heels in the 1982 NCAA championship against Georgetown before going on to win six NBA championships with the Chicago Bulls in the 1990s. The light blue Medalist Sand-Knit jersey, which has “NORTH CAROLINA” and “23” on the front and Jordan’s last name and number on the back in white tackle twill, carries a $25,000 reserve.

In addition to uniforms and jackets the auction will include autographed basketballs, sneakers, and NBA and ABA championship rings.

Grey Flannel Auctions, based in Westharnpton Beach, N.Y., has maintained a long association with the Basketball Hall of Fame, having appraised the organization’s museum collection of uniforms for the past 20 years.

“We certainly have the market in basketball because of our knowledge and reputation and working all these years with the Basketball Hall of Fame,” said Richard Russek. 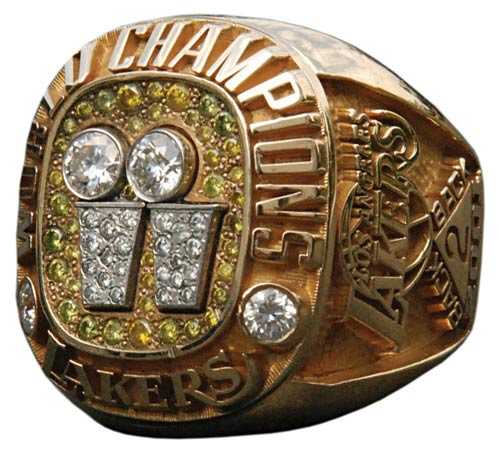