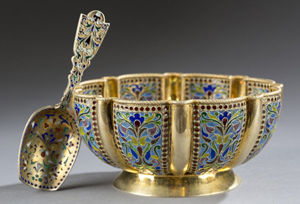 FALLS CHURCH, Va. – A letter and personal items that Confederate General Robert E. Lee gifted to a Baltimore children’s orphanage in January of 1867 for fundraising purposes is headed to auction on January 18th at Quinn’s Auction Galleries in Falls Church, Virginia. The hand-written letter, presented together with Lee’s penknife, a lock of his hair, and a Baltimore Sun newspaper article about the mementos, has been on loan to Arlington House, the Robert E. Lee Memorial at Arlington National Cemetery, for the past 18 years.

Never one to refuse a charitable request, Lee wrote in the letter to the orphanage: “Your generous efforts to relieve the wants of the infant orphans will I am sure be successful, for a cause so benevolent cannot fail to receive support in a city so distinguished for its charity and liberality as Baltimore.”

In an additional note accompanying the donated items, Lee writes, “I must apologize for the condition of this knife by stating that it was my companion during the war, REL.”

After the Civil War, Lee remained in high regard throughout the country and was frequently called upon to provide personal articles and autographs for benevolent organizations. It is rare, however, for any such items to appear at auction.

“The opportunity for someone to own a knife that General Lee carried during the Civil War is not something that happens every day,” said Quinn’s Vice President Matthew Quinn. In fact, the historical items in Lot 172 comprise an absolutely unique archive.

“This remarkable group of mementos has been a Virginia treasure for nearly 150 years, and it has been available for the public to enjoy for almost two decades,” Quinn said. “The family that loaned them to Arlington House has hopes that perhaps a philanthropist will come forward and purchase the archive to return to the Lee memorial, as their current position leaves them no choice but to sell it. The National Park Service, which maintains Arlington House, does not have the funds to purchase the items themselves.” The archive carries an auction estimate of $20,000-$30,000.

The sale will also feature estate items from the Greater Washington, D.C. region, including fine Chinese and Japanese art, English and European porcelain, Persian carpets and antique furnishings. Internet live bidding will be available through LiveAuctioneers.

Among the top highlights is an intricately carved Late Qing Dynasty white jadeite flower-form water coupe on carved-wood stand. This head-turner has a presale estimate of $6,000-$8,000.

An outstanding selection of Russian enameled pieces includes a circa-1910 Ivan P. Khlebnikov silver gilt and plique-a-jour eight-lobe bowl with tea caddy spoon, $6,000-$8,000; a circa-1896 vodka cup by the same designer, $2,000-$3,000; and a circa 1896-1908 Maria Semenova gilt silver kovsh with spoon, $4,000-$5,000. “Each is a masterwork that exhibits an extraordinary level of artistry,” Quinn observed. Also to be auctioned is a collection of Russian and Soviet-bloc posters.

Many superb paintings and other artworks are entered in the sale, including several coveted Japanese woodblock prints with extremely affordable estimates. For example, a strikingly beautiful Kawase Hasui (Japanese, 1883-1957) print titled “Saisho Temple, Hirosaki,” from a 1936 Watanabe edition of scenic views of Japan, is modestly estimated at $200-$400.

Sixteen pieces of Lalique will be offered, including a circa-1925 frosted-glass “Thais” statuette engraved “R. Lalique France N:834.” Complete with a lighted zebrawood base, it is offered with a $4,000-$6,000 estimate.

The January 18 auction also features Part II of the late Speaker of the House The Honorable Thomas S. “Tom” Foley and Heather Strachan Foley Collection. World travelers who appreciated many cultures, the Foleys astutely acquired fine and decorative art and antiques for more than 40 years. The couple’s eclectic interests are seen in the variety of items being sold by Quinn’s. An example of the mid-century pieces they acquired is a sleek Knoll Barcelona daybed designed by Mies van der Rohe, which could realize $1,500-$2,500. 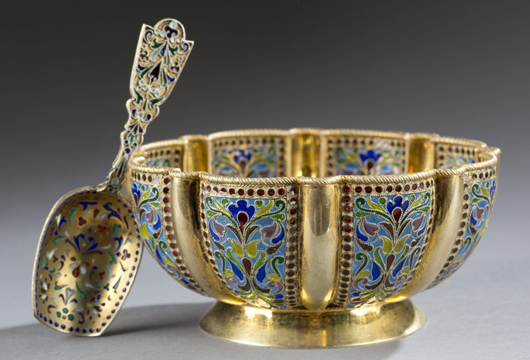 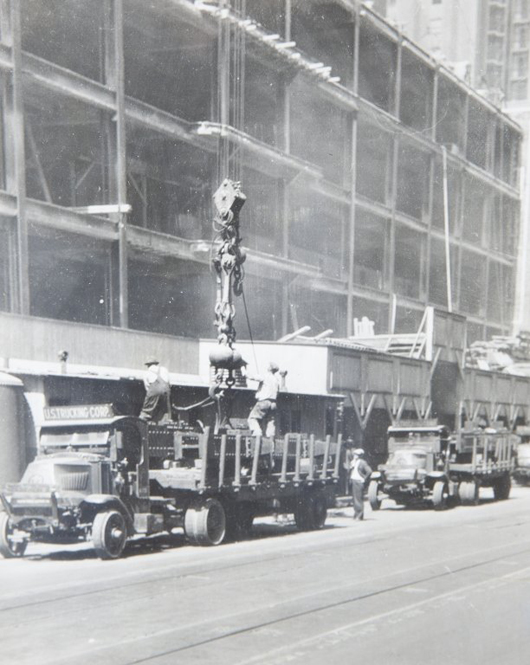 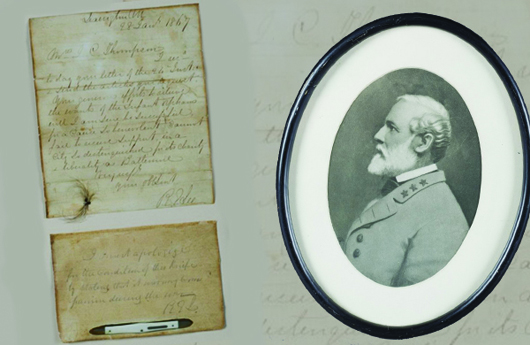 Archive of Robert E. Lee items including a letter he wrote in 1867 to a Baltimore orphanage, with his donated penknife carried during the Civil War and a lock of his hair. On display for 18 years at Arlington House. Estimate $20,000-$30,000. Quinn’s Auction Galleries image. 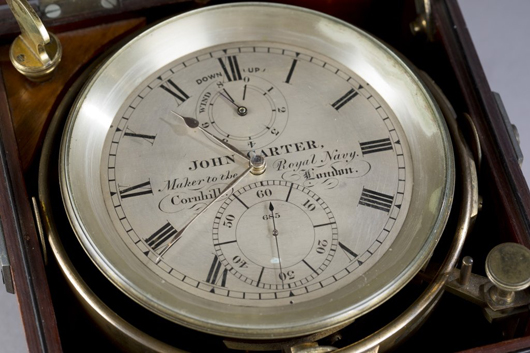 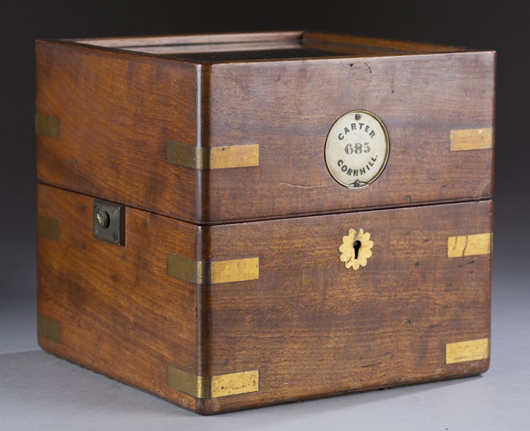 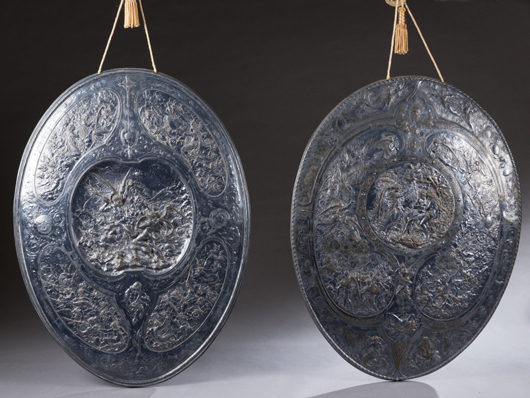 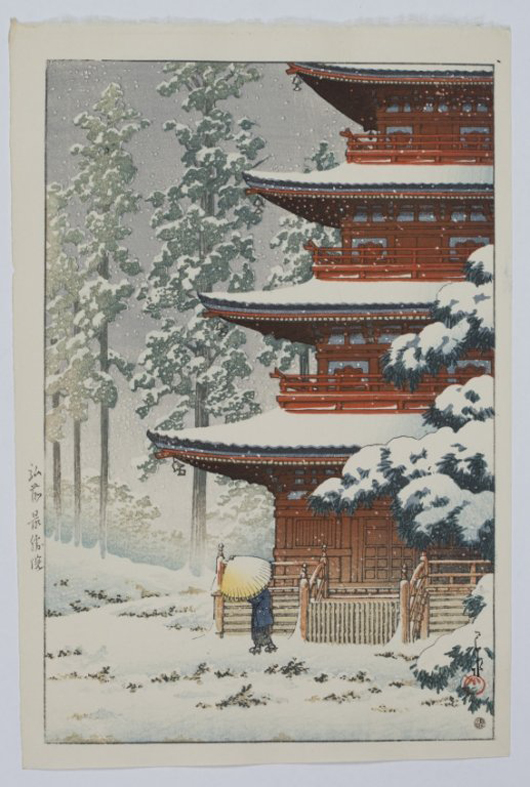 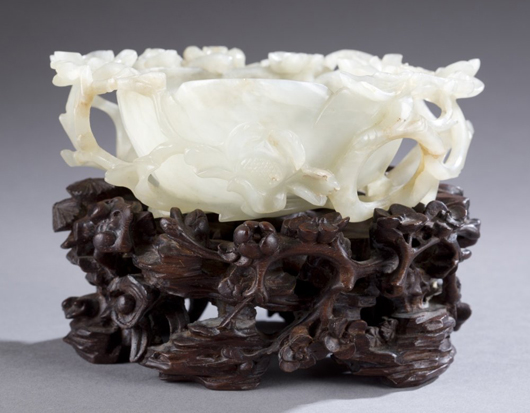