Original box art for Remco’s 1980-81 series of six Universal 9-inch monster action figures, including L to R: Dracula, Wolfman, and Creature from the Black Lagoon, plus (not shown) Frankenstein, Mummy, and Phantom of the Opera. Each artwork measures 17½ x 20 5/8 inches and is estimated at $5,000-$10,000.

YORK, Pa. – Monsters, Beatles, superheroes and U.S. presidents might sound like strange bedfellows, but their paths will intersect compatibly on March 11-12 at Hake’s first auction of the new decade. More than 2,000 lots of prime pop culture memorabilia will be offered over the two days, encompassing hundreds of popular collecting categories. View the fully illustrated catalog on LiveAuctioneers.

Auction fireworks could erupt when early original comic art by the legendary Winsor McCay (American, circa 1866/71-1934) crosses the auction block. McCay’s 1903 mixed-media Sunday color page titled “Why the Parrot Learned to Talk” features mischievous characters known as “The Jungle Imps,” who starred in a Cincinnati Enquirer comic strip from January through November 1903. 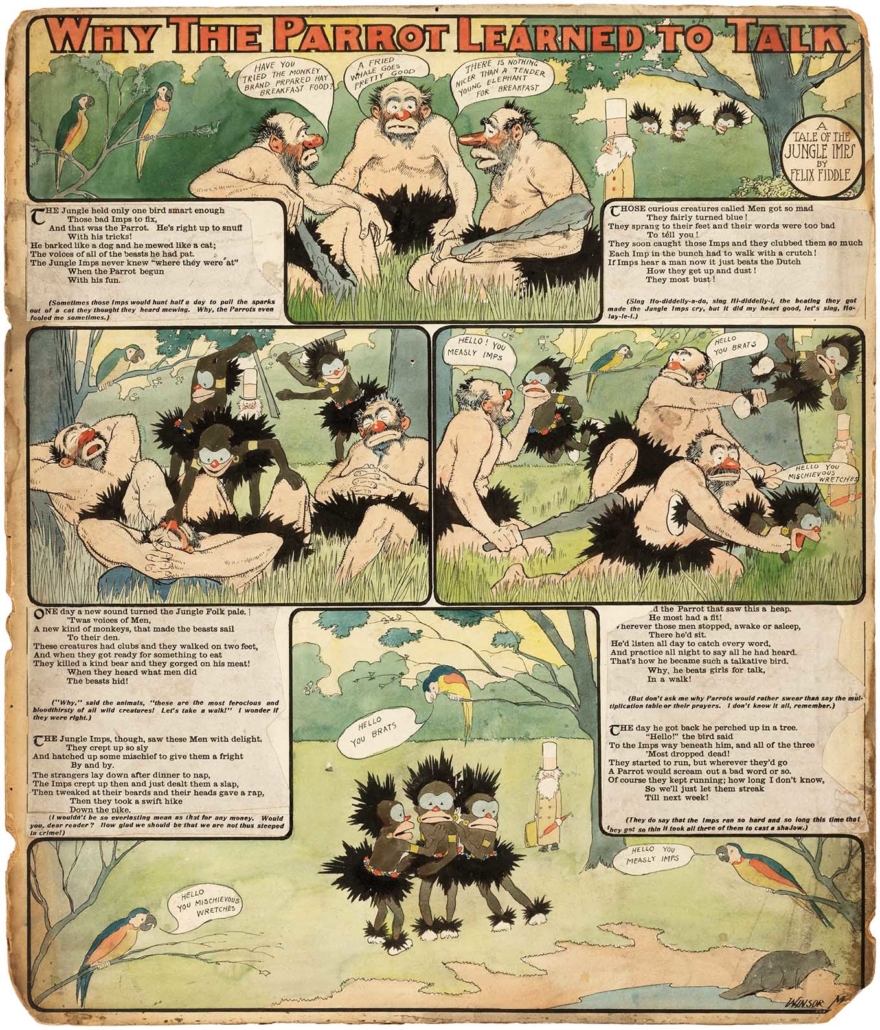 “Winsor McCay, who became famous for his Little Nemo comic strip and Gertie the Dinosaur animated cartoons, created the art for the Enquirer’s entire run of 43 Jungle Imps stories,” said Hake’s Auctions president Alex Winter. “McCay’s Imps art is ten times as rare as his later Nemo art. Knowledgeable collectors will jump at the chance to own the original art for a published Imps Sunday strip.” Estimate: $35,000-$50,000 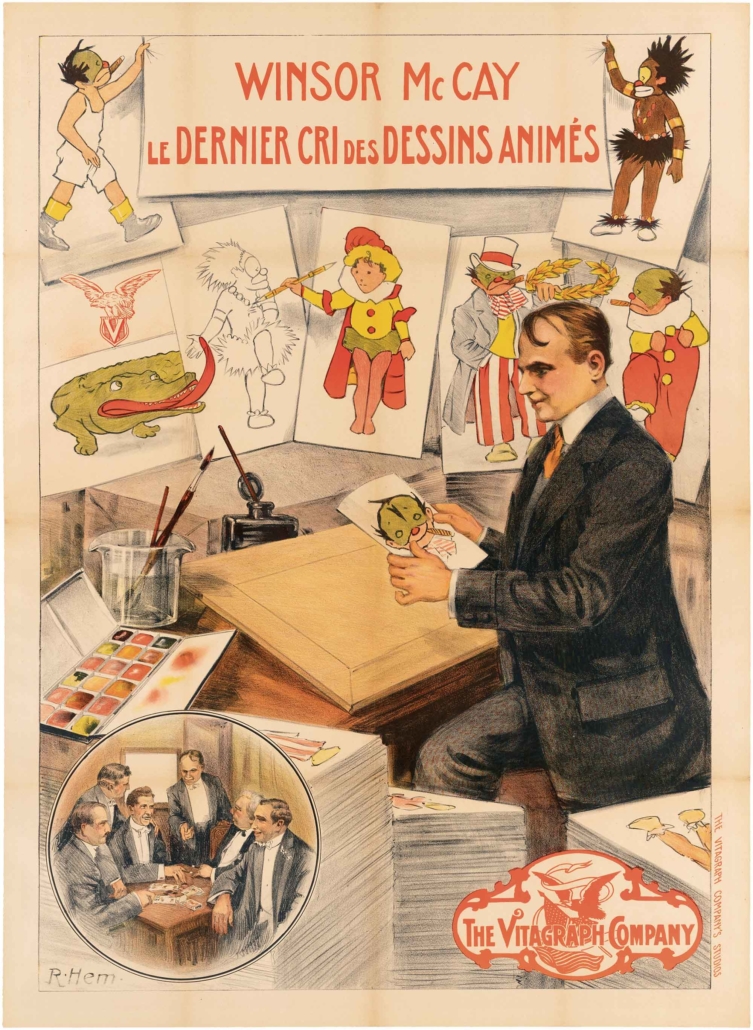 Winsor McCay’s talent was admired on both sides of the Atlantic by his fellow cartoonists, including the renowned French poster artist R. Hem. In 1911, Hem created a vibrant poster to promote the short “Little Nemo,” with a French heading that translates to “Winsor McCay – The Latest in Cartoons.” It colorfully depicts McCay at his desk, surrounded by paints, brushes, drawings of his famous characters, and an inset depiction that pertains directly to the cartoon short. An extremely rare example of this poster – thought by some to be the first cartoon poster ever created – is entered in Hake’s auction with a $10,000-$20,000 estimate. 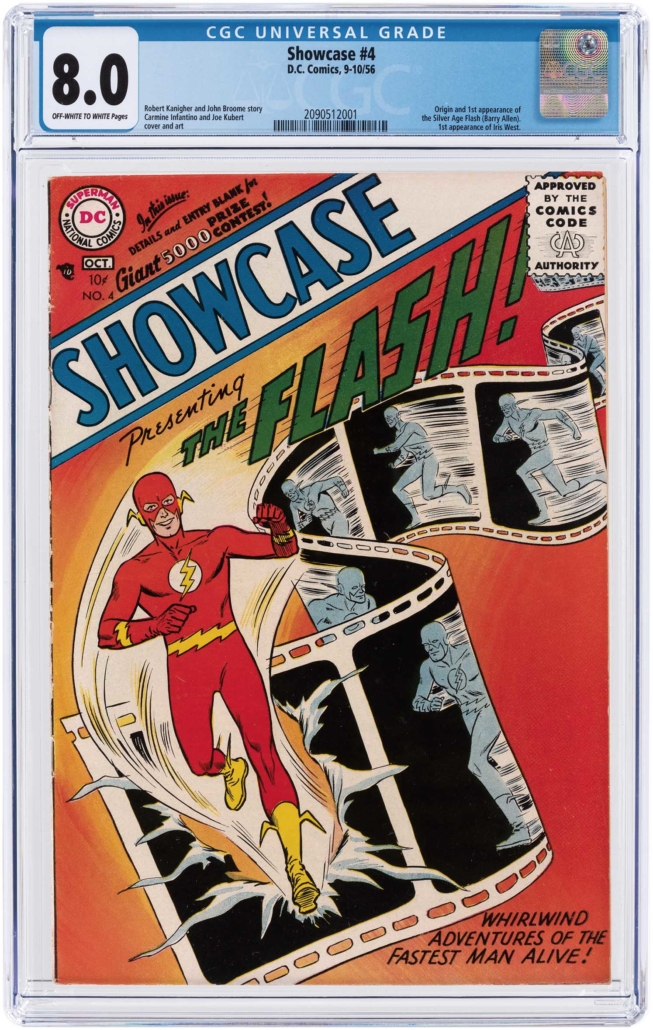 More than 1,600 comic books will be offered, including 300+ issues that are certified (mostly CGC). There are many key issues, first appearances, Pedigree copies, and books from Signature Series. Leading the group, a Sept./Oct. 1956 issue of Showcase #4 in 8.0 VF condition is historically important because it contains the origin story and first appearance of the Silver Age Flash, one of several superheroes DC reinvented in the post-WWII era. “According to the CGC census, there are only 494 certified copies of this issue worldwide, and only 12 have a higher grade than the one in our sale. It’s a gem, and we think collectors will be fighting for it,” Winter said. Estimate: $75,000-$100,000 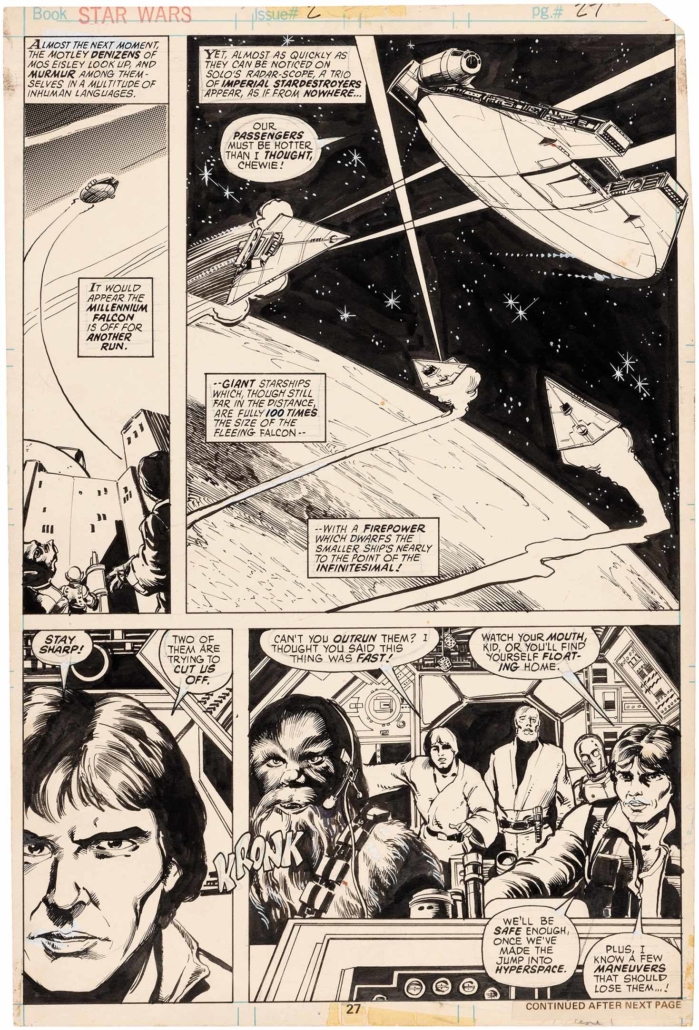 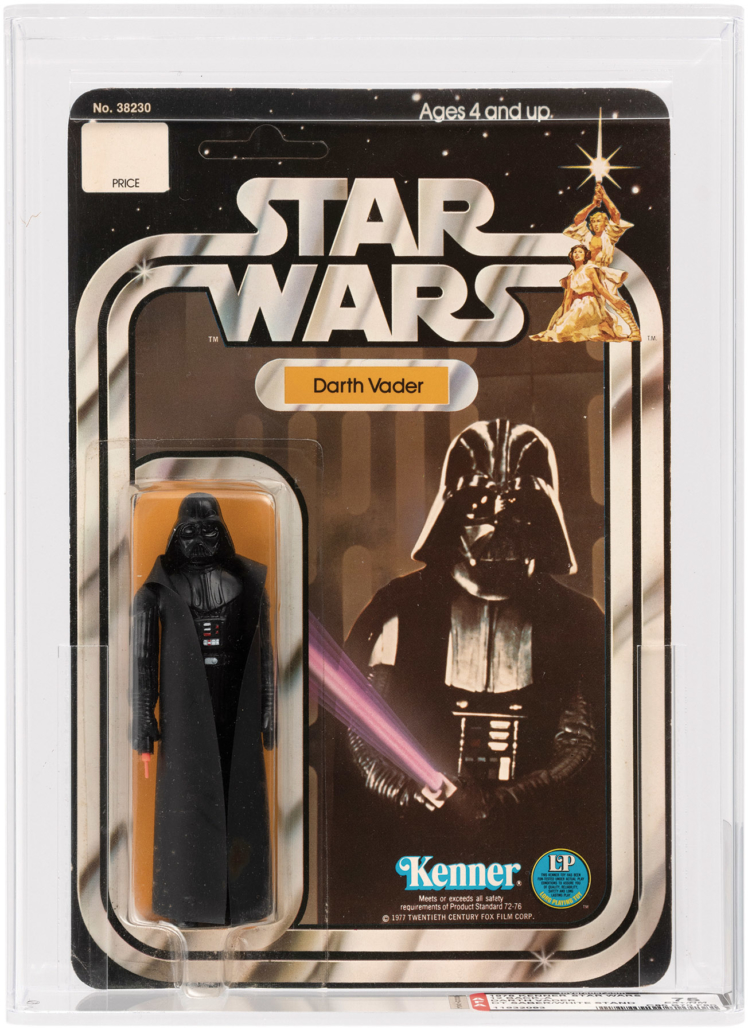 With a history of one blockbuster result after another for ultra-rare Star Wars action figures, Hake’s has still more surprises in store, starting with a double-telescoping Darth Vader 12 Back-A, AFA graded 75 Ex+/NM. “What sets this very early example apart from any other Vader we have sold is that the card is unpunched and, significantly, it comes packaged with a white cardboard stand beneath the figure’s feet. Only a prototype could pre-date this one,” said Winter. Accompanied by a notarized CIB LOA, its auction estimate is $75,000-$100,000.

From the same now-legendary Minnesota collection that produced the Darth Vader comes a Jawa 12 Back-A action figure graded AFA 60 EX in an unpunched blister card. The vinyl cape indicates it is the earliest iteration of the figure. Unquestionably a significant piece within the rarefied niche of pre-production and early production figures, it comes with a CIB LOA. Estimate: $20,000-$35,000 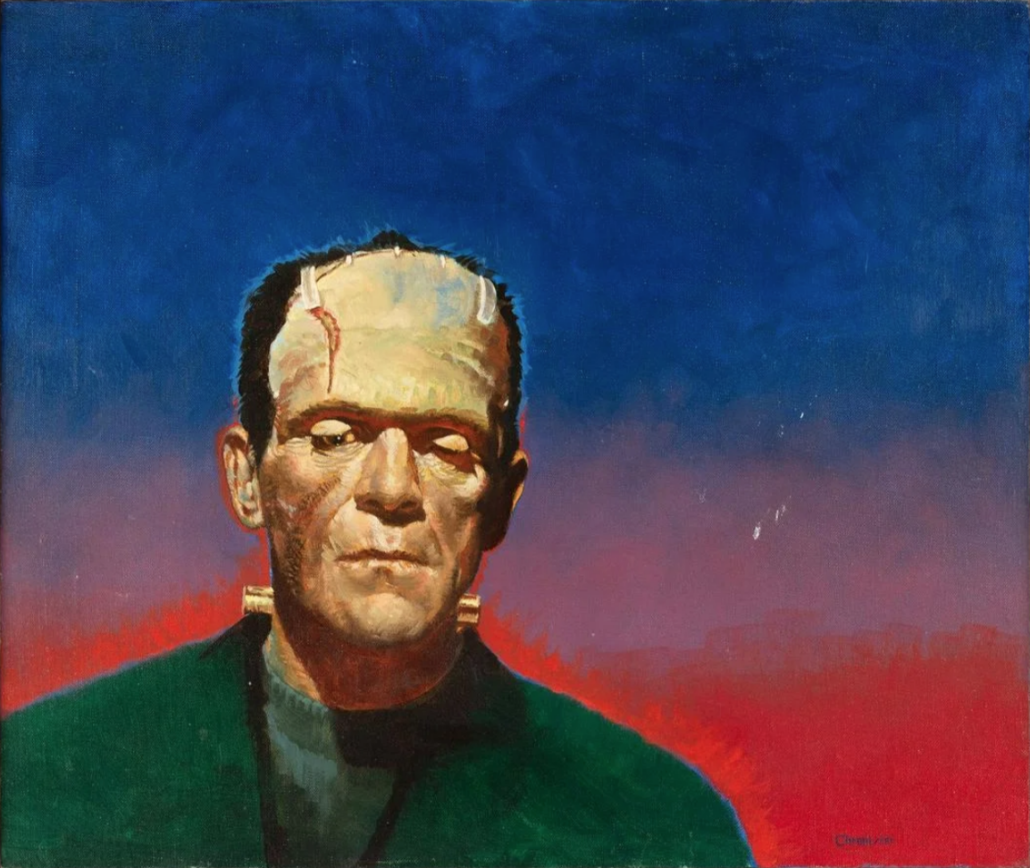 Original oil-on-canvas Frankenstein artwork used as box art for 1980-81 action figure produced by Remco, from series of six monster paintings to be auctioned by Hake’s. Estimate $5,000-$10,000

An unheard-of opportunity presents itself in the form of six original oil-on-canvas paintings (shown at top of page) created as the box art for Remco’s 1980-81 series of Universal 9-inch monster action figures. The subjects are: Frankenstein (shown immediately above), Dracula, the Mummy, Wolfman, the Phantom of the Opera, and the Creature from the Black Lagoon. The consignor acquired the paintings directly from sources at Remco. Each of the artworks measures 17½ by 20 5/8 inches and is estimated at $5,000-$10,000. 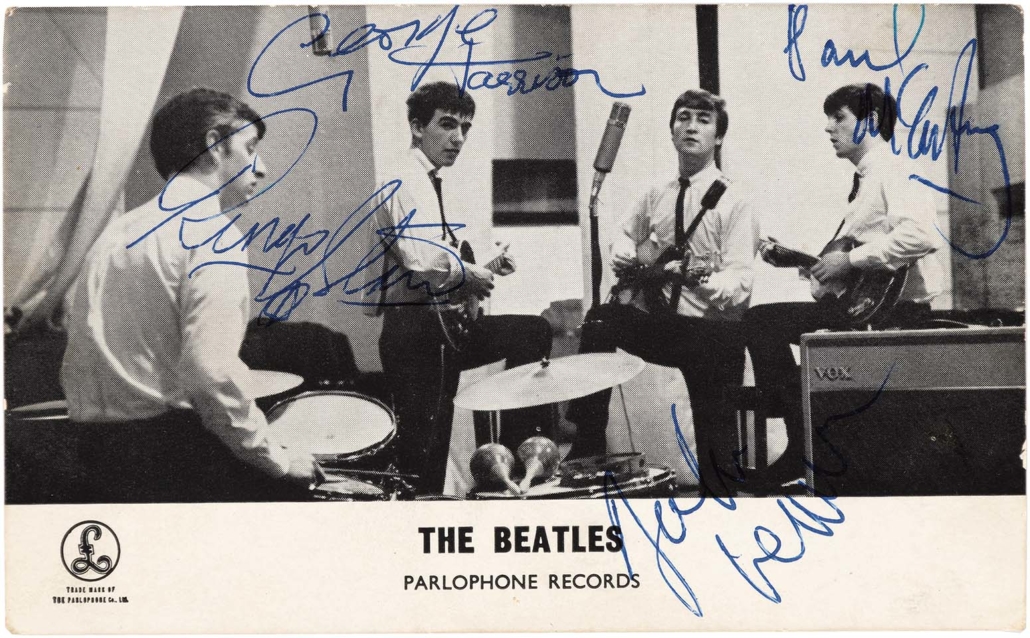 Collectors of Beatles memorabilia still feel the same excitement the legendary Fab Four ignited when they first set the music world on fire nearly 60 years ago. The auction offers several coveted Beatles items, including a 1962 band-signed Parlophone Records photocard. The card is one of only two known examples of its type with all four bandmates’ signatures on the front. Accompanied by a Hake’s COA and LOA from Beatles autograph expert Frank Caiazzo, it is estimated at $10,000-$20,000. 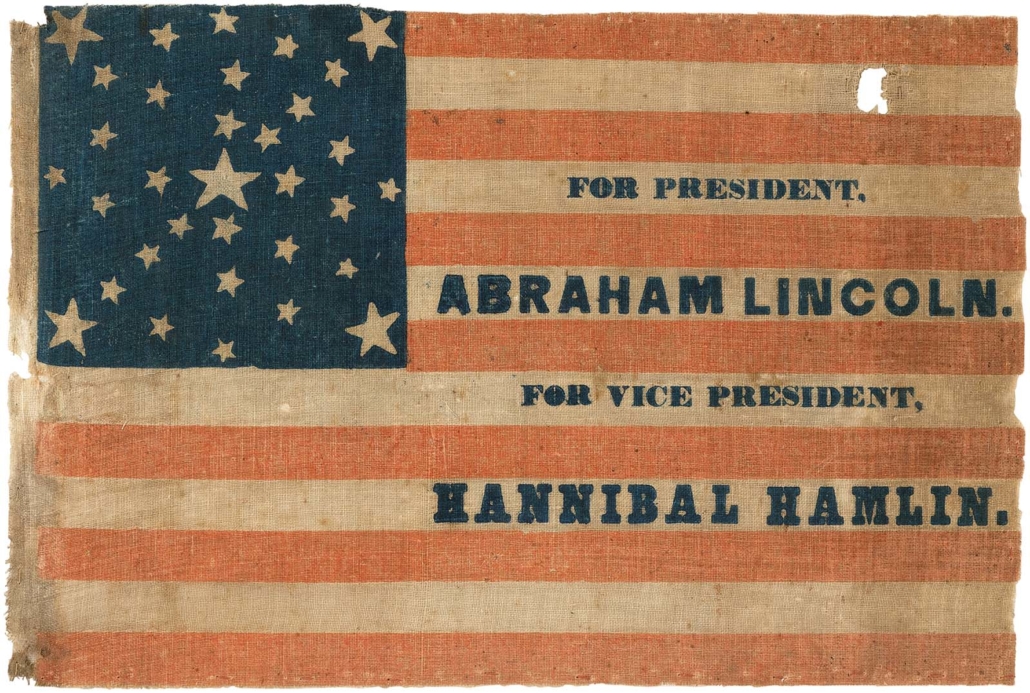 Flying high over Hake’s parade of early political memorabilia, an Abraham Lincoln and Hannibal Hamlin 1860 campaign flag is so rare – one of only two known – that it was not even listed in the respected reference Threads of History, as its existence had not yet been established. Arguably, the historical importance of this extraordinary 33-star pre-Civil War flag is inestimable. At auction, it is expected to make $20,000-$35,000. 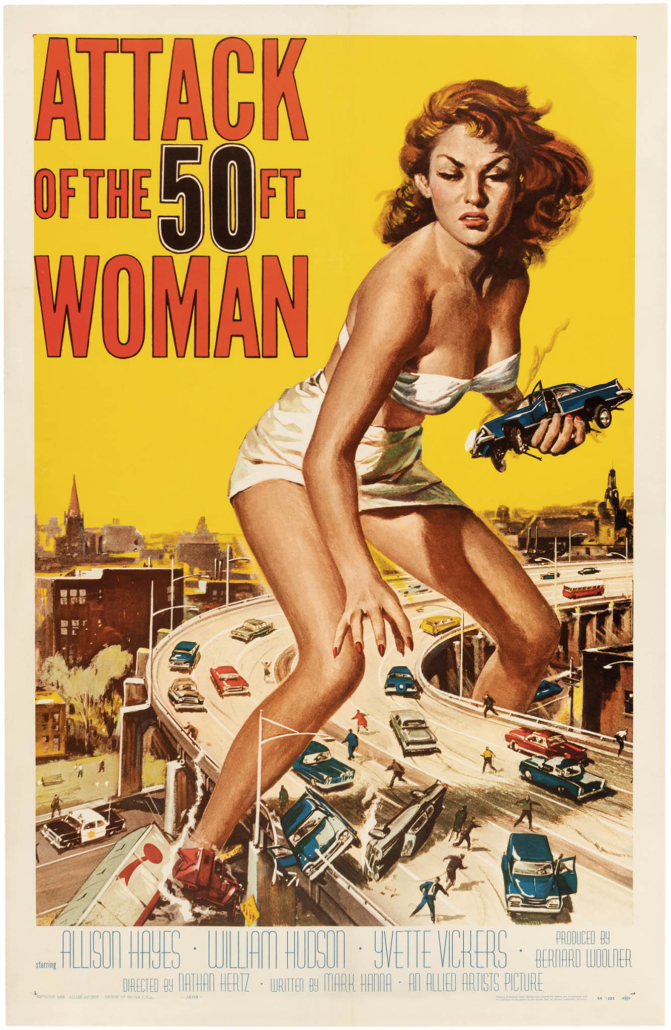 As always, a tempting selection of posters is available. Towering above the movie subcategory is a linen-mounted one-sheet poster for the original 1958 release of the sci-fi classic Attack of the 50Ft. Woman. Estimate: $5,000-$10,000. Among the signs from music venues and outdoor concerts is an original psychedelic poster promoting the 1968 Monterey International Pop Festival, where Jimi Hendrix made his first electrifying US appearance. Estimate: $1,000-$2,000

Click to view the fully illustrated catalog on LiveAuctioneers