WICHITA, Kan. – The first of five auctions to sell the huge lifetime collection of mostly porcelain and glass pieces accumulated over 50 years by the late Dr. Ernest Rieger and his wife, Karin, will be held Thursday, March 20, at the Doubletree Airport Hilton in Wichita, Kan. The auction, beginning at 1 p.m. (CST) will be conducted by Woody Auction.

The Riegers were discerning and serious collectors, seeking out only the finest names in porcelain and glass, such as Tiffany, Galle, Meissen, Webb, Daum Nancy, KPM and others. The couple also collected period antique furniture, which they kept in their spacious Wichita home. The furniture will be sold in the later auctions. Parts 2 and 3 will be held May 29 and Aug. 1-2.

“This is by far the finest antique collection we’ve ever offered, and it might be the finest ever offered in the state of Kansas,” said Jason Woody of Woody Auction, based in Douglass, Kan. “Prior to Dr. Rieger’s passing, Karin and Ernest made the decision to sell the collection at public auction, the way they enjoyed buying. All items in all the auctions will be sold to the highest bidders without reserves.”

Mrs. Rieger, who still lives in Wichita, said the collection began quite by accident, more than 50 years ago, when her parents were visiting from Sweden. “My mother went to a car wash and while she was waiting she saw some Galle pieces displayed on a shelf inside the waiting area,” she said. “She asked the lady if they were for sale and she said yes so she bought one.”

That Galle vase was the first item in a collection that would grow to around 3,500 pieces (including the rest of the Galle at the car wash as Karin’s mom, already a fan of Galle, went back and bought them all up, for $5-$10 apiece). “After that we hunted for more Galle pieces, in several states,” Mrs. Rieger recalled, “but later on our tastes and interests branched out to other things.”

One Galle piece certain to attract attention is a museum-quality, 20-inch-tall French cameo art glass vase dated 1914, with a scene depicting a burning French cathedral with the ruins shown on the reverse side. The lot comes with an original copy of Le Pays de France magazine, dated Sept. 19, 1914, with an artist’s rendition of the cathedral under bombardment on the cover.

French cameo glass and English cameo glass would become important elements in the Riegers’ collection over time. “French cameo glass, especially, wasn’t respected by the antique dealers of the 1950s and ’60s and we could never figure out why,” Mrs. Rieger said. “We were intrigued by it – me for how it looked and my husband, ever the scientist, for how it was made.”

By the mid-1960s Tiffany and Daum Nancy had crept into the Riegers’ collection, and numerous examples from both makers will be offered Mar. 20. Daum Nancy will be represented with a rare 13 1/2-inch signed art glass boudoir lamp in the highly desirable Rain Scene décor, and an 11-inch signed art glass pedestal vase in the Spring Season Lake décor. Both are gorgeous.

The name Tiffany will be chanted frequently throughout the day. Top lots will include a signed gold iridescent Lava pattern vase with green iridescent interior, another Lava vase having a Cypriot background with gold iridescent leaf-shaped decorated petals, and a signed Favrile decorated art glass vase with a soft blue iridescent body and a rim with Tel-El-Amarna décor.

“In the early 20th century, Louis Comfort Tiffany was very much inspired by what was discovered in the tomb of King Tutankhamen,” Mrs. Rieger explained. “In many of his designs of the 1920s he was trying to imitate some of the glass that was dug up at the site. He was very keen on that and he dedicated part of his heritage to approximating King Tut’s look and design.”

The Riegers’ appreciation for English cameo glass came into full bloom in 1968, while on a trip to England. “We went into this little antique shop, and the lady there put us in touch with a Mr. Benjamin Nyman, whose house we visited,” she said. “What a place! It was more a museum than a residence, with wonderful English cameo glass on several floors. It was just breathtaking.” Mr. Nyman wrote two books on English cameo glass, and some of the pieces shown in one of those books will be sold in the auction.

Fans of Meissen, the renowned German porcelain manufacturer, will not be disappointed. Lot number 250 is a museum-quality set of four pedestal-handled ewers  from the Elemental Series, representing Earth, Wind, Fire and Water. All four are approximately 25 inches tall and have the traditional Meissen blue crossed swords mark.

Also from Meissen is a magnificent 30-inch two-handle covered urn, showing a man and a woman seated at a game table with floral décor and cherub highlights. Also from Germany is a remarkable pair of 15 1/2-nch marked KPM porcelain plaques. One is of Rembrandt’s mother and the other of Rembrandt’s father. Both are signed and housed in gilt wood frames.

Mount Washington pieces will include a 12-inch decorated Burmese bowling pin-shaped vase showing owls perched on branches, front and back; a 7 3/4-inch decorated Burmese tall pitcher having a rose décor with four-line stanza by Thomas Hood and applied glossy handle; and a 13 1/2-inch Royal Flemish handled ewer with multi-colored background with a lion graphic.

“This collection was more than just a hobby for my husband and me,” Mrs. Rieger said. “It was a source of tremendous interest and something we took great pride in, plus it was something we could do and enjoy together, and for different reasons. I liked the aesthetic appeal of the pieces, how they looked. He was a man of science and liked how they were made.”

The furniture collection actually predated the porcelain and glass by a couple of years, as the Riegers wanted to outfit their large Wichita home with interesting and unusual pieces. In the mid-1960s, a tornado ravaged the residence and when they rebuilt, they were careful to install 10 large illuminated cabinets in their basement, to house and protect their glass and porcelain.

For details contact Woody Auction at 316-747-2694 or email info@woodyauction.com. 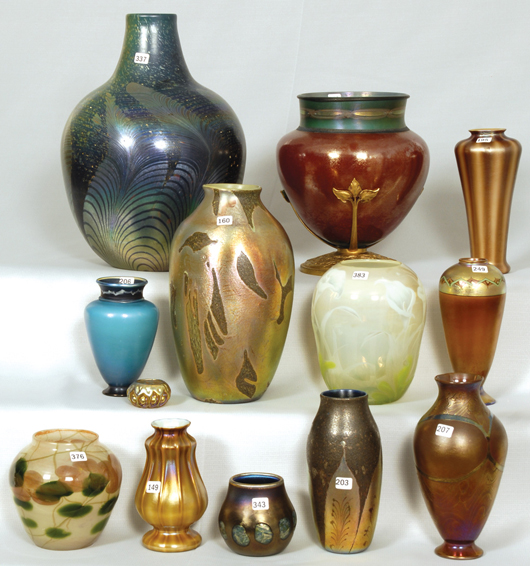 The name Tiffany will be chanted frequently throughout the day. These wonderful art glass pieces will all be sold. Woody Auction image. 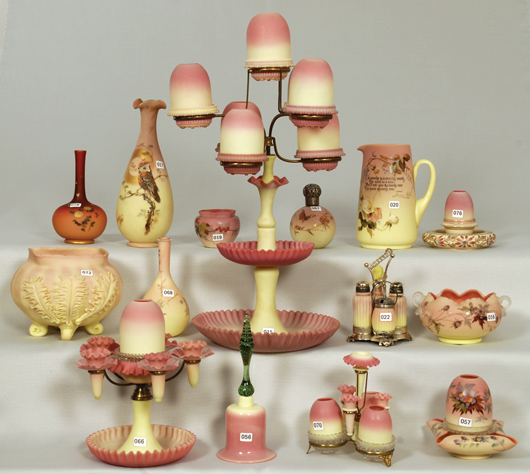 A large selection of gorgeous Burmese pieces, like these shown, will be sold without reserve on March 20. Woody Auction image. 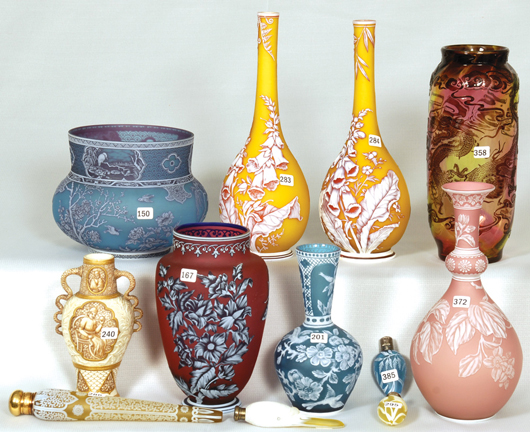 The Riegers’ interest in English cameo glass pieces, like these shown, began while on a trip to Great Britain in the 1960s. Woody Auction image. 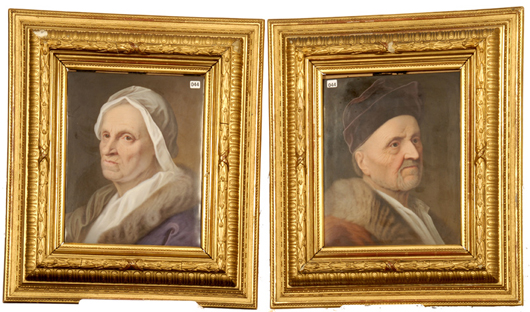