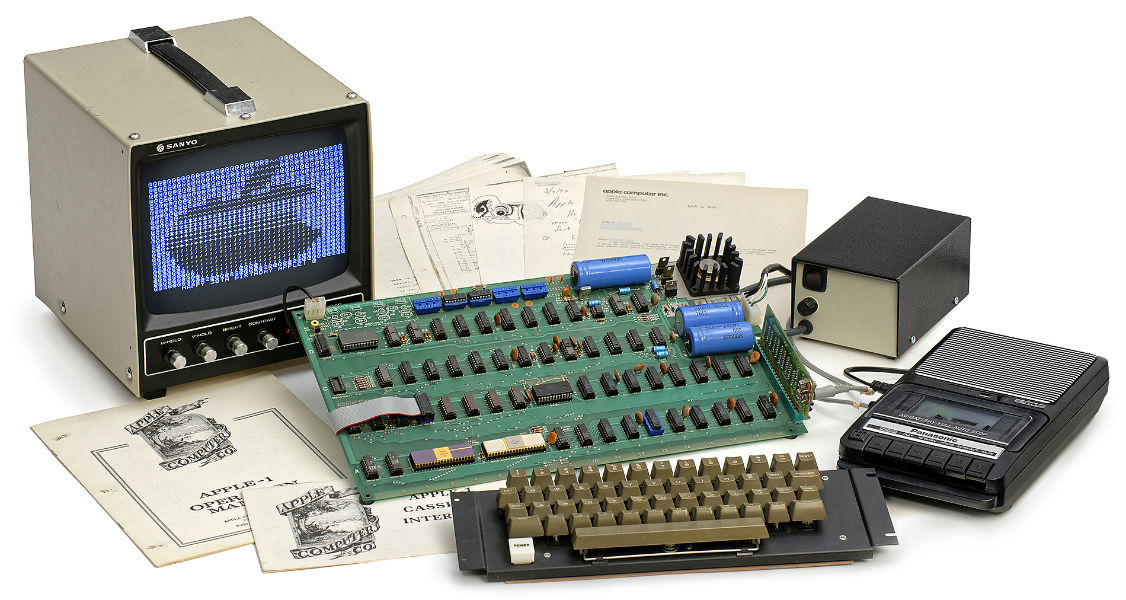 COLOGNE, Germany – Apple aficionados will have a chance to acquire a unique piece of personal computer history when an original Apple-1 will be offered at Auction Team Breker’s Science & Technology, Automata & Toys auction May 20. Absentee and Internet live bidding is available through LiveAuctioneers.

When Steve Jobs and Steve Wozniak presented their kit-form computer to the Byte Shop in 1976, owner Paul Terrel was quick to see a gap in the market. “What I needed was an assembled and tested unit that could sell to people that really wanted to use them and not just to the technical audience,” he recalled in a 2015 interview.

Convinced, the young entrepreneurs made their first sale of 50 assembled Apple-1 units for $500 each and the first ready-to-use PC was born. Terrel’s Byte Shop became the first retailer of the original Apple-1 computer.

The groundbreaking computer that Auction Team Breker is selling is complemented by a rare white ceramic 6502 microprocessor and a complete set of time-correct chips. In full working condition, the outfit was consigned by its first and only owner, a software engineer from Berkeley in California’s Silicon Valley.

In 1853 Charles Dickens wrote that a speaking doll “rises to the dignity of an automaton,” suggesting that the complex clockwork toys of his day transcended the fields of juvenilia and mechanics alone. Before the invention of moving pictures and recorded sound, android entertainers like the Marchand des Fruits by Gustave Vichy enchanted children and adults alike. The automaton carries a tray with three upturned papier-mâché fruits (an apple, a pear and an orange) that open to disclose three mechanical apparitions: a monkey’s head turning from side to side, a waltzing couple and a white mouse running in circles (estimate: €25,000–€30,000 / $26,800–$32,100). 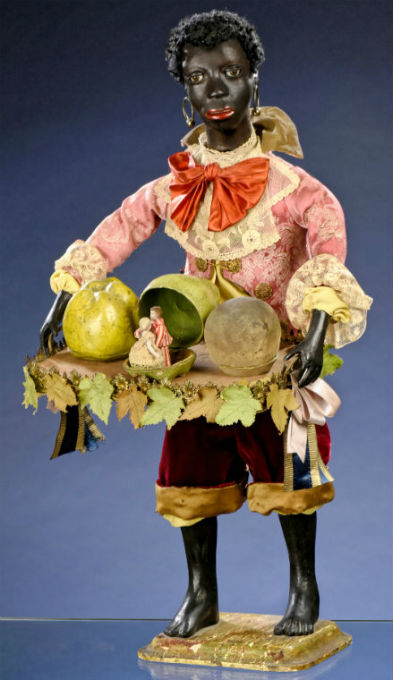 The significance of the magical orange would not have been lost on 19th century audiences familiar with the spectacle of the Marvelous Orange Tree illusion created and performed by Jean Eugène Robert-Houdin, whose mystery clocks, automata and stage illusions exploited the unexpected association. “The art of conjuring bases its deceptions upon manual dexterity, mental subtleties and the surprising results which are produced by the sciences,” he wrote in Secrets of Conjuring and Magic: Or How to Become a Wizard in 1878.

Robert-Houdin, one of the first gentleman magicians, is also widely credited as introducing evening dress into stage performance. By contrast, Alexandre-Nicolas Théroude’s magician clock harks back to an earlier and more exotic tradition in which magicians appeared in robes to heighten their oriental associations (estimate: €18,000–€25,000 / US$19,000–$26,500). 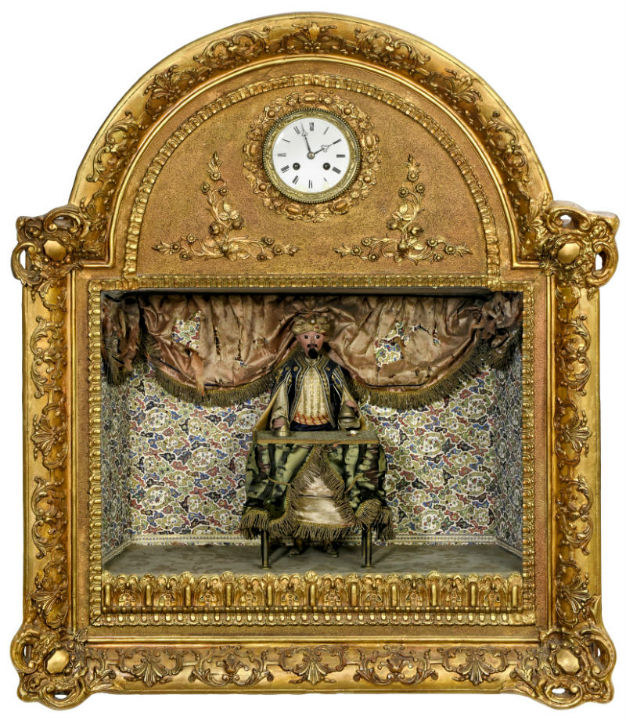 Even more enchanting is the Monkey Schoolmaster produced by Jean-Marie Phalibois for the third Exposition Universelle, which attracted more than 13 million visitors to Paris in 1878. Phalibois exhibited in Class 42, described in the Guide Conty de l’Exposition Universelle as containing “toys of every description, each more ingenious than the last.” The Monkey Schoolmaster carries an €8,000–€12,000 / US$8,600–$12,800 estimate. 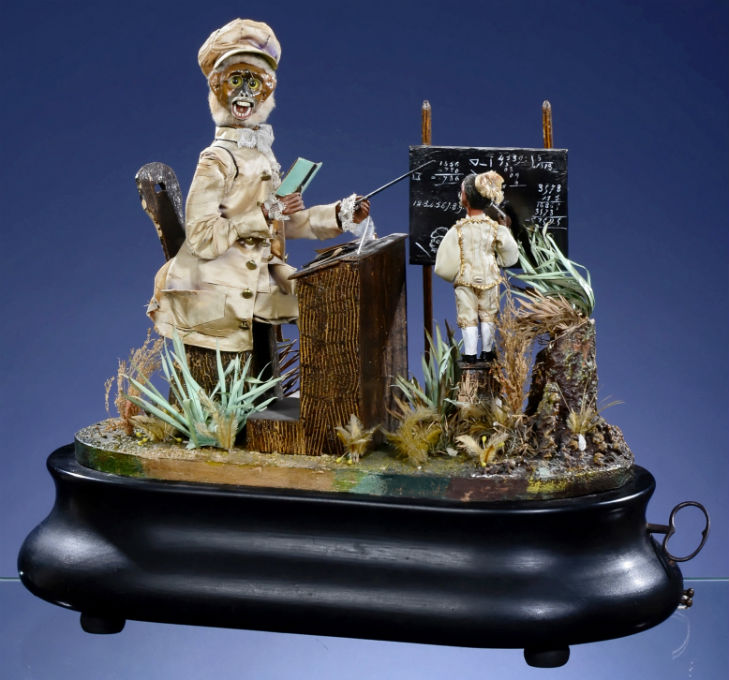 While parlor automata provided a form of intimate home entertainment, coin-operated music machines such as the Musique du Gare encouraged passengers to while away the time on the Jura-Simplon Railway in Switzerland at the turn of the 20th century (est. €15,000–€20,000 /US$16,000 -$21,200. 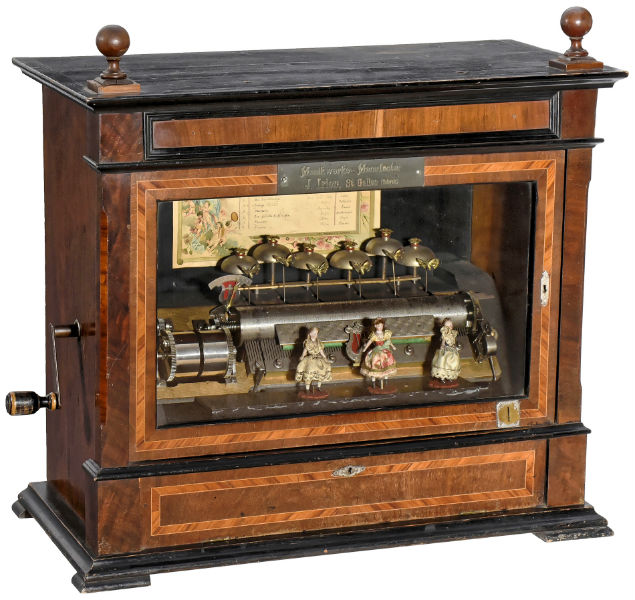 For details contact Auction Team Breker, specialists in technical antiques, by phone at 02236/38 43 40 or email Auction@Breker.com.