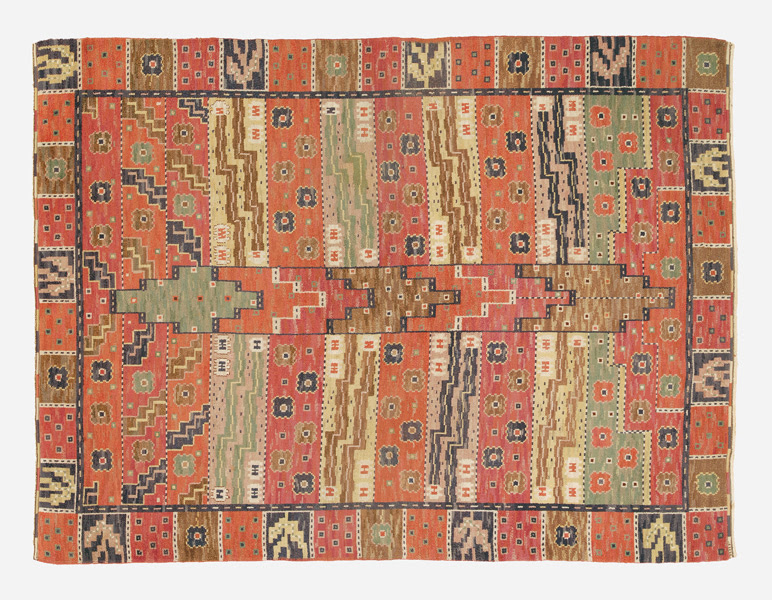 CHICAGO – Wright will present the first stand-alone auction dedicated to woven masterpieces from the Märta Måås-Fjetterström workshop on May 3. This extraordinary sale celebrates the legacy of one of the most innovative textile companies of the 20th century.

Exploring techniques, patterns and weaves, “Treasures from the Märta Måås-Fjetterström Workshop” includes approximately 100 lots of compelling carpet designs and tapestries, in a variety of sizes and colors, designed between 1920 and 1970.

For nearly a century the Märta Måås-Fjetterström workshop has been producing carpets, textiles and weavings of the highest quality and craftsmanship. The company was formed in 1919 by Märta Måås-Fjetterström, an innovative and influential artist who revived declining weaving techniques and introduced the exploration of texture in her carpet designs. During her lifetime, Måås-Fjetterström created more the 700 original patterns blending folk and traditional handicrafts with Art Nouveau and Art Deco styles.

When Måås-Fjetterström died in 1941, the renowned textile artist Barbro Nilsson became the workshop’s director. Nilsson, who trained as a textile artist and wove all of her own designs, continued in Måås-Fjetterström’s footsteps creating many flatweave, pile and tapestry-woven carpets featuring simple patterns with an emphasis on color, the subtle variation in hue enlivening her works. Masterpieces by Nilsson include a Stjärnflossanpile carpet designed in 1957 (estimated at $40,000–$60,000), a monumental gold Spättan tapestry weave carpet designed in 1943 (estimated at $30,000–$40,000) as well as a few vibrantly colored variations
of her Falurutan flatweave carpet originally designed in 1952 (estimates vary).

Other designers associated with the Märta Måås-Fjetterström Workshop featured in this sale include Ulla Brandt, Bruna Heden, Anne Marie Lindblom and Marianne Richter.