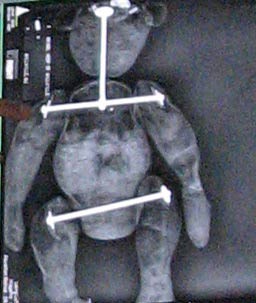 Here it is, in black and white: A-Rod’s inner workings.

VINELAND, N.J. – Veterinarians are accustomed to seeing animals of all shapes and sizes in the course of their daily work, but few – like Dr. Hal Blumenthal of Millville, N.J. – can say they’ve had a teddy bear for a patient.

It all started when Bertoia Auctions, antique toy specialists in Vineland, N.J., received a circa-1903 Steiff bear as a consignment to their Nov. 7-9 sale. Bertoia’s experts immediately identified it as a rare production from the early 20th century, but they knew that if they could confirm it was, as suspected, a Steiff “rod” bear, it would greatly increase its value and desirability to collectors.

“Rod bears get their name from the interior rods that Steiff placed inside them to function as joints,” said Bertoia Auctions’ owner, Jeanne Bertoia. “The presence of these rods adds a special pedigree, since the rod bear is one of the rarest of all Steiff productions.”

To settle the orthopedic question once and for all, Jeanne Bertoia and her son Michael took the 16-inch cinnamon mohair bear now named “A-Rod” (after New York Yankees star slugger Alex “A-Rod” Rodriguez) to their family vet.

“Dr. Blumenthal’s staff was excited about his arrival, and they played right along,” said Jeanne Bertoia. “When he checked in, they filled out his paperwork, asking his name, sex and age. At age 105, he surely must have been the oldest patient ever to pass through their doors.”

A-Rod was delicately handed over to Dr. Blumenthal, who chuckled as he laid the patient on his back and took the X-ray. Minutes later, the evidence was in – the film proved that the long-limbed Steiff teddy was, indeed, a rod bear.

“We had a lot of fun with it,” said Jeanne Bertoia, “and it was a worthwhile effort, since we now have radiological provenance to pass along to the bear’s new owner.” 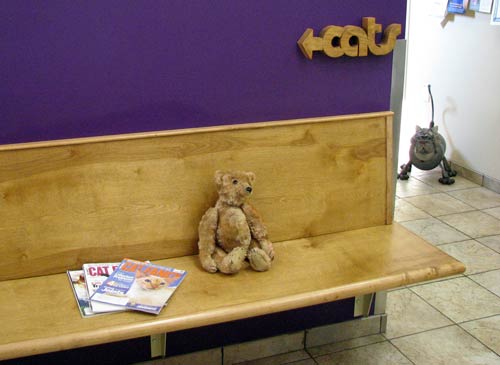 A-Rod, a 1903 Steiff teddy bear, sits in the waiting room in Dr. Hal Blumenthal’s veterinary offices, as a cat curiously peers around the corner at the unusual patient. 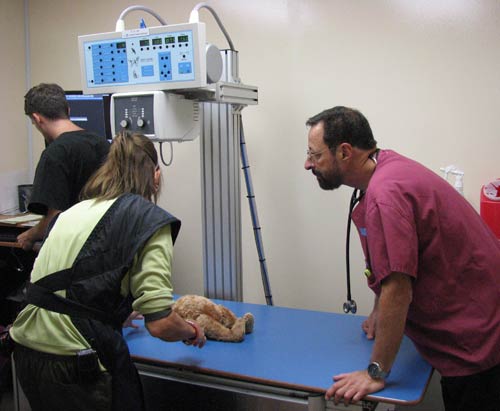 A-Rod is positioned for his X-ray, under the supervision of Dr. Hal Blumenthal (right). 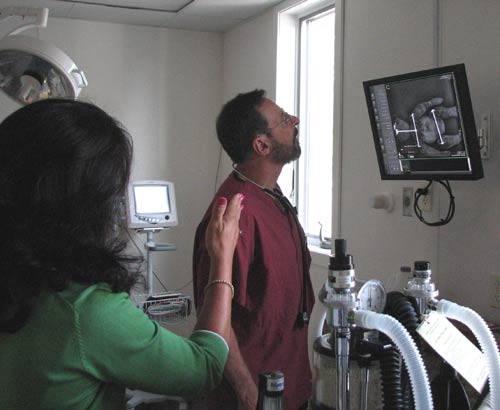 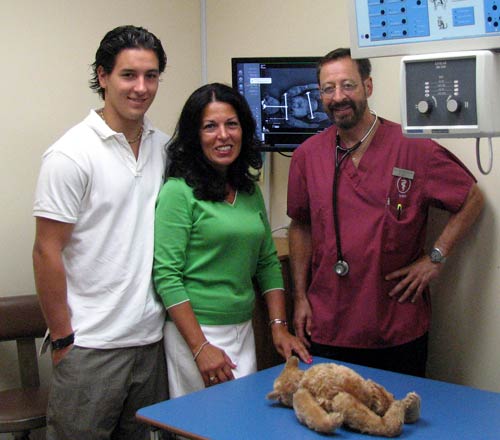 (Left to right) Michael Bertoia, Jeanne Bertoia, and Dr. Hal Blumenthal with the patient, a 1903 Steiff rod bear, whose X-ray is displayed to the rear.