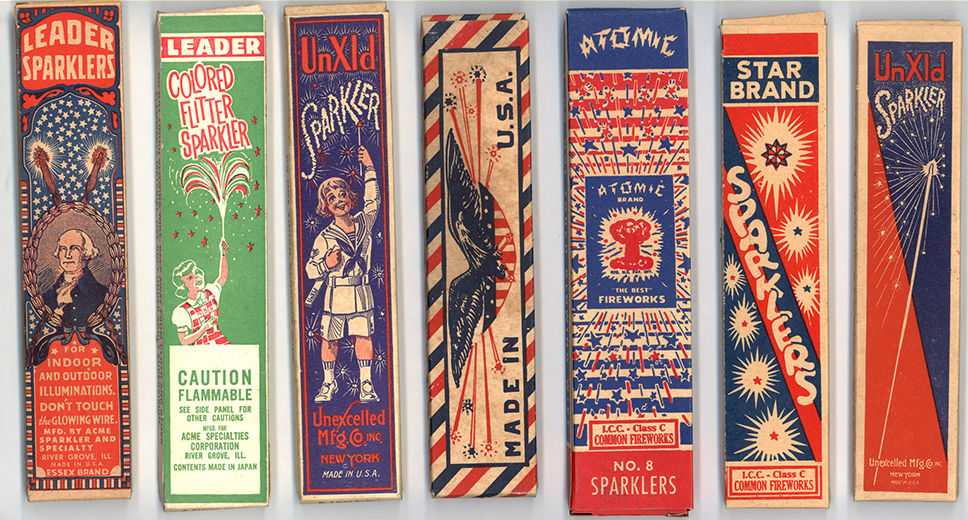 Fireworks are transformative. There’s the obvious physical and chemical transformation of a colorful and tightly packaged explosive into an often radiant, loud and enchanting spectacle. However, for some people like Sal Giudice, the transformation is more profound.

“For me, as with many others, the transformation of a fun-loving kid into a full-blooded patriot, started with fireworks on the Fourth of July,” says Giudice, who partners with his son to present a fireworks display for their Fourth of July celebration each year.

With this as the cornerstone of his appreciation of fireworks, it’s easy to understand how they have captivated and entertained this East Coast fireworks enthusiast for more than five decades. It was a bit like love at first sight when at the age of 6 he experienced a Fourth of July celebration accompanied by a glorious display of fireworks. 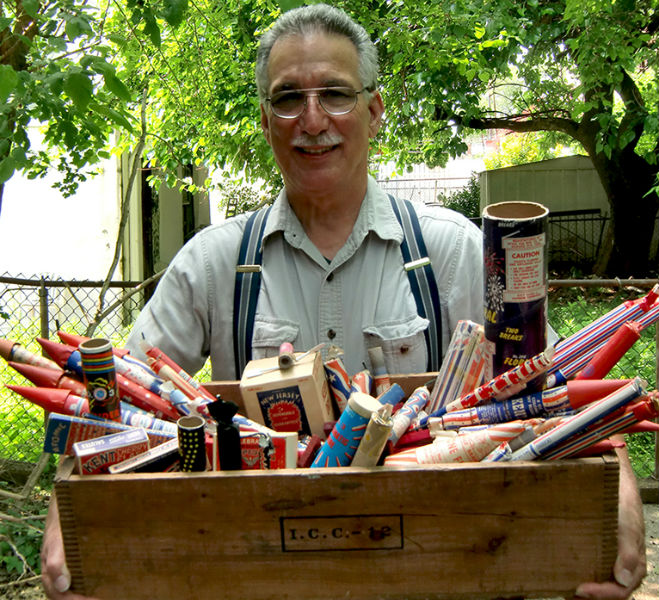 Sal Giudice with a crate of the many vintage fireworks and related memorabilia in his collection.

“I can still recall those great noisy days,” he adds. “Back then, and even now, a rainy day on the Fourth of July was considered a curse. It could rain 364 days out of the year, just not on the fourth.”

About 25 years ago Giudice’s appreciation for fireworks became the subject of his collecting efforts. It’s an effort that is as much nostalgic adventure and enjoyable historical study, as it is a process of acquisition.

“People ask why I still shoot fireworks and why I collect them. I give the same answer to both: ‘As you go through your life you need to hold on to something that brings back memories of the things you enjoyed in less complicated times,’” says Giudice.

“Collecting over the years was my way of holding onto that part of my life.”

In his two-plus decades of collecting, he has amassed a collection that numbers in the hundreds. The largest part of his collection consists of American-made common Class C fireworks. These types of fireworks are no longer produced, with the last of the American fireworks manufacturers going out of business in the mid-to-late 20th century, according to Giudice. The production of firework is nearly exclusive to Asia, where fireworks originated. 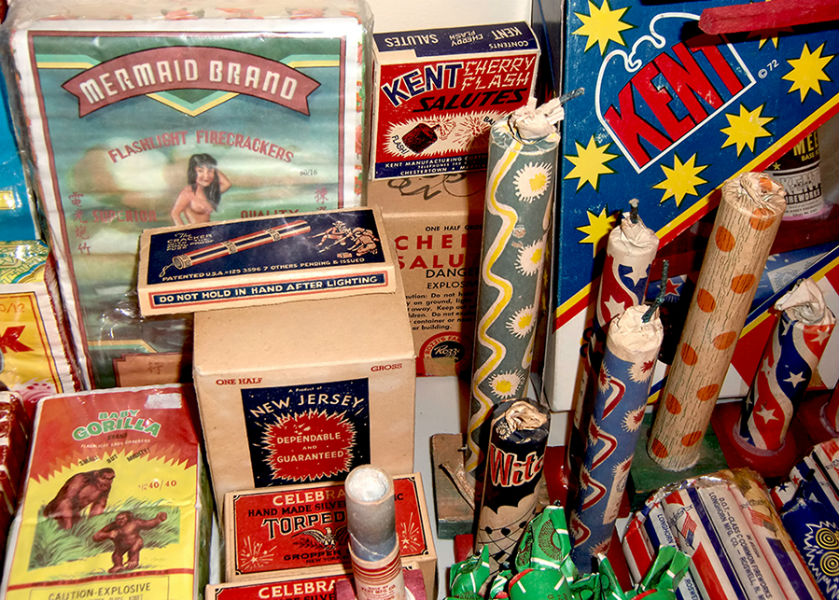 The colorful and creative designs and images that appear on vintage firework boxes make them desirable.

“Gone are the days of the Tristate Silverjets, Kent skyrockets, Zenith buzz bombs, Longhorn Roman candles, Acme sparklers and Miller M80s and cherry bombs,” he adds. “Those are the type of items that I try to collect.”

Although the last time Giudice added a vintage Class C firework to his collection was in 2015, he’s always on the lookout. Being aware of the laws concerning Class C fireworks is the other thing Giudice always keeps in mind, and advises others do as well if they are looking to collect pyrobilia (live fireworks). Some fireworks are illegal nationwide, he explains. Others may require a BATF license to handle and store, while many others are regulated by each state. The point is to know the laws, and live by the laws, or suffer the consequences. As Giudice notes, violating state and local laws could result in confiscation of fireworks, no matter what their value may be, or that they are a collection and not something to be sold or set off.

With that being the case, it’s good for Giudice and other collectors that there are a host of other fireworks and firework related memorabilia on which to base a collection. Welcome to the arena of sparklers, firecracker labels, catalogs, advertisements and empty original firework boxes, among other things. 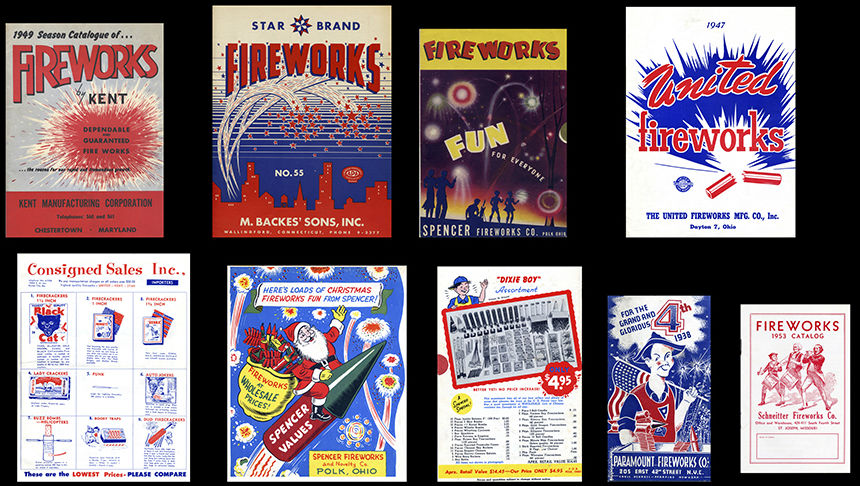 For Giudice the “other things” category includes comic books. “I go further than most fireworks collectors as I also look for comic books (Golden and Silver Age only) that have fireworks on the cover or a mail- order fireworks advertisement inside,” he states. “The firework ads were common in the Golden Age comic books, especially in the July issues; until they were prohibited in the early ’50s by the newly established Comics Code Authority, which pressured comics not only on content but also on the items they could advertise—and of course fireworks were banned.” 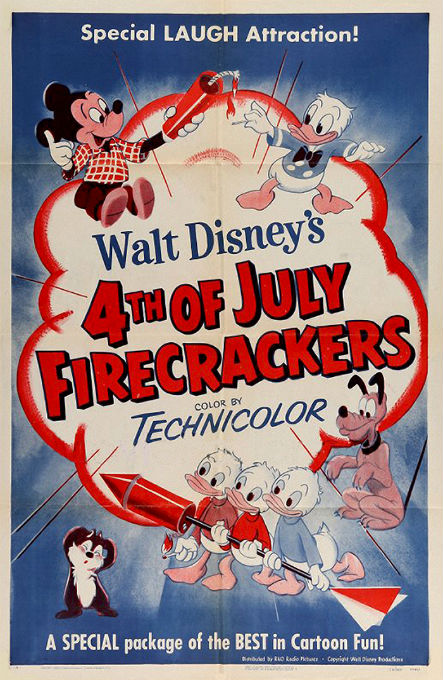 Another robust segment of Giudice’s collection is American-made sparklers. It was during the course of an online auction involving a box of Batman sparklers that he gained a valuable piece of collecting wisdom: Bid or buy (when possible) right when you see something that is unique and most appealing to you, because waiting can mean going without. Many years ago, while perusing auctions on eBay, Giudice came across a single box of Batman sparklers, which he had never seen before. The image on the box appeared to be the Batman image of the mid-1960s, and it left Giudice wondering if it might have been a copyright violation, having not come across one like it in his fireworks catalogs. While he did bid on the item, he was outbid when someone paid $70 for it, which at the time he thought was a high price. Since then, he’s changed his mind a bit about the price, as he’s never seen another, and he’s been looking ever since.

Of course one category of vintage firework that doesn’t require a lot of searching are firecrackers. It’s reported that firecrackers were invented in 10th-century China, not necessarily for entertainment, but to ward off evil spirits. In the centuries since, countries in Asia have continued the tradition of firecracker production, albeit evolving the process with advances in technology and innovative techniques. For Giudice, the inclusion of firecrackers made in China (prior to 1976), as well as examples from the short-lived period of American firecracker production, in his mostly American-made collection of fireworks, is part of staying true to the focus of his collecting efforts.

“I collect them because I consider them an integral part of the Fourth of July celebration,” he says. 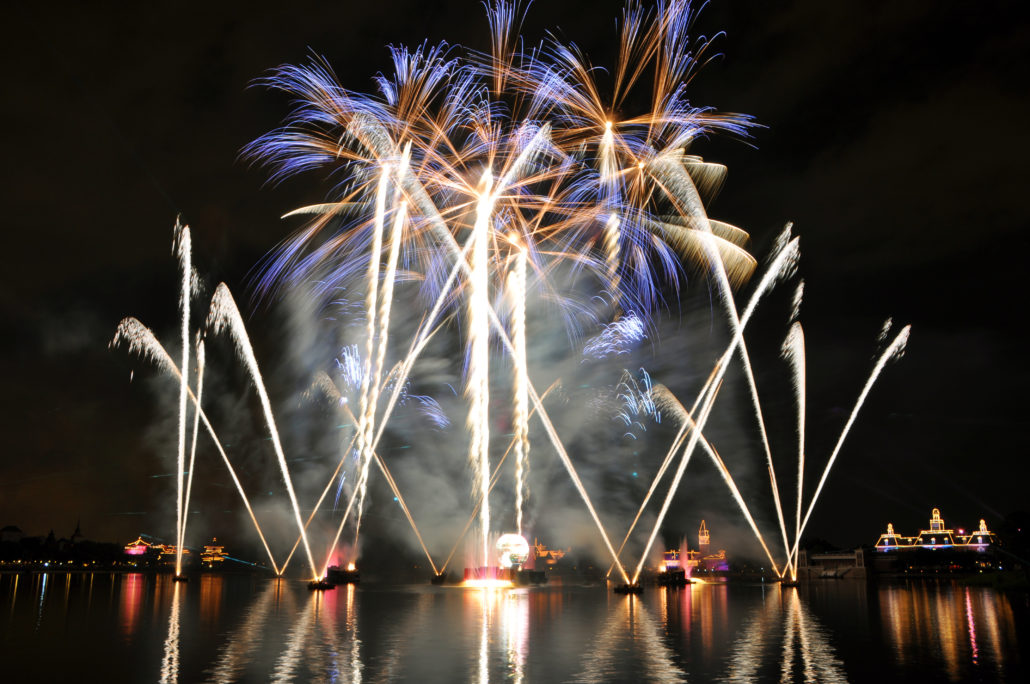 As it turns out, Giudice states, the most valuable item in his collection is a sealed brick (80 packs of 20 firecrackers each) of Navy brand firecrackers, copyright 1928, produced by the Hitt Fireworks Co. The company, according to The Book of Great American Firecrackers, invented the popular flashlight firecracker, known as Flashcraka. Recently, Giudice reports a brick of Navy brand firecrackers sold for $1,500, which makes this one of his best investments to date. Just like most collectors, realizing an investment was sound and may produce nice returns is a bit like fuel to a fire. Giudice understands that concept. Although the United States’ initial foray into firecracker production, courtesy of Mr. Gerhard who opened a firecracker plant in Greenville, New Jersey, in 1894, was short-lived, there were firecrackers produced by the plant. According to reports, Gerhard’s firecracker operation involving 60 workers could have produced as many as 50,000 firecrackers in a single day, Giudice says. Although this was half as much as China-based operations were producing in a day, with fewer workers at a lower cost of labor, the idea of finding and being able to acquire a firecracker from Gerhard’s plant is a dream of Giudice’s.

“There must be one out of there somewhere. I would love to get my hands on one,” he says. “Since I have never seen or heard of anyone possessing one, it just might be the Holy Grail of firecracker collectibles.” 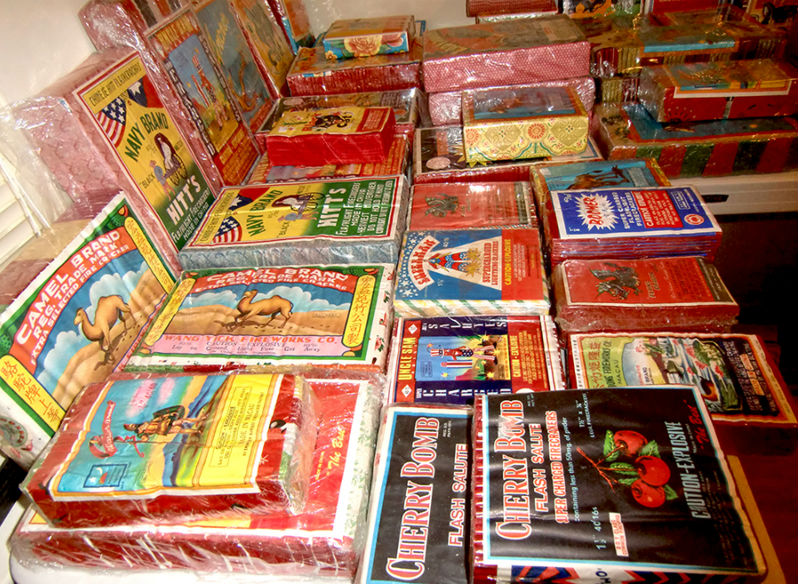 Before you begin wondering if vintage fireworks and memorabilia are within your collecting budget, Giudice shares some of his collecting tips.

Fireworks catalogs, labels and firework boxes are a great place to start, he says, adding that catalogs in very good to fine condition produced prior to World War II through the mid-1950s command the highest prices. The average price, based on condition, is $50 to about $200. Of the catalogs that consistently garner attention, those of the Unexcelled Fireworks Co. (logo was spelled UNXLED) are rare and often realize top dollar of $100 to $200, Giudice reports. Less rare, but known for its presentation (including occasional use of color pages) are catalogs from Spencer Fireworks of Ohio. Spencer catalogs often command between $60 and $130. Catalogs used from 1940 through 1945 may command higher prices, largely because of rarity — caused largely by wartime paper drives. Labels separated from the firecrackers have a broader range, with some available for less than $10 up to $500, with Class 1 (early 1900s) selling for the most, Giudice says.

Empty vintage firework boxes also provide fodder for starting or enhancing a collection. They may be labeled as holding salutes—as they were referred to in some fireworks catalogs—including Cherry Bombs, Globe Torpedoes, M80s and Super Bulldogs, among others. These boxes can range from $50 to $500, and is a collecting arena sometimes ripe with reproductions being sold as authentic items, Giudice warns.

“Original real boxes were manufactured prior to 1965 and most will obviously show their age—like most of us,” he says. “The box will likely have discoloring, small tears and ripped flaps. Aging is hard to fake, and if it is in very fine to mint condition, it’s most likely fake.”

As with any venture, collecting vintage fireworks is largely based on what you put into it. Committing to learning about the history and the evolution of production, adhering to laws and regulations, respecting the experiences and offerings of people you buy from, and being mindful of what brought you to this collecting interest to begin with all go into a positive experience.

“At some point back when I was young man, maybe 12 or 13 years old, I became curious as to why we were setting the night sky ablaze with skyrockets and Roman candles? Why were we making such a racket all day long?”

“Of course, as a kid you love the fireworks for the energy and excitement of the celebration. But eventually you find out why we celebrate and you love the Fourth of July all that much more.”

Here’s to all of us enjoying similar transformative experiences through collecting.

For more information about fireworks and to learn about the experiences of other fireworks collectors, revisit the July 22, 2015 issue of Antique Trader. Print and digital copies of that issue are available at KrauseBooks.com for $2: http://bit.ly/AT072215.

Special thanks to our friends at Antique Trader for sharing this content.