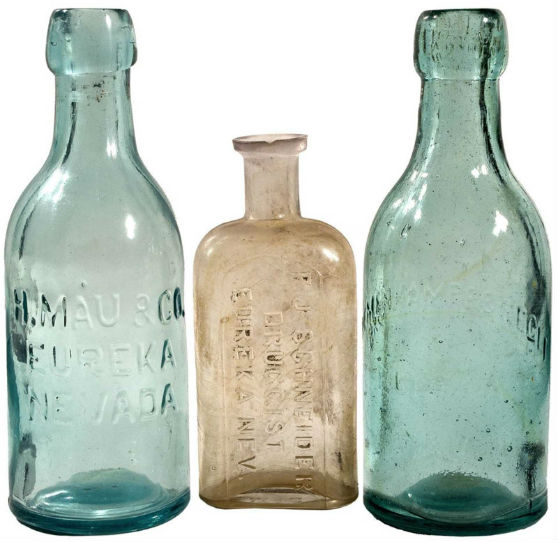 These bottles from Eureka, Nevada, are typical of those found buried in outhouse pits. The flask-type bottle (middle) is marked ‘F.J. Schneider, Druggist, Eureka, Nev.’ Schneider worked in Eureka from 1870 to 1893. Flanking the medicine bottle are blob-top soda bottles. Image courtesy of Holabird Western Americana Collections and LiveAuctioneers

YANKTON, S.D. (AP) – One man’s treasure may quite literally have been another man’s trash centuries ago.

Tom Askjem, of Buxton, North Dakota, is one of many who can attest to that statement. Askjem collects bottles, but not just any bottles. He collects antique medicinal bottles, and during his frequent digs in the South Dakota town of Yankton, he’s found numerous examples in old outhouse pits.

“I started a hobby called ‘bottle digging’ when I was about 12 years old on my parents’ farm with an 1898 farmhouse,” Askjem told the Yankton Daily Press & Dakotan. “I started digging around through some of the junk in the woods and found some 7-Up and Coca-Cola bottles. I drank a lot of soda as a kid, and I thought seeing the evolution of the container was interesting.”

Hoping to discover more old bottles, Askjem did some research into the different ways people go about it. He learned that many antique bottles are found in the outhouse pits behind early homesteads and houses, since that’s where trash was buried before the days of garbage pick-up and recycling. So, he asked his parents where the old outhouse was on their property.

“They told me the general area, but I don’t believe we found it until we were pushing around some stuff in the woods with a tractor and a bunch of stove ashes came up,” Askjem said. Stove ashes were often thrown over the use layer of an outhouse to neutralize the odor.

“Of course, after 100 years, there’s no smell left, but bottles were often thrown down the pits,” Askjem said. “I’m 27 now, so I guess I’ve been at this 15 years and I’ve dug almost 1,000 outhouse pits since then, most of them in the last five years.” 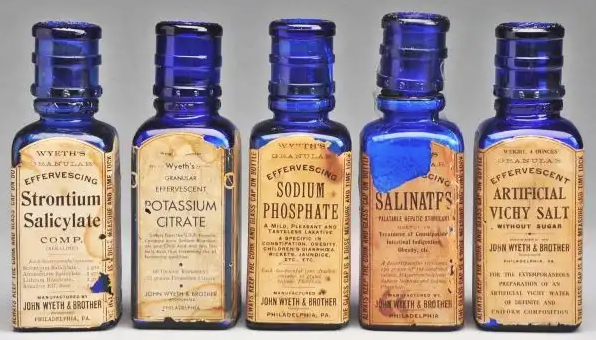 John Wyeth (Philadelphia) cobalt glass medicine bottles with labels intact. Had they been buried in an outhouse, their labels surely would not have survived. Image courtesy of Morphy Auctions and LiveAuctioneers

Askjem has found many different kinds of bottles, but typically medicine bottles. Some still have their corks and contain what was once laudanum or menthol, which he dumps out. Some have the pharmacy name embossed on the side, and these are the bottles Askjem seeks.

“I’ve got dozens of different kinds. I’ve dedicated a good portion of my life to this,” Askjem said. “Some of the bottles can have value. I get maybe a couple of hundred dollars’ worth of bottles per pit. I give a lot to the home owner; it gives them a conversation piece, so maybe $100 per pit.”

Askjem is mostly interested in antique bottles from the Dakotas, and spends about three weeks a year in Yankton on digs.

“‘Mother City of the Dakotas’ – that’s why I’m here, I’ve done a lot of digging up north, but I get some of the earliest stuff here,” he said.

“There are so many bottles out there. I learned this with years of collecting. I thought, ‘OK, I’m going to collect all the bottles from this state,’ to slowly find out that there’s more than I will ever be able to put on shelves in my house. So I just have to stick to the Dakotas, and even that’s sort of overwhelming.”

When figuring out where to dig, he goes off information from old maps, drawings or pictures of towns from 100 or more years ago.

“I push probe rods through the ground, and I feel for compaction. Where the outhouse pit was, there’s a telltale clay cap over the top,” Askjem said. “Underneath it is a bunch of stove ashes, and they loosen up and you can hear them crunching around, and then often I’ll hit artifacts.”

“Then I dig around and get the parameters of the pit, a lot of them around here are about 6-feet deep,” Askjem said.

One of his more recent digs in Yankton started out by studying an old drawing. The house was built in 1877 and is still standing. Askjem was able to figure out where to dig relatively quickly and during the course of digging down about 5 feet, he unearthed several broken bottles, some intact bottles, an intact glazed brown jug and an intact Edison-style bulb, among other things.

Some of his finds offer some mystery.

“I found a pair of brass knuckles in a pit in Crookston, Minnesota. I’m guessing it had a most interesting story behind it,” Askjem said. “A saloon fight or maybe a murder weapon, but here’s no way to find out.”

He also once found a pill bottle full of bills, silver coins, and silver certificates from the 1950s.

The earliest piece he found in Yankton was from the 1860s Civil War era.

“I’m writing a book on all the Yankton bottles, on all the different drugstores that put their names on them, the history of all that. I’m hoping this winter to put it together,” Askjem said. “I’ve found pieces of bottles I don’t have yet, but there are some collectors out there who have them, and they’re working with me. So they will send me pictures of stuff I don’t have and hopefully, between all of us, we’ll be able to get a complete book together.”

In the meantime, Askjem continues what is for him both a hobby and a calling: finding and unearthing his favorite artifacts of the Old West.