The 6553 Flower Basket in Ruby and Crystal was one of the most popular pieces from the Empress line. This basket has an engraved monogram “H” on one side. Image by Tom Hoepf

Listings for Tiffin Glass in antiques price guides always mention the company’s black satin glass produced in the 1920s, but in recent years collectors have paid more attention to its art glass made during the 1940s and ’50s.

It was an era of glassmaking in Tiffin marked by continued fine quality, brilliant colors and innovative designs. The most intriguing of these are loosely called Tiffin’s Modern lines.

1. Company President Charles W. Carlson introduced Swedish Modern, an interpretation of the simple, elegant forms that had earned Scandinavian glassmakers international acclaim. He was great fan of the Swedish glass and its modern look. 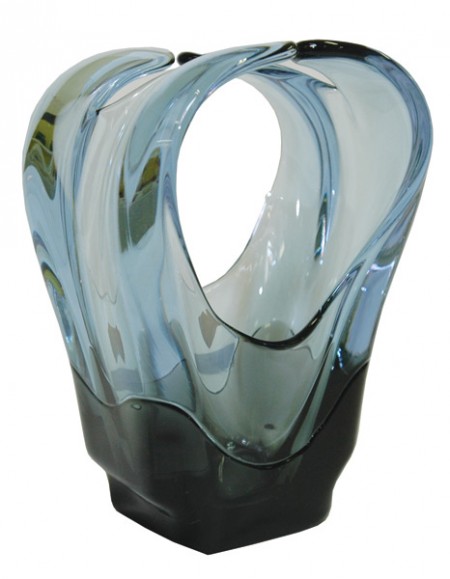 Tiffin’s popular Twilight color was paired with Smoke in this Empress line flower arranger, which is 8 inches high. Image by Tom Hoepf

2. To ensure Tiffin’s Swedish Modern was superior-grade glass, Carlson insisted on strict quality control, including the use of optical grade silica.

3. Carlson actually recruited glassmakers from Sweden to join Tiffin’s workforce. “They helped teach the Tiffin workers how to make this glass. They were influential and helpful as far as design and new techniques,” said Ruth Hemminger, former president of the Tiffin Glass Collectors Club. 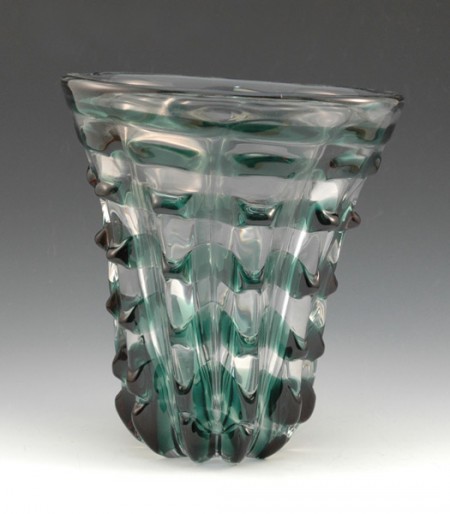 Crafting Tiffin’s Ribbon line of the mid-1950s entailed applying a colored ribbon of glass to the outside of a vase or bowl, reinserting the object into the mold and pressing the ribbon into the molded ribs. This 8-inch vase is in Green Fantasy, the most common Ribbon color. Image by Tom Hoepf

4. Complementing the bold crystal designs were Tiffin’s decorators, who often added engraving, etching and enameling. The book Tiffin Modern: Mid-Century Art Glass by Hemminger, Ed Goshe and Leslie Piña lists more than 30 glasscutters employed by the company, though much of their work was done on the company’s traditional crystal stemware. Throughout the 1940s Tiffin’s Sand Carved decoration was applied to vases and bowls using a sandblasting machine. Sand Carved decorations are most often floral themes, but dancers, nudes, a peasant girl and wild geese can also be found. 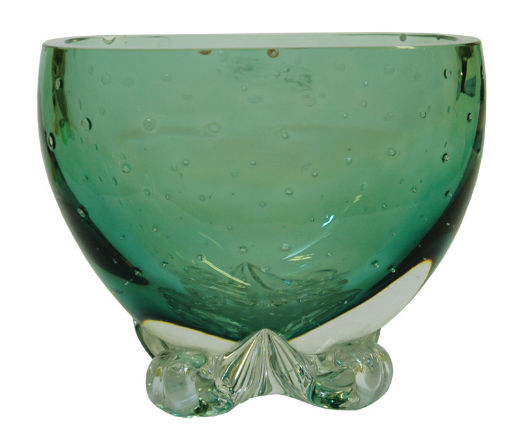 Tiffin’s pine color had a slight yellow cast and was in limited production from about 1952-1956. This Bubble Optic vase has a Manzoni foot. Image by Tom Hoepf

6. Tiffin Glass has been highly regarded for its colors. The palette in the 1940s included Amber, Cobalt Blue and Wistaria (pale pink to deep rose). Tiffin’s most famous color, Twilight (lavender), was introduced in 1951 and remained in production until the company closed in 1980. Under florescent lighting the color of Twilight changes to a pale blue. “Tiffin’s basic colors – Twilight, Wistaria, Copen Blue – are what people are looking for most,” said Hemminger. 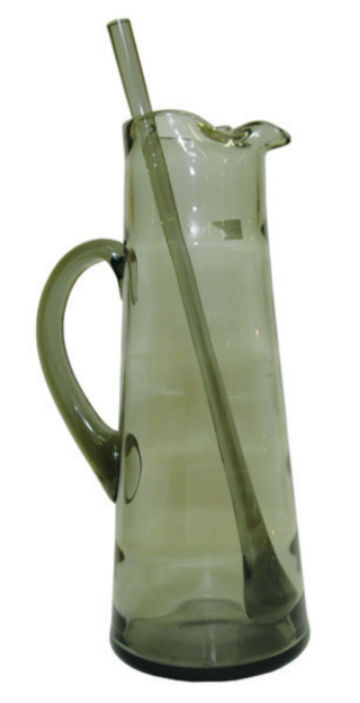 No alcoholic drink epitomized the modern lifestyle of the 1950s and ’60s like the martini. Tiffin made several sizes of Martini Jugs, this one in smoke with Tiffin Optic. Image by Tom Hoepf

7. Tiffin Modern glassmakers regularly made use of optics, handwork techniques to shape the glass, creating striking optical effects. Perhaps the most prominent was Swedish Optic, renamed Tiffin Optic in July 1946 to denote it was made in America. This optic appears as wide horizontal bands on the sides of vases and bowls.