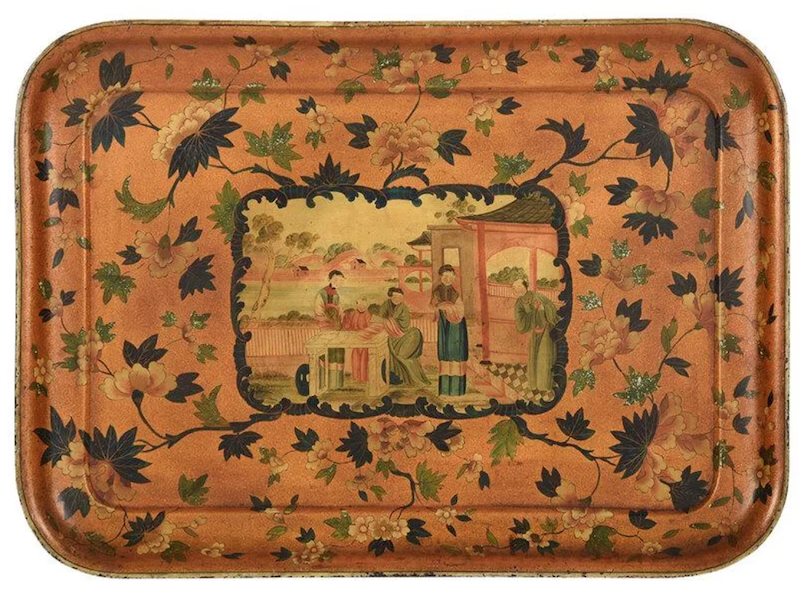 An English chinoiserie-decorated tole tray brought $3,000 plus the buyer’s premium in February 2021. Image courtesy of Brunk Auctions and LiveAuctioneers.

NEW YORK — December is unquestionably one of the most popular months for hosting parties. From company fetes at grand, historic locations to small gatherings of friends and families in the comforts of home, holiday entertaining is big business. Along with the shopping and cooking tasks, decorating is a prime consideration. Besides the usual holiday decor, there are certain things a smart host needs to stage a winning party. Among the pieces that can tick several boxes are antique trays.

An antique tray pulls double duty by serving food and looking good on dining tables and sideboards, but they can be used in other ways as well. A silver tray with ornate engraving can be stood on its side to provide a backdrop for a table arrangement, while a mahogany tray can be secured to a base to create a coffee table. Round, oval or rectangular trays placed on coffee tables, ottomans or a bar cart are good for displaying candles, flower vases or bar accessories in a way that is thoughtful and eye-pleasing. Some antique serving trays are pieces of art in their own right. 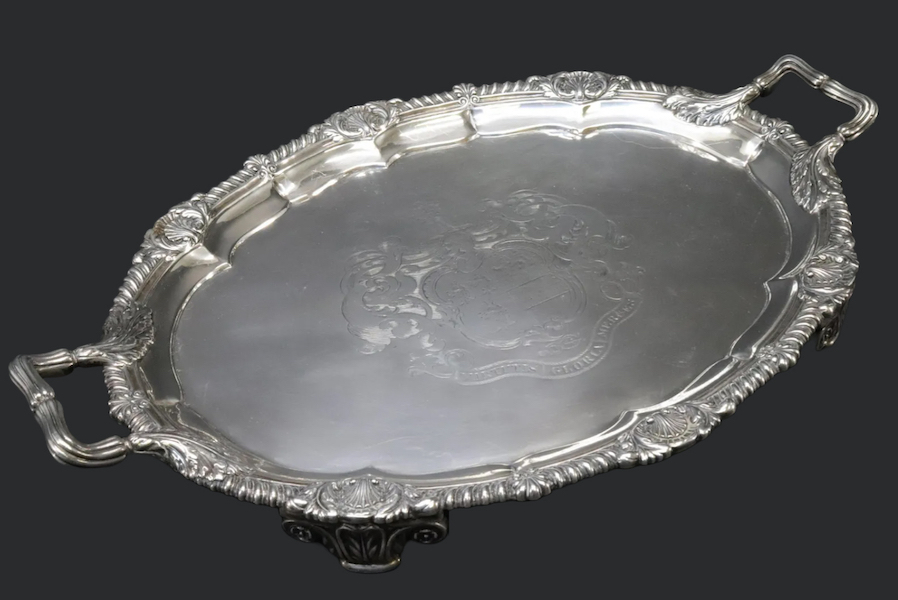 A Paul Storr George III tray, made in 1811, attained $15,000 plus the buyer’s premium in March 2021. Image courtesy of Litchfield Auctions and LiveAuctioneers.

Antique trays come in a gratifyingly wide range of styles, shapes and materials. Sterling silver trays have long been key tools for fancy entertaining and, with a little care, they can be kept functional and beautiful for years to come. A lavishly scrolled and gadrooned Paul Storr George III tray, having the crest for the Robertson clan of Scotland in its center, attained $15,000 plus the buyer’s premium in March 2021 at Litchfield Auctions. The two-handled tray, dating to 1811, has a leaf and shell border and is set on scrolled feet. Measuring a generous 21½ by 14 ½in, it is well-suited for parties.

Advertising serving trays were ubiquitous in the 19th and 20th centuries, and one of the most iconic varieties is the Coca-Cola tray, which debuted in 1897. At first, Coca-Cola trays were small and round, but their makers ultimately offered them in larger sizes as well as in oval and rectangular shapes. The early tray shown at the head of this story dates to 1897 and includes advertising slogans that read Delicious! and Refreshing! It achieved $50,000 plus the buyer’s premium in February 2019 at Michaan’s Auctions. 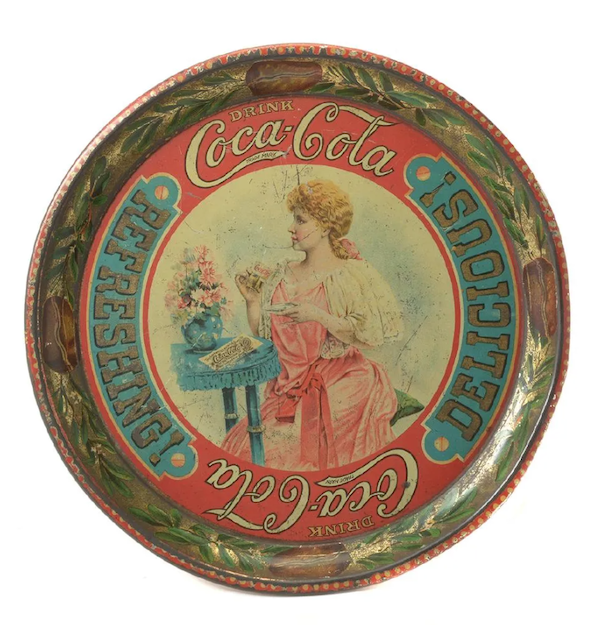 An original 1897 Coca-Cola tray achieved $50,000 plus the buyer’s premium in February 2019. Image courtesy of Michaan’s Auctions and LiveAuctioneers.

Multiple designs have been used by the Coca-Cola brand, with some trays bearing just the brand logo and no slogans. Coca-Cola also issued several versions of its metal serving trays featuring Santa Claus in the 1950s. These are generally more affordable as they were produced in larger numbers. An alert, reasonably patient collector can acquire one for less than a hundred dollars.

The Arts and Crafts aesthetic was loved in its time and remains so today. In recent years natural wood has gained a growing presence in homes in forms ranging from charcuterie boards to, yes, serving trays. A fine example of a mid-century natural-wood tray with a timeless style is a flipper-like Wharton Esherick-carved walnut serving tray that earned $6,000 plus the buyer’s premium in January 2017 at Rago Arts and Auction Center. 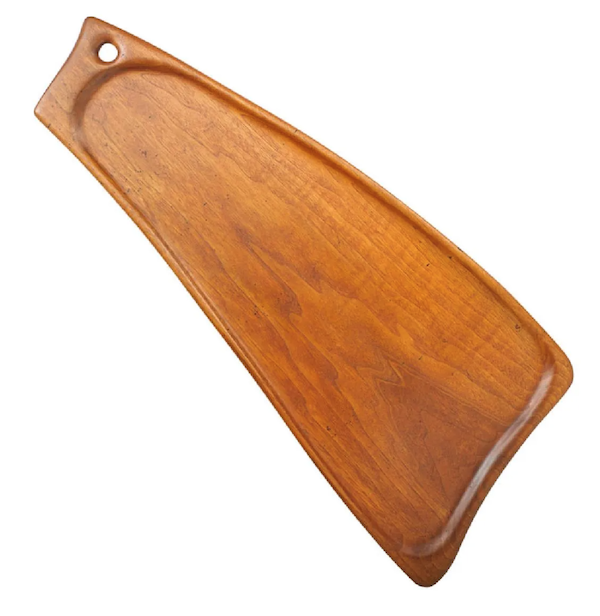 A Wharton Esherick-carved walnut serving tray earned $6,000 plus the buyer’s premium in January 2017. Image courtesy of Rago Arts and Auction Center and LiveAuctioneers.

Tole trays, a type of tin tray primarily produced in France, are cherished for the manner in which their enameled and painted designs pop against their painted metal backgrounds. The term “tole” is most commonly used to describe the decorated tin and iron objects made for the home in the 1700s to the 1900s. The technique of tole painting reportedly originated in Wales, though the French made it their own. Still lifes of fruit and floral designs might be the most popular imagery for tole trays. Tray background colors are typically black or red, but an unusual English chinoiserie-decorated tole tray with an orange background managed to draw $3,000 plus the buyer’s premium in February 2021 at Brunk Auctions. Made in the 19th-century, the rectangular tray is of a good size, about 22 by 30in, and graced with a cartouche showing Asian-styled figures surrounded with blossoms and branches. 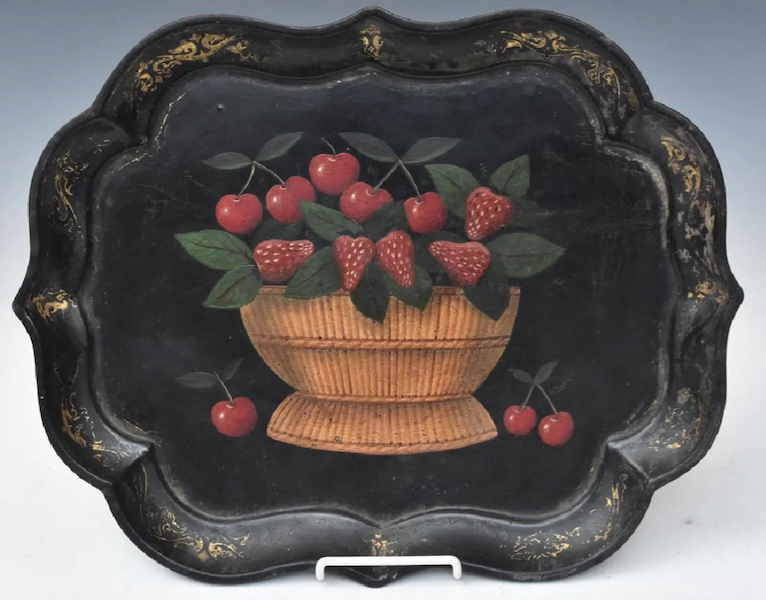 This papier-mache tray featuring a painting of a bowl of strawberries at its center sold for $800 plus the buyer’s premium in July 2017. Image courtesy of Fairfield Auction, LLC, and LiveAuctioneers.

Papier-mache trays are widely appreciated for the nearly endless variety of decorations and motifs they sport. One such example painted in the tole style with a gilt border and depicting a large bowl brimming with ripe strawberries realized $800 plus the buyer’s premium in July 2017 at Fairfield Auction, LLC.

Antique serving trays are available at every possible price point. With so many styles available, buyers are assured of finding the perfect one — or two, or five — for their home, and might even renew their ardor for hosting. After all, there’s no better way to enjoy a newly acquired antique serving tray than to show it off to your nearest and dearest. 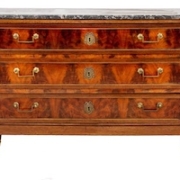 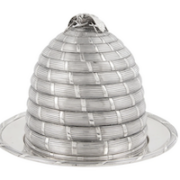 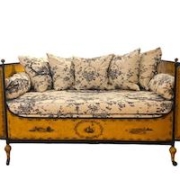 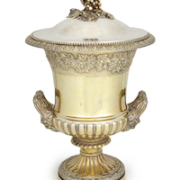 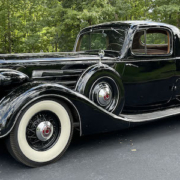 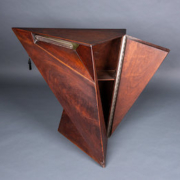 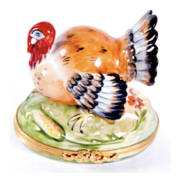