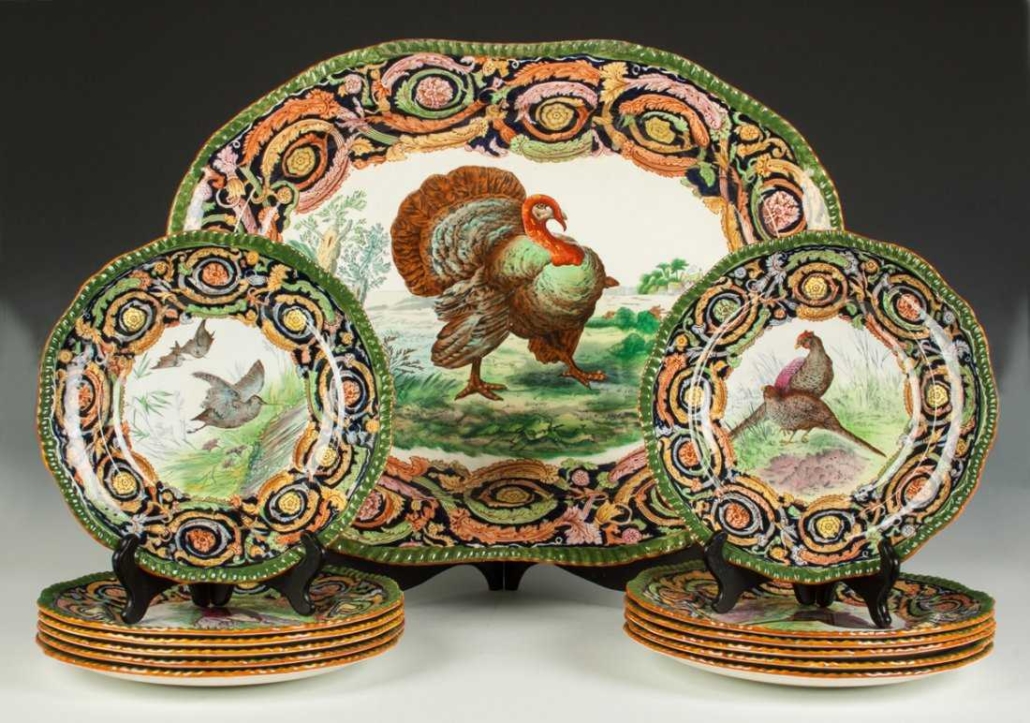 A Copeland Spode turkey platter with 12 dinner plates having game birds on the border brought $1,400 in November 2015 at Cottone Auctions. Photo courtesy of Cottone Auctions and LiveAuctioneers

NEW YORK — Holiday collectibles and antiques are are imaginative decorating alternatives for creating a memorable holiday table. Thanksgiving-themed antiques abound from serving platters in china and silver pieces to candy containers in the form of turkeys.

Colorful turkeys of papier-mache that are designed as candy containers are an eye-catching alternative to floral arrangements as a Thanksgiving centerpiece. Collectors gravitate to the early ones made in Germany, circa 1910-’40s, which were designed for the American market and usually have removable bottoms for adding/removing candy treats. Most range in size from about 4 inches tall to around 9 inches. A large example at 12½ inches tall, a German turkey candy container in papier-mache with metal feet and glass eyes went for $2,250 in April 2018 at Bertoia’s Auctions.

Also making a unique centerpiece is a Bradley & Hubbard turkey doorstop in cast iron with colorfully painted plumage, standing 13¼ inches tall. A circa-1920 example with finely molded and detailed plumage in nearly a full rainbow of hues sold at RSL Auctions in May 2016 for $1,300, while a more monochromatic version by the same company, standing about an inch shorter, earned $3,750 at Bertoia Auctions in April 2018. 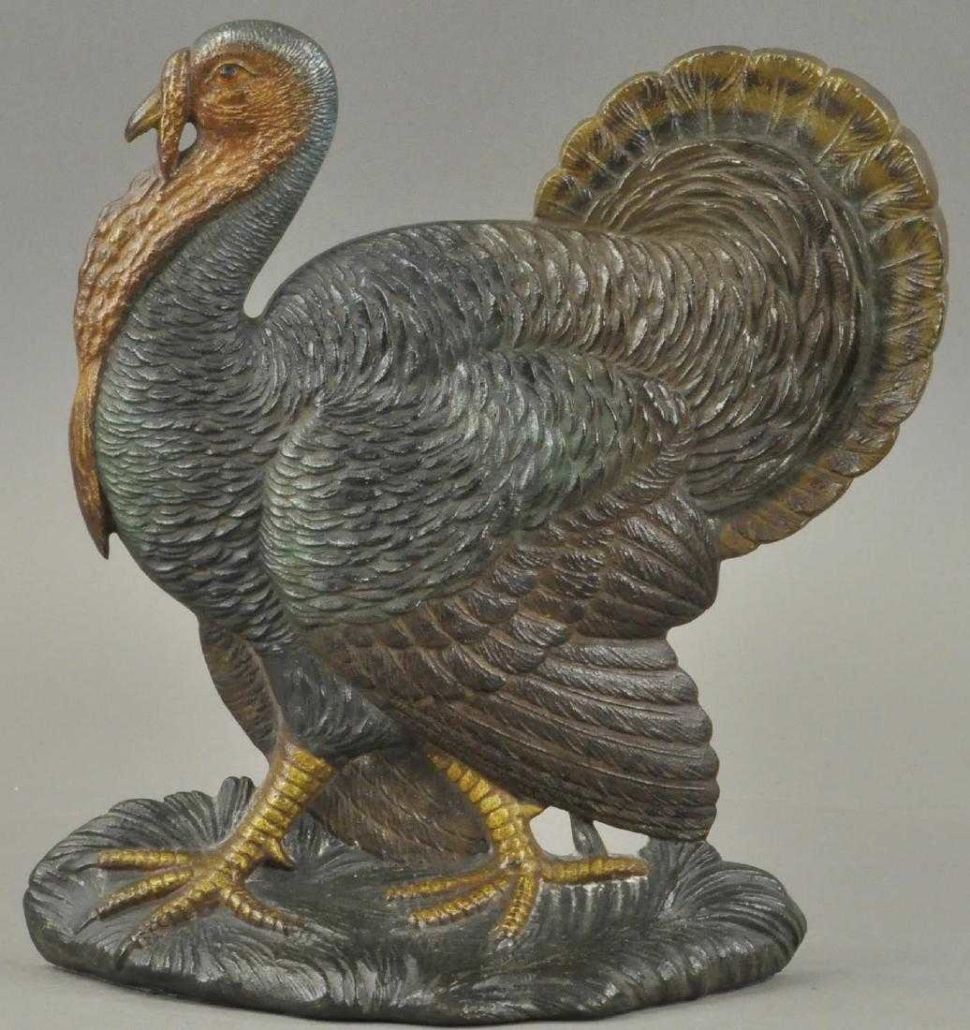 A Bradley & Hubbard cast iron doorstop of a wild turkey, 12½ inches tall, sold by Bertoia Auctions in April 2018 for $3,750, would make a fine table centerpiece. Photo courtesy of Bertoia Auctions and LiveAuctioneers

Gurley candles were made by Gurley Novelty in upstate New York starting in 1939. The company had candles for most every holiday, including a turkey and a Pilgrim boy and girl for Thanksgiving. Rarer still are their ships fashioned as the Mayflower. Some were sold under the brand of Tavern Novelty Candles, and each one was said to have been made by hand from molds, selling between ten cents and a dollar at the time. On the Internet, they can now bring $30 and up. Many period Gurley and Tavern candles are available on the market, as most people who bought them did not burn them, thinking them too attractive to use. Carved and painted wooden Pilgrim candlesticks are also highly collectible.

For ephemera collectors, Thanksgiving postcards are perhaps more subdued and less colorful than Halloween and Christmas cards, but just as charming. Black and white-clad Pilgrims crowded around a food-laden table or American Indians plucking a turkey evoke all the mythology of the “first Thanksgiving” in 1621 with the Pilgrims and the Wampanoag Indians breaking bread together. 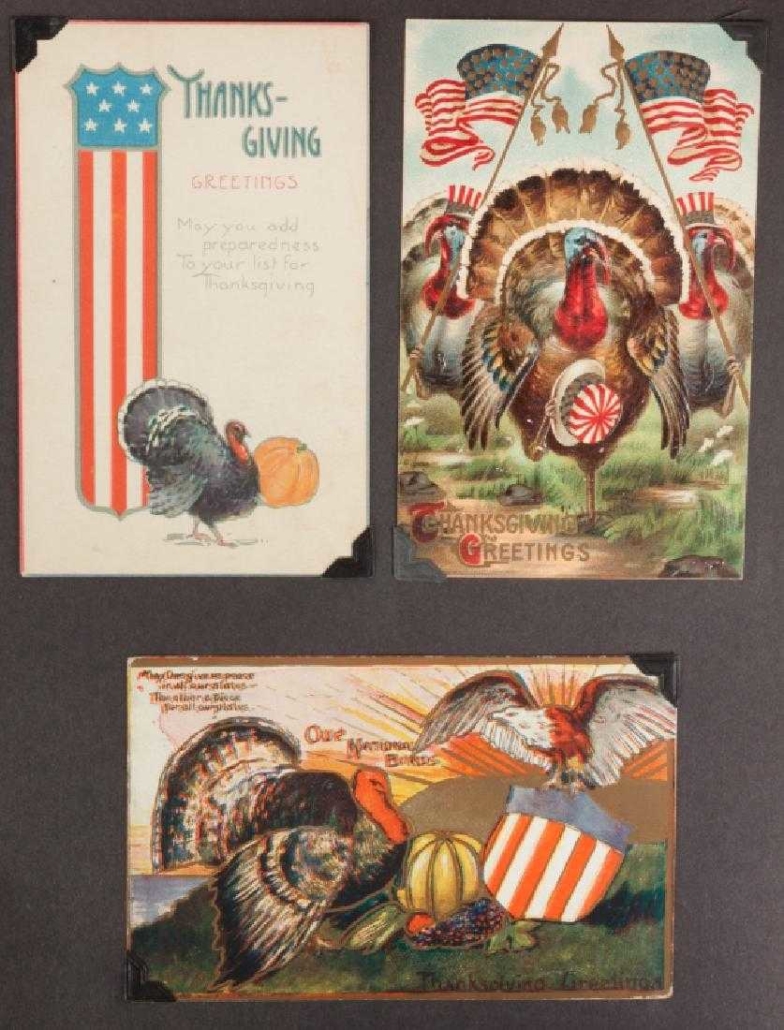 Titled “A Peaceful Thanksgiving,” a 1914 postcard created by renowned postcard artist Samuel L. Schmucker depicts a Pilgrim woman and man saying grace before their meal. The card was printed in Germany and published by John Winsch. Schmucker’s works are usually unsigned although he sometimes added his initials of S.L.S. to his cards. His style is easy for veteran card collectors to spot with a high level of detail, warm and vibrant colors, and fine brushwork. 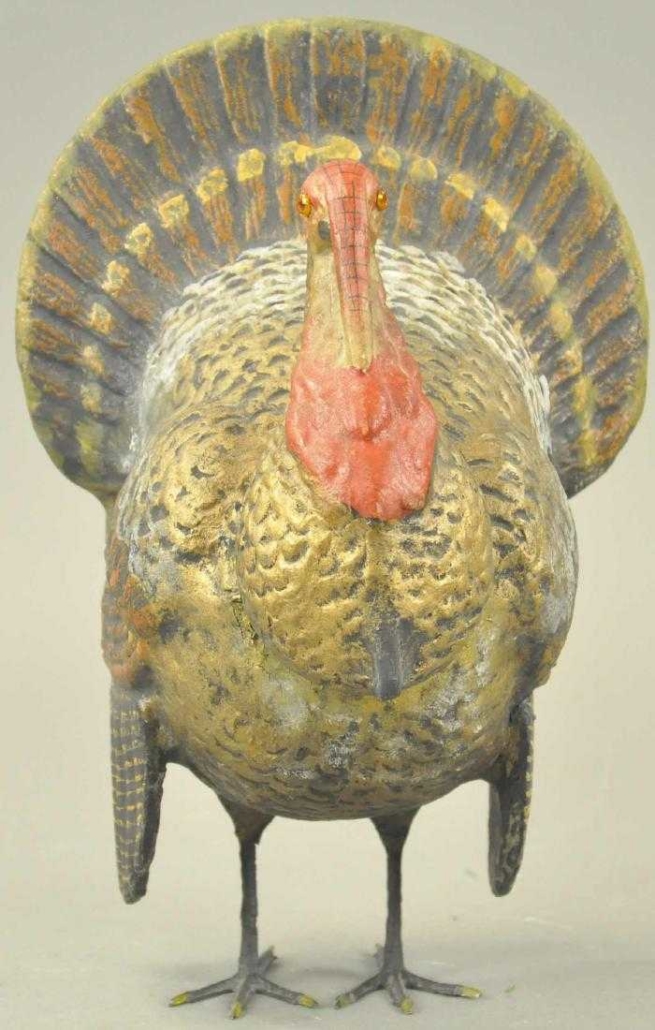 Thanksgiving collectibles on paper are led by Currier and Ives hand-colored lithographs, which are as much a part of American culture as baseball or the Stars and Stripes, and have graced many homes in the last century. One of the company’s most beloved and well known scenes was the 1867 litho, Home to Thanksgiving, designed by John Schutler, which depicts a city man returning to his childhood home in the country on a snowy day to be greeted by his parents. Modeled after a painting by George H. Durrie, an example of this famous work realized $4,250 in June 2014 at Arader Galleries. 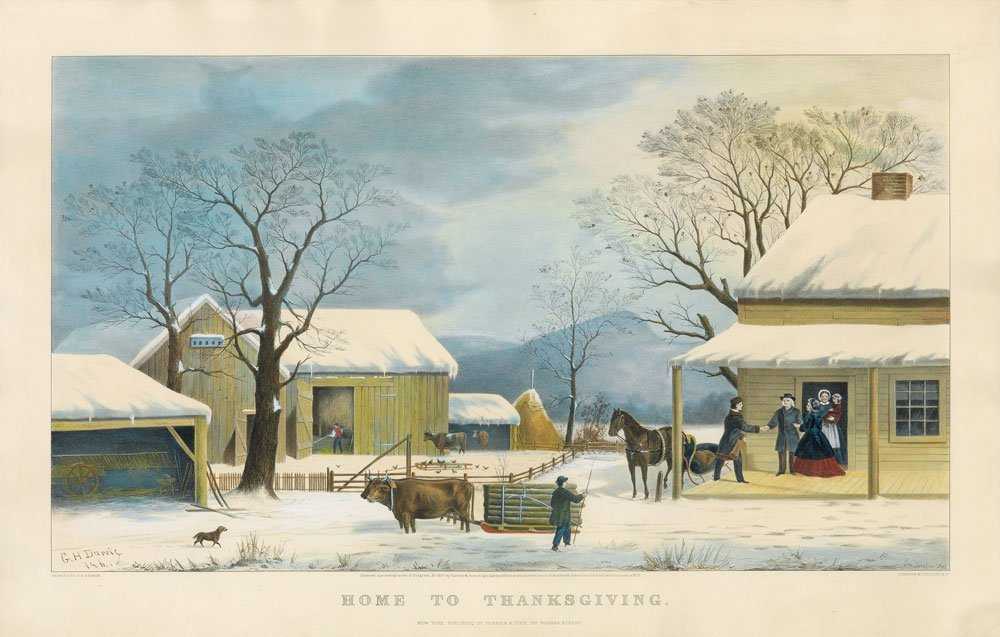 When it comes to setting the table, several china manufacturers created patterns especially for the holidays, such as Copeland Spode, which made a turkey platter service having a large and colorful turkey in the center that was offered with dinner plates decorated with various other game birds. (See photo at top of page) Royal Doulton had several different lines of turkey plates. Flow blue platters are also popular from makers like Wedgwood, Salem Group or Cauldron, featuring tom turkeys in cobalt blue decoration, usually set in a grassy scene and with a floral border.

And when it comes to serving up the turkey, don’t overlook the beauty of fine silver. An ideal choice, a 19th-century Sheffield silver plate turkey dome and underplate, 16 inches tall by 23 inches wide, sold for $1,500 in January 2017 at Langston Auction Gallery.

From setting a mood of simple elegance to ornate extravagance, decorating with antiques can make Thanksgiving even more special than it already is. 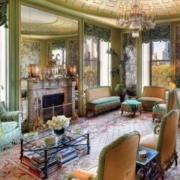 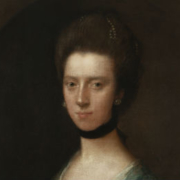 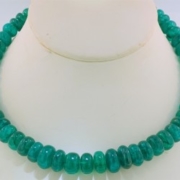 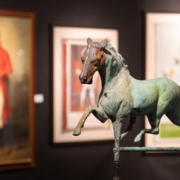 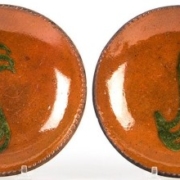 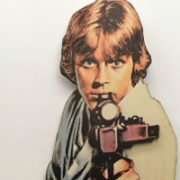 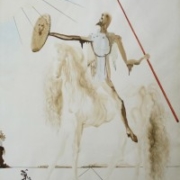 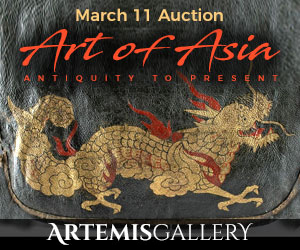