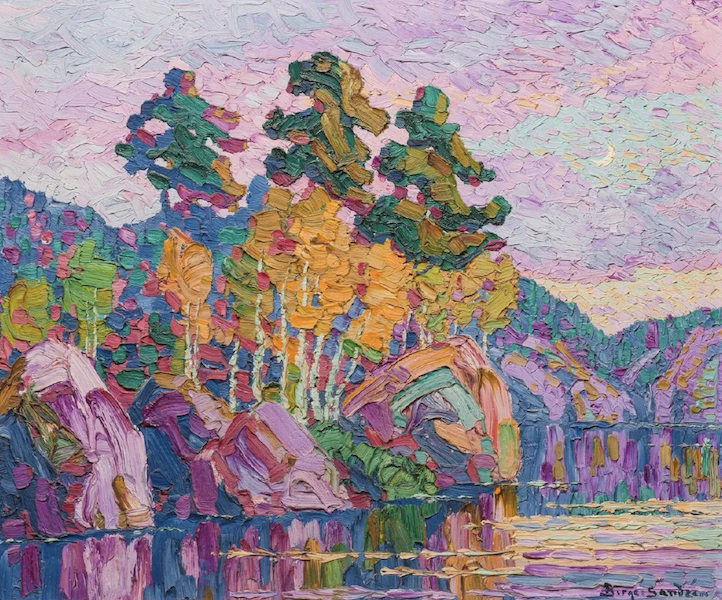 NEW YORK – When you see your first Birger Sandzen painting, your brain performs an obvious, unmistakable swivel. First, you think, “That looks like a Van Gogh,” followed by the quick realization, “Van Gogh never left Europe.” Your brain is right. Vincent Van Gogh never left Europe. Birger Sandzen did, however, and he unleashed his considerable talents on the landscapes of middle America, finding color and vivacity in the plains of Kansas and the mountains of Colorado.

Comparisons to Van Gogh faintly annoyed Sandzen. In a 1924 letter to one of his brothers, after he returned home from what proved to be his last trip to his native country of Sweden, he stated, “I saw my first Van Gogh original this year.” Sandzen had established his mature and most-favored style by then. But Cori Sherman North, curator at the Birger Sandzen Memorial Gallery, made a keen and telling observation: “The trip obviously changed his palette. He got home to Lindsborg and stopped using black.” 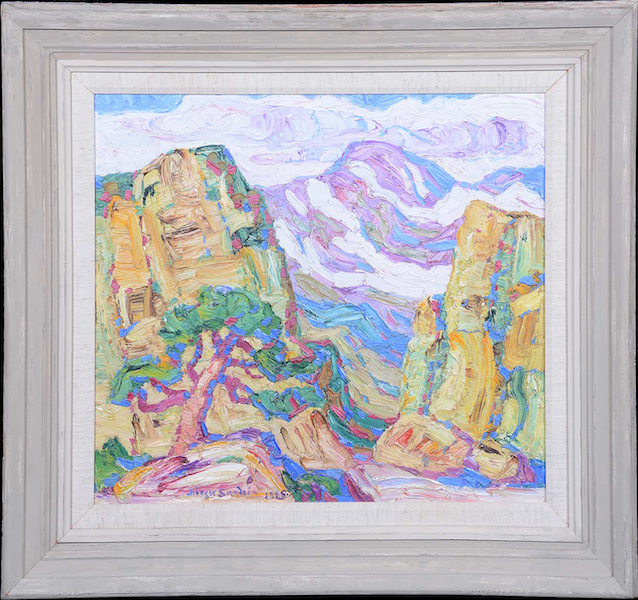 A 1925 Birger Sandzen oil on board titled ‘The Gate – Rocky Mountain National Park, Colo,’ realized $95,000 plus the buyer’s premium in February 2017. Image courtesy of Woody Auction LLC and LiveAuctioneers

Born Sven Birger Sandzen in Blidsberg, Sweden in 1871, Sandzen (his first name is pronounced “Beer-year” if you’re Swedish or “Brr-ier” if you’re American, and everyone pronounces his last name as “Sand-ZANE”) enjoyed a trajectory that was really only possible in the late 19th century, and he made the most of it. He trained under fellow Swede Anders Zorn, one of the artistic luminaries of the age, and went to Paris to learn from Pointilist Edmond Aman-Jean. On a visit home in June 1894, Sandzen encountered the work that would change his life – not a painting, but a book by Carl Swensson, a Swedish man who led Bethany College, an institution located in Lindsborg, Kansas. Sandzen plucked up his courage along with a pen and wrote to Swensson, cataloging his talents and his experience and asking for a job. One month later, Sandzen received an answer: Yes. The 23-year-old sailed for the United States in August 1894, little suspecting he was at the dawn of a long, happy teaching career that would last more than five decades.

Sandzen was initially hired as a language instructor for French, Swedish and German, but he made an immediate connection with his colleagues in Bethany’s art department. By 1899, Sandzen had been appointed as principal art teacher, and he would become the department head as well, holding both roles until he retired in 1946. He taught hundreds of students, making art all the while. He was impressively and almost absurdly prolific. The lifetime tally reported by the Birger Sandzen Memorial Gallery (BSMG), located on the Bethany College campus in Lindsborg, counts more than 2,600 oil paintings; 500 watercolors; 207 lithographs, 94 block prints and 27 drypoints, which together yielded more than 33,000 prints; and more than 80 sketchbooks full of drawings. 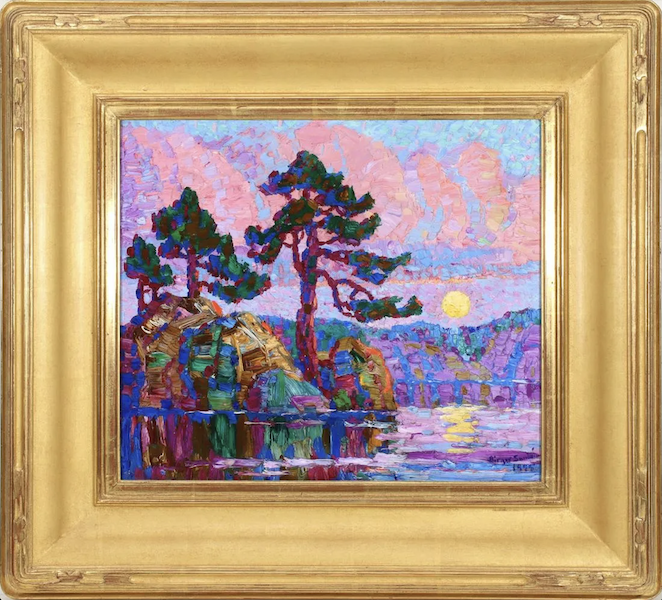 ‘Lake at Moonrise, Colorado,’ a 1925 work by Birger Sandzen, earned $140,000 plus the buyer’s premium in April 2021. Image courtesy of Soulis Auctions and LiveAuctioneers

Sandzen’s paintings radiate a love of nature that is deep and undeniable, and their magnificent color palettes present a visual paradox, seeming both impossible and true at the same time. His Kansas is not the grim, dishwater-dull world Dorothy Gale inhabits in the 1939 film The Wizard of Oz. If anything, his depictions of the state better explain why Gale spurned Oz in the belief that there was no place like home. And his renderings of the wilds of Colorado, particularly those set at twilight, are simply breathtaking. Even if they are presented old-school salon-style, on a tall wall crammed frame-to-frame with canvases, they make you stop, look and wonder. 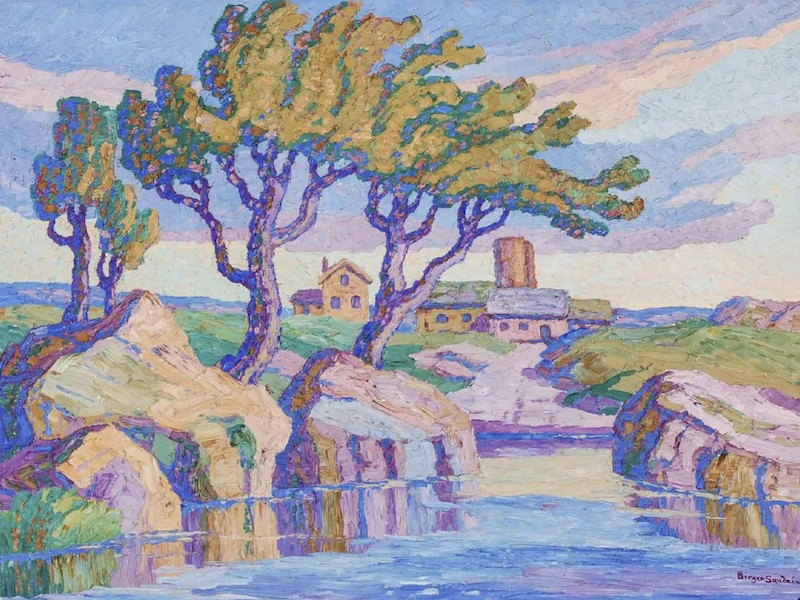 Birger Sandzen painted ‘Between Showers, Lindsborg Kans 1935’ as a gift to the Lyons, Kansas School District. It sold in June 2017 for $63,000 plus the buyer’s premium, and the proceeds of the sale endowed senior scholarships in the district. Image courtesy of Soulis Auctions and LiveAuctioneers

In 1927, at the height of his artistic powers, Sandzen gave insight into his thoughts on color: “All color in nature is stronger than anything one can possibly have on the palette. For instance, the white of the moon-beam or the vividness of the newly opened flower,” he said, adding, “There can be no danger of exaggerating nature’s color.” 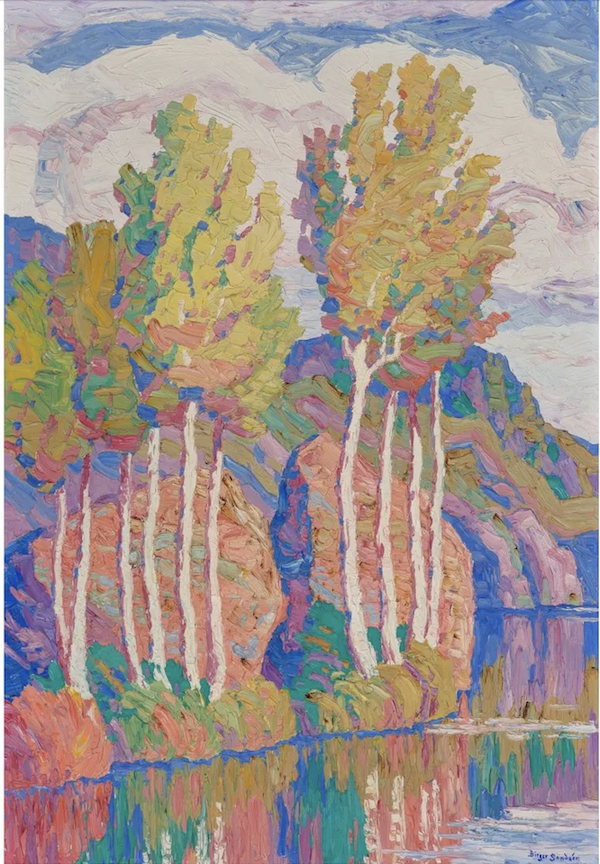 There can be no danger of exaggerating the strength of Sandzen’s market, either. Though he has yet to be showcased in a retrospective or solo show at a major museum on either U.S. coast since his lifetime, fans of Western art haven’t hesitated to pounce on great Sandzen canvases. Senior Vice President of American art at Heritage Auctions Aviva Lehmann stated on email that demand for his works is headed “UP! UP! UP!,” deliberately using all caps and exclamation points for emphasis. She recalls a client flying in on his private jet to personally view a 1930 Sandzen titled Aspens, Rocky Mountain National Park, Colorado, which ultimately sold in May 2021 for $180,000 plus the buyer’s premium.

The Dallas-based auction house set the record for the most-expensive Sandzen at auction: Lake at Sunset, Colorado, which achieved the sum of $670,000 in May 2016. Lehmann bluntly states, “It was the best Sandzen to ever come to market,” and gave some of the credit for the record-setting result to the painting’s monumental size of 80 by 60in. The subject, the color palette, and the quality of its surface all mattered as well, she added, noting: “Sandzen successfully captured that firey sky one only sees at sunset – that magical moment that fades quickly … the surface was so thick, so luscious with its impasto, that it almost felt sculptural.” 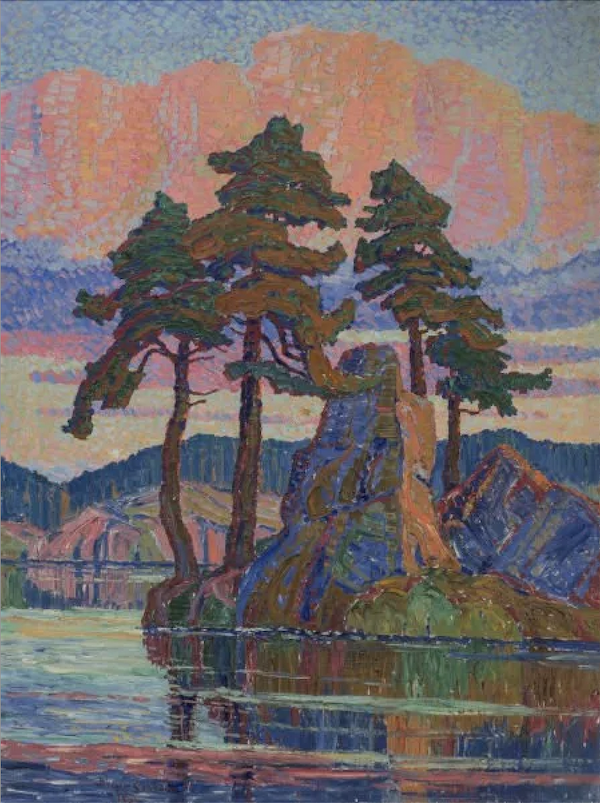 ‘Lake at Sunset, Colorado,’ an unusually large Birger Sandzen work at 80 by 60in, commanded $670,000 in May 2016 and still holds the world auction record for the artist. Image courtesy of Heritage Auctions and LiveAuctioneers

“Sandzen is firmly in our wheelhouse at Heritage, and what we call a crowd favorite,” Lehmann said, explaining, “We often cap the number of works by any particular artist offered in one sale, to keep the offerings low and the interest high, ultimately leading to strong prices, and happy consignors. Aside from perhaps J.C. Leyendecker or Norman Rockwell, Sandzen is one of the only artists whose work we can offer in larger quantities, because our interested client base is so strong.”

Sarah Campbell Drury, vice president of fine and decorative arts at Case Antiques Inc., Auctions & Appraisals in Knoxville, Tennessee, has only handled one Sandzen, and dearly hopes that number will increase. It was a doozy, however. Twilight, painted in 1927, achieved $97,200 in August 2017. Campbell Drury believes if she had it back to sell today, it would easily break $100,000 and might approach $150,000.

Twilight, the record-setting Heritage work and the 1930 Sandzen painting a bidder flew in to see in person all share repeated details in common. “As we look at his paintings, it’s clear that when we have a mountain landscape plus twilight plus water – that’s the trifecta for his work,” Campbell Drury said. “You get multiple colors and reflections. And it seems the bigger the canvas, the bigger the price. When you have a big one that matches the bigness of the Western landscape, it’s really desirable and you see high prices being paid.” 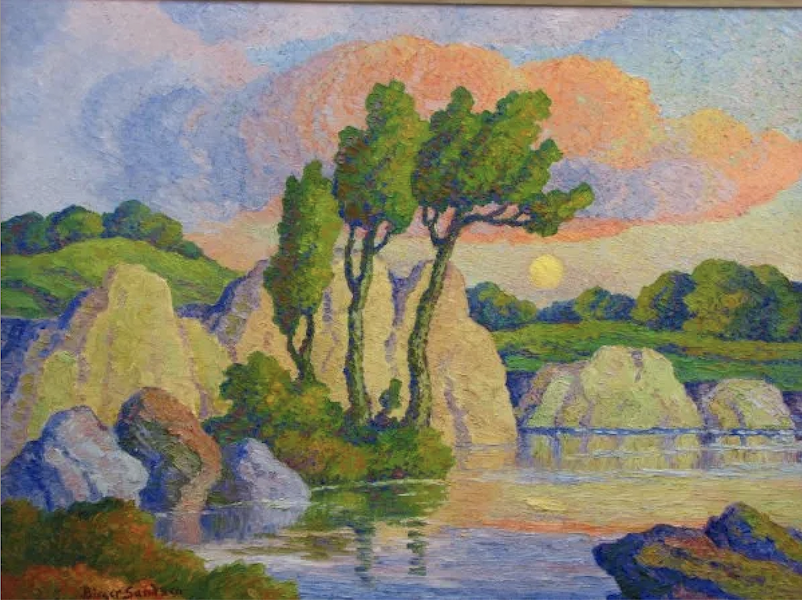 Birger Sandzen’s ‘Wild Horse Creek,’ a circa-1945 work, brought $107,000 plus the buyer’s premium in June 2010. Image courtesy of Soulis Auctions and LiveAuctioneers

While Campbell Drury nailed key aspects of a successful Sandzen, there’s a fourth factor in play. In June 2021, Dirk Soulis of Soulis Auctions in Lone Jack, Missouri offered Wild Horse Creek, a circa-1945 painting of a Kansas landscape near a farm owned by Sandzen’s parents-in-law. The oil on panel earned $107,500 plus the buyer’s premium. “I think it checked a lot of boxes,” said Soulis, who always serves as the auctioneer of his sales. “There were the strong colors in the clouds at the top and top right, the size was desirable, the provenance satisfied any questions, and we did a fantastic job promoting it. Oh, and the moon, did I mention the moon?” Cori Sherman North of the BSMG affirmed Soulis’s observation: “If there’s a moon in the picture, add a big percent to the sales estimate.”

Sandzen stands out for yet another reason. As his reputation as an artist grew, and his work was requested for display in shows and exhibitions across the country, he handled the attendant administrative tasks himself, evidently never feeling tempted to recruit his students to help. A 1993 Sandzen biography by Emory Lindquist states the artist “sent so many of his paintings, water colors, and prints from the small town of Lindsborg to famous museums and galleries and to lesser known places, doing so without a professional agent and the support of a local metropolitan press … it was accomplished, moreover, in the midst of a busy schedule of teaching, lecturing, and writing with no secretarial help. The record books of exhibitions and extensive correspondence of all types are in his own handwriting. Often he packed the materials for exhibition and carried them to the post office for mailing.” 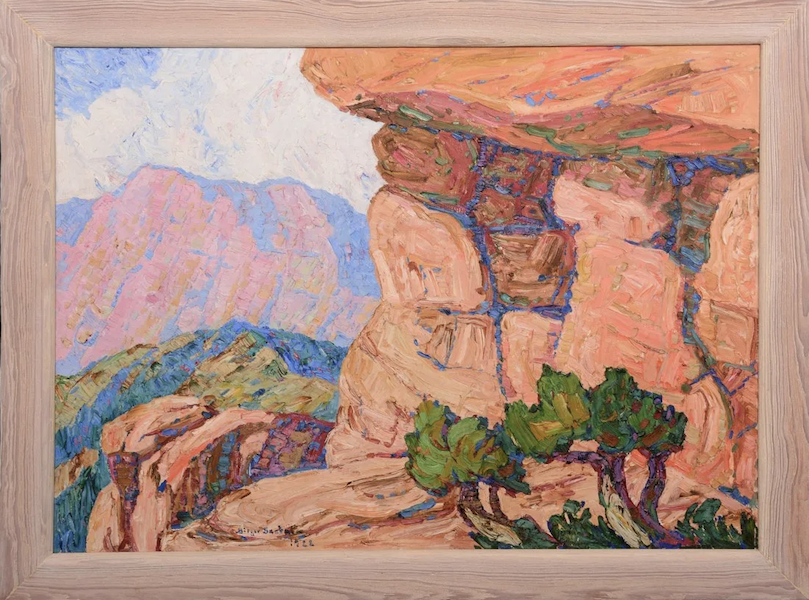 In 1924, following mishandling at an exposition, Birger Sandzen personally repaired his 1922 canvas, dubbed ‘Cedars and Rocks.’ When it was auctioned in February 2018, it attained $160,000 plus the buyer’s premium. Image courtesy of Woody Auction LLC and LiveAuctioneers

Jason Woody of Woody Auction in Douglass, Kansas auctioned a Sandzen that had been personally repaired by the artist after it was damaged at an exposition. Cedars and Rocks, a 1922 oil on canvas, sold for $160,000 plus the buyer’s premium in February 2018, and its backstory helped drive the price. “It was documented to have been shown at an exhibition he did, and it was damaged at one of his shows and you could see the repair on his painting,” Woody said. “That was great information to have. Having all that documentation is always a plus.”

A few years before his death, Birger Sandzen painted ‘Twilight on the Smoky,’ an oil on Masonite measuring 48 by 144in. It achieved $150,000 plus the buyer’s premium in November 2021. Courtesy Heritage Auctions and LiveAuctioneers

Sandzen is among a handful of artists for whom the buyer’s and the seller’s markets are both strong and likely to remain so for the forseeable future. “Some artists have a few good paintings. That’s not him. He had a lot of good paintings. You’re more likely to get a really good Sandzen than you would another artist,” said Campbell Drury. “One reason some like to collect him is you don’t have to wait 10 to 20 years for a good one to come along.” 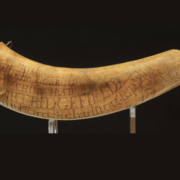 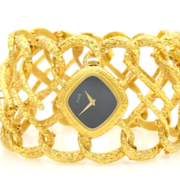 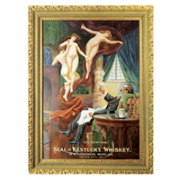 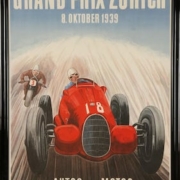 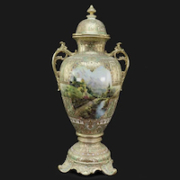