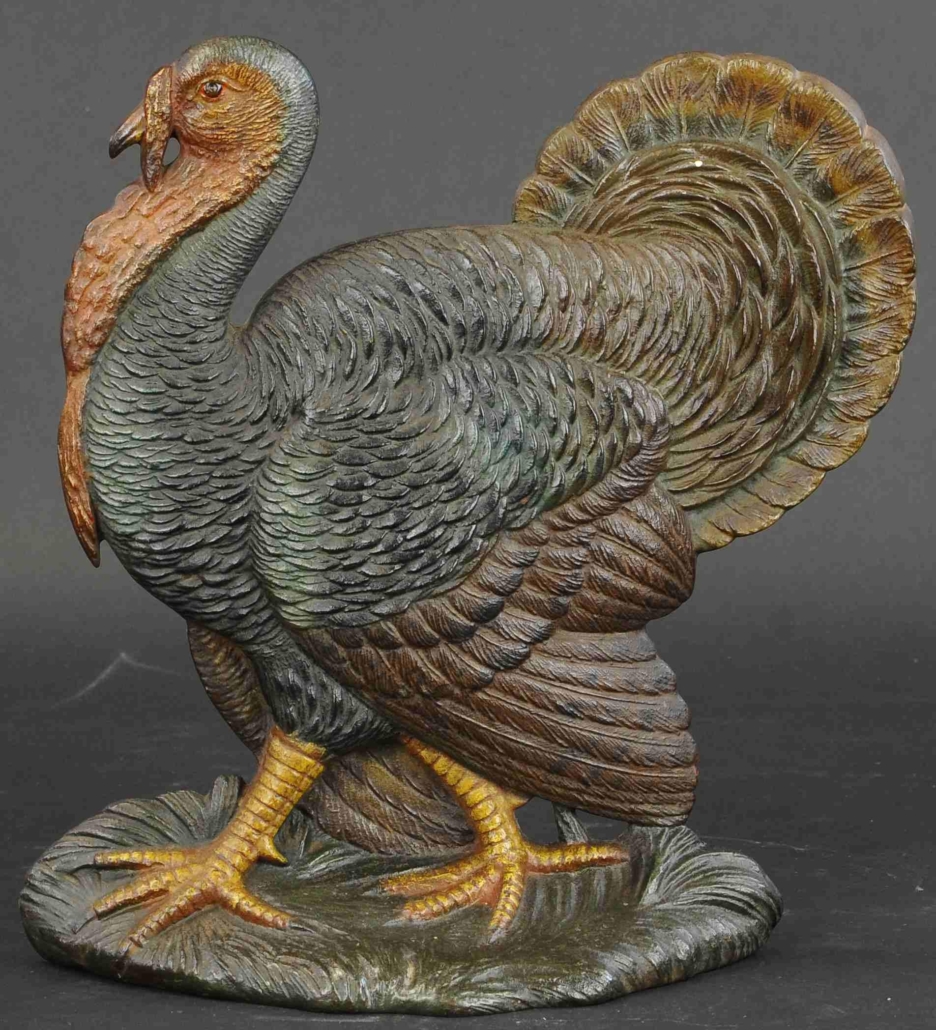 NEW YORK – Founded in 1852 in West Meriden, Conn., Bradley & Hubbard (B&H) metal decorative objects gained and held their popularity throughout the company’s 90-year existence. From brass and bronze goods to cast-iron figures, the firm, originally known as Bradley, Hatch & Co., was well known for its clocks, andirons, sewing birds and other objects before it found a niche in the 1870s with kerosene-burning light fixtures cast-iron doorstops. 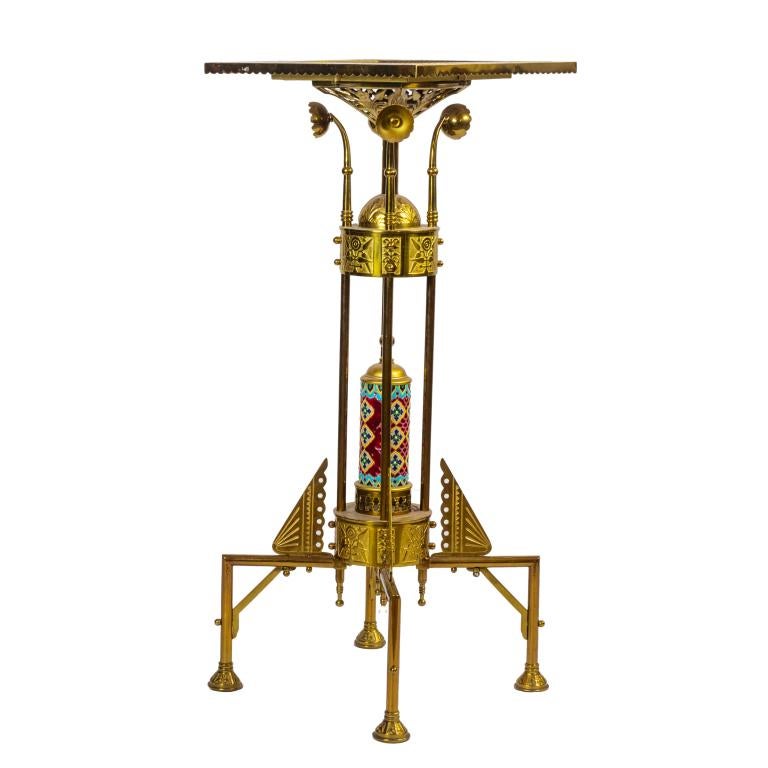 Bradley & Hubbard was well known for its metalware such as this Aesthetic Movement brass stand with a Longwy pottery insert. It realized $6,000 + the buyer’s premium in February 2020. Photo courtesy of Hill Auction Gallery and LiveAuctioneers

Many of its Aesthetic Movement-period metal items were heavily ornate. As a result of their products’ artistic merit and quality, B&H was able to position itself at the high end of the decorative items market. The company grew from being a small business with just six workers to having over 1,500 employees and offices and salesrooms across the Northeast. In 1875, the company reorganized again and came to be known as Bradley & Hubbard Manufacturing Co. Nearly 200 of its designs are in museum collections throughout America. 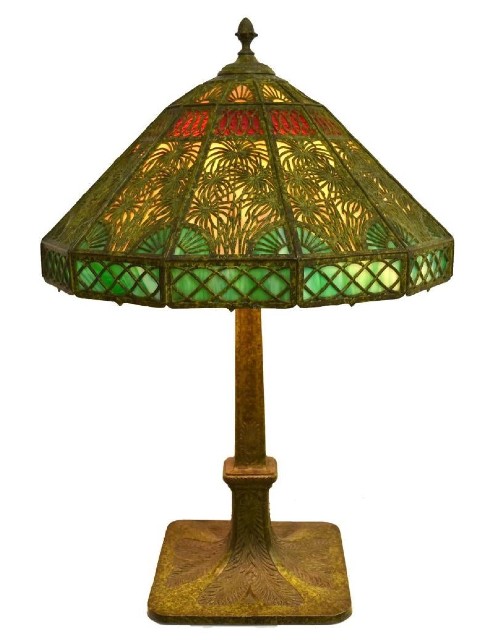 By 1940, however, the company was bought out by the Charles Parker Co. Bradley & Hubbard remains closely associated with high-quality items that are highly collectible today, especially its lamps, clocks and doorstops, which have been described as the Tiffany of doorstops.

Bertoia Auctions’ owner, Jeanne Bertoia, is a renowned authority on figural cast-iron doorstops. She has championed the specialty as a collector, seller, and influential author of the definitive reference book titled Doorstops – Identifications & Values. Bertoia says B&H doorstops are among her favorites. The company is known for its “outstanding quality castings, the great subject matter and the attention to detail,” Bertoia said. Besides their quality, these doorstops are recognizable for the B&H logo on its back and the two rubber stops on the back (to prevent damage to the door). Most of their doorstops, save the large ones, have a pebbled surface on the back side. The large ones will be marked B&H followed by a four-digit number. Their large Owl doorstop, which stands 15¾ inches, is marked B&H 7797 for example.

Bertoia is especially drawn to its large animal-form doorstops, ranging from about 11½ inches to nearly 16 inches tall. Citing her top picks as being the Turkey (see example at top of this page), Heron, Rabbit and Owl, she noted that these are the largest the company made. “Those are probably the most desirable ones.” 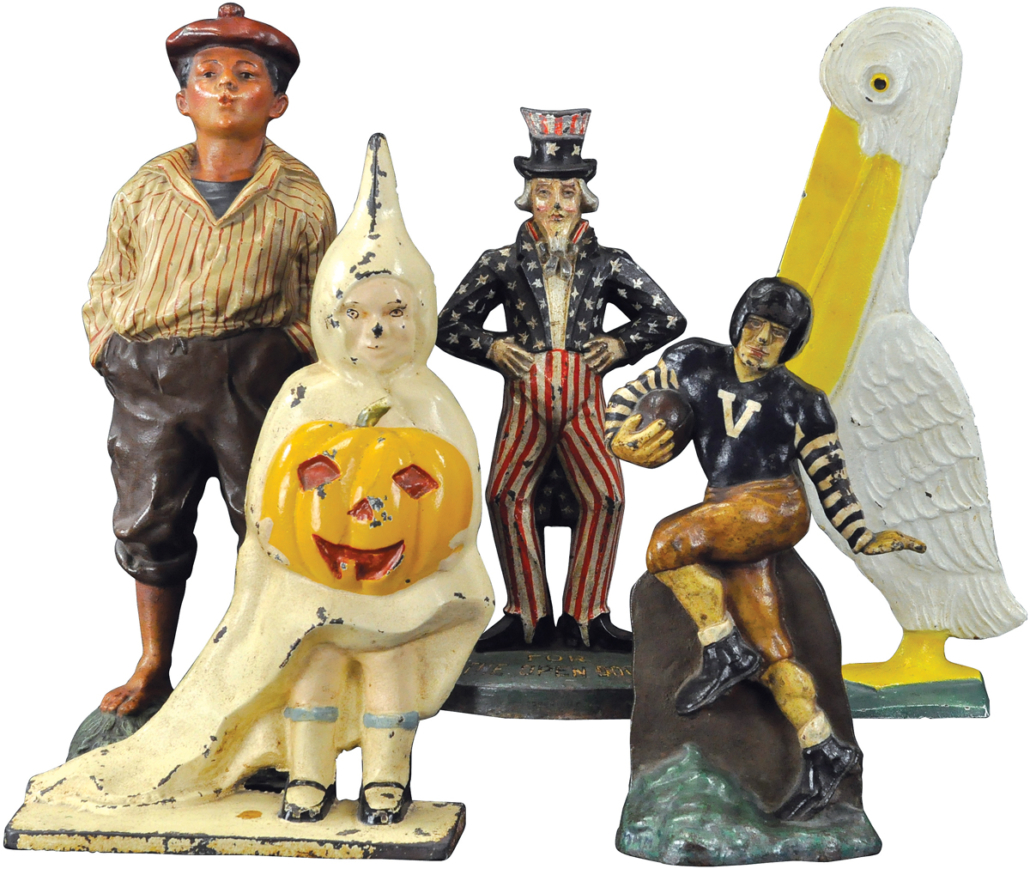 Of Bradley & Hubbard’s figural doorstops depicting people, Bertoia said “Whistling Jim” is one of the most sought after. This doorstop brings robust auction prices on those rare instances when an example with good paint crosses the block. The doorstop depicts a barefooted Huckleberry Finn-type whistling boy. A fine example retaining its rubber knobs and with premier provenance from Jeanne Bertoia’s own collection sold at Bertoia Auctions in March 2016 for $19,000 + the buyer’s premium.

Asked about the current market, Bertoia said, “The market is strong for the best quality pieces and Bradley & Hubbard falls right into that category.”

Steven Weiss, the “S” in RSL Auction Company, noted that because the rubber knobs often dried out and broke off over time, having examples with the knobs intact adds to their value. “I do like the large animal doorsteps. All of their material is popular and they have a high level of finish,” he said.

Besides doorstops, B&H was noted for its oil-burning lamps. Today, they are not particularly desirable, usually bringing only several hundred dollars each, eclipsed by the company’s later slag glass lamp fixtures that can bring a few thousand dollars apiece. Shortly after B&H’s sale to Parker, the company’s original factory in Connecticut burned down, making archival material scarce and valuable. A fourth-quarter 19th century illustrated trade catalog, for example, showing many of its kerosene fixtures, sold for $11,000 + the buyer’s premium in March 2019 at Jeffrey S. Evans & Associates.

Clocks were another B&H staple and the company’s series of blinking-eye cast-iron clocks (the eyes went up and down as the clock ticked) made circa late 1850s-1870s was very popular. Among these novelty clocks were a Continental Soldier, a recumbent Lion. and a Santa, which is arguably the rarest among them. Good Santa examples fetch from about $5,000 to nearly $10,000. 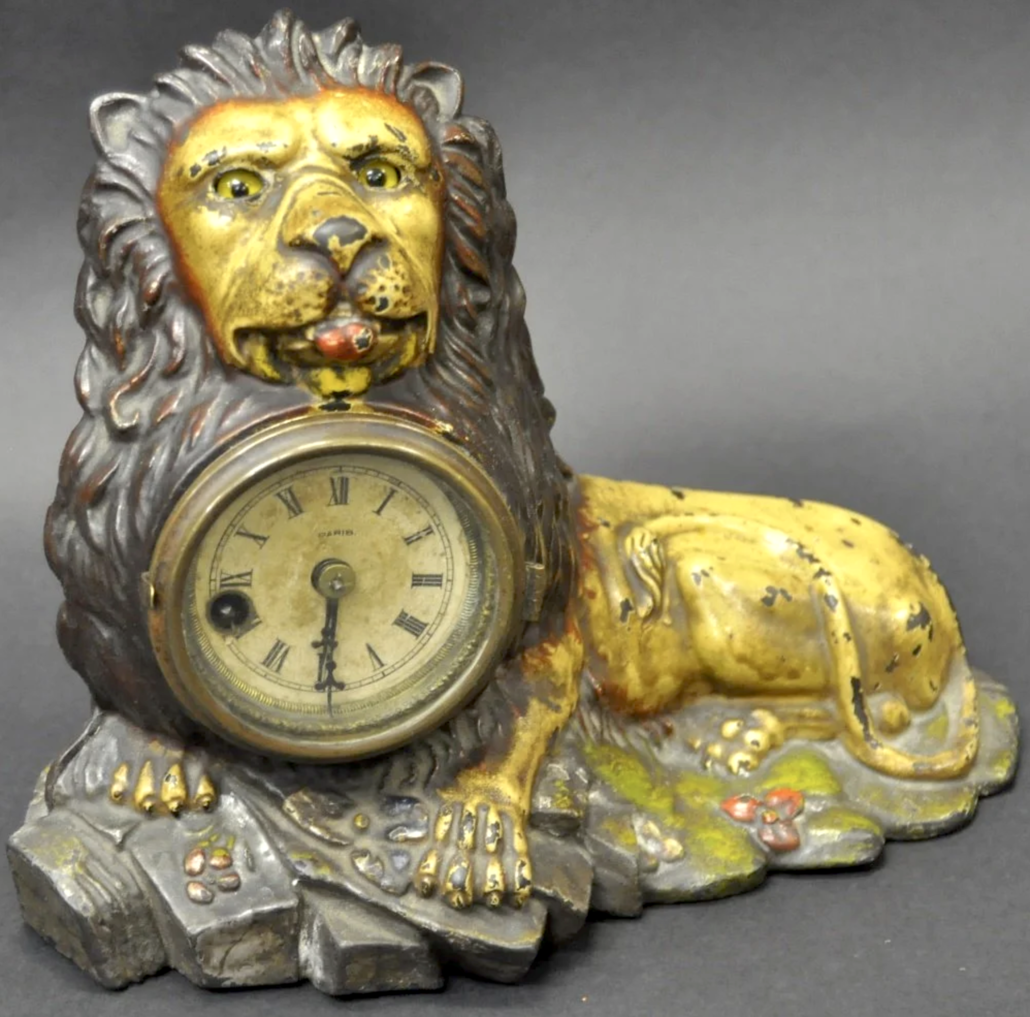 Bradley & Hubbard even got into making decorative tables and its embossed brass “Rocket” occasional table, inlaid with Longwy tiles, circa 1880-1885, was described as an important Aesthetic Movement accessory. One example was among many items by the company to be included in the Bard Graduate Center for Studies exhibition, “Brass Menagerie: Metalwork of the Aesthetic Movement,” in 2007.

A heavy hitter among metal goods, Bradley & Hubbard was renowned for its innovative and artistic use of metals in creating decorative items for the home that are still appreciated a century after they were made.